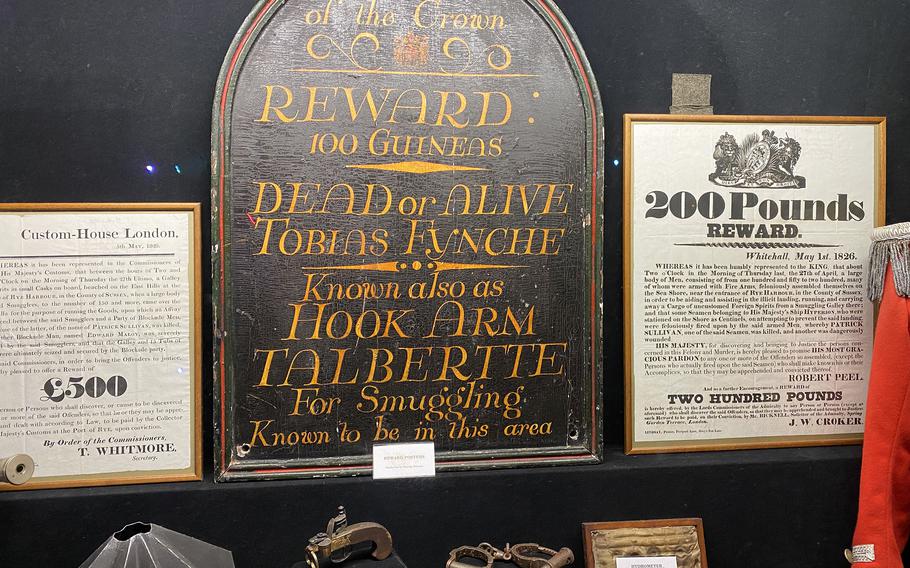 It's impossible to enter the coastal resort of Hastings in East Sussex, England, and not be schooled in its medieval history.

While I was buying our train tickets, posters reminded me that the town is close to the point at which the Normans invaded England in longboats and overthrew King Harold II in the gruesome Battle of Hastings in 1066. It's a defeat so firmly etched into British minds that local insurance providers have incorporated the date into their TV jingles.

On arriving in the town and entering an underpass, I saw a mosaic celebrating the town's heritage: charging knights, windsurfers, and a kite-flying mother and child. The images were rendered in brown and blue tiles, and looked as vivid as the bingo halls lining the town's seafront.

My girlfriend and I were visiting Hastings for some stone skimming, sea glass collecting and arcade death matches with our 7-year-old daughter. We were keen to see the town's recent regeneration.

Hastings wasn't always the marketable mix of tourist facilities and medieval lore it is today. As package holidays to the continent became the choice vacation of many Brits in the 1970s, English seaside resorts faced economic hardship.

A recent $34 million investment boost has rejuvenated the area's arts and culture scene. During our visit, tourists dashed between museums focused on true crime, crafting artificial flowers from velvet, and beach fishing. The last was once key to the area's economy, but it faces an uncertain future due to Brexit, which was favored by local voters in the 2016 referendum.

Despite it being the October offseason, the Hastings streets were sunny as we began exploring. Our daughter ran across the beach, and I got flashes of my childhood trips to the sea.

Because we live in East London, a visit to the southeast coast meant an 80-mile drive, and it felt like landing in a different continent. I can remember my dad teaching me how to trap crabs in a jar; picking up the neighboring army base on my transistor radio; and seeing so many ice cream flavors available on the beach that my neck would ache reading the menu that towered above me on the wall. Knowing I had the potential to make my daughter as excited as I had been felt like a big responsibility.

After checking in at our guesthouse - where the friendly receptionist was happy to take us in early and show us to our room atop a spiral staircase - we headed for our first destination: the "Old Town" of Hastings. Parts of the area date to the 8th century; today, its narrow cobbled streets are teeming with bubble tea boutiques, mussel cafes, Tudor houses and modern bistros with tables made from galvanized steel, their interiors lit by multicolored lanterns.

You can buy coffee and cake for about $7, or try one of the cocktails listed on brown paper menus: Whistling Gypsies, Hello Sailors.

We climbed the cliffs via side streets to reach the St. Clements Caves, formed around 14,000 B.C. and used as a lair by buccaneers in the 17th and 18th centuries. Today, they're explorable as part of the Smugglers Adventure. 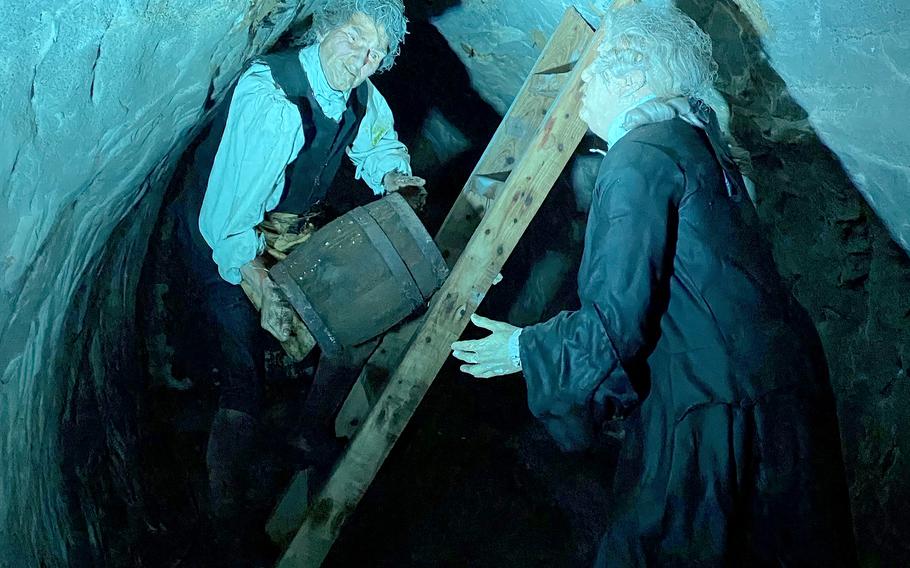 The Smugglers Adventure includes talking pirates and a tour of the St. Clements Caves, used as a lair by buccaneers in the 17th and 18th centuries. (George Bass/For The Washington Post)

A vampire at reception sold us passes - it was nearly Halloween - and we walked downhill through tunnels draped in luminous cobwebs that extended more than an acre underground. Blue spotlights gave the rock walls a lunar quality, while effigies of Joseph Golding, who dug into the caves in the 1820s, loomed from stone hollows like gargoyles.

We spent about an hour underground, posing by notices offering 100 guinea rewards (about $30,000 today) for the capture of smugglers dead or alive "by order of the Crown." Our daughter loved pushing the different language buttons on the talking pirates, as well as typing vowels into a reproduction Morse key to signal model Royal Navy boats.

After pizza on the seafront, we took an evening walk along the shoreline between lifeguard huts, which glowed white in the moonlight and seemed sinister with their flags lowered. Waves shattered on the beach, the sound blurring with traffic as we walked back to our guesthouse.

In the morning, we enjoyed breakfast at the Hanushka Coffee House among rows of old books, green glass reading lamps, and old-fashioned radios playing wartime swing tunes. We had planned to ride the funicular railway (cable cars) - the steepest in the United Kingdom - to the clifftops, but the West Hill Lift terminal was closed for maintenance.

A shame: I had traveled on one in my childhood and hoped to re-experience the cream-and-brown carriages from a bygone era. You can't enjoy their diagonal ascent and not feel a little like James Bond fighting Jaws at a high altitude in the 1979 film "Moonraker."

Instead, we took the steps, occasionally looking below us at beached trawlers with names such as "Christine" and "Moonshine." The wet sand beyond them shone like a lens; a little farther were the jutting remains of the old pier and its restored counterpart. Pieces of timber rose from the sea like fingers.

It was hard not to think of the infamous original Smalls Lighthouse, which was erected on oak pillars off Pembrokeshire, Wales, in the 1770s. One of its keepers had died on duty, and his trapped bunkmate had become unhinged. I had listened to a musical interpretation of their ordeal by the local experimental composer Plinth, and now couldn't get the album's striking cover art out of my head.

Eager for a more cheerful marine experience, we climbed down to Rock-a-Nore Road and visited the Blue Reef Aquarium. Halloween celebrations continued here with glow-in-the-dark skeletons positioned between tanks of gleaming mullet.

Our daughter loved seeing the creatures from the 2016 animated movie "Finding Dory" up close, and arriving at feeding time meant we got to look up from the observatory tunnel as sharks darted to and fro, chasing descending flakes of food. Side rooms offered salamanders, poison dart frogs and tarantulas in reassuringly sturdy terrariums. 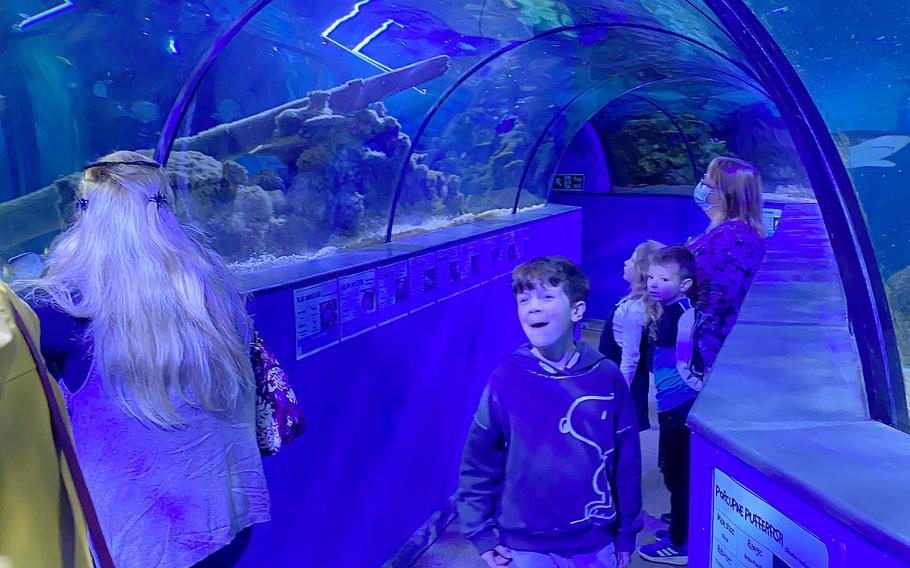 In the observation tunnel of the Blue Reef Aquarium’s biggest tropical tank, visitors can look up at blacktip reef sharks. (George Bass/For The Washington Post)

Outside, the free Shipwreck Museum housed a charming collection of artifacts from the hundreds of vessels wrecked in the English Channel. Visitors could peruse the 400-year-old salvaged cannons, French muskets from 1820, and 16th-century Portuguese maps (on which Australia wasn't depicted). Each exhibit had been recovered by local divers; patrons could test whether they would make efficient treasure hunters by trying to haul cargo on a reproduction rope pulley.

Returning to the seafront, we followed the music and cotton candy to the Flamingo amusement park. Our daughter picked her way through a mechanical funhouse, then fed twopenny coins into slot machines. Thirty years ago, I had visited a similar arcade at the nearby Camber Sands and blown all my pocket money (plus everything I could beg from my mom) on a RoboCop game and a light-gun shooting range. I was delighted to see the same gleeful abandonment in my child.

We left Hastings a few days before Nov. 5, or Guy Fawkes Night as it's known in Britain. Despite the popularity of Halloween, winter nights in the United Kingdom are dominated by communal bonfires commemorating the failure of the 1605 Gunpowder Plot to blow up the House of Lords and assassinate King James I. The nearby town of Lewes proudly boasts "Britain's most dangerous Guy Fawkes celebration."

Per tradition, the town bonfire had involved the burning of "Guys": effigies of Fawkes and unpopular media personalities. As we crossed Romney Marsh, I wondered how many burned Boris Johnsons would be found among the ashes.

A Georgian guesthouse located about a two-minute walk from the beach and five minutes from Hastings's railway station. WiFi, smart TV, private check-in and breakfast available. A family room with a sea view costs about $160 per night.

Underground tunnels that were used to conceal contraband now feature more than 70 life-size smuggler characters. Natural cave areas can be dark with uneven floors. Open daily 10 a.m. to 5 p.m. (In March, it closes at 4 p.m. and is closed every Tuesday.) Adults about $14, with family tickets (two adults and two kids ages 3 to 12) about $47.

An aquarium offering more than 250 sea species and 3,500 animals with emphasis on conservation promotion. Four daily live talks and feeding sessions. (Check website for information.) Open daily 10 a.m. to 5 p.m., with last entry at 4:30 p.m. Adult entry about $17, with family tickets about $58.