On-screen and off, the Shetland Islands have much scenery to savor 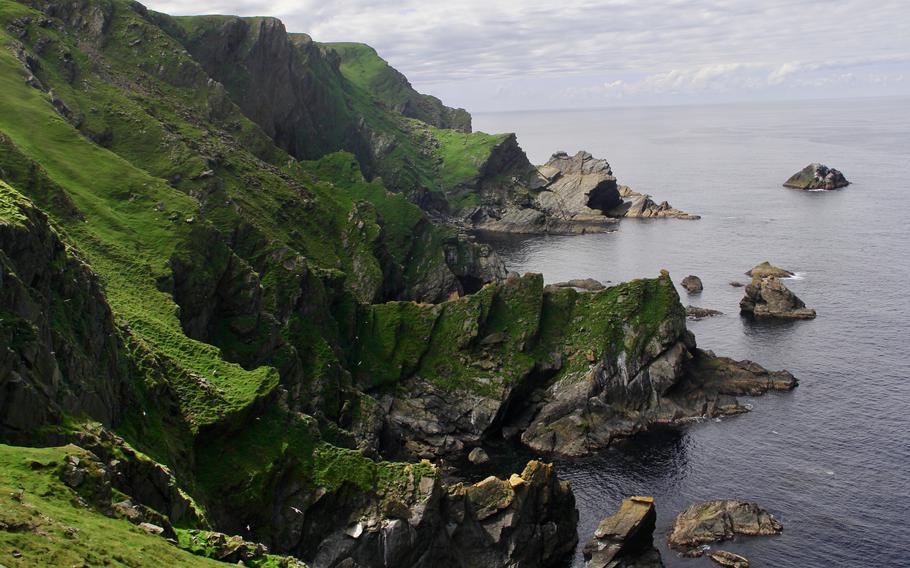 Vibrant grassy cliffs descend to the water in the Hermaness National Nature Reserve on Unst, which is closer to Norway than Edinburgh. (Karen Gardiner/For The Washington Post)

There's a moment in the latest season of the BBC crime drama "Shetland" when the camera pans slowly over the cliffs of Eshaness, in the north of the island of Mainland, Shetland. Volcanic cliffs drop into the indigo sea, its waves full-bodied and white-crested. Watching this shot, I quickly forgot the plot and imagined myself walking along those wind-battered cliffs, as I'd done so many times before.

I never used to watch "Shetland," which follows detective Jimmy Perez as he pursues murderers and trafficking rings on the subarctic Scottish archipelago. I didn't have to tune in for a taste of the islands when I lived relatively close and could visit whenever my schedule allowed. But when I'd post photos of Shetland scenes on social media, the comments invariably referenced the show. In response to a shot of a lodberrie (a stone house that extends over the sea) in Lerwick, the islands' capital, a friend exclaimed: "That's Jimmy Perez's house!" I was once informed that a stretch of golden sand that had caught my eye was at the center of a drug smuggling story line. 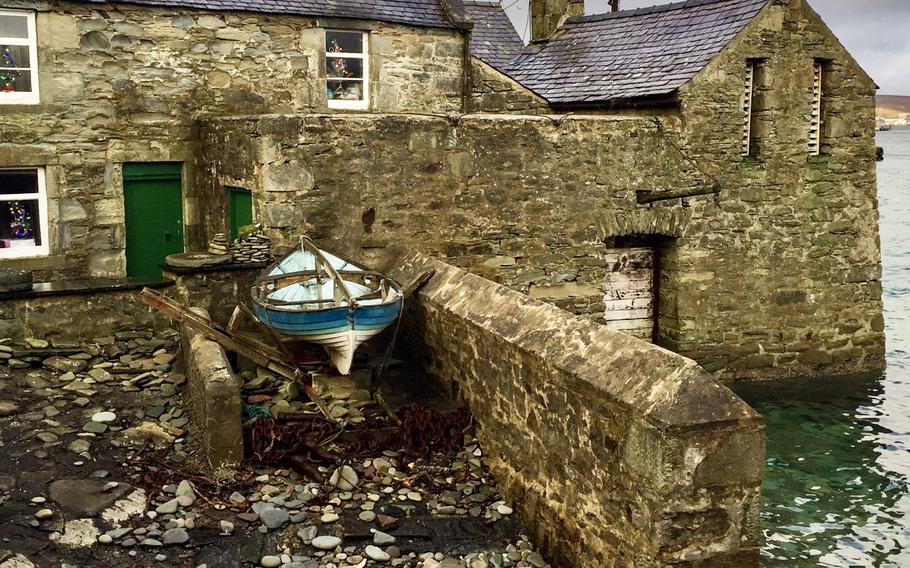 This lodberrie (a stone house that extends over the sea) on Lerwick’s waterfront will be familiar to “Shetland” viewers. (Karen Gardiner/For The Washington Post)

This winter, I'm not making my usual trip home to Scotland, so I'm watching "Shetland" on TV instead. Season 6 recently premiered in the United States on BritBox, but I'm working my way through the episodes from the beginning, hoping to see familiar landscapes.

Many visitors to Shetland have the reverse motivation: They yearn to see in person the landscapes they've only encountered on a television screen. The show, which does a good job of showing off its setting, has done wonders for tourism. Between 2013, when the show premiered, and 2019, leisure visitors to Shetland increased by 53%. A 2019 survey by VisitScotland, the national tourism association, found that 38% of leisure travelers to the islands mentioned television programs as a reason for visiting. Of those, 87% cited "Shetland."

"One Danish couple were inspired to travel to Shetland to get married on Eshaness cliffs," says Steve Mathieson, Shetland development manager at VisitScotland, "and American visitors have traveled over with the sole intention of finding parts as extras." 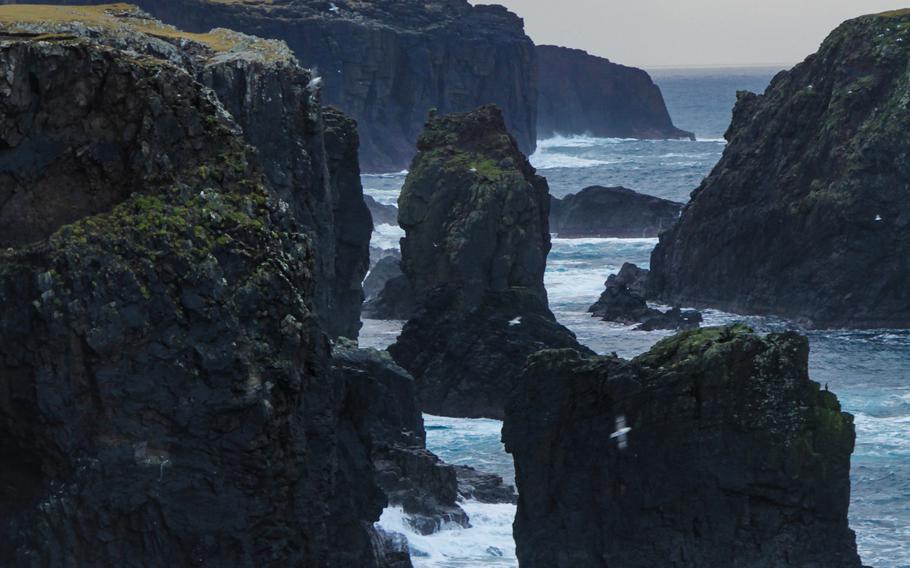 The Eshaness cliffs have been featured prominently in several “Shetland” episodes. (Karen Gardiner/For The Washington Post)

Writer Laurie Goodlad, who is also a tour guide, has written "Shetland"-themed self-guided tours for the islands' tourism board. She says the show has had a positive effect other than boosting tourism. "Ten years ago, if you said that you're from Shetland, people would have no idea where that was."

"Shetland" is based on the novels of Ann Cleeves, who, during the mid-'70s, worked on Fair Isle. The island is also the setting for her 2010 novel, "Blue Lightning," which was adapted for the show's second season. Twenty-four miles off Mainland, Fair Isle is Britain's most remote inhabited island and is widely known for its bird observatory, where Cleeves worked as a cook. (The observatory, which burned down in 2019, aims to reopen in spring 2023.)

In summer 2017, I followed in Cleeves's footsteps and got a short-term volunteer job at the observatory. In exchange for room and board, I worked in its little bar for a few hours each evening. The rest of the time I'd spend exploring the island. Although it only covers about three square miles, the coastline is so ragged with "geos" - deep clefts in cliffs - that walking the circumference takes longer than you might think. I'd stroll across sloping emerald moors and along the sharp edges of cliffs that swooped into foaming sea, then sit down and watch the puffins that surrounded me as they returned to their burrows after a day's fishing. Twice I saw pods of orcas. Once, they hunted in the harbor as I stood just feet away on the pier.

It was those two weeks on Fair Isle, filled with such moments of intimacy with nature, that sparked my love of the islands and inspired repeated visits around the archipelago.

Shetland has some 100 islands, of which 16 are inhabited. Mainland, the largest and most populated, is usually the center of the TV show's action. Its coastline, lashed by the North Sea and Atlantic Ocean for millennia, it is a place of dramatic beauty. Yet the island is understated; it's still undisturbed by mass tourism, and its beautiful beaches are often empty. Shetland was part of the kingdom of Norway from the 9th to 15th centuries, and the archipelago is steeped in Norse heritage; Shetland's Nordic cross flag flies everywhere, and streets have names such as King Haakon and King Harald. Mainland's archaeological gems include Jarlshof, which includes ruins from the Bronze, Iron, Pictish and Viking eras, and, just offshore, the some 2,000-year-old Broch of Mousa. But it's not stuck in the past: There's a thriving contemporary arts scene centered on the island's modern waterfront venue, Mareel.

Although there's much to see, I make repeated visits to soak in the elemental experience of just being there. There's often the chance of being waylaid by inclement weather, so it's a place I'm forced to be present, to pay attention and to practice a slow approach to travel. I could take one of the handful of daily flights to Shetland, but I've always preferred the state of suspension afforded by ferry travel, that sense of being neither here nor there. And so I go the long way, by the MV Hjaltland (the Old Norse name for Shetland) or Hrossey (Orkney) from Aberdeen. The journey takes 12 to 14 hours, and when I wake up in Shetland, I feel as if I've traveled far beyond northernmost Scotland.

Of course, Shetland's literary heritage extends beyond Cleeves' novels. "Dispecta est et Thule" - roughly meaning "Even Thule was seen" - wrote the historian Tacitus in the "Agricola," his A.D. 98 account of the Romans' arrival in Britain. The Romans believed that "Ultima Thule," first mentioned by the Greek explorer Pytheas, was an island beyond Britain that marked the edge of the known world. (Surmising that the mythical Thule was one of the Shetland islands, the town of Lerwick adopted the quotation as its motto.) In his 1870s book "Ultima Thule," explorer Richard Francis Burton suggested it was actually Foula, Shetland's most westerly island, that the Romans in Tacitus' account glimpsed.

Foula is home to some of Britain's highest cliffs, a large puffin colony, no shops and around 30 people. When I visited in that same summer of 2017, I was the only passenger on the fishing boat that heaves its way there over rough seas twice a week. My sea legs seemed to pass muster with the crew, who cheerfully shared stories of past passengers vomiting and curling up on the floor. The thickly bearded captain, Magnus, told me that, while Fair Isle is Britain's most remote island, Foula, with more tenuous links to the outside world, is its most isolated. When I arrived, the island was so shrouded in thick folds of mist it certainly felt like "The Edge of the World," as the director Michael Powell titled the 1937 film he shot there.

Had the Romans made it a little farther north, they'd have found the true end of Britain. On Unst, Shetland's northernmost inhabited island, I walked through its seabird-crowded Hermaness National Nature Reserve to the island's northernmost point. Just offshore, the uninhabited island of Muckle Flugga rose sheer out of the North Sea, topped with a lighthouse built by Thomas and David Stevenson, father and uncle of the writer Robert Louis, respectively. While Foula and Unst have yet to appear on "Shetland," legend has it that Unst inspired Stevenson's "Treasure Island." I can trace at least part of my wanderlust and love of remote islands to the book, so when I first visited this extreme place, closer to Norway than Edinburgh, I felt oddly at home.

The land mass on "Treasure Island's" map does bear a convincing similarity to Unst, but Stevenson never revealed the island's location, telling the Sydney Morning Herald only that "it is generally supposed to be in the West Indies." But perhaps even that vague direction was designed to outwit travelers. He added that he was "careful to give no indication as to its whereabouts for fear that there might be an undue rush toward it."

Stevenson's comments foreshadow the contemporary problem of overtourism, but perhaps he need not have worried. Shetland seems undisturbed by its small-screen fame. "We've not got the problem that you see in areas on mainland Scotland that have been used for filming locations and [become] overrun with visitors," Goodlad says. "Shetland is never going to get that," she says, simply because, with limited transportation links, it's not an easy place to reach.

"People have to really want to come here."