Heidelberg Castle at night and — finally — a photographer's triumph 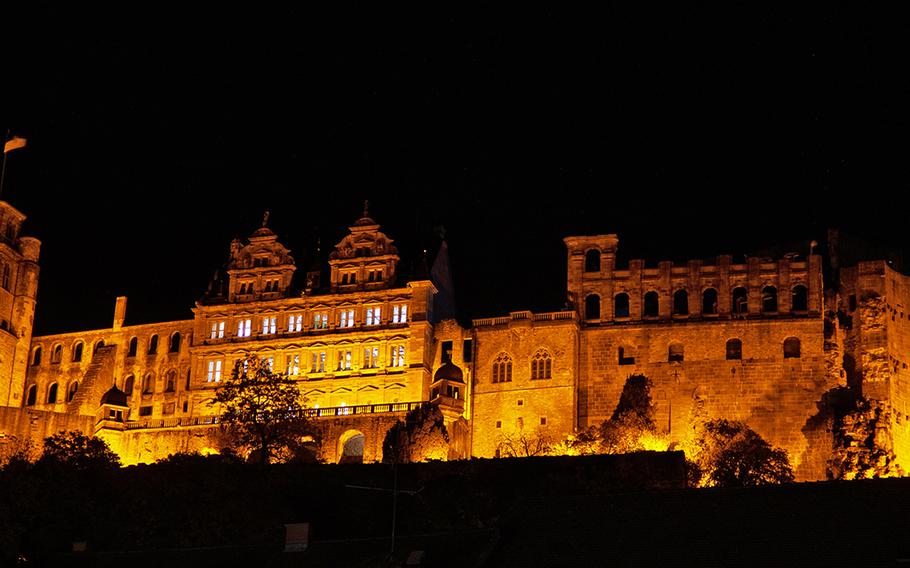 Heidelberg Castle, a photo the author has attempted for decades, at last, realized. (Alan Behr/TNS)

In their travels, some men quest to scale mountains, trek through deserts or shoot edible mammals. No matter how much they accomplish, there is always that experience left unlived that pulls the true adventurer forward. I, too, had such a goal. Being rather sedentary — the kind of traveler who views the offer of a restaurant that has not yet earned a Michelin star as a rugged dare — the top of my own bucket list was more modest: I wanted to snap a picture.

That is, I wanted a particular image: Heidelberg Castle by night (that is, Heidelberger Schloss bei Nacht).

I am German, and Heidelberg is one of the most picturesque and progressive cities that we offer the world — a major tourist destination, the home of a prominent university and a growing technology hub. It is not far from my family’s farmland along the Rhine, and so it was perhaps inevitable that I would join the Heidelberg Club International, which unites enthusiasts for the city from around the world. Several dozen of us were recently gathered with the personable and energetic lord mayor, Dr. Eckart Wuerzner, and his team. With it came my opportunity to nail that photograph.

Heidelberg Castle is a large ruin that sits above the city like a weathered crown. If you want to fantasize what a Renaissance castle might look like after centuries of lightning strikes and war, this would be it. At night, under brilliant floodlights, it sheds a golden glow over the city’s Old Town (Altstadt). Several times during the previous decades, I had come back to Heidelberg and stood at night at a town square, the Karlzplatz, to take a picture of the castle squatting imperiously above me — and had blown it on each occasion.

I have published many hundreds of color travel photographs; my black-and-white images have appeared in books and are collected in museums in the United States and Germany. I’m no Ansel Adams, but even still, you might think I could manage something as simple as getting a snapshot of an enormous subject that is not going to fidget while you set up your tripod or switch off the lights and go to sleep while you compute your exposure.

I had first tried just after graduating law school. Every shot was too dark or too light. And I would keep coming back through the ensuing decades to try and try again. Each time, I would miss the mark. My equipment would be wrong, or I would use it incorrectly. (Never travel with anything you need but have not tested thoroughly.) The shoot would be rained out. The exposure might be almost right; but as the saying goes, almost does not count except in horseshoes and hand grenades. As my grandmother might say, Oy Gewalt! (Think: “Oy vey,” only this time, you really mean it.)

So here I was in Heidelberg, returned to have it out with that castle once and for all. On the day of my big showdown, my group was heading up to the restaurant of another hotel, the Molkenkur, which is seated amid one of the verdant hills that surround the city. The ground was wet, but cloud cover was light and sporadic and the leaves were festive in their autumnal hues. The concierge at my hotel, the five-star Europaeischer Hof, confirmed that the restaurant was just under two miles distant — a mere six minutes by taxi, but for a New Yorker, as I have been for a long time, an easy walk. That is, if you happen to be in New York City.

Up I went, and up and up, ever higher, along winding roads, across hairpin turns, gnawing steeper footprints into the roadside. I could hear the crunch as cars that drove by shifted into lower gears to pull more power for the climb. I took off my Austrian top coat and kept going. I took off my Neapolitan sport jacket and kept going. I saw a set of stone steps — a shortcut through the wood. The steps led to a path and the path to a large fallen tree that blocked my way. Conveniently, someone had placed a smaller tree trunk perpendicular to the large one to make a ramp. I climbed the ramp, thanking mentally the person who made it — until I broke clean through the rotted wood and my right leg landed on the ground, impaled within.

By the time I got to the restaurant, late, I was sweatier than a marathon runner, and my leg was scraped. But I grabbed cloth and paper napkins, headed to the men’s room and improvised a solution with hand soap and my T-shirt, which stood in for the absent scrub brush. I rejoined the group, looking (and smelling) none the worse for my folly. 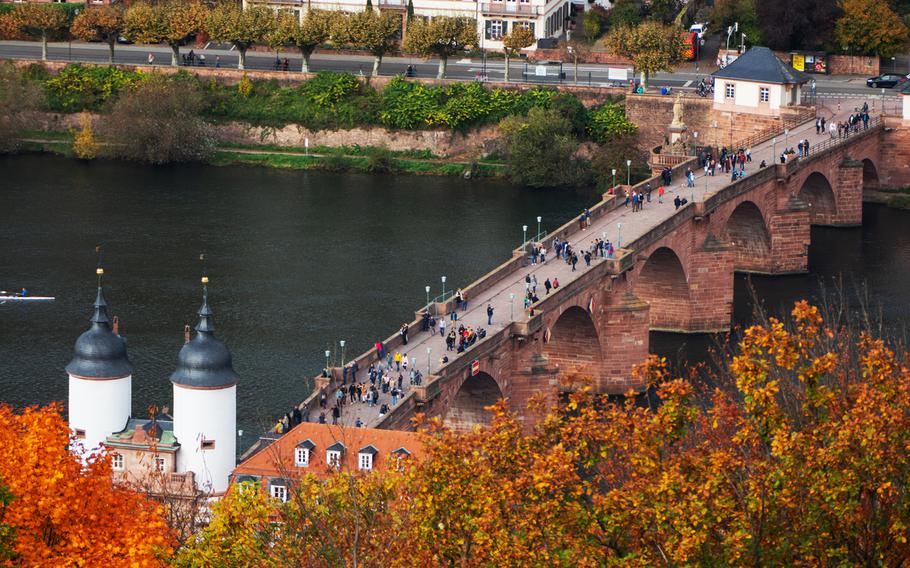 View of the Alte Bruecke from the terrace at the restaurant of the Molkenkur, a hotel on a hill above the Old Town, Heidelberg. (Alan Behr/TNS) 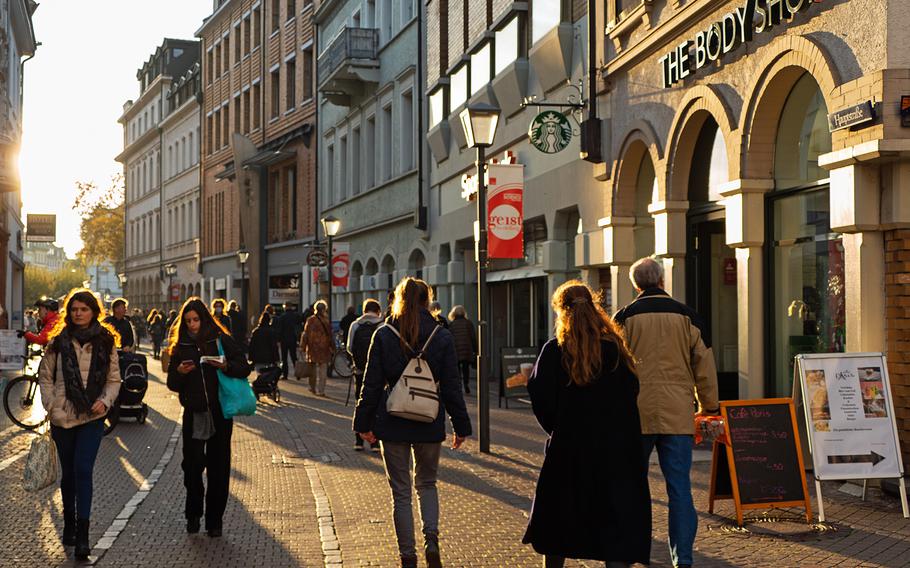 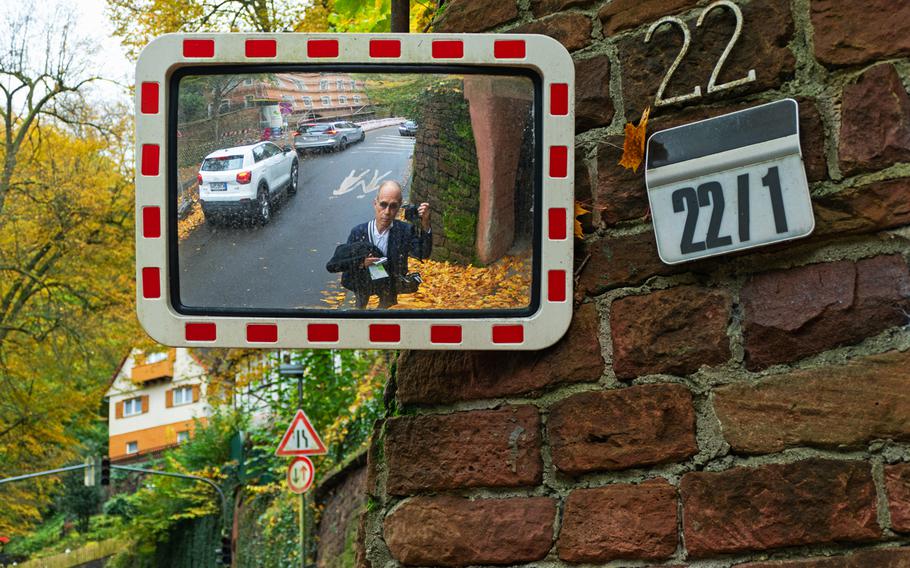 The author catches his breath going on the long and difficult walk up the Klingenteichstrasse to Molkenkur. (Alan Behr/TNS)

When I was offered a ride to dinner that night, however, I gladly accepted a lift. We were to have a traditional Heidelberg meal at a popular student pub, Zum Roten Ochsen, that has been in the same family for nearly 200 of its over 300 years of existence.

A light rain was falling. Before coming over this time, I had bought at Adorama (and tested) a lightweight tripod. My backpack held two cameras, lenses, extra batteries and cards. The Karlsplatz stood just paces away, taunting, goading, daring me to come back in and try that castle photo one last time.

Fortune favors the brave — or at least the persistent.

I set up the tripod. I confirmed that ambient light from the square and street would not be a factor. The clouds graciously cooperated, halting their drizzle. The falling leaves were not stirred into view by the wind.

Wonk alert: This part gets technical.

Gently waving flags would present no problem if I kept to modest time exposures at my cameras’ lowest ISO ratings. First, I set up a Leica M10 Monochrom, which, as its name indicates, has a black-and-white sensor. To bring the experience full circle, I mounted the same 90mm f2.8 Tele-Elmarit lens I had used the first time I had ever attempted the shot. The histogram confirmed an exposure of 7 seconds at f4 (ISO 160, EV-1). The rear screen confirmed success Now at last was the moment to get that color photograph. I switched to a Leica V-Lux (Typ 114), which has a zoom lens that I set that to a moderate wide-angle focal length. For this sensor, the optimal exposure proved to be 2 seconds at f3.2 (ISO 125, EV-2/3). Translation into plain English: nailed it twice over.

I returned to the pub grinning inwardly. In the back room, where our party was in progress, the waiters were readying the first course, the traditional and fragrant beef consomme (kraeftige Rinderbruehe) with noodles. I sat next to the lord mayor on one of the communal wooden tables that bore the carved-in names of generations of students Under a framed portrait of Otto von Bismarck, a pianist struck up “Lili Marleen” and then we all sang along to “I Lost my Heart in Heidelberg” (“Ich hab’ mein Herz in Heidelberg Verloren”). It is a pity I do not drink beer because I certainly deserved one.

I returned to New York City in triumph, along with my photographic souvenirs. I thought momentarily of framing one of the images and hanging it in my office. After some reflection, I decided that would feel like I was showing off. Instead, I went online and bought a framed portrait of Otto von Bismarck. The “Iron Chancellor” would have understood my particularly German form of persistence — but then again, so would almost any photographer.

Founded in 1865, it was one of the few grand hotels in Europe that is still family owned and run.

Restaurant in the Schlosshotel Molkenkur

Bring a camera and capture the view.

Show up hungry and if you can, bring your own pianist.