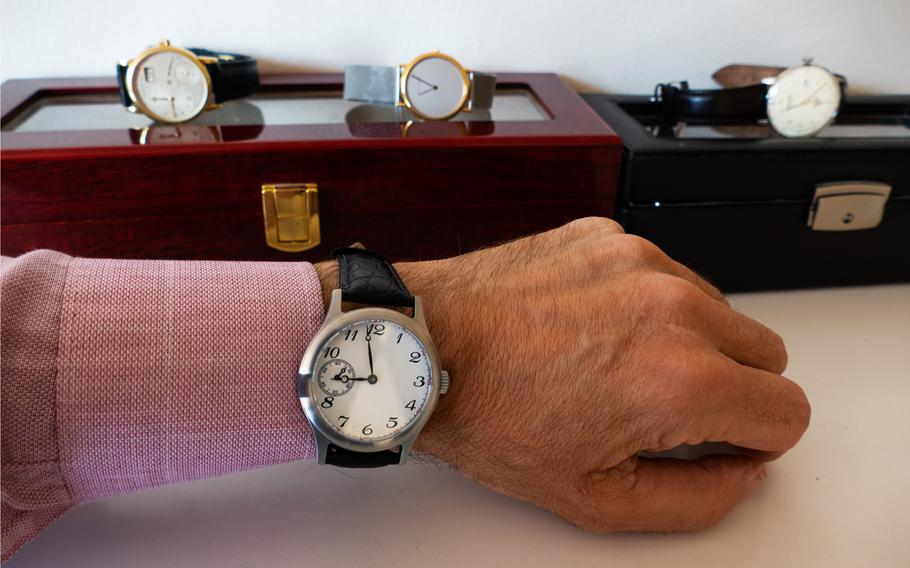 The author models the Initium watch he made in Geneva, Switzerland. (Alan Behr/TNS)

The Jet d’Eau, the grand fountain in Lake Geneva, sprayed upward, an aquatic unicorn horn arching high, cascading as white mist into blue autumnal water. The lake spread outside the windows of my suite at the Beau-Rivage. The mouettes, narrow boats in banana yellow and trimmed in fire-engine red, shuttled passengers from the near bank to the Old Town opposite. 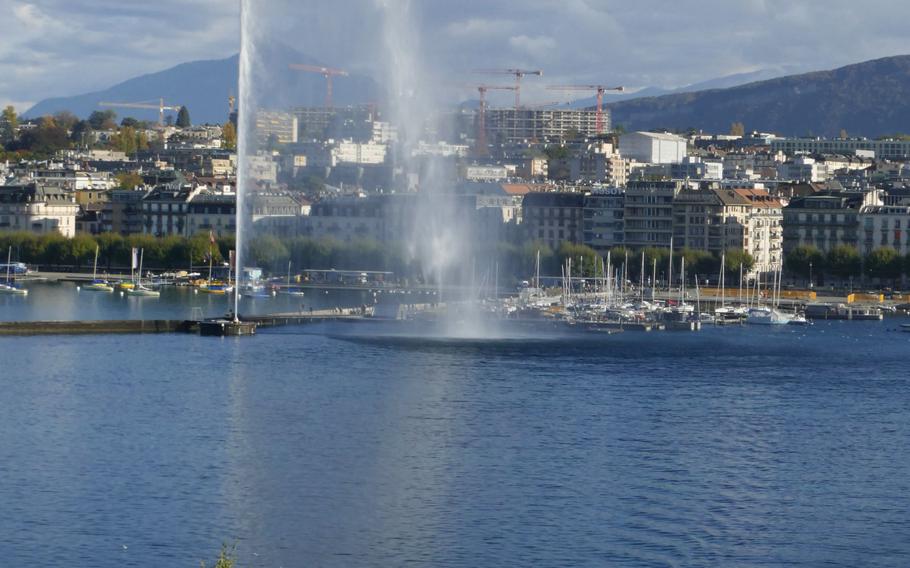 I had come to visit my firm’s office in Geneva to catch up with colleagues but also to complete the journey left undone by the pandemic. I had been booked to build my own Swiss watch just as everything had shut down, and I was finally back, ready to complete what I had set out to do seemingly a lifetime ago.

The Beau-Rivage could be a metaphor for what I think of Switzerland: sophisticated but unpretentious, fully equipped but not overdone — and everything works just as you would hope. Courtesy of an upgrade available to members of the Leaders Club (of The Leading Hotels of the World), I was rewarded with a full suite. It looked freshly renovated, and yet it had that old-world look that invites you home after a day’s work to take off your shoes, open a bottle of Valais wine and quietly iPad the night away. A button by my huge bed, which lorded over the suite from its mezzanine, opened and closed the skylight like the sunroof of a limousine.

When you stay at the right hotel, meetings come to you, and I spent the next three days holding court and offering coffee and drinks to a succession of local dignitaries with whom my firm has a working relationship. One, a well-traveled professional who delights in spa treatments as much as I enjoy tinkering with gadgets, wished me luck with the impending watchmaking, then added that she would remain at the hotel for a facial at what she reported, in her elegant French, to be La Suite Beaute Bellefontaine. Mme. S., as she wished to be known here, had wavy blond hair and expressive eyes, and she bore herself with that professional yet engaging rectitude that skilled European women will manage so well. She agreed to trade notes with me later in the evening for a he said/she said on Swiss knowhow.

A shuttle boat and a short walk later and I was at the small Initium Geneva branch, in the Old Town. Tamara Aziz, the general manager, introduced me to Fabiano Pericles, a master watchmaker originally from Brazil. Tamara was young, with long, dark hair. Part hostess, part supervisor, she was ready to serve as mom for this let’s-build-something-together playdate. Fabiano had black, curly hair and a close-cropped beard. Standing with his hands in the patch pockets of his white smock, he looked at me with patient eyes, giving the appearance of a surgical resident with a good bedside manner. 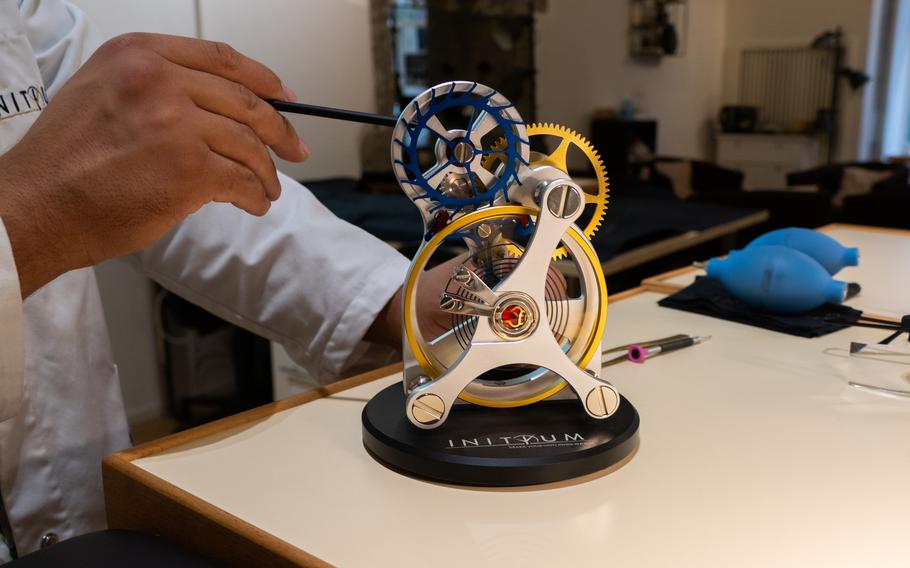 At Initium, Fabiano Pericles instructs with a working model of a watch movement. (Alan Behr/TNS)

The movement we would be using today as the ticking heart of my watch was the simple, 17-jewel ETA/Unitas caliber 6497. Swiss made and famously robust, its origins lie in a movement for pocket watches; it is today found within wristwatches from a variety of brands, including Tissot and Hamilton.

Fabiano introduced me to the history and practice of watchmaking and then opened numerous drawers to display more wristwatch components than there are grains of rice in a bento box. It was up to me to mix and match, with Tamara adding that no two watches made here have ever looked exactly alike.

My experience as the head of my firm’s Fashion and Luxury Goods Practice now kicked in, as I traced my eyes across the options, recognizing styles from Swiss watchmaking history. With what I was told was laudable decisiveness, I chose a relatively modest 42mm diameter case, a classic dial with black numerals on enameled white (in the style of the Patek Philippe Calatrava Officier series, such as Ref. 3960) and coordinating black Breguet-style hands (as used on that brand’s current Tradition, Classique and Heritage collections). After examining dozens of bands, I adventurously chose a crocodile-style leather one in black that was almost identical those on a half-dozen other watches I own.

That was easy enough, except at Initium there is a small hurdle in the fact that you actually have to assemble the thing yourself. As a boy, I built numerous model ships, and I assumed this would not be all that different — just more precise and, this time, I could not get away with having parts left over.

Back at the Beau Rivage, Mme S. readied herself for her facial in a purple-accented room bearing the whiff of candle wax by appearing in a bathrobe before Margarita, who was originally from Kiev. The multilingual Mme S. obliged by conversing with her in Russian, and they got on rather well. Once Margarita had gently broken it to Mme S. that she was challenged by dry skin, she set to work on her customer with a cocktail of cleansers, toners, moisturizers, scrubs and hyaluronic acid, each applied to the dial with careful massaging motions.

Back at Initium, Fabiano pressed us forward, his relaxed bearing fortified by the contemplative patience of the tutor who has already seen every form of ineptitude pass before him. We had now arrived at the phase where you have to calibrate the nascent timepiece. That involved connecting it to a hulking box known as a chromocomparator.

A signature virtue of the caliber 6497 movement is that it can be manually adjusted to a high level of accuracy. My task was now was to tap the index (regulator) — an arrow-shaped prong over the balance spring ever so gently with a stick. It was tap, tap on one side to make the movement go faster, tap, tap on the other to make it go slower, each time only to generate censorious readings on an electronic screen. So I went, back and forth, tapping this way until the movement went too fast and the other way until it went too slow. With kind intervention by Fabiano, I at last got it to operate within acceptable tolerances. This precision work was proving — how should I describe it? Exceedingly precise.

Over at the Beau Rivage, Mme S. was not exactly fretting under her peeling mask, which was applied for an Alpine, “fresh-off the mountains” look (rumored to be a particular favorite of Arab princesses staying at the hotel). The final step was a firming effect delivered by a caviar extract, which Mme S. said had the intended result of making her now soft and moist facial skin feel more taunt.

Not long after that, back in the Old Town, my watch was looking like it could keep time in style, at least after Fabiano replaced the dial I had somehow managed to scratch. I held my own fairly well during the cleaning phase, which I more or less aced by using similar tools and techniques as those I employ when cleaning my collection of similarly precise Leica lenses. That is: Be careful — really, really careful. 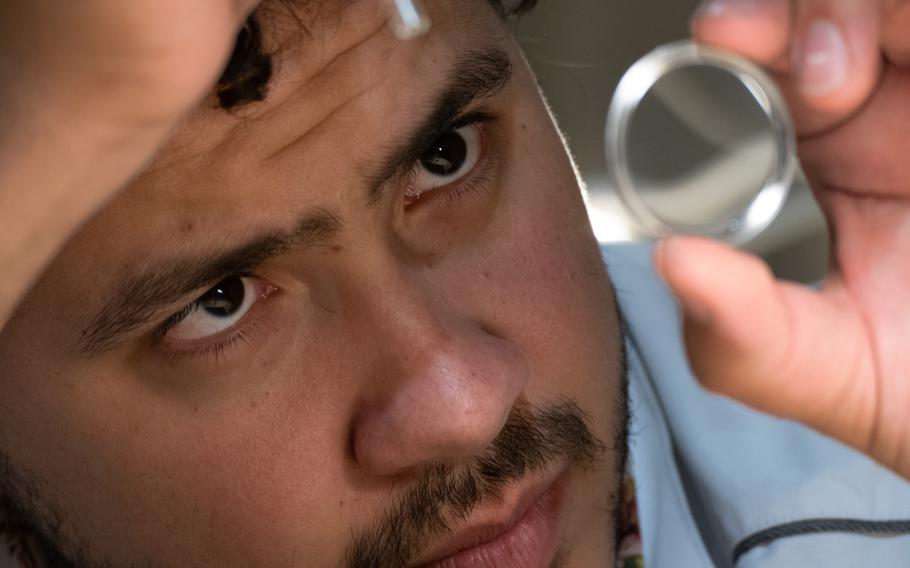 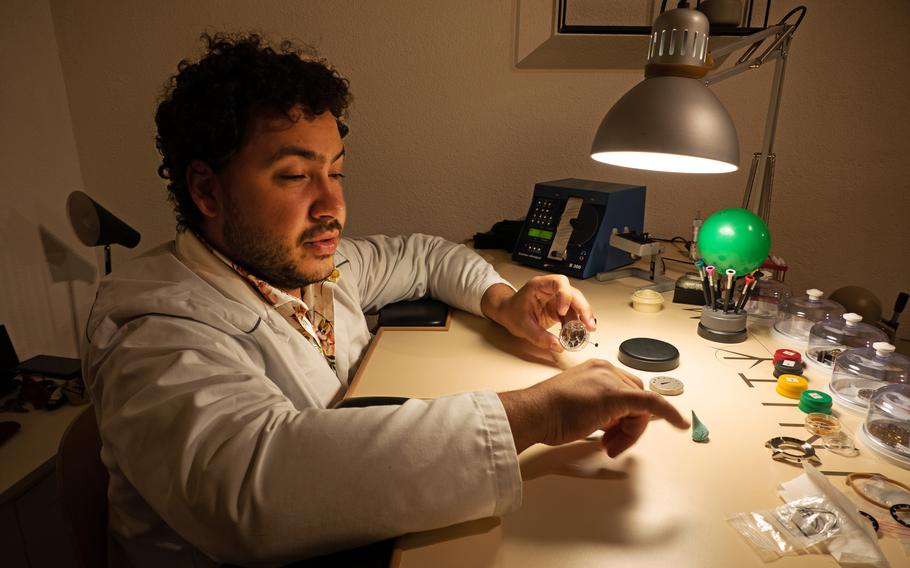 The task now was to file the winding stem down to 13.70 millimeters before inserting it into the watch and attaching the crown. “It can be as long as 13.73mm, but 13.69 is too short,” cautioned Fabiano.

Armed with a micrometer, wire cutters and declining self-confidence, I snipped the stem down to just over 14 millimeters. Fabiano gave me an India abrasive benchstone, which you use as a timepiece emery board. Every a few strokes, I would measure the length of the stem as it declined by fractions of a millimeter to 13.72mm. With one final effort, I resolved to apply exactly six more strokes, paused, then gave it my best.

“I think it is too short,” Fabiano speculated.

Undaunted, I put the stem into the micrometer: 13.70mm on the dot. The model ship builder had been vindicated at last.

My new watch looked terrific, and Tamara, Fabiano and I toasted this fine product of my marginal competence with a bottle of Sauvignon Blanc by Domain la Printaniere, a producer in the Geneva wine region.

The celebration continued that evening over dinner at Le Chat-Botte, the main restaurant at the Beau Rivage. It holds a Michelin star, and this evening, we were offered a seasonal menu chasse (game menu). You know you are getting authentic game meat when it includes a shotgun pellet. Restauranteurs may disagree, but I consider such a discovery, which I made in my serving of Irish woodcock breast (and carefully saved as a souvenir), to be reassuring as to authenticity. French game hare “a la royale” (with truffle sauce) followed. By the time Chef Dominique Gauthier paid his respects to our table, my party could only offer unanimous praise. 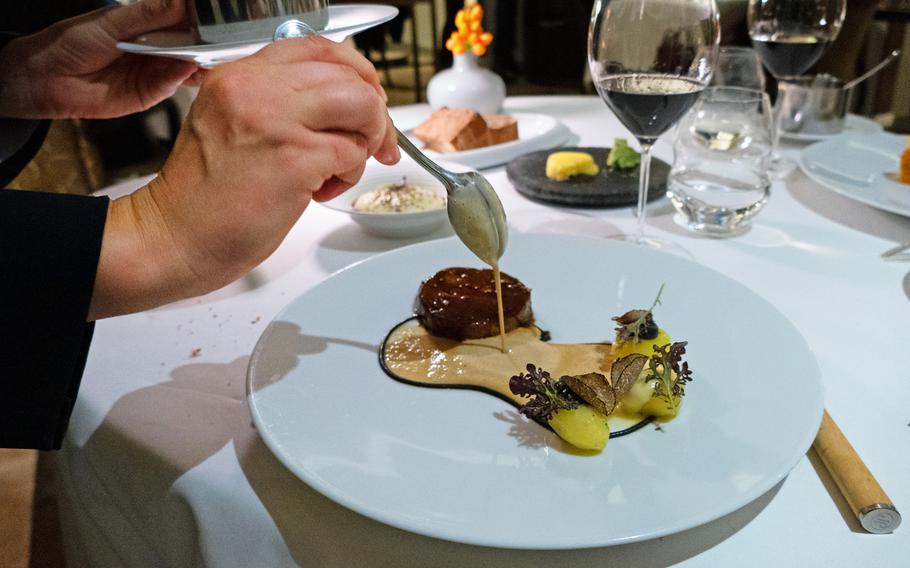 Le Chat-Botte, Michelin star restaurant at the Beau Rivage, pouring sauce over a selection from the game menu. (Alan Behr/TNS)

Mme S., seated opposite and looking radiant after her treatment, asked, “Was making the watch difficult?”

“A fun challenge,” I assured her, displaying it proudly. “Four hours on and it’s still ticking.”

I am now pleased to report, from my desk back in New York City, that it has earned a noble seat in my personal watch collection.