In the Scottish Highlands, a hiking dream fulfilled 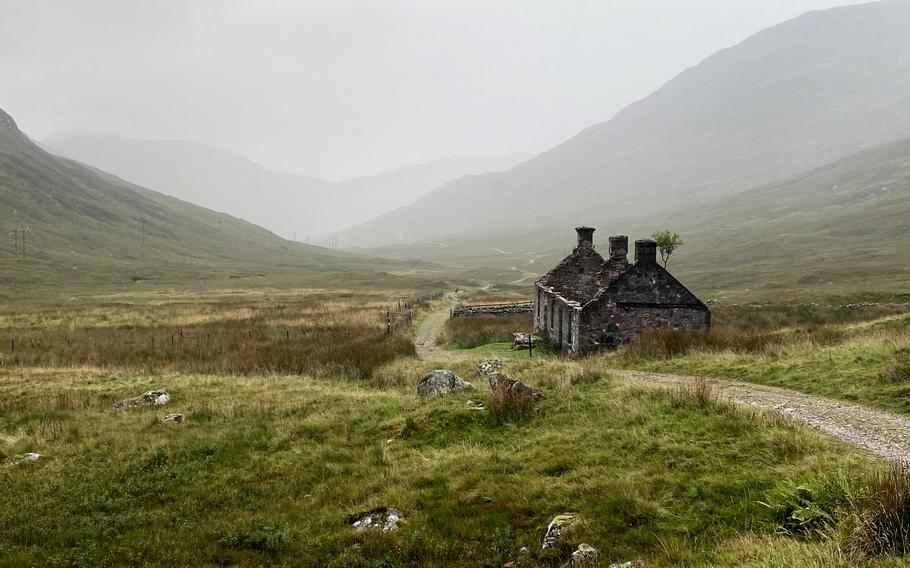 Years ago, when our kids were in preschool, my husband and I had what seemed like a crazy pipe dream: Once a year, we would take a multiday hike as a couple. Turns out it was a crazy pipe dream. At least at the time. But last year, as empty nesters, we resolved to finally make it happen, despite the additional challenges posed by the pandemic.

Several months ago, however, we sensed an opening when booking flights to the United Kingdom, where our young adult children live. We've grown familiar with the island country, a relationship that started long ago when we lived there as a family. Though well aware of the country's plentiful trails offering cozy inns and warm beds along the way, we had never had the chance to hike one.

This time, however, my husband and I plotted to disappear for four days to fulfill this old hiking dream. We decided on the legendary West Highland Way, which extends from Milngavie to Fort William in the Scottish Highlands, and we committed to walking the northern half of the approximately 100-mile trail known for its dramatic scenery.

This would be our first thru-hike, stopping each night and continuing in the same direction the following morning. We were also committed to carrying everything we needed on our backs rather than using a baggage transfer service. Having the right equipment was critical, and REI helped with my backpack fitting, so I wasn't overloaded. Planning our dates and possible route, we leaned heavily on the recommended itinerary to lock in lodging for nearly 45 miles of hiking.

So it was that on a fine day in mid-September, with a bit of nervous energy, we began, arriving in Tyndrum by train. We'd read that, after Tyndrum, you couldn't buy provisions for 28 miles, and my husband snapped up dozens of energy bars at a nearby convenience store to add to my stash of apricots and almonds.

Without any fanfare, we started the iconic trail marked with its hallmark symbol resembling the thistle, Scotland's national flower, walking seven miles along the relatively flat path toward the Bridge of Orchy. The countryside was hilly, and we occasionally passed flocks of grazing sheep who, alarmed, would look up and stare suspiciously at us. A brief encounter with a group of Highland cattle was the only time we stopped. At the foot of a bridge, a farmer vigorously waving his arms yelled something about moving his cows and told us to stand back, explaining, "They're skittish!" while jabbing his thumb for us to move away toward a stone wall. The herd thundered across the narrow bridge we had crossed moments earlier. 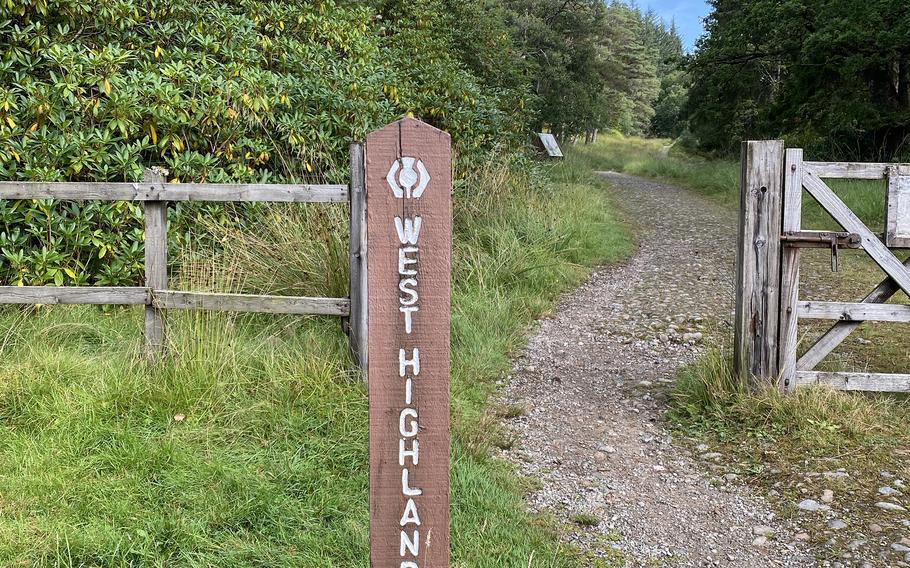 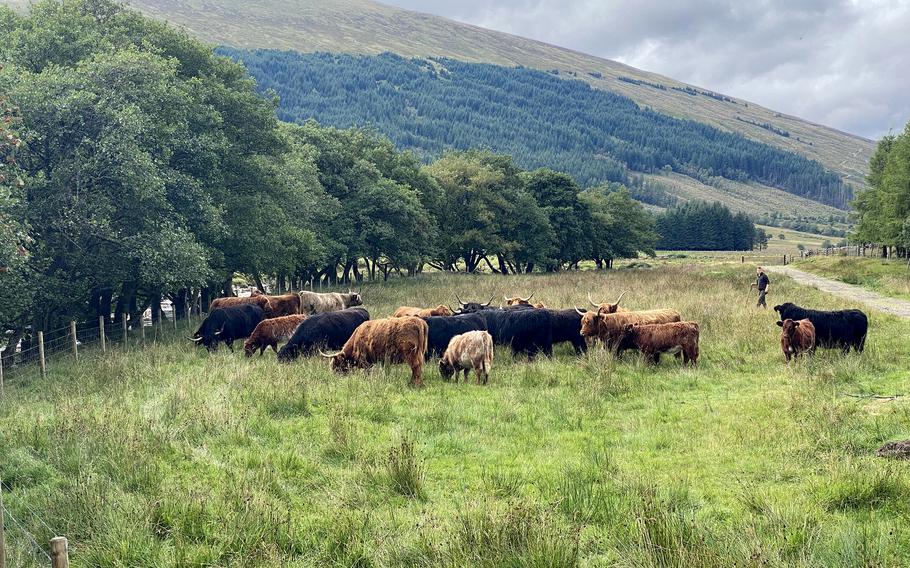 Our hotel sat glowing in the sun along a sleepy stretch of A82, a welcome sight with picnic tables scattered out front and people having drinks and soaking up what was left of an exceptionally nice day. Inveroran Hotel is where the official itinerary suggests stopping, but because it was fully booked, we ended up at the Bridge of Orchy Hotel. Hikers milled about, stretching out hamstrings and doing quick kicks to loosen up, while others sat serenely and sipped beers. We were distracted by clouds of gnats, or were they the infamous midges of the area? With smug satisfaction, I whipped out the repellent we had brought as part of our preparedness plan. 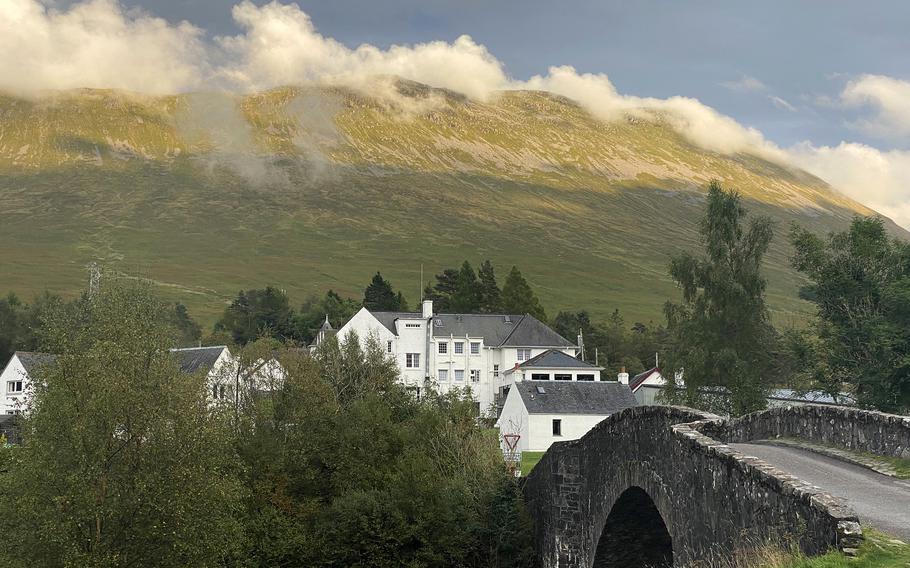 The author and her husband stayed at the Bridge of Orchy Hotel, a seven-mile walk from Tyndrum. (Kathryn Streeter/The Washington Post)

At the hotel's insistence, we had made dinner and breakfast reservations, something our other accommodations recommended, too. Because there are few places to stay along the trail, hotels have to plan and space out diners. Feeling celebratory, we split a bottle of wine at dinner to toast our first successful day. When I asked our server, Ramona from Austria, whether we'd been visited by midges on the patio hours before, she hesitated, saying it's the end of the season and they would be gone in a matter of days because of cooling temperatures. The identity of the bugs would remain unclear, but Ramona's insight may explain why we never had reason to use the spray again.

Stuffed with a full Scottish breakfast of bacon, sausage, eggs, black pudding, potato scone, and roasted mushrooms and tomatoes, we left by 9 a.m. with our preordered sack lunches, yet another aspect of life on the trail that we quickly internalized. The approximately 13 miles to Kingshouse Hotel, an isolated cluster of structures about 12 miles east of Glencoe, traversed old military and "drove roads" - routes once used by Highlanders to drive cattle and sheep to market - into the vast, boggy wilderness of Rannoch Moor, as seen in the "Outlander" series. We chatted with a woman from Oxford walking solo who was exuberant over the stunning scenery. She said we should strive to be the slowest, not the fastest, hikers to appreciate the wild beauty. And we did, stopping often to take photos and revel in the haunting unspoiled expanse.

Wispy clouds hovered over random giant boulders and small hills that punctuated the eerie landscape, so desolate and untamed. Intermittent drizzle added to the mystical setting, and we stopped to throw on another layer and secure rain covers over our backpacks. Despite our hampered visibility, the path was easy to follow, and thankfully there was no need to make use of the compass we'd brought.

We glimpsed the Glencoe ski center in the distance as we approached the Kingshouse Hotel. The lounge's floor-to-ceiling windows offered views of one of Scotland's famous Munros, which my husband quipped resembled a giant Hershey's Kiss. The imposing Buachaille Etive Mor, translated as "the Great Herdsman of Etive," anchors Glen Etive on one side with the lonely single-track road made famous in the James Bond movie "Skyfall." On its other side lies Glencoe, site of the 1692 massacre of Clan MacDonald, in which the neighboring Clan Campbell, acting under orders of the crown, brutally slaughtered 38 fellow Highlanders.

It was once a tiny remote outpost for hikers, but today, the luxurious hotel spoils you, though it also offers a shabby-chic bunkhouse and facilities for those camping nearby. In the hotel's main bathroom, I bumped into a woman mopping her face and heading out to set up camp for the night. (In Scotland, you're allowed to camp most anywhere, even on the grounds of a hotel; it's called "wild camping.")

We moved forward as a loose community of hikers, and a comfortable rhythm ensued. During the morning rush, we found ourselves at breakfast with fellow hikers who would leave in a trickle, eventually dotting the trail. When things got steep was where we all found ourselves bunched up, as we did the following day ascending the Devil's Staircase on our nine-mile trek to Kinlochleven. The climb slowed everyone down, with many pausing to catch their breath. At the top, we were surrounded by dozens of hikers. I smelled coffee and noticed a cheery group of guys clustered around a small pop-up stove brewing some. 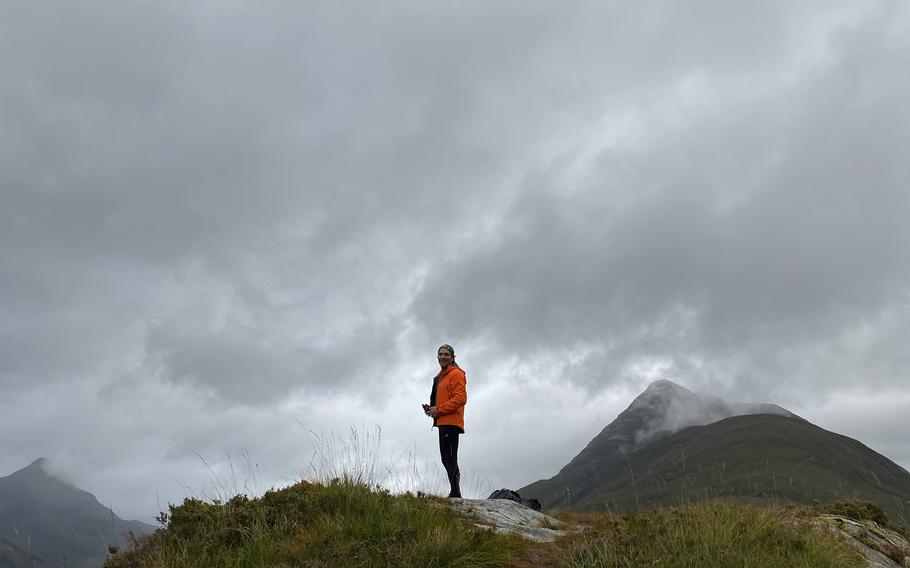 Friendly brief exchanges between hikers were the norm as inevitably we would pass each other. For instance, we walked past a father-son duo speaking rapid-fire German taking a break, only to be overtaken when we stopped. These exchanges amounted to remarks about the trail or conditions of the day or, in many cases, a nod, grunt or quick "cheerio" or "hiya."

After the dam high above Kinlochleven, we descended through the trees into the town on Loch Leven. We had time for a quick happy-hour drink at the Bothy Bar on the lake while waiting to check into our bed-and-breakfast. Stephen, who runs the immaculate Bank House with his wife, Jayne, greeted us. The guesthouse occupies the town's original bank and is one of the few brick buildings in town.

We were up early for our final and longest day. The forecast promised steady drizzle, and we reviewed our 15-mile route using the apps Strava and Komoot. Stephen floated about serving breakfast in his apron emblazoned with, "A balanced diet is a glass of wine in each hand," and assured us that, after the initial climb, it would be easy going. He was right, but so was the forecast; it was the sloppiest day we experienced. Midday, we huddled hilariously against a mossy embankment for lunch. A hiker passing us pointed in the direction of Scotland's highest peak, Ben Nevis, shrouded in clouds: "Is that who I think it is?" This time around, we hadn't caught a glimpse of the great mountain, except for her base. Fields of rosebay willow herb, statuesque and hazy pink, put a pop of color into the otherwise gray day.

As we entered Fort William, signage for the trail vanished. Using maps on our phones, we found our way to where the trail officially ends at the statue "Man With Sore Feet." In good spirits but thoroughly soaked, we dimly recognized a couple of other bedraggled hikers. We agreed to snap obligatory photos of each other by the statue before parting ways and seeking shelter.

This 96-mile trail officially starts in Milngavie and ends in Fort William, though it can be hiked in either direction. No registration required. Reserving overnight lodging well in advance is highly recommended, because options are limited. West Highland Way offers passports that can be stamped at participating businesses. Free.