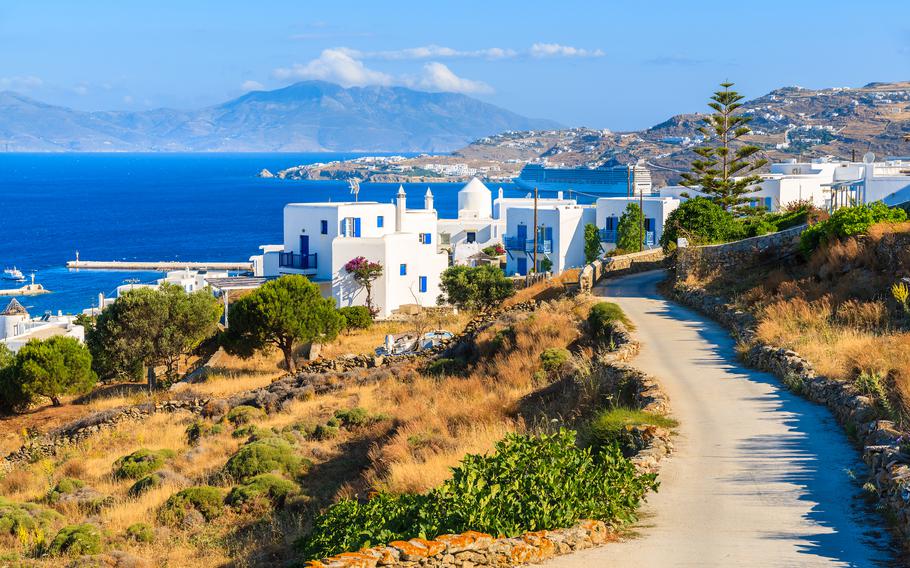 Road to Mykonos port, Mykonos island, Greece. The roads are narrow. The hills are steep and driving can be a challenge, but that's part of the adventure. (iStock )

“You are certain you can drive a stick shift?” asked Aldo as we sat on the veranda outside the lobby of my hotel in Mykonos. A tall, mustachioed Albanian who clearly understood cars, Aldo gave me the keys to a tiny Fiat Panda in fire-engine red. He stared at me as if he had instead handed over a revolver and asked if I knew how to engage the safety.

“I learned on a Triumph,” I assured him, recalling the sporty British convertible of my youth.

He cautiously handed over the key to my rental car from Assimomitis, a local company, adding, “Turn off the air conditioning before going up a steep hill.”

My hotel, the new and spacious five-star Amazon Resort & Spa, stretched across a hillside on the southwest coast of the island, just off Agios Ioannis Beach. The only way out of the steep driveway was up, and I got near the top in Panda Red before turning off the air conditioner and trying again. This time I was successful.

This was my third visit to the Greek island of Mykonos. Although long acknowledged as the queen of the Cyclades island group, during my last visits, in the 1980s, a capricious and disorganized hospitality infrastructure demonstrated that Mykonos had not yet hitched a ride on the international luxury travel express. My introduction to the island had been arrival at the modest four-star hotel I had been told was the premier spot, only to find it had lost my reservation. I was exiled to a simple bed and breakfast nearby.

I returned six years later to see things still much the same; indeed, half the fun on both trips was trying to find a restaurant or taverna meal that was not criminally awful.

To reach any of the prized beaches on the southern end of the island in those days, you needed to take a weathered boat inevitably captained by a grizzled, aging mariner. Due to some bad advice, the first time I tried it, the skipper dropped me off at Super Paradise Beach — at that time the island’s gay nude beach. Swimming sans culottes has been Greek since before they began the Olympics, in 776 BC, but with my trunks kept on, I was an ignored anomaly during a curiously agreeable afternoon.

How times have changed. All island buildings have the same blocky, white-stucco look, offering both charm and a marvelous architectural uniformity. The white blocks pop up from the arid-brown landscape, punctuating the hillsides like milestones along narrow, undulating roads.

Mykonos Town now looked rather as it had before, with main narrow pedestrian paths for streets. The difference is they were now filled with good restaurants serving fine Greek wines. There were still modest local shops, but there was also a Gucci, a Kiton and plenty more luxury names you know. New white buildings, some quite large and elegant, populated back hills previously inhabited by goats.

For my first drive, I took Panda Red to the center of the island, to see the Monastery of Panagia Tourliani. Tour buses circled the plaza outside, and cruise-ship day trippers crowded into its narrow church in relays. It was like trying to obtain a spiritual epiphany in a shopping mall the day before Christmas.

From there, Panda Red and I made it to the lighthouse, on the northwest tip of the island. Isolated, desolate and still, it looked like an artifact from a disused missile base, but the promontory on which it stood gave a brilliant view of the town and its harbors, in the distance.

I next steered toward what GPS said was the entrance to a northern beach, Panormos, but ended up in a bracken-sided path so steep, even with the A/C off, Red Panda strained to climb to freedom, succeeding only on the second try. Finally arriving at my destination, and eschewing valet parking to shield Panda Red from damage, I came to the beach entrance, which was effectively blocked by the Principote Beach Club. Filled to capacity with chic young people in designer labels, I could have sworn it was St. Barts during a Vogue cover shoot.

Even if I had wanted to pay dearly to rent a sunbed (chaise lounge), it was not possible because I had failed to make a reservation in time. I followed instructions through a desolate path to the free side of the strand, ending up in a down-market version of what I had remembered from my past visits.

Dinner was at the Amazon, at an open-air table in its Flavor restaurant, above the long infinity pool, served, serendipitously, by another conscientious Albanian named Aldo. The hotel’s kitchen was consistently fine and a good value.

During the night, someone had uncovered a utility access panel in front of Panda Red’s right front wheel — which fell into the hole the moment I released the parking brake. A huge man from the rental car company now appeared, only to tell me glumly that I was wrong: it was not possible to push the car free. I asked him to get into the driver’s seat. After summoning three hearty men from the hotel staff, with one in front, two on the right side and me opposite, the driver threw the car into reverse as I yelled, “Push, men, push!” until Panda Red was freed, with no signs of damage.

I told a young man from the hotel that, from now on, I would be grateful if they valet parked the vehicle. Another asked helpfully, “Would you like to keep your parking space, sir?”

After consulting the Oracle at Delphi (she now has an app), I pledged to confine my driving to very short trips, resulting in an unexpectedly delightful day of luxury, in the new Mykonos manner. The Amazon primed me with a lovely, seaside breakfast. From there, I drove a handful of minutes to the other side of the beach, arriving at the small and very exclusive Bill & Coo Coast Suites, where refined minimalism was a calming motif throughout.

I finally got to rest on a beach sunbed, dutifully attended by the staff. I interrupted that only for lunch at the Beefbar Mykonos open-air restaurant, which offered a Mediterranean take on the steakhouse, such as my sophisticated pasta al Kobe beef — meat ravioli accented with black truffles.

Dinner was at the Katikies Mykonos, across the street. The chef at its Mikrasia Restaurant, Aggelos Bakopoulos, served a special signature menu (literally: as a souvenir, I got a signed copy) at outdoor tables set into beach sand. I particularly enjoyed his seabass a la polita; surprisingly sweet, the fish filet was served inside a foaming sauce with vegetables. I could watch the sun settle into the sea, the island turning blue and falling into a regal blackness for the night.

Even a short drive back at night was a challenge. Roads twisted like confetti in a windstorm, and local drivers passed me with inches to spare if I showed the poor good sense to obey speed limits.

The southern beaches were close enough for me to hazard a return visit. New roads now reached them, and they undulated beneath Panda Red like roller coaster tracks. I braked for an insouciant goat and made it back to Super Paradise Beach, which resembled its prior self only in name. Opulent and well-attended, with sunbeds and Champagne available as you pleased, it was both sophisticated and suitable for family visits.

The same was true for Agrari, the next beach over, where I got a sunbed in an outlying cluster for €15 ($18) — by far the cheapest I had seen. A diligent, somewhat forlorn man served inexpensive comfort food.

I set off by foot for the opposite end of the beach, climbing a hill spiked with jagged rocks, facing Elia Beach, just to the east. Below the crest, however, was a small, sandy alcove. Although it was not marked on my tourist map, it held over three dozen men, nearly all of them naked, crowded together on beach towels. Many were young and quite well-built; I figured: I’m older and lately bald, but I’ve kept well-tempered abs — surely that’s an entry visa to the domain of Poseidon.

Since my last visits, haven’t I learned that to travel well you must reach past your comfort zone? I went down the single, narrow path to the beach, not exactly saying, “Pardon me, straight guy coming through,” but so obviously giving that impression, I was once again politely ignored by all.

To close the circle on my first experience at Super Paradise Beach, so long ago, I joined the other guys for a proper Grecian skinny dip. The water was perfect — the right temperature and rolling in a gentle way that made it feel more like an open-air bath than a trip to the beach.

When it was at last time to leave Mykonos, Aldo came to collect Panda Red. He quietly and carefully documented four areas of light damage, probably caused in parking lots or by roadside bracken, handing me a bill for €600. (I was later told that my experience of Mykonos driving was not uncommon.)

Aldo offered to drive me to the ferry in a company SUV. Depositing me there, he left me with some good advice: “Next time, please, take taxis.”

Nearby restaurants: Gourmet dining at Katikies Mykonos and Bill & Coo Coast Suites, also at Agios Ioannis. Book from North America through Leading Hotels of the World, 1-800-223-6800.