Paddle through the past in Dubrovnik, Croatia 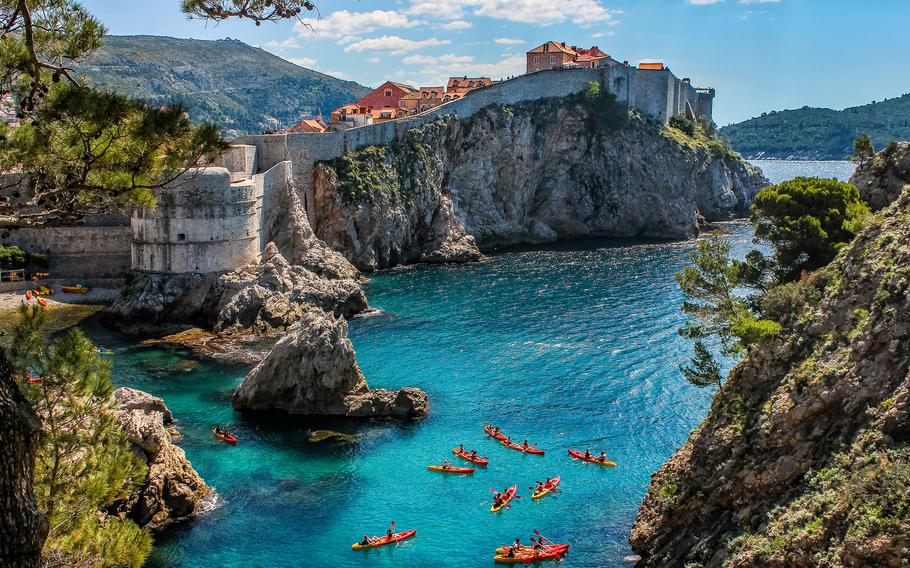 Just off the Dalmatian coast, I stop paddling for a moment in the heat and reach for my water bottle. Up ahead, my guide, Matej, a good-humored young Croatian with an enthusiasm for local history, waves me forward. We have left behind the usual tourist spots and cafes of the UNESCO World Heritage city of Dubrovnik and instead are heading - for me, at least - into uncharted waters.

As Matej glides ahead, I let my kayak drift in the clear, calm sea and look across the water toward the ancient defensive walls, towers and turrets of Dubrovnik.

The day before, I had walked more than a mile atop those stone ramparts, built between the 12th and 17th centuries and encircling the Old City. As I wound my way around and up and down stairways and across battlements, I could see up close contemporary residential life. Just over the city walls, I spotted schoolyards, laundry hanging on the line and balconies with flowerpots, and I heard the sounds of dogs barking and people chatting in the shade. Farther out, the bright blue Adriatic Sea stretched beyond the rows of red-tile roofs and baroque buildings. The glittering water looked particularly inviting on this steamy afternoon and provided a ready reminder that Dubrovnik has been a maritime town since its founding in the 7th century.

Given the hot weather, and mindful that, across the centuries, most visitors to Dubrovnik had come by boat - not by bus from Split, as I did - I decided to explore this beautiful, historical place from a new and possibly cooler vantage point.

So it is that, on the following evening, I find myself in a kayak in 95-degree heat at dusk when I hear Matej say something about Napoleon.

"Napoleon," Matej says again, pointing to the small island of Lokrum just ahead as I paddle closer. I see only a masted, pirate-like wooden ship playing party music and a few smaller sailing boats. Then he explains: "Napoleon is one of the reasons Lokrum is cursed."

Matej, a history student in Britain during the academic year who returns each summer, explains that monks lived on the island until the early 1800s. In 1806, Napoleon's army stopped in Dubrovnik in need of provisions and ended up staying for nearly a decade. Dubrovnik lost its freedom after more than 500 years as a neutral republic, and the monks lost their island home of some 800 years. In response, Matej says, the monks placed a curse on the island, forever condemning those who tried to claim it. To this day, there are no overnight accommodations.

By now, we have swung around the far end of Lokrum, and, ready for a break in the heat, we stop in a cove once allegedly used by smugglers. We hop out to cool off in the sea, and I suddenly notice two nude sunbathers on the rocks above us.

"Oh, they are probably from the nearby naturist beach," Matej says, himself wearing a Speedo with "DANCE" across the back. I eventually realize this is the name of a local beach and not an invitation to groove.

Not sure what's next, I pull my phone from its waterproof case and learn that English King Richard the Lionheart is said to have shipwrecked on Lokrum while returning from the Crusades in 1192. Six centuries later, the Hapsburg monarchs followed, having bought Lokrum after the French departed. The Hapsburgs used the island as a vacation getaway between family tragedies, such as one archduke's ill-fated reign as emperor of Mexico and Archduke Franz Ferdinand's plans to summer here in 1914, only to be assassinated in Sarajevo, sparking the First World War. Bad luck and curses seem to be a thing on Lokrum.

Now feeling refreshed, I am ready to leave these ghosts (and nudists) behind. Enthusiastic as always, Matej suggests a return trip.

"You should come back during the day. There is a botanical garden, an old fort and the beaches are great," he says as we climb back into the kayaks. "Just make sure you leave before dark, of course."

For us, darkness is still an hour or so away, though the sun has by now slid low in the sky. A languorous orange glow colors the Old City and hills as we paddle toward them and away from the island.

The limestone streets and the cliff-top city walls of Dubrovnik typically have a crush of tourists in summer. Since the city's time as a powerful republic and a trading crossroads, the channel has been busy with ships. The activity helped transform Dubrovnik into a wealthy, cosmopolitan place known for its progressive policies (banning slavery in 1416, for example), hospitality and diplomacy. More recently, Dubrovnik's steady flow of visitors has come from cruise ships and "Game of Thrones" fans visiting filming sites scattered around town.

But on this June evening, the pandemic and related travel restrictions have stilled the channel leading to the harbor. The channel is mostly empty as we enter. I am also the lone participant of a kayaking tour that, in summers past, had about 10 people taking part. Instead of cruise ships, there are only a handful of luxury yachts and a ferry heading away from Lokrum before dark, like us.

Facing the shore, Matej and I can see rocky, green hills overlooking the Old City, and closer to the water, grand villas and hotels popular with celebrities, emirs and oligarchs.

To our right, Matej points out an abandoned resort marked by graffiti and broken windows. Once home to the 200-room Hotel Belvedere, the resort now resembles the lair of a James Bond villain as it collapses into the sea. Built in the 1980s when Croatia was part of Yugoslavia, the resort closed when Yugoslavia fractured during the 1990s. The final blow came during the Croatian war of independence in 1991. (For more on the Balkan wars in the 1990s, visit the excellent War Photo Limited museum just off the Stradun, Dubrovnik's main street.)

"Tourists stayed away because of the fighting," Matej says. "Here, let me show you something else."

He turns his kayak around and points to the largest hill above us, one with a cable car leading to it and marked by a cross and a television tower.

"That's Mount Srd. During the war, the Yugoslav People's Army tried to take it. If it hadn't been for the guys defending the hill, Dubrovnik wouldn't be here, the city would have been destroyed. All those red roofs you see in town, those are new and on buildings and houses repaired after the war."

"Were you here, then?" I ask as we paddle slowly toward Dubrovnik's harbor.

"I wasn't born yet, but my mom and dad were here," Matej says. "My dad fought in the hills [for Croatia], and my mom, like everyone else, went without electricity and heat for seven months during the siege. She used to work as an administrator right there where the Lazareti used to be."

He points to a complex of low buildings just outside the main harbor. I had learned earlier while walking through town that Dubrovnik had built the Lazareti in the 1600s as a plague hospital and quarantine site for visitors from places with epidemics - all of us these days. In more recent times, the city converted the complex into an arts-and-entertainment zone.

The revitalized Lazareti and the restored jewel of the Old City, so far having survived a recent war, a devastating earthquake and fires and now facing rising seas, remind me that history is not always set in stone, even among the old walls of Dubrovnik.

By now, I have inadvertently paddled past the half-moon-shaped Fort St. John, which had once guarded the small harbor and is now home to an aquarium. Long ago, vigilant harbor masters dragged chains across the entrance to keep out invaders. I am not supposed to be here, either, as a lowly kayaker, but on this quiet evening, the port is clear of ship traffic. Matej joins me briefly as we rest before completing our roughly six-mile loop back to our starting point next to Fort Lovrijenac, just outside the main city gate.

My kayak catches the tide, and I slowly turn counterclockwise, back in the direction we need to go, moving away from the Lazareti on the shore, past the old port and toward Fort St. John at the harbor entrance. As I finish this paddle through the past, the current carries me forward.