Sampling beaches and tavernas on the Greek island of Paros 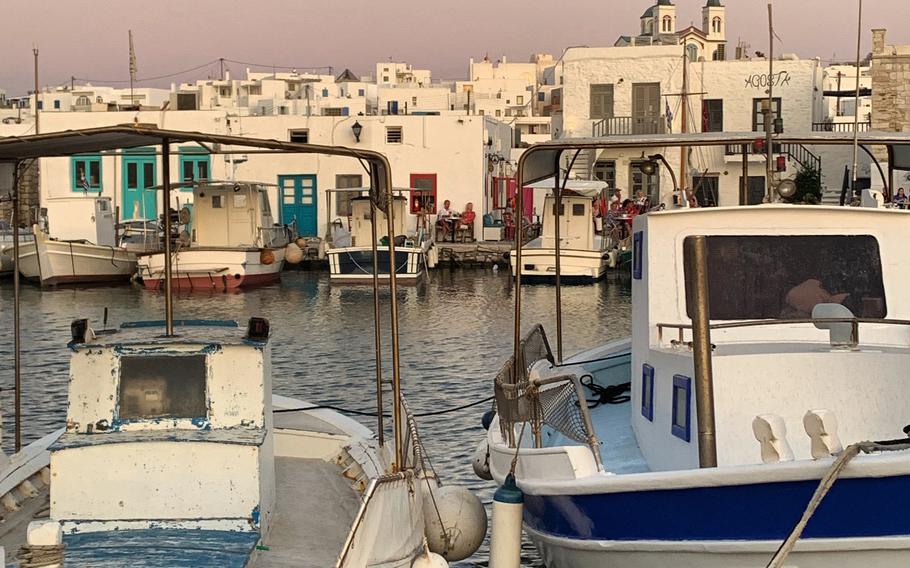 My scrambled eggs on toast arrived at the same time as my rental car.

I sneaked a crispy milk pie from the breakfast buffet on my way to meet the Rental Car Guy in the hotel lobby. I had been told having a car on Paros, a Cycladic Greek island that's a three-hour fast ferry from Piraeus port in Athens and about 64 square miles, was ideal for getting a feel for its spirit - not to mention seeing some of its dozens of beaches and sampling its many tasty tavernas. So, with the help of the concierge at Parilio Hotel in Naoussa where I was staying, I reserved one for two of my three days there. I had driven solo through other foreign countries before - Israel and France to name two. But, it turned out, there was one thing I had then that I did not have now: my license.

I ran back to my room and dug through my handbag and suitcase a second time.

Did I really leave it at home? I wondered. Could I have been that careless?

To be sure, I had identification with me. I had just forgotten the one that proves I know not to make a right on red.

Thankfully, there are no traffic lights on Paros. This is a vacationer's island, after all. In which case, vacationer rules apply. While I would not get a car from this Rental Car Guy, calls were made, a digital version of my license was procured, and before a new plate of scrambled eggs on toast could be prepared, I had a four-door Nissan waiting for me in the parking lot.

"Just be careful," said this Rental Car Guy with a forgiving smile. "You'll be fine."

I starred and circled spots on a map, denoting the destinations I wanted to visit, and placed it on the passenger seat. There is only one main "highway" that circles the island with a dozen or so off-roads and another that crosses the center, so although my car had Bluetooth and it felt reassuring to be connected, it was unnecessary. Plus, all beaches and towns were clearly marked.

I found my first stop without a hitch: Kalogeros Beach, known for its clay-based boulders used to make mud mixtures. I had no idea how to properly exfoliate my skin using nature, so I befriended another beachgoer who showed me how to shed dry rubble from the rocks, mix it with water to form a gluey gray paste, and then cover my arms, legs and face. Sure enough, after rinsing 30 minutes later, my skin was newborn baby smooth.

Next up, I drove a bit farther south toward Golden Beach; a stretch of sand with a variety of "clubs" including the Beach Project, which boasts cushioned loungers, umbrellas, and a menu serving grilled talagani cheese wraps and brain-freeze-inducing beverages. It was either pay for a seat or get it free with a snack, so I ordered a smoothie and applied some SPF.

After ambling to the other end of the beach and back, collecting shells along the way, I paid my bill - about $7 - and was off to the seaside town of Drios. A friend recommended the taverna Markakis, so I sat for a salad with oregano-topped feta and salty black olives while watching the sea crash onto the shore just feet away.

With prime sunning hours behind me, I drove inland to Lefkes, Paros's original capital. After parking, I found myself squeezing through narrow passageways via stone steps to reach what appeared to be the town center. But I didn't see much activity, aside from stray cats roaming the alleys and fuchsia bougainvillea bushes draping white stone houses with blue shutters.

After an hour of wandering, I decided to call it a day. Unfortunately, what Google Maps thought was the way to exit Lefkes and what was actually the way to exit Lefkes did not align. At one point, I ended up driving the wrong way on a one-way street at the top of a very steep, crumbling, cobblestone hill. Unable to make the narrow right turn I supposedly needed to make - for fear of crashing into a car coming from the other way - I backed up, which was a feat for a city girl more accustomed to swiping Metro cards than filling gas tanks. After another 20 minutes of white-knuckle navigating, I finally made it out, passing what appeared to be the actual town center on the way; I was thankful to be dining at the hotel's Mr. E restaurant that evening where I could walk, not drive, back to my room.

Another day, another beach - and another test of my driving skills. The day's plan was to venture to Antiparos, a smaller island accessed only by ferry from the southwestern town of Pounda. I would once again have to back up my car - only this time onto a moving ship. Miraculously, I managed it without crashing and seven minutes later was cruising along this quieter island with wilder terrain.

In search of a lounge chair, I rolled into Beach House, a hotel and restaurant that rents sun beds for about $12. I laid there for a while, sipping a cafe frappé by the rocky shore, before ordering a creamy plate of labneh and bread. 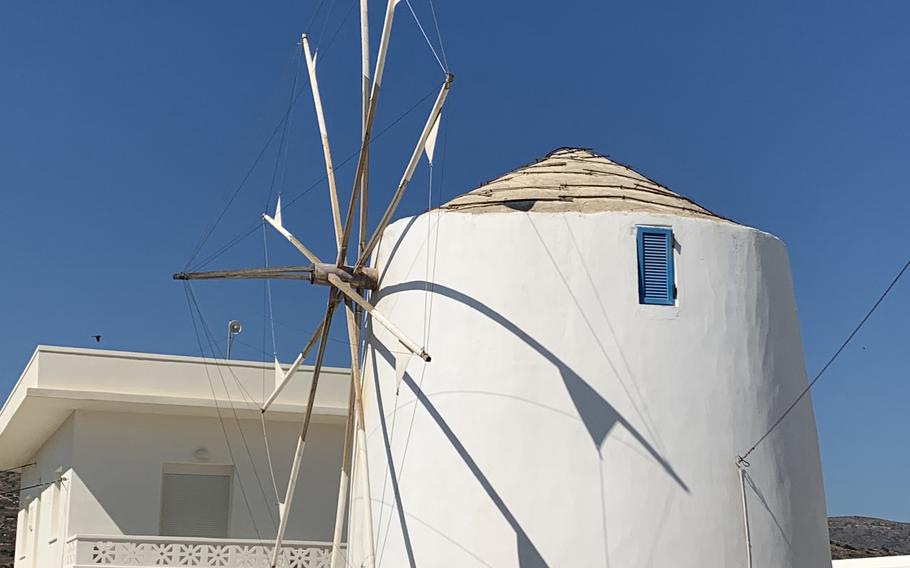 Windmills have become iconic in Paros and many other Greek Islands. This one acts as a round-about between villages. (Sara Lieberman/The Washington Post) 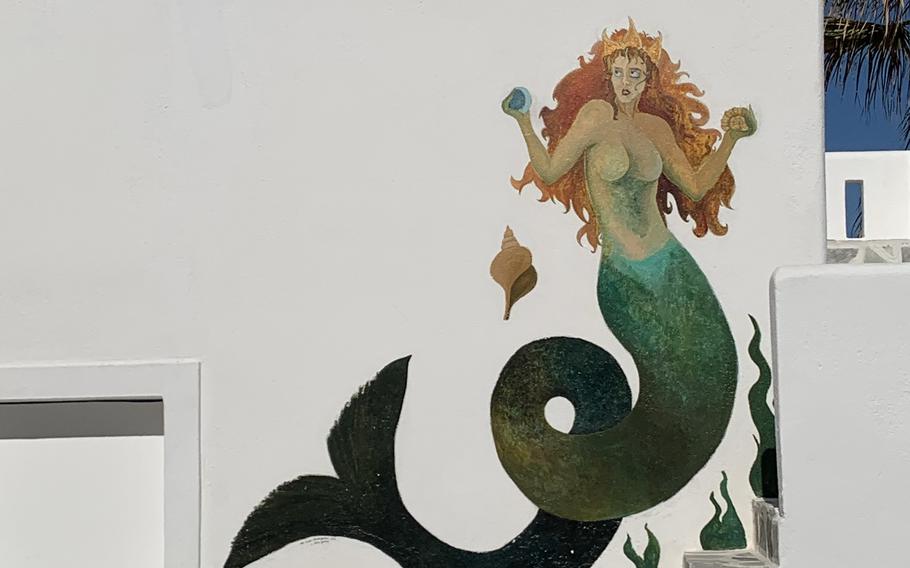 When a group tour disembarked a yacht at the property's private dock, I took it as my cue to move on. After driving up a seemingly endless, winding road to the island's highest point, I then descended 278 feet into a cave where I was surrounded by stalagmites and stalactites dating back millions of years. The cool temps underground were a welcome relief from the heat outside, though the hike back up 411 steps - and the two-lane cliff drive back to the ferry dock - brought the sweats back real fast.

Finally, it was that time of day where the sun no longer feels too intense on salty skin to sit directly in it, but you want shade and a cool breeze anyway. I chose a wooden table under some pine trees, steps from the sea, at Thalassamou restaurant in the town of Aliki back on the main island. A furry feline hopped up onto my lap as I tucked into a "kataifi nest," tomatoes, fried basil leaves and local goat cheese wrapped in a hay-like pastry, and enjoyed a rare moment of shared bliss.

I walked it off along the shore, the aqua Aegean tickling my bare feet. As I made my way to Aliki's port, I saw giant fresh octopuses hung out to dry by their tentacles.

Despite all I had already snacked on throughout the day, there was still one restaurant I wanted to try, so I popped back to the hotel for a quick refresh before heading into town. Naoussa comes alive at night, whether over by the port where the fishing boats seem to bob along to the music coming from the restaurants, or inside the mazelike streets where boutiques boast unique pottery and covetable straw handbags.

Getting lost felt par for the course on my way to find Statheros, a tucked-away, farm-to-seaside-table restaurant. Once I arrived, only the moonlight and a small candle lit my menu, which listed so many things I wanted to try but knew I couldn't finish on my own. I enlisted the help of co-owner Giannis, who suggested I order half-portions of a few items.

"I can do that?" I asked, feeling silly for not having thought of this sooner.

Whether at the wheel without a license or at the table without a dining partner, as long as I've got the desire to seek and savor, I often am. 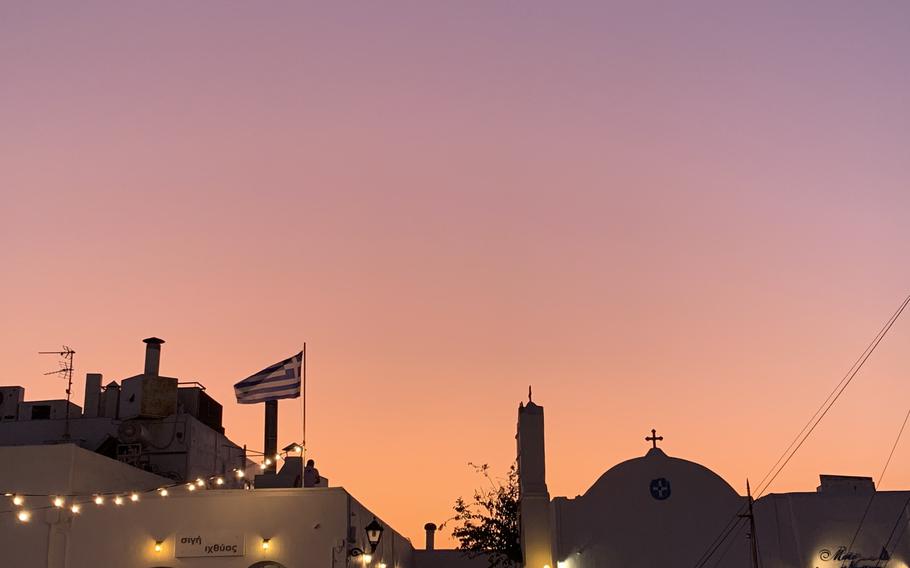 The sun sets in Naousa, one of Paros's more lively towns for dining, drinking and shopping. (Sara Lieberman/The Washington Post)

A member of Design Hotels, this 33-suite boutique hotel just outside Naoussa glows with natural light - no matter the time of day. The arched doorways, concrete columns and whitewashed rooms represent traditional Cycladic architecture and feature a neutral color palette with an occasional burst of blue and yellow. The pool is designed to mimic nearby Monastiri beach known for its giant boulders. The breakfast buffet, which is spread out on five tables, is truly spectacular. From about $772 per night.

At family-run Statheros in Naoussa, second-generation chef Konstatina Manolaki shows she has inherited cooking talent from her mother, celebrity chef Argiro Barbarigou, serving stewed chickpeas and a cheese pie with thyme honey so good it's sinful. Go for sunset and sit at a table on the pebbles. Main courses from about $17.

There is no shortage of desirable places to sit at this beachside restaurant on the southern end of the island, just a quick beach walk from the fishing village of Aliki. But under the pine trees, close to the sea, is the most idyllic. Main courses from about $20.

This casual mom-and-pop taverna in the small town of Drios on the island's south eastern end is ideal for a crispy Greek salad with oregano-topped feta. You may even get a complimentary ice cream bar for dessert. Entrees from about $9.50.

A destination in its own right, even if you're not staying at Parilio Hotel, this gastronomic restaurant boasts an airy setting for serving modern Mediterranean dishes such as pappardelle zucchini with mint pesto, grilled halloumi cheese and grapes. Signature cocktails like the "Woo Woo" with vodka, passion fruit and watermelon are refreshing and buzz-inducing. Entrees from about $17.

Located on the east side of the island, this quiet swath of sand is known for its clay-based boulders used to make mud mixtures to rub on the skin as a smoothing mask. Bring your own towel or sarong if you want to stay for a DIY spa treatment and sunbathing. But watch your stuff: The tides come in fast. Free entry.

Paros's original capital is smack dab in the middle of the island, on a huge hill, and reached by winding roads. Park at the top, then follow stray cats through narrow alleys blooming with fuchsia bougainvillea and get lost on the stone streets dotted with doorways of a bygone era.

This popular town is dotted with quirky boutiques boasting locally crafted jewelry, sandals and pareos, not to mention some of the island's best restaurants and bars. Ditch the car on the outskirts and walk within its mazelike stone streets and buzzing summer scene.

A bit further south, this longer beach with mellow waves, features a variety of clubs such as the Beach Project where you can rent lounge chairs and umbrellas and order snacks and beverages for a full (or half) day of worshiping Greek sun god Helios. Free entry.

This smaller, sister island is accessible only by ferry from the southwestern town of Pounda. The terrain is a bit more wild and the beaches even more secluded. (Case in point: Tom Hanks and Rita Wilson reportedly have a house here.) Follow signs for any of the beaches or pop into Beach House to rent a lounge chair or grab a cafe frappé. Ferry runs daily Monday to Sunday; see schedule for more information. Ferry tickets $1.40 per passenger and $7.50 (for cars less than 14 feet in length), per car each way.

Up at the island's highest point, this ancient cave goes down 278 feet. Surround yourself by stalagmites and stalactites and get a refreshing dose of natural air conditioning before hiking back up the 411 (somewhat slippery) steps. Open daily 10 a.m. to 4 p.m. Entry about $7.15.