Italy to ban mammoth cruise ships from Venice as of Aug. 1 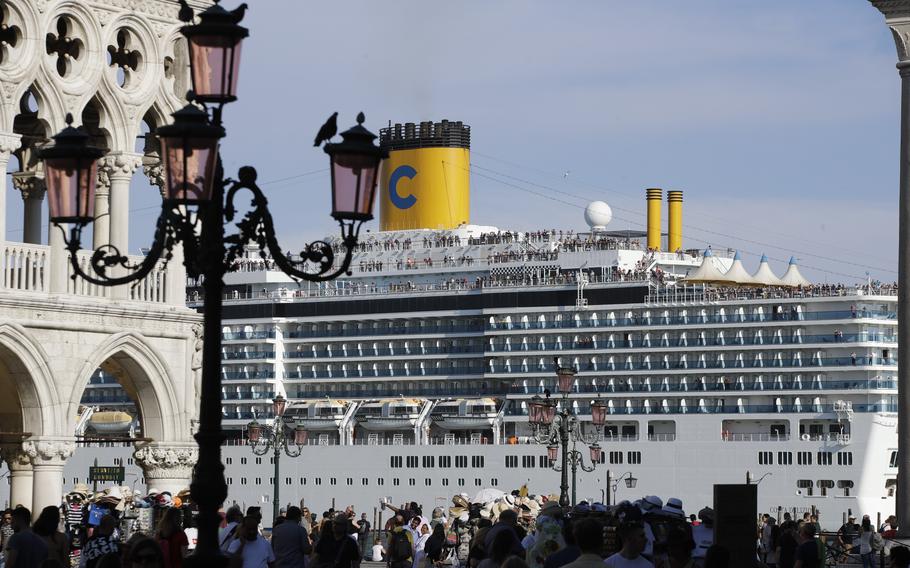 A cruise ship passes by St. Mark's Square filled with tourists June 2, 2019 in Venice, Italy. Declaring Venice's waterways a “national monument,” Italy is banning mammoth cruise liners from sailing into the lagoon city, which risked within days being declared an imperiled world heritage site by the United Nations. Culture Minister Dario Franceschini said the ban will take effect on Aug. 1 and was urgently adopted at a Cabinet meeting on Tuesday. (Luca Bruno/AP)

Declaring Venice's waterways a “national monument,” Italy is banning mammoth cruise liners from sailing into the lagoon city, which risked being declared an imperiled world heritage site by the United Nations later this month.

Culture Minister Dario Franceschini said the ban was urgently adopted at a Cabinet meeting Tuesday and will take effect Aug. 1. It applies to the lagoon basin near St. Mark’s Square and the Giudecca Canal, which is a major marine artery in Venice.

Franceschini said the government decided to act fast “to avoid the concrete risk” that the U.N. culture agency UNESCO would add Venice to its list of “world heritage in danger” after it begins meeting later this week in Beijing.

The Cabinet decree also "establishes an unbreakable principle, by declaring the urban waterways of St. Mark's Basin, St. Mark's Canal and the Giudecca Canal a national monument,'' the minister added.

Before the coronavirus pandemic severely curtailed international travel, cruise ships discharging thousands of day-trippers overwhelmed Venice and its delicate marine environment. Environmentalists and cultural heritage have battled for decades with business interests, since the cruise industry is a major source of revenue for the city.

The government's decision was “awaited by UNESCO and by all those who have been to Venice and who have remained disturbed by the huge size of these ships passing through the most fragile and most beautiful place in the world,” Franceschini told reporters.

There was no immediate comment from the U.N. cultural agency.

The Italian government earlier this year had decided on a ban but without quickly setting a date for it to start.

But now, the government “decided to impose a strong acceleration" to implementing the move given the looming UNESCO review, Franceschini said in a statement.

Another impetus was the startling appearance in early June of a 92,000-ton cruise ship nosing its way down the Giudecca Canal for the first time since the pandemic's arrival in early 2020 effectively suspended mass tourism in Venice.

The ban applies to ships weighing more than 25,000 tons or longer than 180 meters (530 feet) or with other characteristics that would make them too polluting or overwhelming for Venice's environment.

Italian Premier Mario Draghi's office specified that ships that don't have any of those characteristics and thus “are considered sustainable" to the Venetian environment can continue to dock in Venice. The premier's office noted that permitted ships generally have about 200 passengers compared to the thousands that huge cruise vessels carry.

With only a few hours of shore time in Venice, the big liners' passengers tend to clump around classic tourist sites like St. Mark's Square, adding to the city's already crowded public spaces.

No cars are allowed in historic Venice, which consists of narrow alleys and many bridges linking passageways. During high tourist season, which occupies a good deal of the year in Venice, navigating as a pedestrian is a daunting challenge.

The Cabinet decree also establishes compensation mechanisms for navigation companies and others affected by the ban. Until a more suitable docking area can be established elsewhere in waters outside the heart of Venice, the government has approved creating at least four temporary docking sites near the industrial port of Marghera, located on the northwestern Adriatic Sea.