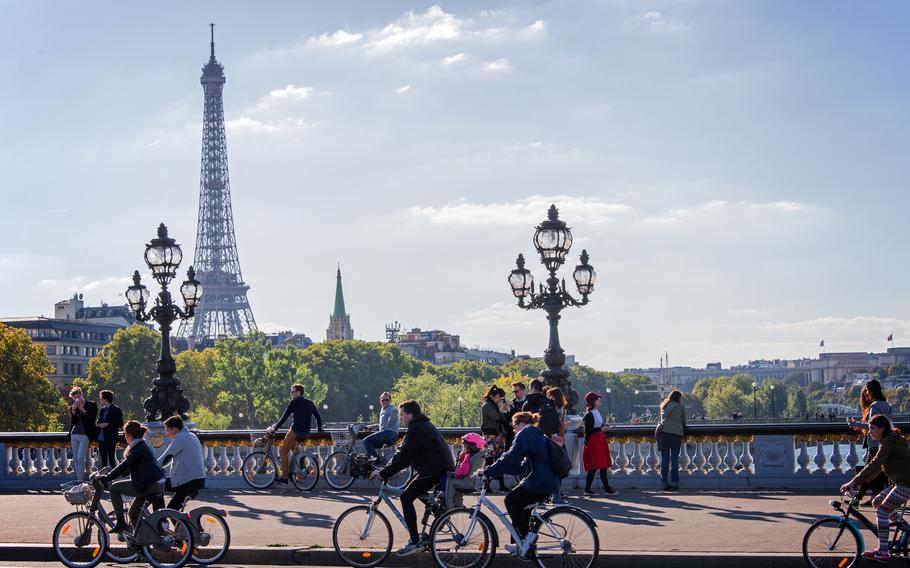 Biking is the new walking in Paris, as private car traffic has been banned on some major roads. (iStock)

When Parisians woke up on May 19, they found a city reborn. Overnight, the curfew had been pushed back to 9 p.m. from 7 p.m. The streets surrounding Opera Garnier went from pin-drop silent to bustling, with locals eager for the first "cafés en terrasse'' since October. Not too far away, in the lively Pigalle district, the excitement was such that bistro owners served their first pints before 10 a.m.

It was the first sign that Paris was gradually waking up from months of stringent restrictions.

That process has been slow, and it's still ongoing. Some landmarks, such as the Eiffel Tower, remain shut — its reopening is slated for July 16. But the seven-day average of new daily cases has declined by 83% since the end of March, and as of June 8, 55% of France's adult population has received a first vaccine dose. That's allowed most shops, museums, theaters, and terraces to return to a mostly normal rhythm, albeit with 50% occupancy restrictions through the end of June.

International tourists have been notably absent thus far, but those, too, are coming soon.

As of June 9, visitors from a "green" region, including the EU, Israel, Japan, Singapore and Australia, can come to France without a COVID-19 test so long as they're fully vaccinated. Tourists from "orange" countries such as the U.S., Canada, and the U.K. will still need to show a negative PCR or antigen test, even if they've been inoculated. If you're coming from a red-zone country, like Brazil, India, or South Africa, a minimum seven-day quarantine remains in place.

Travelers seem eager to work within the confines. "We're seeing initial signs that American customers are coming back this month and next,'' says Isabelle Bouvier, hotel director of the Left Bank's most luxurious hotel, Le Lutetia. But she says it's too early to know whether the tourism season will be saved. These days, Palace hotels such as hers have just 8% to 15% of their rooms full-compared to 70% in a normal summer-according to UMIH Prestige hotel industry group.

If Paris received around 10 million tourists during summer 2019, the Tourism Office expects half as many visitors this year. But that's just one reason that Paris may look and feel a little different than you remembered.

The dining scene: The pandemic shook Paris’ dining scene to its core. For more than half a year, restaurants were fully unable to serve guests on their premises. With state aid continuing, it’s hard to gauge how many venues have shut down permanently. Many dining rooms went dark temporarily; fearing they might dilute their brand with delivery services, they opted not to do business at all until brighter days arrive.

That time is now. With balmy temperatures, luxuriously late sunsets, and a curfew that's been newly reset at 11 p.m., Parisians have taken back their dining habits with gusto. In some streets with narrow sidewalks, it's hard to move around without bumping into a chair or a wooden deck.

For those seeking ample outdoor space as well as refined cuisine, Loulou makes a great bet. It's located next to the Louvre and the Musée des Arts Décoratifs and serves Italian and Mediterranean cuisine from a green outdoor space on the Tuileries gardens. "We're lucky we're in a garden that's very much protected from the city's tumult — a little haven of peace in a metropolis,'' says Loulou co-founder Gilles Malafosse.

Culture makes a comeback: Plenty of new cultural and shopping destinations have opened just in time for tourism's big restart. Here are a few ideas for how to spend your days, depending on whether you're still COVID-cautious or ready to party like it's 2019.

If you're COVID-wary: Paris and its surroundings offer multiple green escapades, whether it's the Jardin des Plantes and its zoo, Claude Monet's Giverny residence, or the gardens of the Château de Versailles. If riding the commuter rail defeats the purpose, there's always something happening in the Luxembourg Gardens, which now, more than ever, serve as a nucleus of Parisian life. 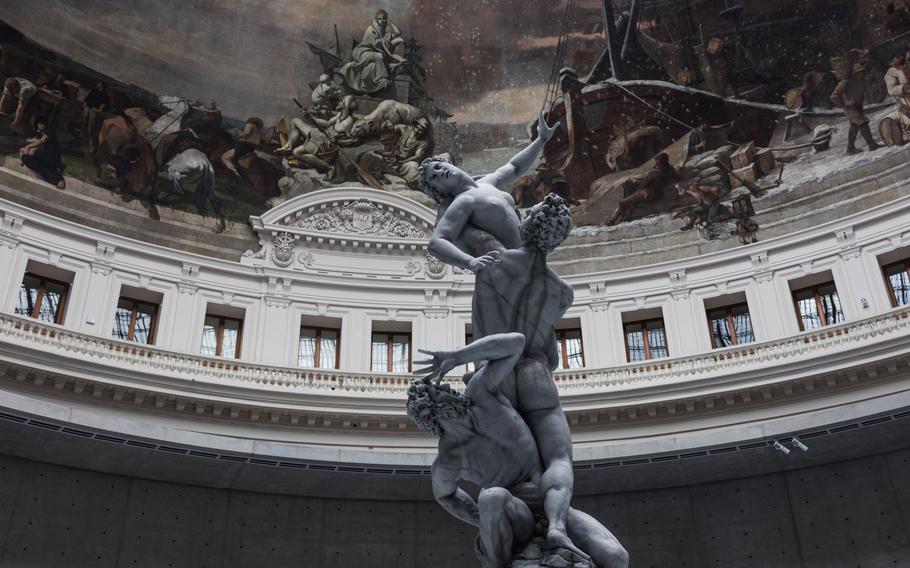 A replica of the 16th-century sculptor Giambologna's 'Rape of the Sabine Women', one of nine wax figures that comprise Urs Fischer's 2011-2020 work "Untitled" at the "Ouverture" exhibition in the Boerse De Commerce in Paris on May 14, 2021. (Jeanne Frank/Bloomberg)

If you need a gentle reentry: Francois Pinault's long-awaited temple to contemporary art, the Bourse de Commerce, opened on May 22 just a few blocks north of the Louvre. Its current exhibition showcases works by Cindy Sherman, David Hammons, and Urs Fischer-whose nine monumental wax sculptures are like supersized candles that are slowly melting under an enormous glass dome.

Pair it with a visit to the Musée Carnavalet in the Marais, which traces the city's history from prehistoric to current times. It's Paris's oldest museum but also it's newest, having reopened a week after the Bourse following a four-year renovation. Among the highlights: a room of objects belonging to the literary giant Marcel Proust.

If you want to pretend the pandemic never happened: Although all restrictions will lift on June 30, the government has yet to greenlight nightclubs. And while fashion shows are returning to a physical format — menswear fashion week will start on June 22, followed by Haute Couture week on July 5; the after-parties are still very much TBD.

Instead, the summer-long carnival known as Wonderland is coming to eastern Paris, allowing up to 1,000 people to simultaneously enjoy dance and yoga lessons, a skate ramp, a basketball court, and a petanque strip, as well as stand-up comedy shows and outdoor concerts.

How to get around: Biking is the new walking in Paris, thanks to a decision by the Mairie de Paris (city hall) to ban private car traffic on some major roads.

The Right Bank's Rue de Rivoli, which connects the Place de la Concorde to the Bastille, is now essentially a cycling lane (nicknamed the "corona lane"). Tourists are able to rent bikes with the Velib app and get on one of the ubiquitous gray-and-green bicycles docked all across town.

"Paris will look at lot more different if you haven't come since March 2020, thanks to the bike lanes and the terraces,'' says Frederic Hocquard, who oversees tourism at the Mairie. "We've reorganized public space to make it more friendly and welcoming.''

The lingering COVID etiquette: When shopping, it's still very common to see customers queuing up outside stores and waiting for a nod from a sales assistant to get in.

Masks are still mandatory, indoors and outdoors, except when eating, drinking, working out, or smoking. That said, Parisians are increasingly relaxed about lowering their face coverings when walking around town, especially as temperatures rise. Those who don't respect the 11 p.m. curfew risk a 135 euro fine.

And while the French were reknowned for their two kisses on the cheeks-aka "la bise"-that habit has all but disappeared. For now, at least, they're opting for elbow or fist bumps.