Tour the highlights of the 2021 Venice architecture biennale 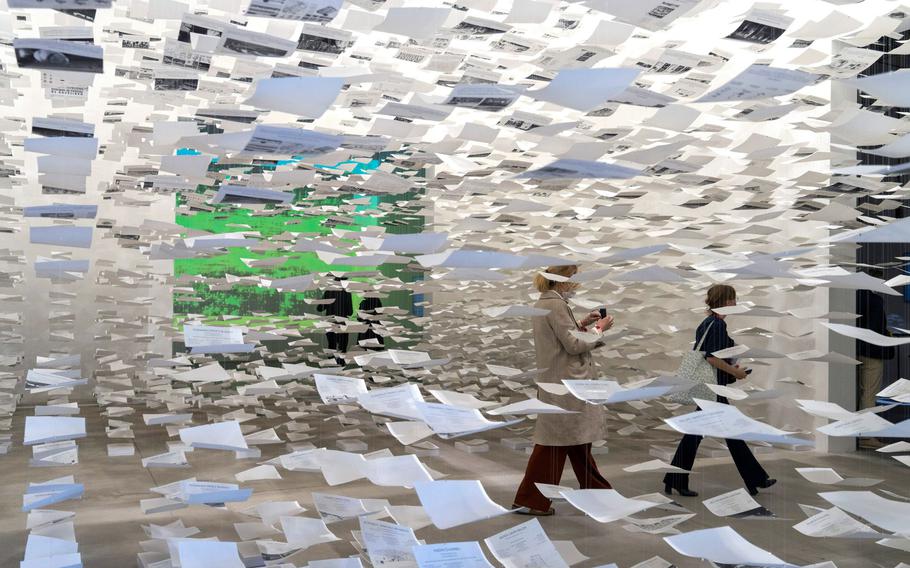 Inside the Spanish pavilion. (Giulia Marchi/Bloomberg)

For the past 40 years, the Venice Biennale of Architecture has produced a mixture of futuristic design, compelling propositions for environmental and technological innovations, and a healthy dose of inscrutable theoretical technobabble.

This year's Biennale, which was supposed to take place last year but was delayed by of the COVID-19 pandemic, is titled, presciently, "How Will We Live Together?" It includes submissions from 61 countries that are primarily shown in national pavilions in the city's Giardini, a park on the southern side of Venice's Castello district.

The titular exhibition, organized by this year's curator, Hashim Sarkis, dean of the School of Architecture and Planning at the Massachusetts Institute of Technology, fills the Giardini's Central Pavilion and nearby Arsenale, a massive labyrinth of one-time factory buildings.

Some of the most dramatic presentations are by countries that commission and design pavilions as a form of national boosterism.

The U.S. submission, co-curated by Paul Preissner and Paul Andersen, both professors at the University of Illinois at Chicago, is titled "American Framing," and explores the use of wood framing in American architecture. "By committing the entire exhibition to wood framing - the great forgotten basis of American architecture-our presentation at this year's Biennale elevates an often dismissed or ignored form of construction," said Preissner in a statement.

The exhibition takes place inside the U.S. pavilion; outside, the curators have constructed a full-scale, four-story facade using wood framing that visitors can climb and explore.

Many of the presentations have a decidedly political bent. The British pavilion's "Garden of Privatised Delights," curated by Manijeh Verghese and Madeleine Kessler, highlights the growing barriers between the U.K.'s public and public spaces.

Visitors walk through a series of fanciful installations that bely the earnestness of the intellectual exercise: The exhibition, the organizers write, "calls for new models of privately owned public space in cities across the U.K. It challenges the polarisation of private and public, which often leads to divisions within society."

In an installation in the Central Pavilion, designed by the artist Tomás Saraceno in collaboration with meteorology researchers at MIT, visitors can go inside an inflatable floating sculpture that rises into the air without the use of fossil fuels. Titled "Museo Aero Solar Reconquista" and created in Buenos Aires, the work is one of dozens around the world made by communities that "rescue" used plastic bags to create their own balloons.

Sometimes the content takes a back seat to the installation itself.

In the show at the Spanish pavilion entitled "Uncertainty," the project's four curators have created a "cloud" comprising pieces of paper generated from various architecture projects.

The organizers were chosen from an open-call competition, as opposed to most pavilions' direct commissions. The goal of the installation, they write, is to act as "a repository of strategies for our living together-an inexhaustible source of Uncertainties that works as a database for the rest of the pavilion."

Blurring the lines between sculpture and architecture, the Chilean group Elemental has constructed a version of the structures historically used for parleys (peaceful negotiation between enemies).

The structure was inspired by the ongoing violence between the indigenous Mapuche and the Chilean government, which have long had disputes over land and resources.

Many of the pavilions take the question posed by the Biennale's organizers literally. Curated by the National Museum of Norway and designed by the architecture firm Helen & Hard, the Nordic Pavilion's installation is a prototype of a co-housing development wherein a number of services are shared.

The pavilion is divided into sections, with some shared work and eating spaces and private and semi-private rooms for sleeping, relaxing, and playing.

The Belgian pavilion, which is curated by the architect Dirk Somers of Bovenbouw Architectuur, is filled with a fictional, albeit "recognizable" city that asks: "How can the city and architecture flourish together?"

It's an increasingly urgent question: Preservationists, urban planners, developers, and city governments are struggling to create enough housing, green space, and transportation for the world's urban centers. Somers suggests a combination of adaptive reuse and new construction, all of which, organizers say, "contribute to a cobbled-together yet balanced city."

Architects Pierre Alain Trévelo and Antoine Viger-Kohler, who founded the Parisian firm TVK, have created a fictional planet that explores and documents the effects of infrastructure on a geography. "The transformations they generate on the ground," organizers wrote, "are registered in the geological layers represented in their three dimensions."