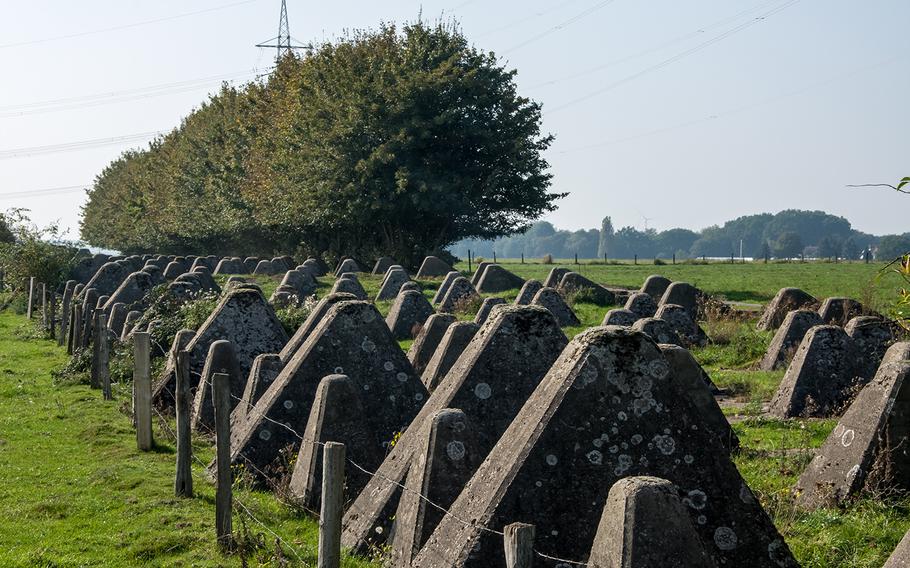 The Siegfried Line was a World War II German defensive system stretching some 390 miles along the western border of the old German Empire. Referred to as the Westwall by the Germans, it ran from Kleve, on the border with the Netherlands, to the town of Weil am Rhein, near the Swiss border in the south.

Built between 1938 and 1940 upon Adolf Hitler’s plans and roughly opposite to the French Maginot Line, the defensive line built in part by vast numbers of forced laborers was made up of some 18,000 bunkers, tunnels, trenches, tank traps and other fortifications. Although it had a role to play in Nazi propaganda, the first real action along its length came about as a consequence of Allied advancement following the D-Day landings. On Aug. 24, 1944, Hitler gave a directive for renewed construction on the Siegfried Line, and from September 1944 to March 1945, the Siegfried Line was subject to a large-scale Allied offensive.

Although much of the wall has been purposefully obliterated, pieces of it still stand, from concrete pillbox bunkers to the anti-tank obstacles known as dragon’s teeth. Since 1997, under the banner of “Der Denkmalswert des Unerfreulichen” (The Value of the Unpleasant as a Memorial), efforts have been made to preserve the remains of the Siegfried Line as a historical monument. Here are some places where the stories of those who built, fought and died along its way can still be heard. (Note that museums remain closed for the time being; times given reflect non-pandemic operating hours.)

North Rhine-WestphaliaThe first clashes along the Siegfried Line began in August of 1944, with fighting concentrated in the Eifel region’s Hürtgenwald (Hürtgen Forest) some 12 miles southeast of Aachen. With the Aachen Gap a logical route into Germany's Rhineland and a major industrial area, it stood to reason for the Germans to mass their defenses here. By some estimates, around 24,000 of the approximately 120,000 American troops and reinforcements to fight in the Battle of Hürtgen Forest lost their lives in battle, with thousands more succumbing to injuries later on. The German death toll is thought to number around 12,000.

The “Hürtgenwald 1944 and in Peace” is a volunteer-run museum that documents the death and destruction associated with the fierce battle through exhibits of items from both German and American troops recovered from the forest, backed up by photos, films and newspaper clippings and further bolstered by first-hand witness accounts. The museum located in Hürtgenwald-Vossenack is open from 10 a.m.-5 p.m. on Sundays between March and November; entry costs 5 euros. museum-huertgenwald.de

Other things to see nearby include the Vossenack church, the site of fierce fighting, and a cemetery for the German soldiers fallen in war. Visits to the Field Hospital Bunker Simonskall can be arranged by the above-mentioned museum. The Kall Bridge Trail in Schmidt has a poignant history. Burgberg, Castle Hill in English, in Bergstein, also known as Hill 400, is topped by an observation tower offering sweeping views of the forest; a pair of bunkers are also nearby. Online: tinyurl.com/w5aappzj

SaarlandJust to the northwest of the famous bend in the Saar River known as the Saarschliefe, a circular walking trail winds through a well-preserved section of the wall made up of numerous dragon’s teeth. The freely accessible site is located along the L177 highway between Orscholz and Oberleuken. Online: tinyurl.com/45t9ezj2

Rhineland-PalatinateThe Westwall Museum Irrel, near the Luxembourg border, is housed in a Siegfriend Line bunker built to secure the main connecting road between Cologne and Luxembourg. It stood out for its thick walls of reinforced concrete, up to two meters thick on the exterior, which were classed as “B” walls. The museum illustrates how a crew of 84 would have manned this fortress and includes a first aid station, ammunition storage room, canteen, kitchen, radio station, ventilation system and much more across three levels underground. Admission to this volunteer-run museum, open on Sundays only, costs 3 euros for adults and one euro for children. Online: westwallmuseum-irrel.de/en

The Siegfried Line Museum at Pirmasens, located on the outskirts of the village of Niedersimten, lies underground in what used to be the fortifications of the enormous bunker-like Gerstfeldhöhe. Vaulted galleries blasted out of solid rock stretch over half a mile. The system was used by the U.S. Army as a vehicle warehouse until the early 1990s. A 1.5 hour guided tour passes by weaponry, military equipment, reconstructed soldiers’ quarters and scrawled messages left by American soldiers. The museum is open 1 p.m.-5 p.m. Saturdays and Sundays from April to October. Entry costs 8 euros adults, 6 euros for children and is free for ages five and under. Online: westwall-museum.de

The Westwallmuseum Bad Bergzabern, housed in two old artillery bunkers, holds relics and documents from photographs to maps and military equipment. Much of what is displayed here represents the bunkers’ original contents. The museum is open 10 a.m.-4 p.m. on Sundays only; entry costs 4 euros adults, 3 euros for ages 8-13 and is free for ages seven and under. Online: otterbachabschnitt.de

The area surrounding Bad Bergzabern bears other traces of the section of the Siegfried Line referred to as the Otterbachabschnitt. Along the so-called Westerwallweg, an eight-mile trail leading through the small communities of Oberotterbach, Niederotterbach and Steinfeld, one can find other remains of the line, including the remains of bunkers, dragon’s teeth and wet and dry tank traps. The 36 information boards along the route provide context to the sights. Download the pdf flyer at Online: tinyurl.com/4p7fjzvs

Baden-WürttembergA working group of the historical society in Bietigheim-Bissingen maintains a restored Ro 1-type bunker at the Neckar-Enz position featuring a reconstruction of four of its original rooms, including a gas-lock chamber. The museum is open 11 a.m.-5 p.m. on the first Sunday of the month in April, July and September. Online: tinyurl.com/5bcyyymw