Hop to this Scotch bar in Wiesbaden 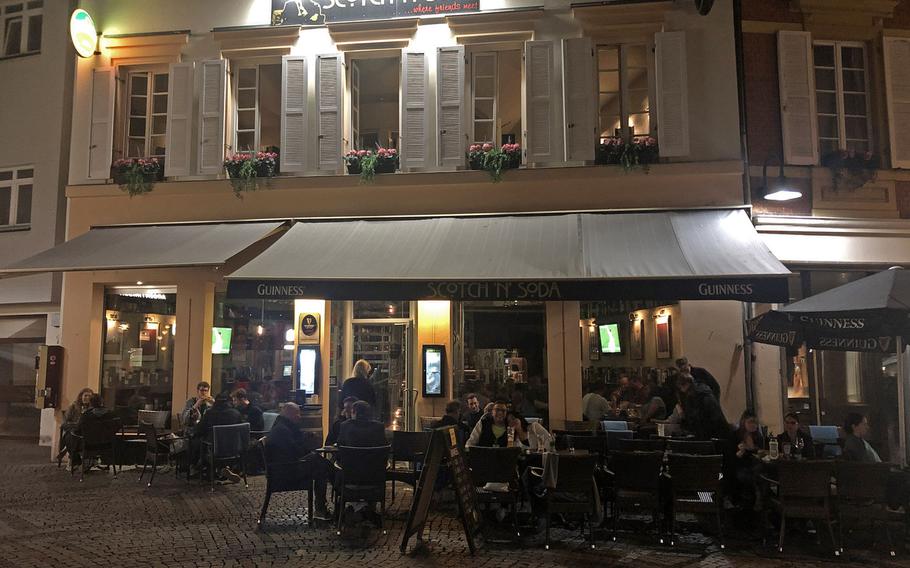 Scotch N Soda, a gastropub in the heart of Wiesbaden, Germany, on a Monday night in September. (Michael Abrams/Stars and Stripes) 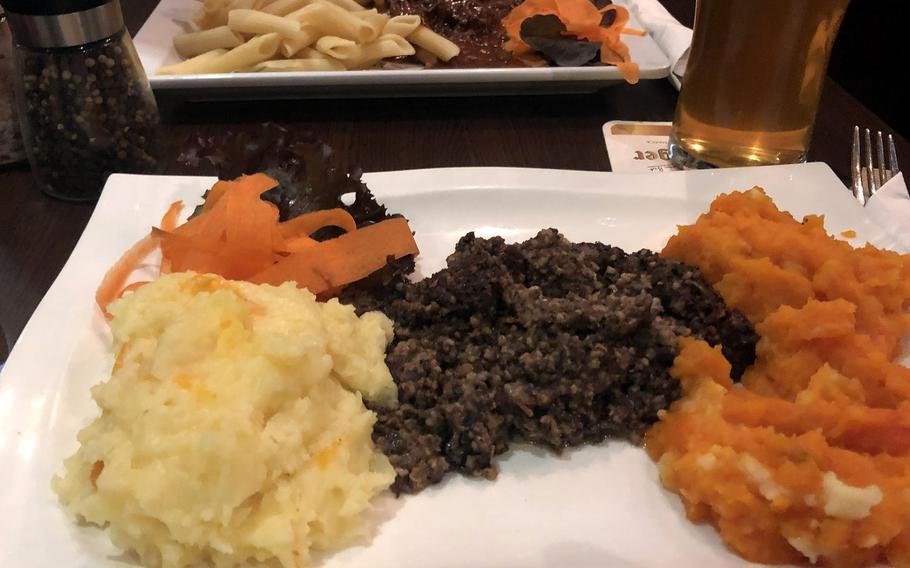 Haggis with neeps and tatties (yellow turnips and potatoes), foreground and beef goulash with noodles, as served at Scotch N Soda gastropub in Wiesbaden, Germany. (Michael Abrams/Stars and Stripes) 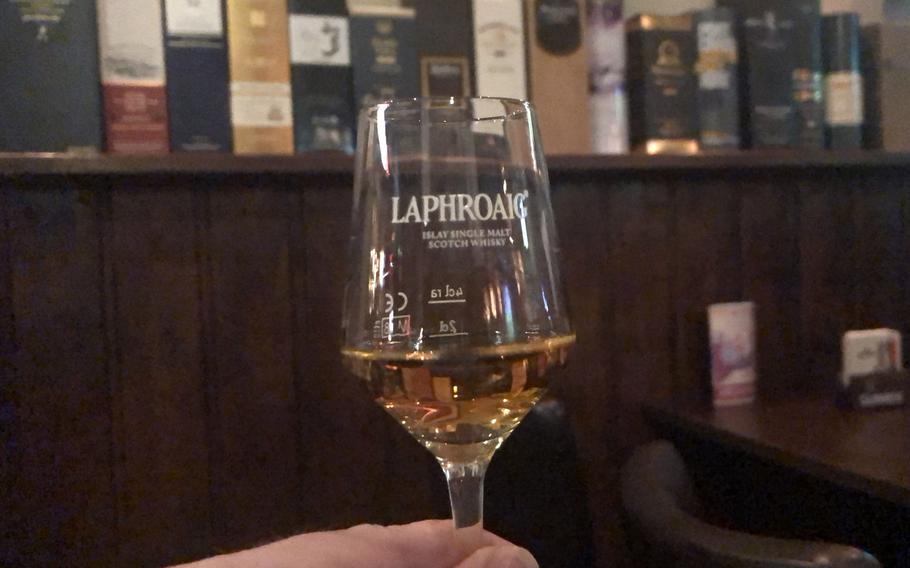 A dram of Laphroaig Triple Wood Scotch whisky at Scotch N Soda in Wiesbaden, Germany. Note the boxes of whiskies and whiskeys lining the wall. The gastropub offers more than 200 different varieties of the drink. (Michael Abrams/Stars and Stripes) 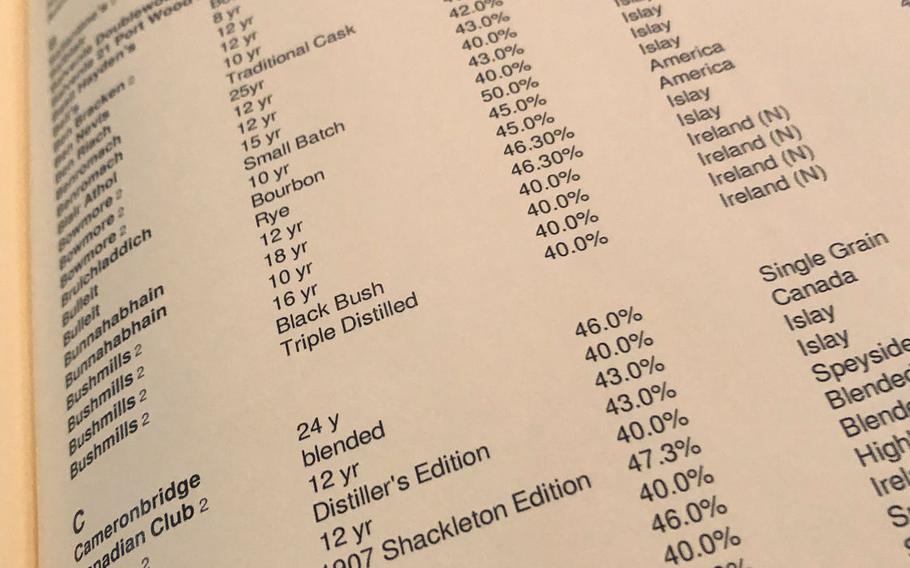 A page featuring some of the more than 200 whiskies and whiskeys available at Scotch N Soda in Wiesbaden, Germany. (Michael Abrams/Stars and Stripes) 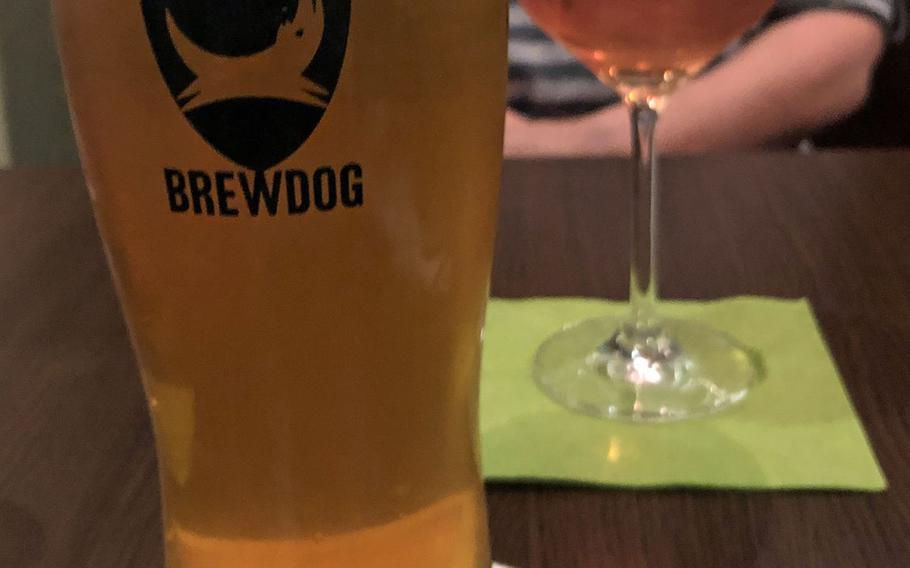 A Brewdog Punk IPA went well with the haggis and the ros? complimented the beef goulash at Scotch N Soda, a gastropub in Wiesbaden, Germany. (Michael Abrams/Stars and Stripes)

I am not a fan of scotch and soda. Scotch, yes; with soda, no. More of a neat type of guy.

But when I heard about a gastropub called Scotch N Soda, I decided to give it a try.

First, the establishment claims to offer more than 200 different whiskies and whiskeys, and it seems to have quite an eclectic food menu as well.

A thing about the spelling: it is always Scotch whisky. The same goes for Canadian and Japanese. In the U.S., Ireland and most of the rest of the world, it’s whiskey.

Nestled in a pedestrian zone in downtown Wiesbaden, Scotch N Soda looks like your normal pub, with dark wood furniture and TVs showing soccer on the walls. Lining the walls are a selection of the boxes the whisk(e)y bottles come in.

There does appear to be more than 200 varieties to choose from. There’s also an extensive drink and cocktail menu. We had a rose wine and a Brewdog Punk IPA with dinner.

The food menu offered everything from soup to beef filet, with hamburgers, schnitzels, salads and flammkuchen in between, with many varieties of each. It also had a page with “House Favorites,” with haggis, Irish stew, chili con carne, goulash and more. What it doesn’t have is a lot of vegetarian choices, except soups and some of the starters.

My dining companion settled on beef goulash with noodles and I chose the Scottish national dish, haggis with neeps and tatties.

Haggis, for the uninitiated, is a vegetarian’s nightmare, commonly comprised of the liver, heart and lungs of a sheep, ground and mixed with beef or mutton suet and oatmeal, seasoned, then packed into a sheep’s stomach and boiled. Neeps are yellow turnips and tatties, potatoes.

The goulash was good, too. Nice tender chucks of beef in a deep red paprika sauce, spicy without being hot.

As good as it all was, it was time for the highlight of the evening (except for the company, of course), a nice dram of whisky.

Seeing as we were at Scotch N Soda, it had to be from Scotland. Looking through the menu earlier, I had decided on one from the island of Islay. Now, I only had to select from about 20 choices.

I decided on a Laphroaig Triple Wood. Delicious, with the typical peaty taste and aroma of an Islay scotch.

We’ll definitely have a return engagement at Scotch N Soda. We enjoyed the food and drinks, and there are still about 200 more reasons to go back.

Location: In downtown Wiesbaden at Goldgasse 9.