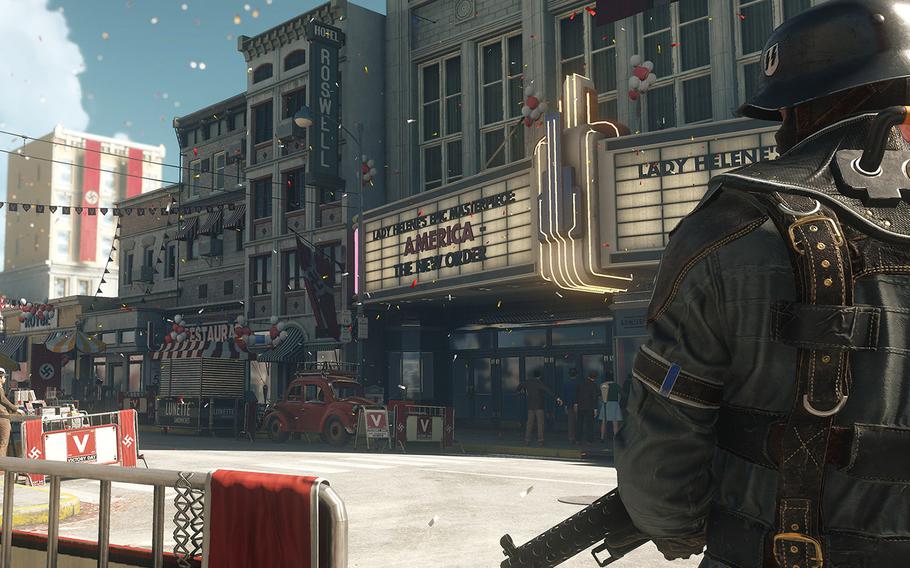 In "Wolfenstein II: The New Colossus" Once again players will step into the shoes of Nazi-killing terror William “B.J.” Blaskowicz as he attempts to single-handedly eradicate the Third Reich. (MachineGames)

In "Wolfenstein II: The New Colossus" Once again players will step into the shoes of Nazi-killing terror William “B.J.” Blaskowicz as he attempts to single-handedly eradicate the Third Reich. (MachineGames) 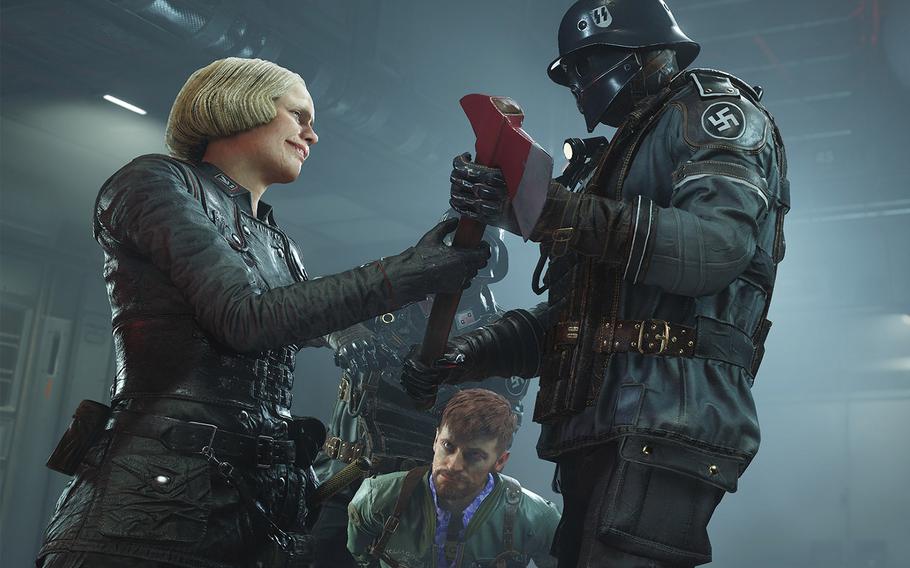 The Nazis in "Wolfenstein II: The New Colossus" are evil without shades of gray. (MachineGames)

It’s a strange world that we live in when a first-person shooter that features robot dogs and military bases on Venus can be relevant to today’s political landscape.

Yet, the marketing for “Wolfenstein II: The New Colossus,” which featured heavily riffs on modern-day political slogans, managed to make a 35-year old game series a political touchstone among the gaming community in 2017.

Pulling from current events to help sell your game is a genius move, from a marketing perspective. News sites that normal don’t involve themselves with the minutiae of the games industry brought the issue to light, exposing the game to people who otherwise wouldn’t even know of its existence.

But clever marketing does not a great game make. Could “Wolfenstein II” hold up on its own merits, as a video game? That was the question I had coming into the game, even as impressed as we were with the game’s predecessor. (Link: https://www.stripes.com/wolfenstein-enables-players-to-destroy-nazi-dreams-1.285684)

I am quite happy to report that it does. Not only is the game a marked improvement over “The New Order” in nearly every way, it also manages to separate itself from its modern-day competitors in several key ways.

For starters, “Colossus” is a strictly single-player affair. As has been the case for more than a decade now, too many shooters have been pulled in to too many directs, turning otherwise great games into bland messes that excite nobody. “Colossus,” in contrast, is a laser-focused, narrative-driven action title.

Once again players will step into the shoes of Nazi-killing terror William “B.J.” Blaskowicz as he attempts to single-handedly eradicate the Third Reich. In the world of “Colossus,” that’s a tall order, considering the Nazis have taken over the world and most organized resistance has been crushed.

“What if the Nazis won,” is a common enough theme for any number of books, television shows and movies. It continues to work well in video games because as far as enemies go, sci-fi Nazis with laser guns and genocidal tendencies remain relatively guilt-free cannon fodder.

As the game unfolds, Blaskowicz travels across the U.S. in an attempt to unify the remaining pockets of resistance. The story is fine, and the themes of American determination and unification resonated with me. How the story was told, however, could have been handled a bit better.

While every game has cutscenes, “Colossus” sort of abuses them as a story-telling device. While some of the world-building takes place in documents and newspapers you find scattered around each level, most of the story is told in well-done, but overly lengthy, cutscenes.

One egregious example is a nearly-ten-minute-long cutscene involving a surprise villainous cameo that ends up going exactly nowhere. MachineGamers seemed a bit overly infatuated with its story at times and some of the cutscenes just dragged the entire production down.

When you are in control of Blaskowicz though, the game shines. Each of the game’s 17 levels are intricately designed, with very few straight forward corridors to dutifully march down. Enemies take advantage of the open level design, finding flanking positions and using the geometry to circle around behind Blaskowicz. More than once I found myself impressed with how the levels allowed various tactics in any given scenario. Kudos to the level designers at MachineGames.

The gunplay is nearly as satisfying. With eleven guns to choose from, alongside his trusty hatchet of doom, Blaskowicz has plenty of weapons to choose from. Some of them, like a laser mini-gun of sorts, are pick-up and drop-off heavy weapons. Others, like my personal favorite – the assault rifle – are with you for the duration. Most of the weapons can be upgraded with various components like scopes and suppressors so you can tailor your favorites to your liking.

Part of what makes the combat so satisfying is that you never really have to worry about managing ammunition. Rounds are found everywhere, and enemies drop even more ammo. The gameplay is geared toward heavy running-and-gunning, with enemies circling around and charging your position on the regular, so it’s great that MachineGames ensured there are enough rounds that game never turns into a resource management sim.

Each weapon packs a decent punch, too. The impacts from (for example) the game’s shotgun variant are weighty and send enemies flying backward. A shooter lives or dies by its enjoyment in combat and while I enjoyed the story in “Colossus” well enough, I couldn’t wait to get back to the shooting bits.

MachineGames even added some side missions that allow you to return to levels you’ve already cleared to hunt down especially evil Nazis – basically giving players levels of pure combat, without any of that pesky story getting in the way.

Visually, the game is a treat, especially maxed on out PC. The bright, colorful areas like Roswell, N.M., are just as interesting to look at and explore as the bombed-out ruins of Nazi-controlled New York City. The character models are well-done and animation is solid, if not spectacular, across the board. At its worst, “Colossus” receives no complaints in the visual department, at its best, it’s impressive and exciting to look at.

I did have some issues with the controls on PC at first. The aim assistant always seemed too intent at moving to center mass of a target, making it more of a struggle to pull of headshots than necessary. When I moved to mouse-and-keyboard, however, those issues (as expected) went away. If you have the option, I’d highly recommend the mouse over the controller for this one.

My personal playtime clocked in at 13 hours, which is more than long enough for a single-player shooter. The ending fell a little flat, but it succeeds in wrapping up the game well-enough, while leaving plenty of room for the inevitable DLC and sequel.

I’d recommend this game to any fan of shooters, as this is easily one of the best single-player entries this year. It’s more of a pure shooter than something like this year’s “Prey,” so fans of more-action oriented titles will be a little more at home with “Colossus” than FPSs in that vein.

It does have a few show-stopping cutscenes, but for the most part, the game succeeds in creating a fun, engaging experience that puts a premium on all-out action.