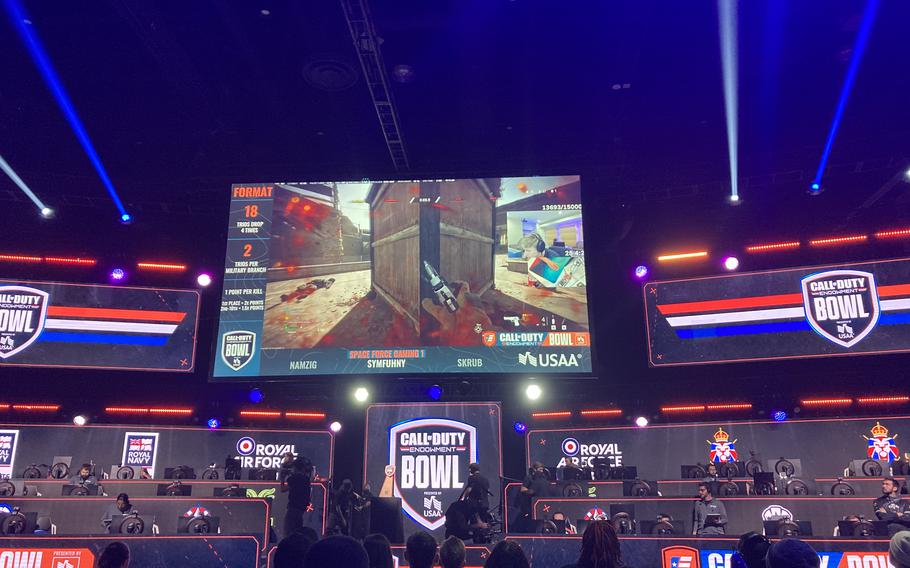 U.S. and British troops stepped into an intense digital battleground last week, but their adversaries weren’t Russian trolls or Chinese hackers. They were fellow service members with names like Redninjaturtle, Naz3re and Acquiesce.

And the battlefield was the Call of Duty Endowment Bowl, which featured a modified version of Warzone 2.0, the battle royale mode of the first-person shooter Call of Duty Modern Warfare II.

CODE Bowl III drew esports teams from each of the branches of the U.S. military as well as Britain’s Royal Air Force, army and navy. The event on Dec. 16 was part of the action at the multiday Call of Duty League tournament in Raleigh, N.C.

Although teams from various services have faced off in previous tournaments, it was the first time all of them competed at the same time, said Space Force Master Sgt. Mike Sullivan, who founded the Air Force and Space Force esports teams.

It also was the first time competition had occurred in a big-league setup, complete with major livestream coverage, giant screens, a three-tiered competitor platform and LED displays emblazoned with each service’s esports logo. For example, the Marines’ logo features a bulldog chewing on a game controller, the Space Force has a helmeted Guardian and the Navy has a cyborg goat, with the motto “Goats & Glory.”

The event was sponsored by the Call of Duty Endowment, an organization supported by Call of Duty’s publisher Activision and designed to help veterans find jobs. Before the competition, the endowment held a hiring seminar and job fair featuring employers such as Activision, Fidelity Investments, the Raleigh Police Department, tech companies and retailers.

But that afternoon, the focus shifted squarely onto the tournament.

Most of the services hold competitions to fill the rosters of their esports teams, which also compete in such games as Rocket League and Valorant.

In most cases, team members continue to hold regular military jobs. For example, Master Sgt. Ian Mills said his team includes Marines whose jobs range from combat engineer to military policeman at bases across the United States and even on Okinawa.

And most have a long history of gaming.

Most of the team members saw their military training as a key to success in multiplayer video games.

“We take that and apply it to the digital realm,” Mills said.

“It’s all about your IQ and your position in the game … and your gun skills,” Fletcher said.

But he thought another skill might give the Air Force team an edge: communications.

“We are good at communication and that translates into the game,” the airman said

But anyone who’s played Warzone or any other battle royale games knows that keeping teammates on track is important to survival.

Coast Guard Petty Officer 2nd Class Steve Medina said that he sometimes needs to restrain a teammate from getting overly aggressive – in other words, “Keep the lion in the cage.”

“If we get too competitive, there’s no fun in it,” Medina added.

And having fun is a key part of the equation. Many of the teams play together recreationally during their personal time.

And those connections went beyond fun during the isolation that occurred during the height of the COVID-19 pandemic, Sullivan said.

“It became a mental health and resiliency matter,” the guardian said.

For CODE Bowl, the services fielded two teams apiece — each with two service members and one profession player — for a total of 18 teams. The scores for both teams were combined to calculate the service’s results.

Fighting took place in the same dusty Middle Eastern town of al Mazrah that’s featured in the standard Warzone 2.0 game. However, with only 54 competitors instead of the usual 120, gameplay was modified to incorporate smaller maps and faster contraction of the circle that defines the available fighting space. This “mini-royale” made for action that was much faster and more intense than the standard game.

Warzone 2.0 was launched only a month before the competition, and the modified version only a matter of days beforehand, giving the team very little time to become familiar with the differences. 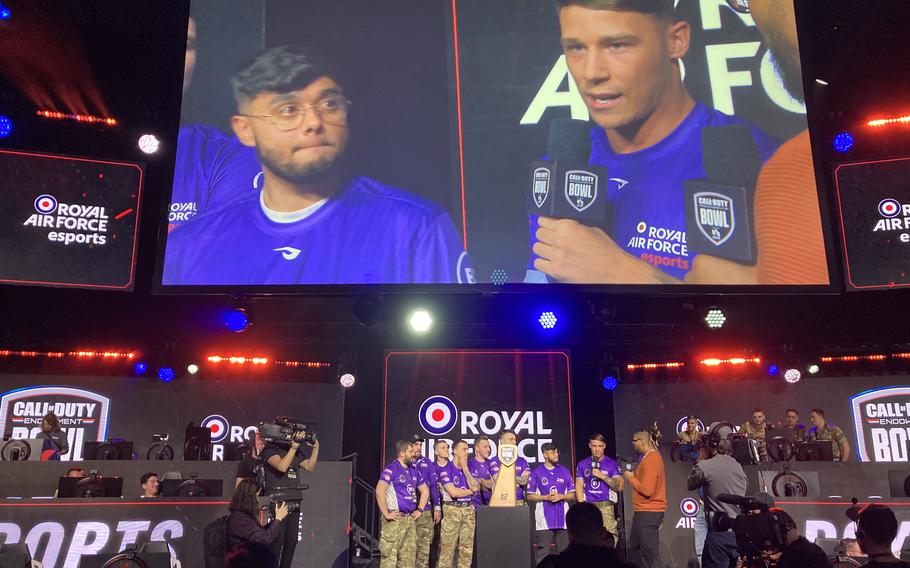 The Royal Air Force esports team celebrates its victory in CODE Bowl III on Dec. 16, 2022, in Raleigh, N.C. The RAF defeated teams from each of the U.S. and U.K. military branches.  (Brian Bowers/Stars and Stripes)

But the tight timeline wasn’t a big concern to the competitors.

“We adapt to shifting threats,” the Marines’ Mills said.

Fletcher said the Air Force team had a training day once they could get their hands on the modified version of Warzone and kept on playing. “We play it as much as we possibly can,” he said.

Each year’s CODE Bowl competition is for bragging rights and last year’s winner, Space Force, set the bar high – very high. They celebrated by launching their trophy into space and beaming back a video.

This year, other services were aiming to bring the trophy back to the ground – or at least back into the atmosphere.

Before the digital bullets began to fly, team members were confident.

And Medina proudly pointed out that his Coast Guard team had a strong record in military tournaments, and said the only reason Space Force won last year’s CODE Bowl was because the Coast Guard didn’t send a team.

In the Raleigh competition, the goal was to survive the longest and kill the most foes in each of four rounds.

After three rounds, the Air Force had won two and the Navy one, while Space Force consistently placed highly. If Vegas had been taking bets, these three probably would have been favored going into the final fight.

However, the top U.S. Air Force team was knocked out relatively early in the final round and Britain’s Royal Air Force racked up the points. 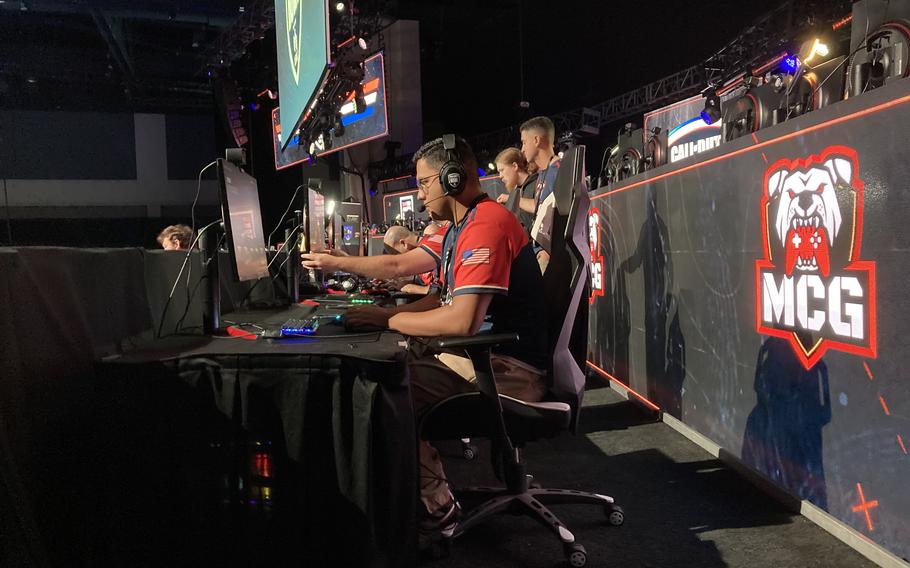 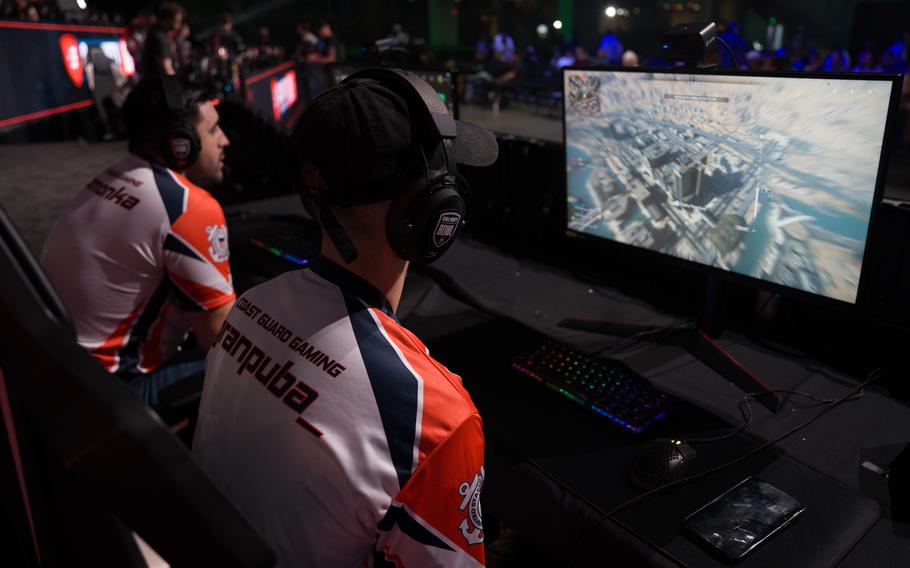 Members of the U.S. Coast Guard esports team drop into the action in Warzone 2.0, a battle royale mode of Call of Duty Modern Warfare II. They were participating in CODE Bowl III on Dec. 16, 2022, in Raleigh, N.C. (Jasmine Mieszala/Coast Guard Gaming)

When the scores were tabulated, the Royal Air Force team took the trophy – and the bragging rights. Space Force landed in second place and the U.S. Air Force took third.

But win or lose, some see it as a bonus just to have the opportunity.

“It’s crazy to think that playing video games is something you can do in the military,” Fletcher said. 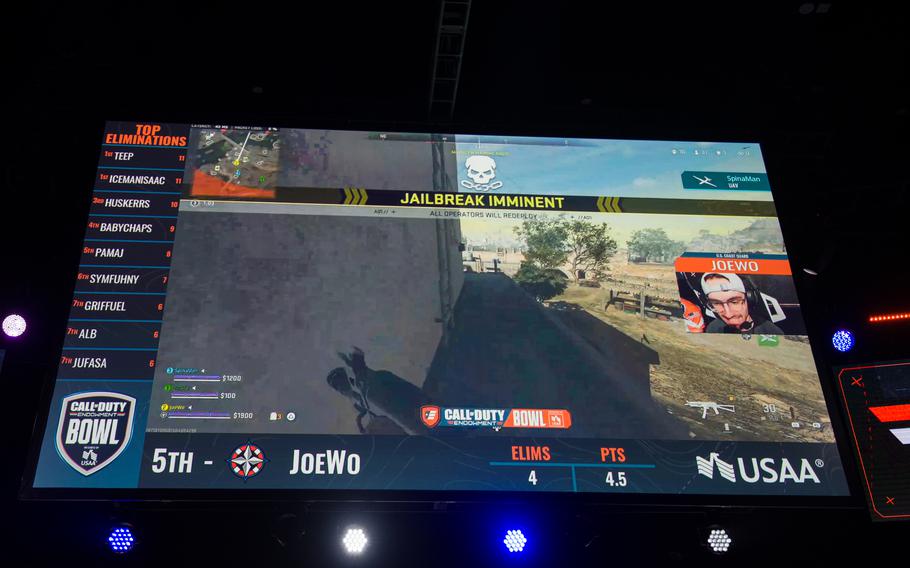 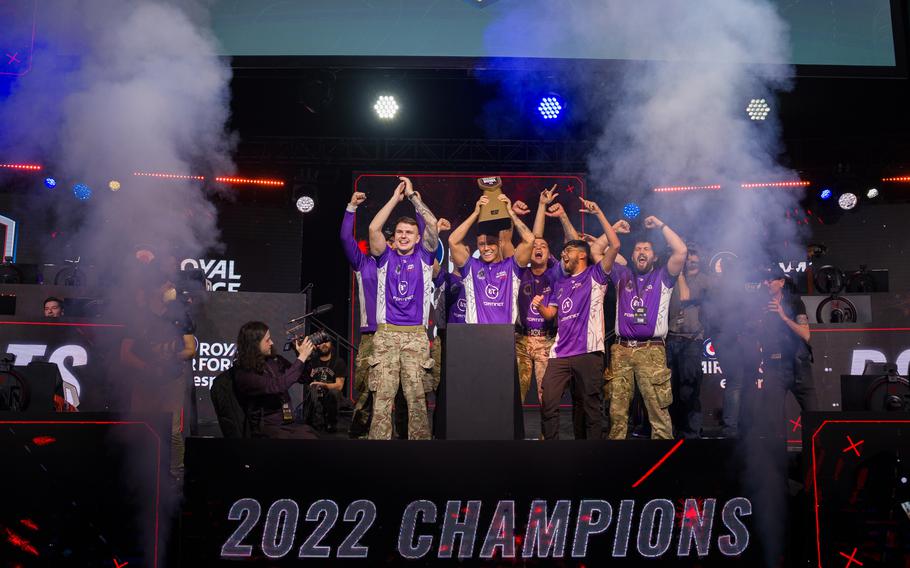 The Royal Air Force esports team celebrates its victory in CODE Bowl III on Dec. 16, 2022, in Raleigh, N.C. The RAF defeated teams from each of the U.S. and U.K. military branches. (Jasmine Mieszala/Coast Guard Gaming)