In Hello Neighbor 2, you search for clues in Mr. Peterson’s house that implicate him as a kidnapper. (tinyBuild)

Hello Neighbor 2 is a strange mashup of contradicting ideas. The first game, Hello Neighbor, was supposed to be an indie horror darling. But despite releasing at a moment when YouTube was littered with playthroughs of that sort of title, the game never reached the heights attained by its YouTube-fodder horror peers. And Eerie Guest's follow-up doesn't fare much better.

You play as an investigator looking into a person suspected of being a serial kidnapper. This person? Mr. Peterson, the cover boy for the franchise - the "neighbor" of Hello Neighbor. Narratively, the game implies that you're playing as the same main character of the last game, just grown up. This character, who is dyslexic, suffers from PTSD due to the events of the last game, where he himself became a victim of Mr. Peterson. Your goal is to find damning evidence of his kidnapping ways by infiltrating his home and searching for clues, all while avoiding Mr. Peterson as he skulks around trying to catch you.

It's a sound concept, but one that immediately stokes narrative confusion. The premise sets up an interesting gameplay loop, where you interact with various puzzles in the environment as stealthily as possible. But how does it make any sense for a player caught by Mr. Peterson to just ... be able to do it again, seconds later? The penalty for being caught is that Mr. Peterson throws you out of his house instead of, you know, kidnapping you - something he's already done to you in the past. 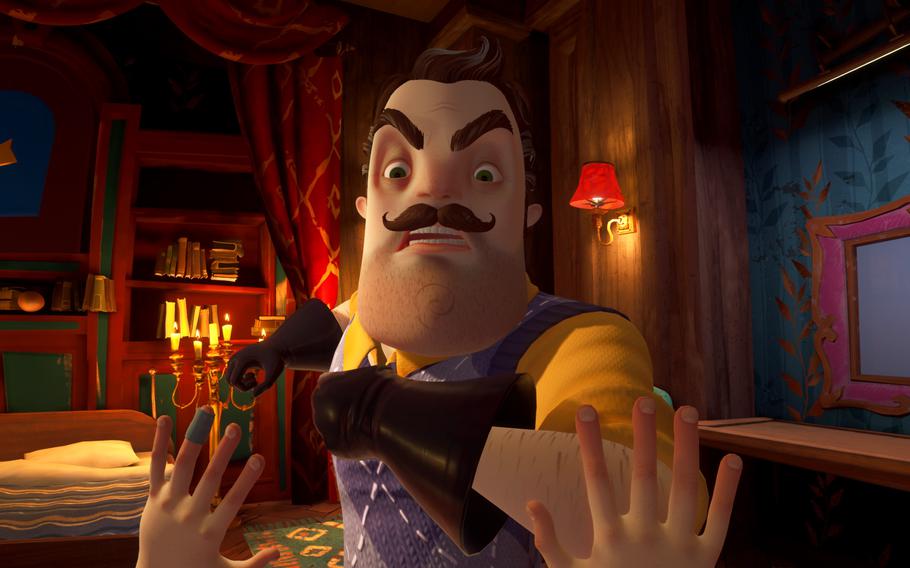 In Hello Neighbor 2, you search for clues in Mr. Peterson’s house that implicate him as a kidnapper. If he catches you, he throws you out. (tinyBuild)

This narrative disconnect is evident everywhere in this game, which is a shame. Hello Neighbor 2 really does improve several gameplay elements that hampered the previous title. But in totality, this stealth horror title is somehow more frustrating than scary.

Let's talk about the gameplay first. The core mechanics from the first game are still in place. It's essentially a first-person point-and-click adventure, with you solving puzzles that are naturally blended in with their environment (like putting together pieces of a photograph that you find throughout the house). The game never spells out what precisely you should be doing, so it's up to you and your powers of observation to figure out how to unlock the next puzzle to progress. Notice that the buttons of a cash register are missing? Well, you've got to find them, put them back on the register and press the buttons in a specific order to open it. That'll reveal a key that unlocks the door to the next area. The entire game is basically that sort of experience.

The twist is that you can't just explore at your own pace. Your neighbors will walk around their homes as you snoop around searching for clues, and they'll kick you out if they catch you. You have the ability to hide in things like closets should they be nearby, but this isn't always a guaranteed solution. 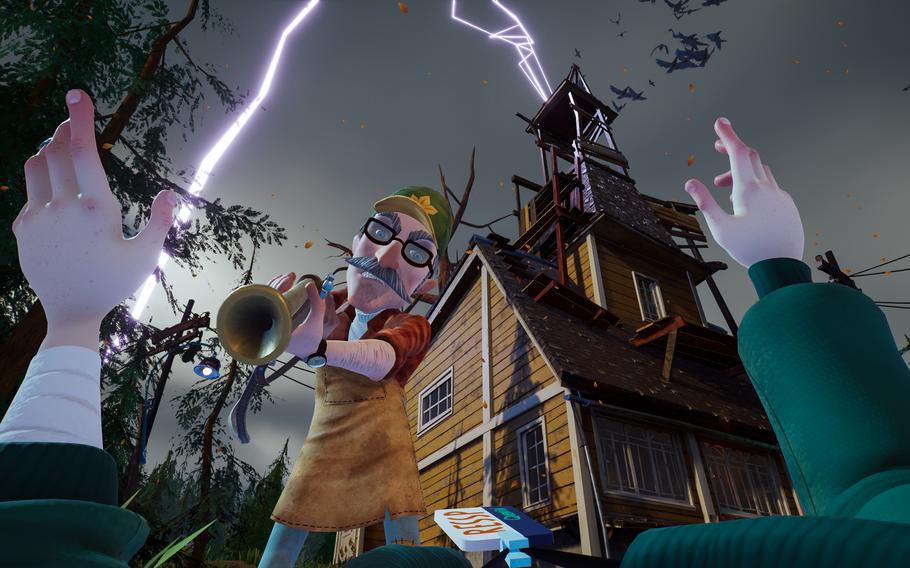 Hello Neighbor 2 expands on the original game by giving you more stuff to explore. You’re free to roam an entire neighborhood this time around, instead of just Mr. Peterson’s manor.  (tinyBuild)

Hello Neighbor 2 expands on the original game by giving you more stuff to explore. You're free to roam an entire neighborhood this time around, instead of just the Dr. Seussian manor of Mr. Peterson from the last game. This is a welcome change of pace, because players can't get too comfortable with their environments and constantly use the same hiding spots from their pursuers. You also have access to new tools, like a drone that gives you an aerial view of the neighborhood, which can be helpful for planning out how to evade the neighbors. Finally, and most fortunately, the wonky physics engine of the previous game appears to be gone. In the previous game, you could do illogical things to get around puzzles, like stacking cardboard boxes to access areas before you're supposed to. Nothing like that exists here.

Unfortunately, though, the improvements from the previous game begin and end with the gameplay. Hello Neighbor 2 still has the aesthetic design of the previous game. It's goofy and cartoonish, with a Pixar-like charm to it. The problem with this design, though, is that it directly conflicts with the genre the game is going for. Hello Neighbor 2 bills itself as a "stealth horror" game, but it's kind of hard to take scares seriously when they're coming at you from characters who look ripped straight out of a Saturday morning cartoon lineup.

The problem, I think, is that the game rarely sets up its horror. The best horror films and games ramp up the tension - and release with a scare. But a neighbor coming up to you and catching you while you attempt to solve a puzzle mostly just feels random. There's no setup - just surprise from something you couldn't possibly foresee. More often than not, as I hid in closets from my pursuers, I felt frustrated rather than scared. I either wanted to continue what I was doing before, or for the pursuers to find me just to get it over with. 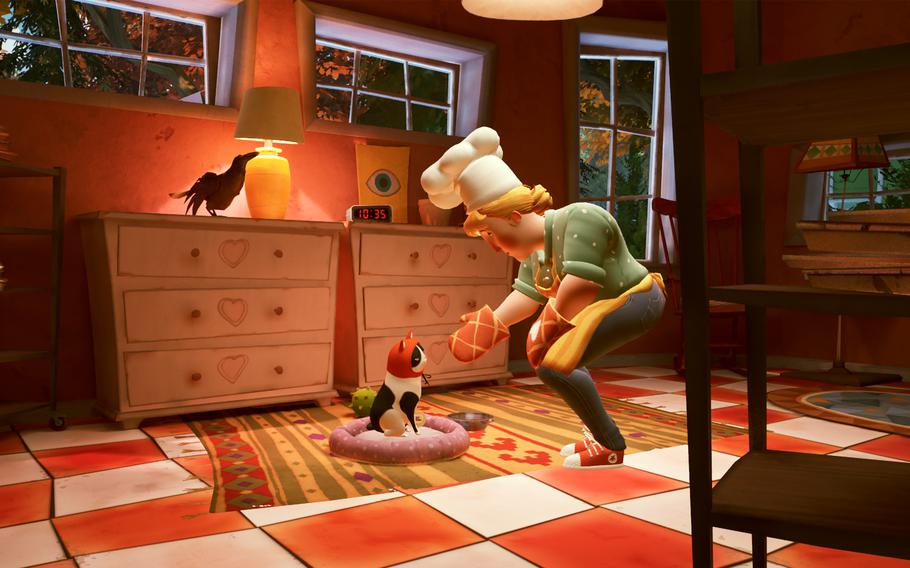 In Hello Neighbor 2, players must hide from neighbors, which are roaming around their homes as players invade to search for clues. (tinyBuild)

The narrative also doesn't make any sense, no matter how you try to piece everything together. Sometimes, after getting caught by a neighbor, you'll wake up in bed, implying that a part of this game - or maybe all of it - is just taking place in the mind of the main character. There is a twisted, cartoonish logic to this; we know the main character has PTSD from being kidnapped, after all. But then, something happens at the end of this game that implies everything we're experiencing is actually real. The new design of Mr. Peterson's house - which is no longer Dr. Seussian and has realistic features and proportions - seems to imply the events are real too.

The original Hello Neighbor came out around the same time as another indie horror title that revolutionized YouTube trends. That game? Five Nights at Freddy's, or FNAF. The game broke viewership records for popular YouTubers like Markiplier and spawned a whole subgenre of content creators dedicated to digging into the complicated lore of the games. YouTube viewers ate up FNAF content. Watching a horror game alongside a likable personality was a palatable alternative to playing for skittish gamers. It was also just plain fun watching YouTubers analyze what the heck was going on in the story. 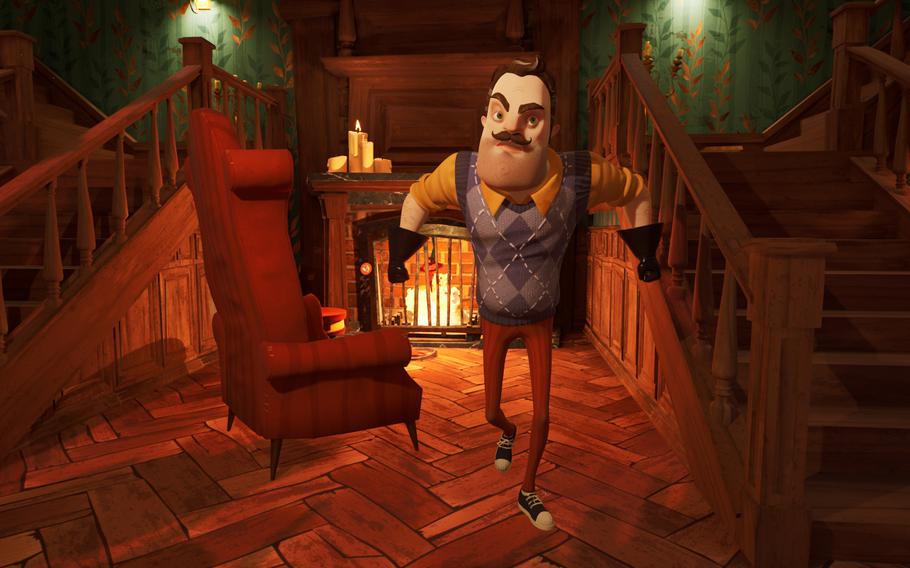 Hello Neighbor 2 never spells out what precisely players should be doing, so it’s a matter of guesswork and powers of observation to figure out how to unlock the next puzzle to progress.  (tinyBuild)

Fans have made their disappointment apparent. The metacritic score for the final release of the original game is among the lowest in the indie horror genre. It's easy to imagine something similar happening with the sequel.

There are glimpses of something special in the Hello Neighbor franchise, and Eerie Guest promises in an end game screen that more content is forthcoming. Let's just hope whatever they come up with offers more horror and more intrigue - and less mystery around why we're playing these games in the first place.