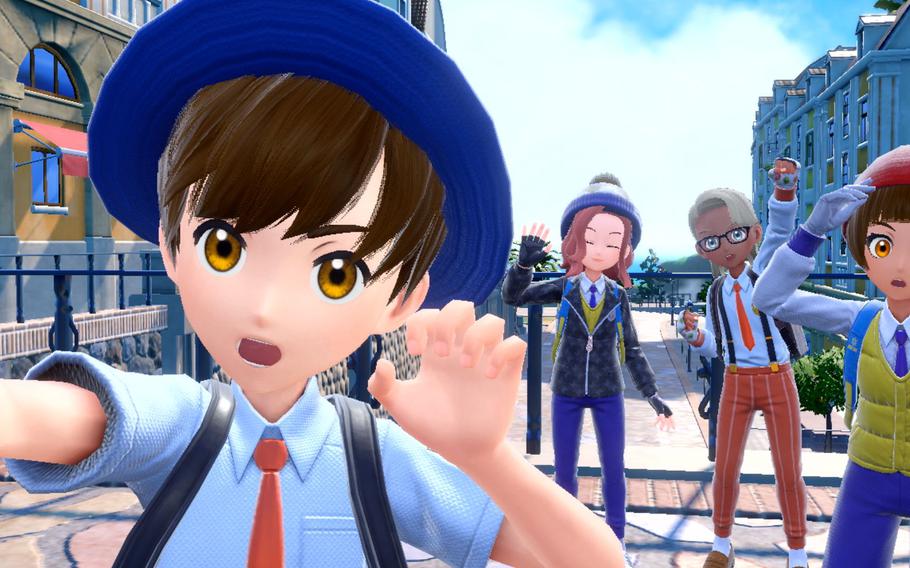 Pokémon Violet and Scarlet are must-have games for the Switch.  (Nintendo)

With the console wars heating up, it is worth wondering where does Nintendo Switch stand in this war? As PlayStation and Microsoft duke it out over Call of Duty, Nintendo has been publishing platform exclusive after platform exclusive.

The question that begs to be asked is how these games hold up?

Let us dive into Pokemon Violet – the latest pokemon game – to get that answer.

With decades of Pokémon experience, I was prepared to once again catch them all, but since I wanted to write a timely review. I decided to catch some, level up a few, and beat the storyline quickly.

The story begins with your character attending his first day of school. The school’s director visits your home to apologize for not sending orientation documents.

You’re then introduced to three different Pokémon: a fire type; a water type; a grass type.

I went with the fire type crocodile, Fuecoco. (A strong choice for players, since he will be a dual-type Pokémon by the final evolution.)

After picking your Pokémon, you are suddenly introduced to Arven, a character whose request will send you on a series of side missions. You then trot your way to the center of the map where the academy is conveniently located.

Outside the campus is a bunch of bullies who you can choose to confront. They introduce themselves as Team Star.

After familiarizing yourself with the campus, you go back to your dorm room and sleep.

The next morning you attend a ceremony outside on the school grounds. The director tasks the students of the academy to find their treasure. The “treasure” will be found in three storylines.

The first narrative is the typical path of Pokémon trainers, which is battling with Pokémon to become champion.

The second is beating Team Star, but the storyline evolves into understanding why team exists in the first place.

The third plot is finding magical herbs with Arven, which takes you across all parts of the region to find these herbs

Pokémon Violet and Scarlet are must-have games for the Switch.

This version of Pokémon is crafted perfectly for veteran and novice players.

I appreciated that it was possible to gain experience points to level up Pokémon by having automatic battles with wild Pokémon and capturing new Pokémon.

The storylines themselves were captivating as they were difficult. This meant that if you hope to beat the campaign, you will have to play all storylines and capture a good deal of Pokémon to get to the endgame.

I would recommend this game to anyone with a Switch.

However, if you are looking to play something a little more on the wild side, I have something in mind for you.

When I think of Nintendo exclusive games, Bayonetta is not the first franchise that comes to mind. I think of Pokémon or – something family friendly.

Bayonetta 3 does not pretend to be that. (Although, if you want a more PG version, you can play in Naïve Angel Mode. I didn’t.)

The game provided a vastly different experience that would change my perception of what is truly a Nintendo game.

First, let me dive into the campaign.

The campaign begins with playing an alternate version of Bayonetta.

After button mashing for a little bit, Bayonetta is quickly defeated by the mysterious Singularity. This leads Bayonetta’s friend, Viola, to travel to an alternate universe.

In the second universe, a second Bayonetta is introduced and quickly enters a battle against monsters dispatched by the main villain Singularity.

Bayonetta is quickly joined by her friend Jeanne in combat to battle the monsters.

Both Bayonetta and Jeanne retreat into Rodin’s bar. Rodin, the arms dealer from hell, then begins to explain that the monsters aren’t from supernatural plains of existence. Viola then introduces herself and explains where the monsters come from and the threat to their world posed by Singularity.

Viola presents a solution to the second Bayonetta and Jeanne to find gears that can help defeat Singularity.

The campaign ensues from there.

The rest of the campaign is a hack and slash adventure that tests your ability to button-mash through some difficult challenges.

As you traverse through bosses and hordes of minions, you will find Bayonetta has unique outfit choices.

There is a better part of a level where Bayonetta wears a revealing swimsuit while dancing on a giant spider.

This doesn’t detract from the multiverse plot which will keep you entertained, but I wouldn’t recommend this for younger audiences if you have an issue with nudity.

I would buy this game if you were looking to play a mature Nintendo exclusive.

With that said, why combine two reviews into one?

It isn’t simply to make one of my managing editors, Brian, a happy camper so he can save on inches when publishing for the print version.

It’s because these two games respectively demonstrate the complexity of Nintendo’s overall situation in the console war – which is waged largely between Xbox and Sony.

While Xbox and Sony owners battle over the teraflops that their respective consoles display, Nintendo is fending for itself pretty well.

Nintendo’s vitality comes from appealing to wide audiences with memorable characters and gameplay, which these games accomplish.

Pokémon accomplishes that easily with its story, familiar gameplay, and constantly improving features.

Bayonetta is truly for a unique audience and doesn’t fit the typical family friendly play that Nintendo generally offers. Yet Bayonetta proudly waves its banner as a Nintendo exclusive, regardless of first appearing on Xbox and PlayStation.

As it stands, Bayonetta 3 is best known for its memorable characters.

Bayonetta’s existence on the Switch is simply proof that the company is willing to go outside the realm of family friendly games to ensure that Nintendo appeals to its vast audience.

In other words, you will find the qualities of a Nintendo exclusive in each, despite their differences.