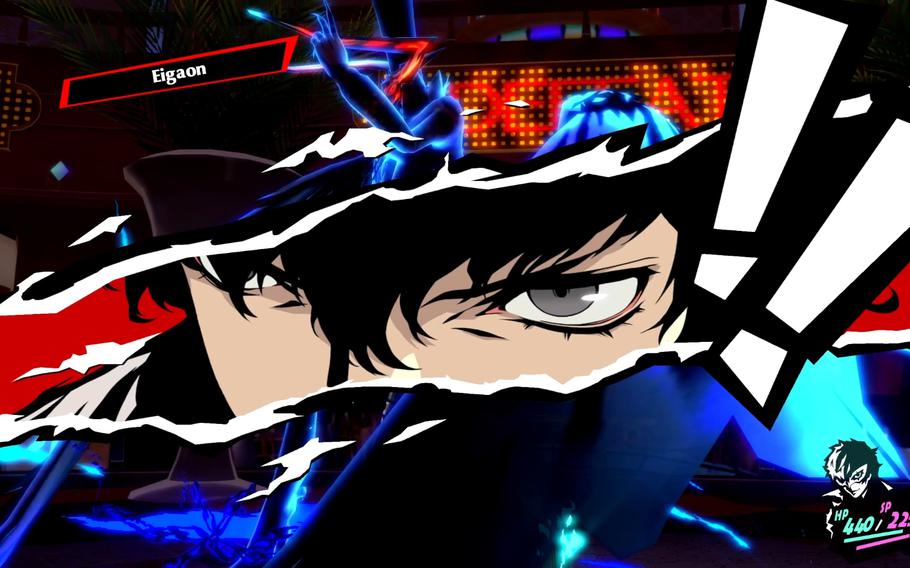 Gamers play as Joker, a new student transfer who rounds up a team of students to fight monsters in the JRPG Persona 5 Royal. (Atlus)

It very well may be the greatest JRPG ever made.

In a way, this is all you need to know about Persona 5 Royal, the wild and crazy role-playing game from the minds of Atlus and Sega. Released six years ago as a PlayStation title, it’s an ultra-intense JRPG that blends a gutsy, captivating story with characters who jump to life and feel distinct and stunning anime-level visuals.

The rerelease on multiple consoles, however, takes things to another level for a variety of reasons. Now that the game has made the jump to the Xbox Series X and the Nintendo Switch, it’s found new and stunning levels of portability. Over the last six years, I’ve burned weekend upon weekend sitting on my couch playing Persona 5. Now, I can do it on planes, on the train, and anywhere I want to play the title.

We’ll get to that in a moment, but first the basics of why Persona 5 is spectacular, and it starts with a terrific story and an excellent battle system. At its core, Persona 5 is like most JRPGs, delivering a turn-based battling experience and letting you traverse some sort of open world. But no RPG creates levels to the turn-based experience quite like Persona. As the game goes on, you gradually learn evermore wrinkles, speaking to enemies to get them to join your team, and using their abilities to augment those of key characters. 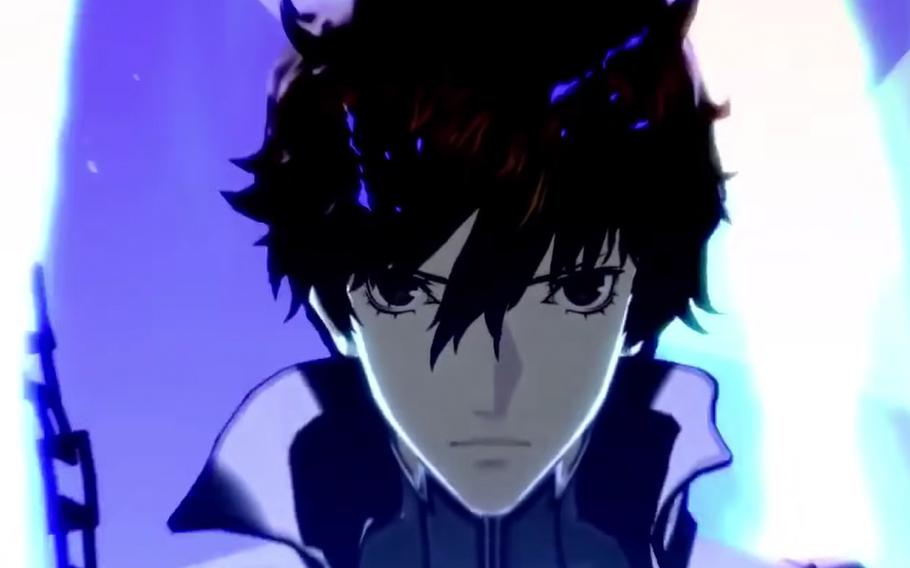 Joker, the main character in Persona 5 Royal, is a new student transfer who forms a team of heroes known as the Phantom Thieves. (Atlus)

Monster-fusing becomes a big (and terrifically enjoyable) part of this game, as you combine enemies who’ve joined your fight into more and more vicious assistants. That core gameplay is augmented by a terrific story: You play as Joker, a character who’s been in some trouble in recent years and, as a result of that, has had to transfer to a different school. And eventually, you form a team of heroes known as the Phantom Thieves, who essentially head into the minds of some questionable people, battling their inner consciousnesses and eventually pushing them to confess back in the “real world.” It’s "Inception," video-game style, and with a little more conscience, too. The game regularly finds ways to make you wonder if what you’re doing is right. 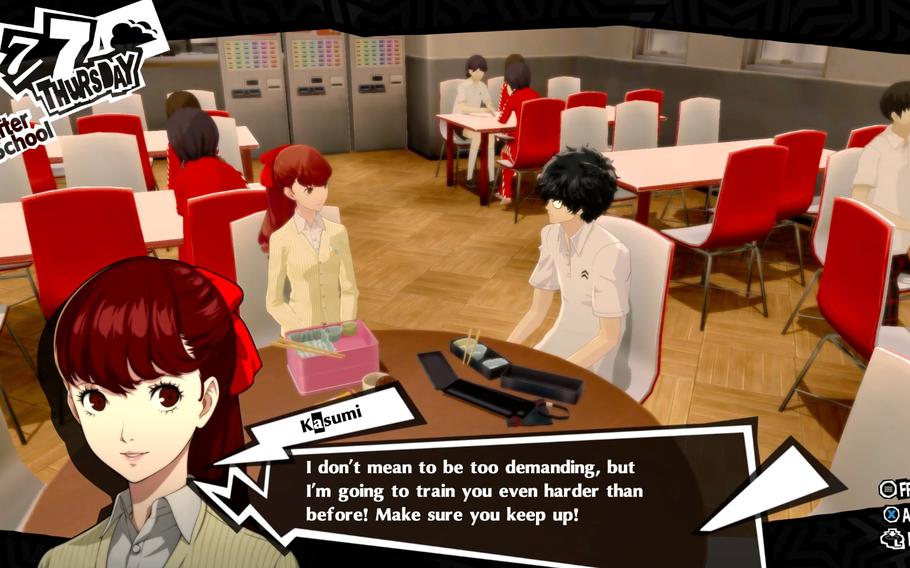 Players are students who must keep up with regular school and school-related activities throughout the game. (Atlus)

In between all this battling, you play the part of the student, buying books from a local bookstore, cleaning your room, and answering legitimately hard trivia questions in class. You also build relationships with your team (if you so choose, that is), and, in classic JRPG fashion, maybe push toward a romance.

It was a perfectly balanced JRPG six years ago, and with its rerelease, it somehow becomes even more flawless. That’s in part because both new console permit you to now play Persona 5 on the go.

The Nintendo Switch version is impressive, to say the least. Not all games (see: MLB: The Show) translate flawlessly to the Switch, but Persona 5 makes the move perfectly. There’s nary a frame rate drop-off, and the visuals are as crisp and clear as what I remember from the PlayStation 4 version I’ve been playing for years. Sound is great too. And especially on the Switch OLED, the action is vibrant and easy to follow, even on the small screen. That’s courtesy of the details and excellently drawn characters and villains, each of whom jump to life. 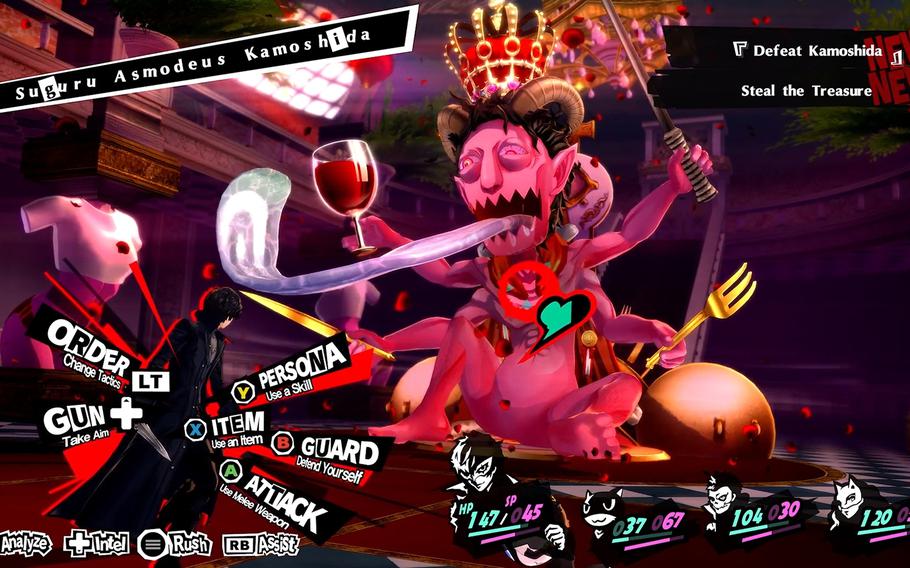 In Persona 5 Royal, a team of students known as the Phantom Thieves battle monsters. (Atlus)

The Xbox Series X version has a bit more pop on the big screen, as you might imagine. But the truly magical victory here is that I can play the game on a (much) smaller screen too. This is an Xbox Game Pass title, so by downloading Game Pass on an appropriate Android device (like my Samsung Galaxy Z Fold 4), I can actually play the game right on my phone. Sure, on some phones, this won’t play out well, but on the Fold, I can see everything, especially when paired with a controller (removing the on-screen controls from the equation). It’s an experience I’ve rapidly grown addicted to, a satisfying way to game that I never thought possible.

By bringing it to PC, Switch, and Xbox, Atlus and Sega managed to make it even better.