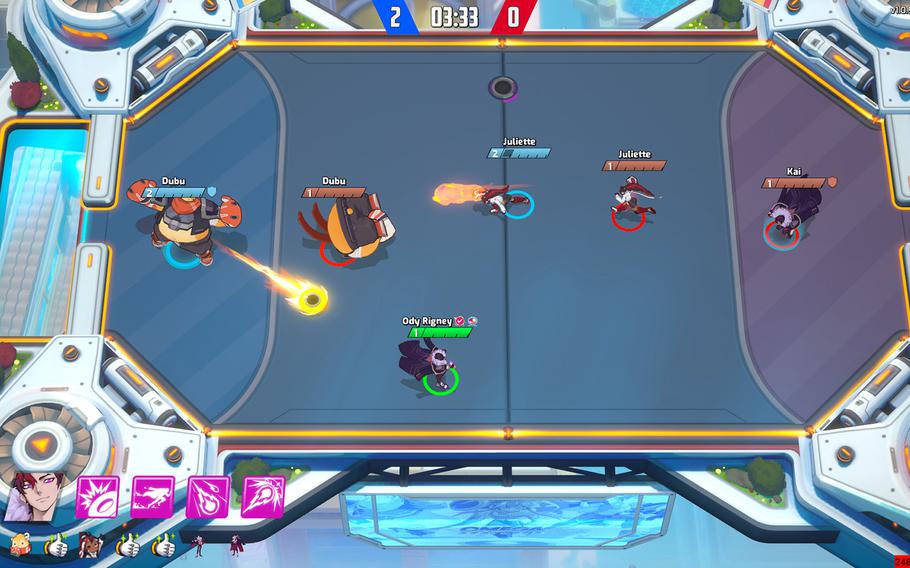 Omega Strikers pits teams of 3 against each other in a game where hitting the pucklike Core into the goal is essential. (Odyssey Interactive)

At first glance, Omega Strikers looks a little like air hockey. You see an object in the center called the Core and it bounces around the map like a puck. The goal of the game is to hit the Core into the goal. But beyond that superficial comparison, that’s where the similarities end. Observers will notice that there are no paddles, but instead, players control one of six characters on the map in a 3v3 online competition.

Odyssey Interactive describes its debut project as having the goal-focused gameplay of Rocket League, the physical fun of Super Smash Bros. and the character depth of League of Legends. After playing a bit of the closed beta, that description nearly hits the mark. Omega Strikers is a mishmash of all those games, and it also happens to be incredibly addictive.

A mix of influences

The Rocket League comparison is obvious as two teams try to knock the Core into each other’s goal. Players have one person playing the goalie role and two forwards that try to knock the ball forward. The Smash influence can be seen in how players can gain an advantage by attacking opponents, and if their stamina goes down, they’re knocked out creating a short numbers-advantage powerplay.

Lastly, the League influence is evident in the characters. It also shouldn’t be a surprise because several Riot Game leads founded Odyssey Interactive. The closed beta features 10 characters with more being added. They all have distinct personalities and abilities that make them better for certain roles.

For example, Dobu who looks like a fat hamster is perfect for a goalie. He has moves that block an area and his toughness makes him hard to take down. His big body also helps block incoming shots. On the other hand, X is a brute whose attacks make him great for pummeling other players in order to create an advantage. His special moves require a warm-up often and can be a bit messy.

Each of the characters has a simple attack and three special moves. The characters also level up based on how much they interact with the Core and other characters, hitting level 10 over the course of the match. 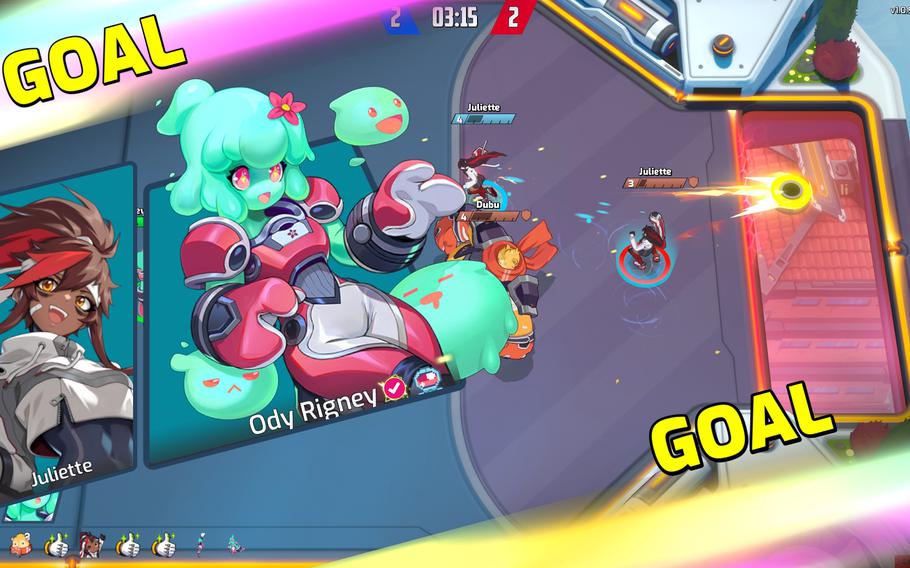 The current closed beta stage of Omega Strikers features 10 characters with more being added. They all have distinct personalities and abilities that make them better for certain roles. (Odyssey Interactive)

Adjusting to the learning curve

Initially, the game felt chaotic. Players are just running around after the Core like 8-year-olds playing soccer, but the longer I played, the more I noticed the subtle nuances. Timing plays a big role as players have hit the Core at just the right time and angle to send it flying the right way. They also have to know their characters’ moves, which can also knock the puck around or it can also smash enemies.

The big issue is that there’s so much going on the screen, and it’s so frenzied at times that it can be hard to figure out where your character is and what you should do. Players have to keep an eye on the opponents, their character and the Core. If they find themselves being attacked, they should go after healing items scattered on the map or head to the goal area where defense is increased.

When using special moves, they have to know the best time to activate them. Some are powerful but they heavy very long cooldowns. It would have been interesting if the moves were a bit extravagant or if Odyssey Interactive thought more out of the box with them. Many of the forwards’ moves seem focused on attacking opponents and nothing is focused on debuffs or changing the field of play.

It’s a lot to take in, but the learning curve isn’t impossibly steep. After a few matches, I got the feel for combat vs. goal-scoring. I also felt that the game played better on controller than mouse and keyboard. Omega Strikers is out as a closed beta on Steam and will launch on mobile and all major consoles in the future.

Polish in the closed beta

From what I played, the game is polished with beautiful characters and a fun concept. It looks a lot better than the screenshots give it credit for. The matches themselves last four minutes long with a game concluding when a team hits 5 goals but the caveat is that they have to win by 2. That leads to a quick churn in matches and that’s a huge plus.

That means players can jump in for a quick game or they can have longer sessions that don’t feel overly burdensome. Players can easily get into a one-more-match feel, and a promise to play one hour can easily stretch to three.

Best of all, Odyssey Interactive said Omega Strikers is free-to-play with no loot boxes. Players can earn in-game currency through matches and use them to purchase new characters or cosmetics. There’s an alternate currency that players I assume players can purchase with real-world money.

All of it amounts to a promising package that gamers should keep an eye out for.