Something for everyone, and then some 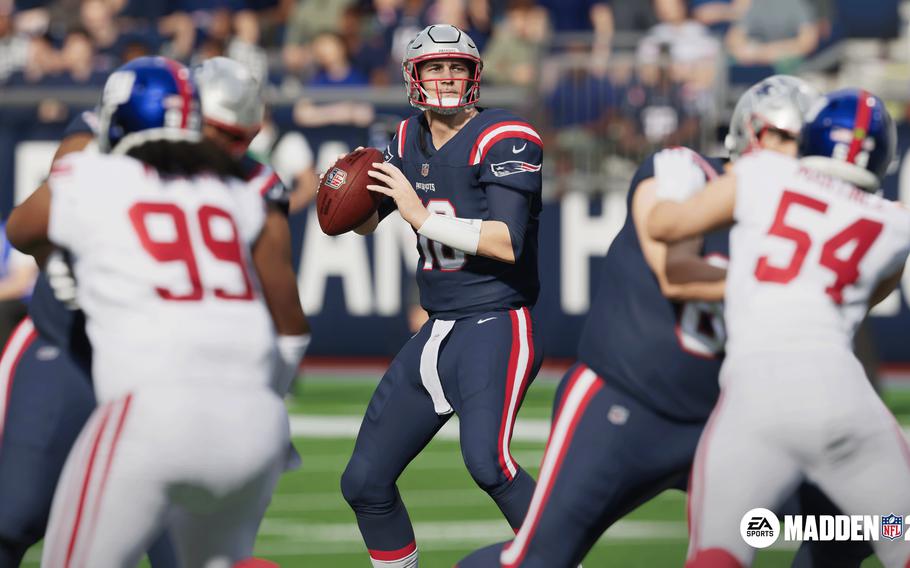 The overload of options in Madden 23 means there are lots of things to do, but also much to complain about. (EA Sports)

The familiar slogan of EA Sports greets players at the beginning of Madden NFL 23, voiced by none other than the game's namesake and hall of fame coach, John Madden. The quote triggers a time machine, whisking players back through the decades to relive both the remarkable football career of Madden, who passed away in December of 2021, as well as the long history of a video game franchise born in 1988 on the Commodore 64 and Apple II. Even beyond the intro sequence, the first substantive gameplay pits legendary players from past "All Madden" teams against one another, while two different digital versions of Madden lead from the sidelines. Tom Brady, Brett Favre, Barry Sanders, Marcus Allen and a collection of other fan favorites from my youth get players acquainted with the latest edition of the annual NFL simulation, breaking at halftime for a moving tribute of Madden's life.

It's a lovely first touch from EA Sports. Watching and playing with the former gridiron heroes, it was impossible not to recall the many hours of my life spent playing Madden games with my brothers-in-law, and before that my college friends, and before that the first time I ever played Madden on Sega Genesis after school at my sitter's house. It was a deeply personal experience — and nostalgia is a powerful drug.

Ironically, that prism, which colored my opening experience of Madden 23, also framed my frustrations with recent installments of the franchise. As I played (and sometimes endured) Madden 23, I found myself longing for the simpler days — and Madden games — of yesteryear.

I am not alone in the sentiment that the quality of games in the commercially successful franchise — and the only football simulation officially endorsed by the NFL — has waned in recent years. The series' rating on Metacritic for PlayStation 4 and 5 (the platform on which I conducted this review) has plummeted since Madden 2019, dipping from 80 that year to 76 then 63 for Madden 20 and 21 respectively. The gripes have centered on various bugs, unrealistic physics in games and a seeming emphasis on the game's Ultimate Team mode, in which users strive to collect a lineup of players through a combination of grinding gameplay and in-game card pack purchases, in which random chance determines the players users receive. The mode, also found in EA's other sports properties like FIFA and NHL, has been a cash cow for the game publisher and a source of derision from players who think the company is focusing too much on milking profits from Ultimate Team at the cost of ignoring other issues with the game.

Those criticisms are fair and indicative of how difficult it is to create a product that tries to please everyone. Given the additions that have further swollen each new installment of Madden, by now there is surely something for everyone to enjoy somewhere inside the hulking behemoth that is Madden 23. But given the sheer volume of stuff crammed into a modern Madden package, there's also something for everyone to complain about, because the enjoyable bits are often obscured by other unnecessary, unsatisfying elements. The core gameplay that delighted players all those years ago still exists. You just have to search for it in the bowels of a now-bloated beast.

With a game as vast as Madden, which offers a plethora of ways to engage — from regular 11-on-11 games, to skill competitions, to three-on-three matchups, to player creation, to Ultimate Team building and even something akin to an economic market simulation with its Owner role in franchise mode — there are more options than any one player could possibly want. Different modes will appeal to different players. It's unlikely that anyone, absent reviewers, is spending significant time with every single mode in the game. For most normal users, much of the game is empty calories.

Consider the time-sucking tasks that now mar my favorite mode: Franchise. Building a roster over the years is a fun exercise for a football fan like me, one who enjoys keeper leagues in fantasy football and closely follows the NFL draft and free agency periods. But I don't enjoy the superfluous off-the-field portions of the Franchise mode in Madden 23.

For starters, I do not care about the individual skill point allocation of a players' development. I certainly do not care about copy-and-paste text dialogue cutscenes "simulating" interactions between coaches and players and/or the media to activate bonuses or rank up a particular statistic. And I really, really, do not care about upgrading a coaching staff's skill tree using experience points to unlock team-wide player enhancements, especially when the game doesn't properly award those experience points for completed challenges. (On several occasions, a challenge to hold an opponent to 14 points or fewer was marked incomplete despite achieving that goal.) All of that is gamified fluff that exists solely to serve the god of "MORE." Oh, how I hope to see it sacrificed someday to the god of "LESS."

While I can eliminate some of these mundane tasks and cutscenes through menu options, these features create a tangled jungle I annoyingly need to navigate to rekindle the fun of playing. There are 46 (46!) different adjustable league settings for the franchise mode. These include two that allow the autoprogression of players and talents, and another that will automatically set your team's game plan. (Mystifyingly, the default offensive plan for one game focused on the Baltimore Ravens' propensity to blitz with ... kicker Justin Tucker. If you really care about your game plan, utilize this option at your own risk.) 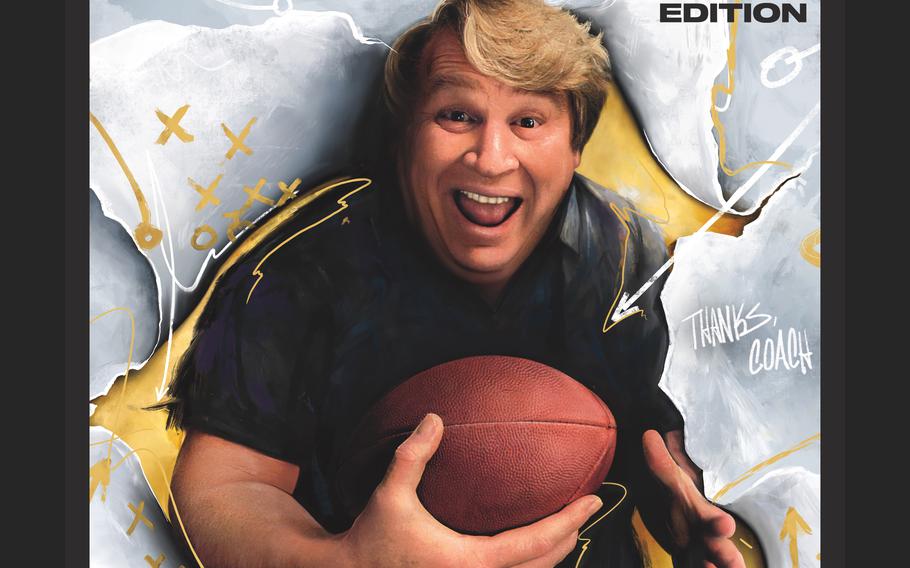 Even with all these tasks automated through menu options, I was still asked to specify which skill attributes I wanted to upgrade between games for franchise pillars such as the Cincinnati Bengals' backup quarterback (I challenge you to name him!) and punter. My game also froze and required a restart after upgrading running back Joe Mixon's special talent. This is all inertia I don't need when I just want to modify my depth chart, plan for free agency and the draft and play some football in Franchise mode.

I don't care if the commentator audio gets the score, stats or situations wrong from time to time (though it did multiple times during my review play). I do care if I spend 20% of my playing time performing chores I don't want. I shouldn't need a machete to carve out a fun experience in a video game.

With so much time required to upgrade players and coach skill trees between games and after training sessions (effectively two instances of role-playing game mechanics wedged between each football sim) with the default settings, I utilized the option to only play the "key moments." One key moment was the second-half kickoff of a preseason game I was leading 14-7. After fielding the kick 8-yards deep in my own end zone, I took a knee like any sensible kick returner. The game alerted me that my "key moment" was "missed." Alas that the Bengals' second-string returner missed an exhibition game opportunity to be tackled at Cincinnati's 18-yard line. I grieve for his family and all of the Queen City.

Those key moments regularly dropped me into the game at questionable times, asking me to select a play, and then alerting me it was the two-minute warning or that the opposing team had called a time out, dropping me back to the play-calling screen. That feels ... unnecessary. Conversely, my Giants team once lined up for an offensive snap in the middle of a game only for me to see backup QB Tyrod Taylor under center instead of Daniel Jones. After the game, the injury report noted Jones had a dislocated knee, though I never received an alert of that news during or after the game. An update on the long-term health of your starting quarterback in a franchise mode feels like essential information users shouldn't have to seek out.

The real shame is that all of those little frustrations obscure the fact that the on-field gameplay feels much better than it has in recent seasons. The introduction of the new FieldSENSE systems, which provide added user control to better deliver accurate passes in more precise locations defined by the user, is a fantastic addition to the game, allowing skilled players to throw open receiver who may otherwise be covered. Previously, challenging a defensive back running stride for stride with a receiver wasn't an option, likely yielding an interception. Now, a back-shoulder throw could produce a helpful first down.

The increased use of player physics, though not flawless, produces a more realistic flow to the action, as bodies collide around the field. There are still a few notable instances where linebackers engaged with 300-pound linemen are able to shed their blocker a bit too easily and seemingly teleport for a tackle as the running back hits a hole, but they seemed to occur less frequently compared to previous years. To me, this improvement in the core product is an encouraging sign, and one I hope EA rallies around in the years to come.

After stuffing new features into Madden over the 34 years since its debut, there's now a ton of junk crammed in that is nowhere to be found in football and, as such, has no place in a football sim. Bill Belichick isn't walking into Foxborough asking Josh McDaniels, "Hey, what branch of the skill tree should we unlock today?" No quote from Mike McCarthy at a news conference is going to improve Dak Prescott's passing accuracy by 10 percent in the next game. Simply put, it's not in the game. And by adding it, EA is making their game that much less enjoyable to fans who value authenticity — as John Madden did.

Once you carve away most of the fat, Madden 23 is a better incarnation of the game than those of the recent past. Even its Metacritic score (70, as of Aug. 24) has started to trend back up. But there's more to shave down, and that work should not fall to player customization. What EA — and Madden fans — would truly benefit from is a leaner, cleaner finished product.

Coach Madden spent years meeting with the game's developers to ensure the authenticity of a product that bears his name. As they honor his legacy in Madden 23 and the games to come, they'd do well to remember: If it's in the game, it's in the game. If it's not, get it out.