Saints Row puts fun ahead of realism: You can blaze through pretty much anything short of a building without slowing down. (Volition)

Saints Row is an open-world action game series that has defined itself for being sheer, dumb fun. If Hangar 13’s Mafia series is the “The Godfather” of video games and Rockstar Games’ Grand Theft Auto series is “Goodfellas,” then Volition’s Saints Row is “The Fast and the Furious” with dabbing, hoverbikes and bedazzled bazookas. Saints Row, from 2006, and its sequel Saints Row 2 were open-world action games about a nameless criminal leading a street gang’s rise to power, a relatively dark tale interspersed with zany moments. Saints Row: The Third solidified the franchise’s now trademark over-the-top aesthetic and Saints Row IV capped off the series by turning the player into a superpowered politician (president of the United States, to be exact) fighting off an alien invasion.

Enter 2022’s Saints Row, a reboot that developer Volition said would take the series back to its roots and focus on a small-time gang becoming a major player in the criminal world — but without losing the cheeky, irreverent niche that Saints Row has carved for itself. I’m happy to report that Saints Row succeeds on that front. The writing is wacky, the humor is silly and the characters have some surprisingly poignant moments in between all the crazy high jinks. I am sad to say, however, that Saints Row is also one of the most badly optimized and buggiest games I’ve played all year. 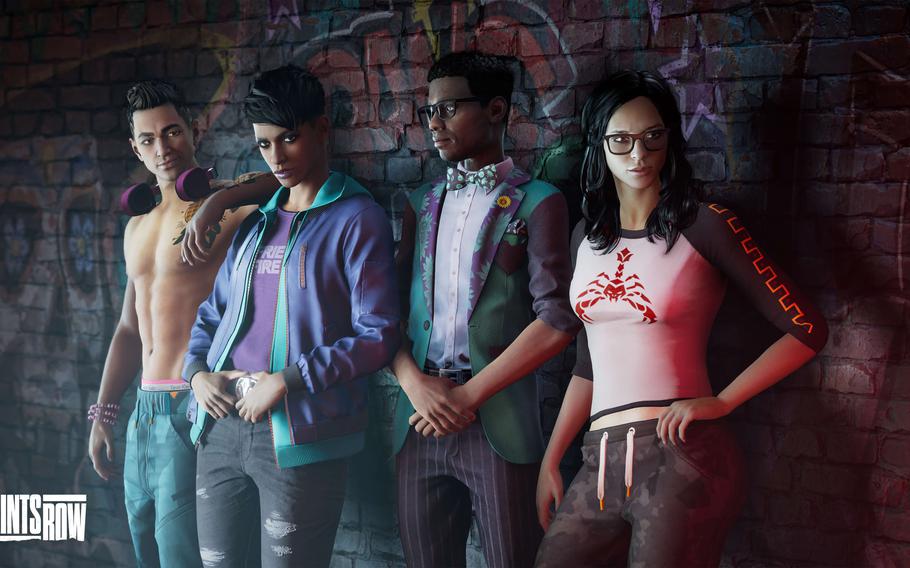 The crew that make up the Saints criminal syndicate: From left to right, fun-loving DJ Kevin, your player the Boss, brainy entrepreneur Eli and artistic mechanic Neenah.  (Volition)

In this latest entry, you play as a penniless 20-something-year-old living with their three friends in Santo Ileso, a new metropolis inspired by the big cities of the Southwest. Your tightknit group of misfits includes the brainy entrepreneur Eli, artistic mechanic Neenah and fun-loving DJ Kevin (a thinly veiled reference to Asian American rave bae meme persona, Kevin Nguyen). Your origin story is quintessentially millennial and Gen Z: After working thanklessly for giant corporations and struggling to find stability in a highly volatile job market, you and your friends decide to do your own thing by starting a new criminal syndicate called the Saints.

To fund your burgeoning illicit enterprise, you commit lots of extravagant, ridiculous crimes. The main story missions in Saints Row range from Hollywood blockbuster style heists to slice-of-life sequences. I have pancaked dozens of cars from angry rival gangs in my monster truck; I also took Kevin on a quest to get a kid’s meal toy and learned that he never got one as a child growing up in foster care. The repeatable side hustle missions include infiltrating guarded rooftops using a wingsuit and riding shotgun for getaway drivers. In the absurdist, cartoony world of Saints Row where assassinations are crowdsourced out to the gig economy via an app called Wanted, racking up a body count in the thousands should be gleeful fun. Unfortunately, most of that fun has been crushed under the game’s litany of bugs.

Oh the bugs, so many bugs. Listing them all would take an entirely separate article. In one mission, my shotgun stopped working completely during a sequence where I was being rushed by half a dozen enemies with melee weapons; reloading my game didn’t fix it. I automatically failed another mission because the last target I needed to kill spawned a quarter mile away from the objective area and leaving to pursue him timed me out. My game crashed during a cutscene after a main story mission, and when I loaded back in, the mission had already concluded. There was no way for me to go back and see what happened. On yet another mission, after fighting my way through a gantlet of enemies to find a car I needed to destroy, the car suddenly became invulnerable. I had to reload and do it all over again, hoping that the bug was a fluke.

But even without the bugs, Saints Row is in dire need of more development time. The PC version of the game (which is the version I played) feels like an afterthought. Mouse settings are completely nonexistent: I had no option to change my sensitivity or turn off acceleration. The photo feature, which you use for side quests and to record fast travel points, would randomly stop working for me. There are several times where I’ve been in the passenger seat and my AI driver would keep grinding into civilian cars until we both died in an explosive inferno. For some bizarre reason, the game won’t let you fast travel during the introductory phase of a main mission. I would start a mission, see that the quest giver wants to meet me all the way on the other side of town, quit the mission, fast travel to get closer and then start the mission again. Even the gunplay, a core part of the experience (you shoot lots and lots of things in this game) feels sluggish, imprecise and janky.

The most frustrating thing about all this is that I genuinely believe there is a great game buried under the bugs. I love the design approach of putting fun first over realism. When you’re driving in Saints Row, you are an unstoppable force — and in Santo Ileso there are few immovable objects. You can blaze through street lamps, trees, mailboxes and pretty much anything short of a building without slowing down at all, even on a motorcycle. There is a large array of different cars and weapons, each with in-depth features and customization options. I find the writing charming and the Saints crew to be endearingly cheesy, filled with characters who also brim with real tenderness and vulnerability.

There is no shortage of enjoyable things to do in Saints Row, but doing them means putting up with a severe lack of polish. As it currently stands, Saints Row is barely playable. It’s good, mindless fun, but I cannot recommend it in good faith. I offer a little prayer that a day one patch can address some of these concerns, and that the studio has a long-term plan to salvage this promising title.