Players explore the Escape Academy campus in either single-player mode or as a co-op adventure. (Coin Crew Games)

Escape rooms are a gimmick. You're not actually being held against your will by some kind of Willy Wonka-esque Bond villain; you're paying to pretend to be locked in a room with your friends, to scratch your head over puzzles and enjoy the scramble and inherent silliness of trying to find a way out. Escape Academy understands this - and embraces it wholeheartedly. It's a fun co-op experience that accurately captures both the frustration and giddy satisfaction of real-life escape rooms, and with a runtime of four or five hours, it manages not to overstay its welcome.

You begin the game in what appears to be a normal (if pretty janky) escape room that's revealed to be a covert front for the Escape Academy, a school where students train to become masters of escape room puzzles. As its newest recruit, you work to earn badges by breaking out of the school's escape rooms, securing your freedom and - more often than not - your continued survival. The faculty is fiercely committed to cultivating its students' skill sets, and burning buildings and ticking time bombs are compelling motivators.

Just like in real escape rooms, you'll comb through the play area looking for clues and using what you find to solve puzzles. Each stage involves a series of interlocking puzzles; maybe you notice some kind of cipher on the wall, but the key to decoding it is behind a locked door, and so on and so forth. Whenever you successfully crack a puzzle, a satisfying synthy jingle plays to indicate you're on the right track.

At the start of one stage, for example, I needed to find the class pet rat (which, yes, you can pet) to charge a generator with its running wheel to turn the power back on. I spotted a snack machine with a single doughnut I could use to coax the little dude out of hiding. But first I had to find the coins to buy it, and of course it isn't a normal snack machine but a snack-doku machine, so the item number that I need to tap in to buy the doughnut is the solution to a sudoku puzzle. That's just the first stage, though. With the power back on, I can finally try to hack into the computers that unlock the next phase of the puzzle.

The gameplay loop gets a little repetitive, but that predictability doesn't stop you from feeling like a genius when you've finally cracked a difficult cipher and all the pieces start to fall into place. The game also throws in a couple of interesting twists by incorporating items you find throughout the level. For instance, after finding a fire extinguisher, it may immediately come to mind to use it on a burning plate in the microwave, but not necessarily on a lit chimney place several puzzles later. You'll have to keep your whole tool kit in mind to make it out quickly and safely.

The bulk of the solutions come from deciphering codes, which felt like a bit of a missed opportunity to incorporate the player's surroundings into the puzzle-solving process, and they only get more dense as the game goes on. At one point after figuring out the key to getting into a locked van, I groaned out loud when I saw a periodic table of elements on the wall, realizing that it was part of the next puzzle. (In that same stage, a Russian-English dictionary later came into play.) Some of the later puzzles work in more physicality and spatial manipulation, particularly the final level, which is reminiscent of "Portal" in how players must use the components of the puzzle itself in unexpected ways to their own advantage. It's something I would have loved to see more of throughout the game rather than just in its final act.

While it has a single-player mode, Escape Academy is best enjoyed as a co-op adventure, either through online multiplayer or good old-fashioned split-screen. The design of each puzzle incentivizes you to collaborate and share your findings. In one instance, my husband and I needed to solve a logic puzzle to fix a breaker box. Clues were posted on signs around the room, so while he walked over and read them aloud, I stayed at the breaker box and used that information to figure out the correct sequence.

My favorite stage of all involved directing a crew on a rescue mission, using hacked video feeds, blueprints and radio communications to instruct them where to go. It required frequently cross-referencing computer screens, navigational charts and other documents - all of which was much easier with two pairs of eyes.

Escape Academy reminded both of us of another co-op game, Keep Talking and Nobody Explodes, in that there was never really a time when we weren't communicating. One of us would find a piece of the puzzle that unlocked a flash of realization in the other - a frantic back-and-forth that felt more exciting than stressful. After each stage is a puzzle review, walking you through the steps and the time it took you to solve each one, which we often used as an opportunity to better explain our reasoning behind the rushed instructions we blabbered out after we got caught up in the high of an epiphany.

Escape Academy uses simple point-and-click controls, making it approachable to a broad audience - though the few mechanics it employs to assist players with puzzle-solving aren't always the most helpful. There's a hint option if you get stuck that recharges after each use, but nine times out of 10 the hint would tell us information we had already figured out, like pointing out the location of a clue while were struggling to decipher its meaning. Certain documents can be pinned to your screen as a helpful reference, which sometimes turned into a hindrance when it obscured the very puzzle it was meant to help you solve. 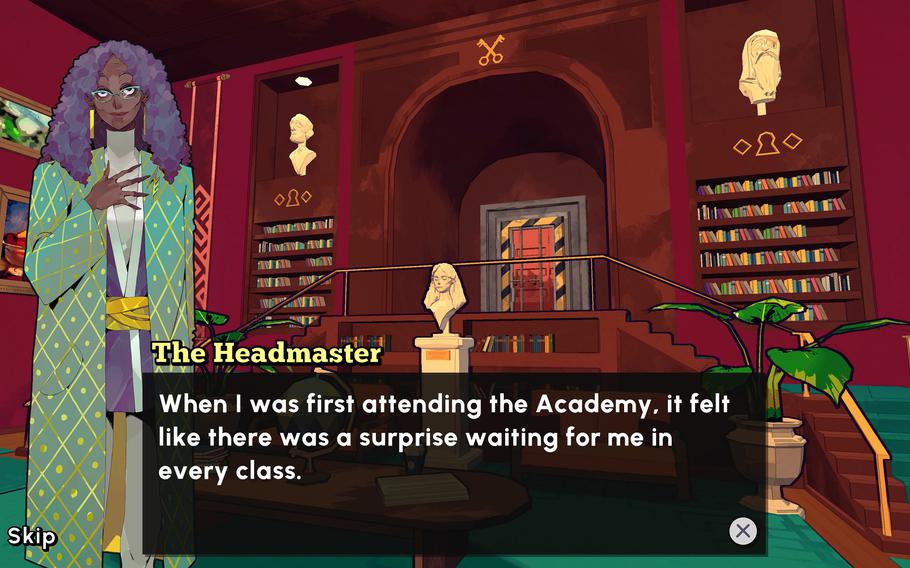 Escape Academy is more than a collection of escape rooms, as we discover an entire universe dedicated to puzzle craftsmanship.(Coin Crew Games/TNS) (Coin Crew Games)

Once you finish the main campaign, there's not much replay value since the puzzles remain unchanged, but what's there is a charming experience. The Escape Academy staff are memorable, and they're rendered in cutscenes in a gorgeously detailed art style in the same vein as the game Hades. Your dorm room fills up with knickknacks to reflect the puzzles you've solved and choices you've made (after getting an achievement for chatting up a lot of people, a book titled "How not to have an awkward conversation" appeared in my dresser drawer). Poking around a level and interacting with objects that aren't part of the puzzle almost always reveals silly descriptions and at least a pun or two.

Puzzle games have to manage a delicate balancing act: If solutions are too simple, players lose interest; too difficult, and they feel cheated, like the answer was never decipherable to begin with. Escape Academy was opaque at times, but the answer always felt like it was within my grasp, if I just tried out this one idea, or thought about the puzzle from this other angle. Giving players that sense of empowerment is hard, and games don't always get it right. But Escape Academy walks that tightrope with finesse, joining the pantheon of frantic-but-fun co-op greats.