Cuphead: The Delicious Last Course is a culinary masterpiece 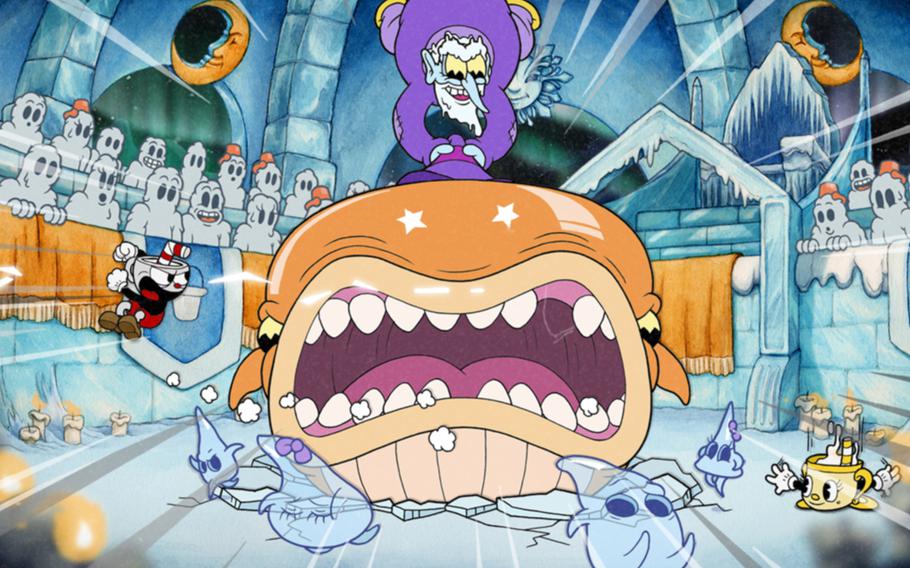 Studio MDHR's debut title, Cuphead, sold millions of copies, won numerous awards, reinvigorated a popular game genre and blossomed into its own Netflix series. It's a tough act to follow.

There are expectations now, more so than there were when the run-and-gun shooter's release shook the gaming world in 2017, and fans have been eager to see if the developer is going to be a one-hit wonder. It's a relief, then, that its long-awaited DLC, Cuphead: The Delicious Last Course, not only builds upon the original but leaves your palate exhilarated and inspires confidence that the Michelin star chef who wowed you the first time didn't just get lucky.

Announced back in 2018 and originally slated for a 2019 release, the DLC's development suffered from numerous delays due to the mental stress on its small development team and, later, complications related to the COVID-19 pandemic. Studio MDHR's display of patience is not only reflected in their development process but in the final product as well.

Upon firing up the DLC, players are met with a familiar jingle before noticing that something is indeed different. Cuphead's opening score has been given a fresh coat of paint as players are introduced to the new and third playable character in the franchise, Ms. Chalice, who is available to play in both the DLC and main story missions.

Returning players can access the DLC content right away as they're introduced to a mysterious new clock-faced character sent by the Legendary Chalice, a spectral ally in the main story, to request the aid of the game's protagonists, Cuphead and Mugman. (New players can unlock the DLC's content by completing the first Mausoleum stage.)

Upon agreeing to be whisked away to lands unknown, a cutscene rolls as you sail off accompanied by a relaxing song and watercolor landscape backdrop on your journey. The moment acts as one of the only calm, peaceful fragments of the $7.99 DLC before players are thrust into the action.

Shortly after reaching land, the Legendary Chalice (known going forward as Ms. Chalice) greets the duo by hopping out of a portal from another dimension (called the astral plane). She reinforces what parents have been telling their children for decades: Don't accept food from strangers. She tricks Mugman into biting a cookie that causes their beings to swap dimensions. Ms. Chalice, now in physical form, urges Cuphead and his now-ghostly right-hand man to follow her to learn more about what brought them there in the first place. 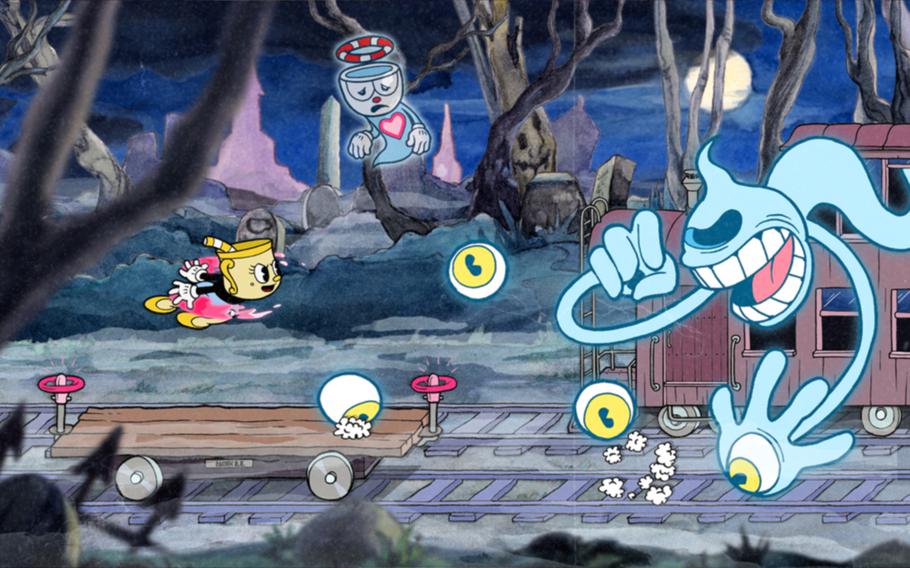 The duo meet Chef Saltbaker, who created the magical cookie with a temporary effect. In order for Ms. Chalice to stay in the physical world, the talents of Mugman -- now back in his real body -- and Cuphead are requested.

By gathering a handful of special ingredients across the island, Chef Saltbaker can create the ultimate treat -- the Wondertart -- that can give Ms. Chalice a permanent body and control of the astral plane. What will players have to do to acquire said ingredients? Defeat punishingly difficult bosses, of course. Five in total.

The story, similar to the original, doesn't have a great deal of depth. There's only so much emotional attachment players can have for characters who speak infrequently in text bubbles when they're not fighting psychotic carrots or dodging a jawbreaker candy trying to eat you. It's not impossible to forge a bond with Cuphead's quest, just much easier to gravitate toward the foes he's up against or the world around him.

Shortly after leaving the bakery, Chef Saltbaker lets you know that you can battle as Ms. Chalice anytime by slotting the Astral Cookie into your Charm slot. Charms are equipable items that manipulate the way you dash, provide extra health or add other combat buffs.

Cosmetic differences aside, Ms. Chalice's kit functionally creates a playing experience worthy of experimenting with for players all too familiar with Cuphead and Mugman's tricks. In fact, it can be argued she's perfect for brand new players or those struggling with a boss. 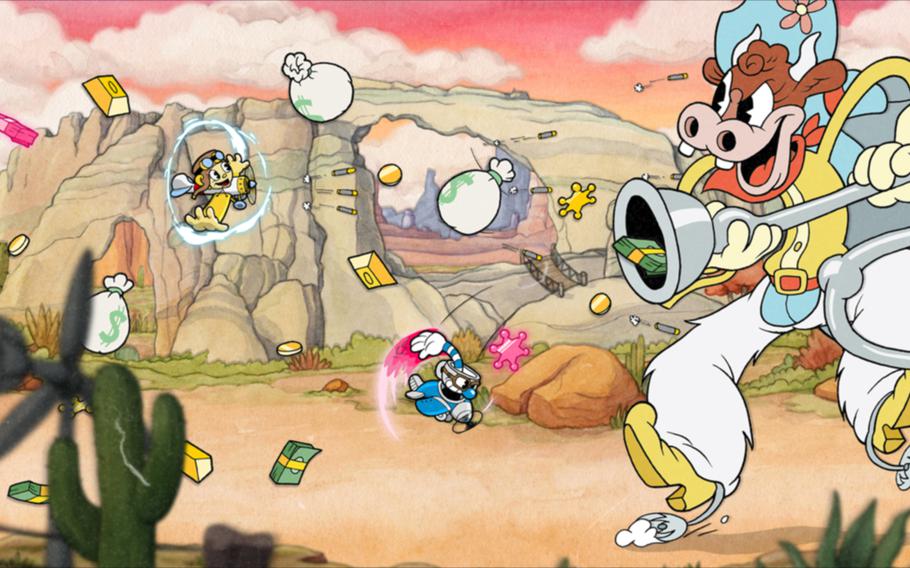 A nifty optional tutorial outside the bakery allows players to gain a level of comfort with Ms. Chalice's Double Jump, Parry Dash and Dodge Roll. While the original two protagonists can only jump a single time and take damage while dashing, Ms. Chalice's Parry Dash renders her invulnerable when hitting a parry-able object, and her Dodge Roll provides invincibility during the duration. She also starts with four health points as opposed to the standard three. In a title with as many close calls as this, one piece of health can be the difference between victory and crushing defeat.

From there, the first important choice can be made: Which boss do you start with? I chose to investigate a suspicious rocky mountain, which is revealed to be a grumpy giant named Glumstone who is upset that you've distributed its rest. After selecting one of the two available difficulties (Simple and Regular), longtime players experience the all-too-familiar feeling that comes with encountering a brand new boss and putting their skills to the test: euphoria.

Wielding an arsenal of flying geese, acrobatic gnomes, an ornery bear, and hand puppets, Glumstone's combat is as remarkably creative as it is beautiful to experience. The hand-drawn animations of each of the constantly moving projectiles, obstacles and backgrounds is awe-inspiring. The physical transformations bosses go through between stages of their combat are seamless, colors bold and vibrant, and the unique musical scores act as a phonic rendition of the madness taking place on screen. A true, true masterpiece.

Studio MDHR's boss fights are brutal as ever, and the developer has found new ways to rack up the death total on players who think they have combat figured out just because they took down King Dice and the Devil in the main story.

Combat is much faster and the battlefields are more dynamic. Players are brought into the action more so than in the original with new camera perspectives. In one particularly tricky aerial skirmish, the camera and world around you rotate at times, causing your brain and fingers to go into a panic.

Immense difficulty aside, you'll find yourself staring at the calm, watercolor backdrops that act in complete polarity to what's in the foreground. I found myself not caring if the "Defeat" screen popped up because I got lost watching the 1930s-style animations whizzing around my character. It will come as no shock that the list of artists and musicians in the end credits of the DLC number in the dozens.

Over the course of the next 10-ish hours, you fight a whale-wielding ice wizard named Mortimer Freeze, a crew of prohibition-era insects called the Moonshine mob and an absurdly difficult bout with a team of battle-worn pooches called the Howling Aces.

What prevents these handful of bosses from feeling like a fresh coat of lipstick on a pig is the way in which Studio MDHR's development team continues to push the boundaries on what hand-drawn animation can look like and how fluid it can be in an age of CGI becoming all the more popular in digital media.

Without going into endgame spoilers, the final encounter goes even darker than a battle with the literal Devil in hell that concludes the main story. What was once a bright and lively backdrop turns gothic as organ music plays in the background and a clever use of shadows creates a truly unnerving environment. The epic score playing throughout rivals that of famous Looney Tune's composer Carl Stalling. You want to get out of the scene as much as the protagonist, and the only way to the ray of sunshine that is the end is to fight with everything you've learned along the way. Once order is restored to the world, players can opt to turn the difficulty up to expert and try it all over again, or piece together a secret puzzle hidden throughout the game that involves a mountain climbing competition and a ghost near a graveyard. There's also a new gantlet in the sky where weapons and Charms are completely disabled in combat and players earn coins.

Studio MDHR's Cuphead: The Delicious Last Course provides players with a five-star meal. As I picked my teeth, let out a final sigh of relief and felt full from my experience, I can only hope that the DLC's name was just a play on words - and that there's still room left for dessert.