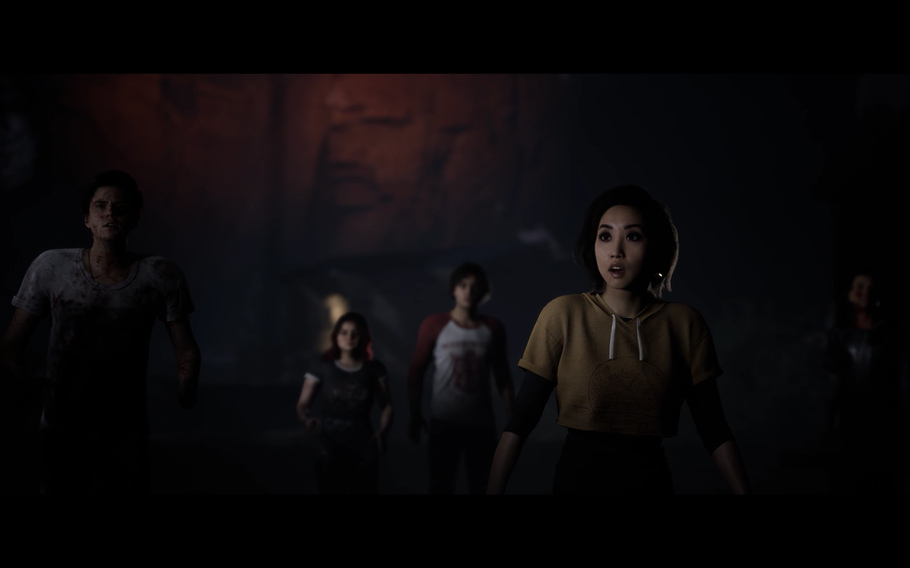 The Quarry is the follow-up to Supermassive Games’ wildly popular Until Dawn. In The Quarry, after Hacket’s Quarry camp closes for the season, a group of camp counselors is forced to stay behind, and every decision the player makes will determine who survives. (Supermassive Games)

I'm a huge fan of horror movies, but when it comes to horror games, I'm a wimp. And yet, I'm such a fan of Supermassive Games' breakout hit Until Dawn. It's an on-rails horror game where your choices determine who survives the night, so it feels more like you've been put in the director's chair to construct your personal cheesy horror movie than being left to face the monsters on your own.

The studio followed it with The Dark Anthology Series, whose entries so far have fallen short of their predecessor. The Quarry, which Supermassive Games bills as the spiritual successor to Until Dawn, is a commendable effort to tap into that same winning formula. It nails the aesthetic and writing of classic slasher films, and its characters are some of the studio's most compelling and memorable yet. But it's not without its problems.

The story unfolds across 10 chapters and hits on all the horror movie tropes you'd expect. Hacket's Quarry Summer Camp has wrapped up for the season, a group of young counselors ends up stuck there for an extra night, warned by their camp leader to stay inside until morning (who is he kidding?) and horny/scary shenanigans ensue. There's skinny dipping, summer flings and boatloads of ill-advised decision-making. As in Supermassive Games' previous titles, players control each of the characters throughout the night, jumping from one to another as they're hunted down by mysterious, bloodthirsty beasts, which are hunted in turn by a family of menacing-looking locals straight out of "The Texas Chainsaw Massacre."

That parallel feels intentional, one of many self-aware horror references throughout the game. There are Evil Dead jokes (a wink to Ted Raimi, who plays a central character) and fourth-wall breaking. "This isn't a ghost story, it's a creature feature and you're all in it," a character says at one point. I half expected her to turn to the camera, like Jim from "The Office."

But while undeniably cheesy, the writing rarely feels heavy-handed or cringey. In true slasher film fashion, the characters flirt and crack jokes even as they're fighting for their lives--it's all very stupid, but the right kind of stupid. Lines like: "It's my beer-dar. Helps me 'dar for beers." Or this running gag about how the creatures chasing them could just be bears, an explanation that becomes increasingly ridiculous as the night's events unfold but that nevertheless keeps getting suggested.

For a story that feels so self-contained, The Quarry has an impressive number of branching paths and different endings. In Until Dawn, your only goal was to get everyone out alive. Not anymore. In my first playthrough, everyone lived to see another day (yay!) but also got arrested (boo!). Along with surviving the night, you also need to assemble enough evidence to clear the counselors' names and learn the truth about all the craziness happening. It's a framing that provides more impetus to explore and replay than previous games in the series, while still fitting convincingly into the narrative. The game has plenty of scares as well, of course, and it's very effective at building tension before terrifying sequences. The camera, alongside the creepy music, does a lot of the heavy lifting here. The Quarry alternates the standard third-person, shoulder-height camera controlled by the player and preset angles that enhance the scares. As I walk through the woods, a camera at ground level creeps slowly closer behind me, as if something's following me. Or the camera might briefly switch to a perspective that's further away, in between the trees, watching from afar. Wait, is that growling I hear? Then, just as quickly, it's back over your shoulder as if nothing happened.

Frustratingly, though, The Quarry makes a habit out of shooting the momentum it so carefully builds right in the face. It'll jump from action-packed sequences of fighting and quick-time events and mashing buttons to quiet segments where you wander around and search for clues. The pacing would pick up and just as quickly screech to a halt with the next scene, transitioning in one case from a bloody shootout to searching a junkyard for a car part. At another point, within the span of a few minutes, a character gets stabbed and then rifles through documents in an empty room with the knife still lodged between his ribs.

Cutscenes are more interactive this time around, with the addition of aiming segments that weave in the same kind of high-stakes, quick decision-making for which the series is known. Armed only with a shotgun, you have to not only hit the target but gauge when it's best to pull the trigger, given the gun's spread. You also have three extra lives this time around - another new feature - to save characters if you make a decision that ends badly. A warning, though: Using one can rewind your progress a fair bit.

There are also additional gameplay options: streamer mode, which ditches The Quarry's soundtrack of licensed music; movie mode, where players can sit back and watch predetermined outcomes; and couch co-op, where players pass the controller back and forth similar to previous games.

It's not often I have a lot to say about a game's menu options, but I have to give credit where credit is due: The Quarry's UI is an impeccably tailored and delightful nostalgia trip. The vibes are immaculate. Slasher films saw their heyday in the late '70s and '80s, and Supermassive Games fully commits to that aesthetic. The starting screen menu mimics a chunky desktop from the early days of computer graphics. Each of the branching paths shaped by the player's choices - the equivalent of the Butterfly Effect mechanic in Until Dawn - is represented by a VHS tape with a unique cover in the style of vintage horror movie posters. Several have stickers slapped on top: price tags and reminders to "Be kind and rewind!" When navigating the menu, you hear the same whirs, clicks and mechanical sounds as you would watching a tape on a VCR. The tutorials are animated shorts reminiscent of after-school specials.

Supermassive Games does its best work when it embraces these kinds of callbacks, committing to the camp and cheesiness of the slasher films that inspired its games. Despite its stumbles, The Quarry is a testament to that, and while it doesn't quite stack up to the original, it's a compelling tribute that I'll be playing again and again.