MLB The Show 22: a familiar pastime 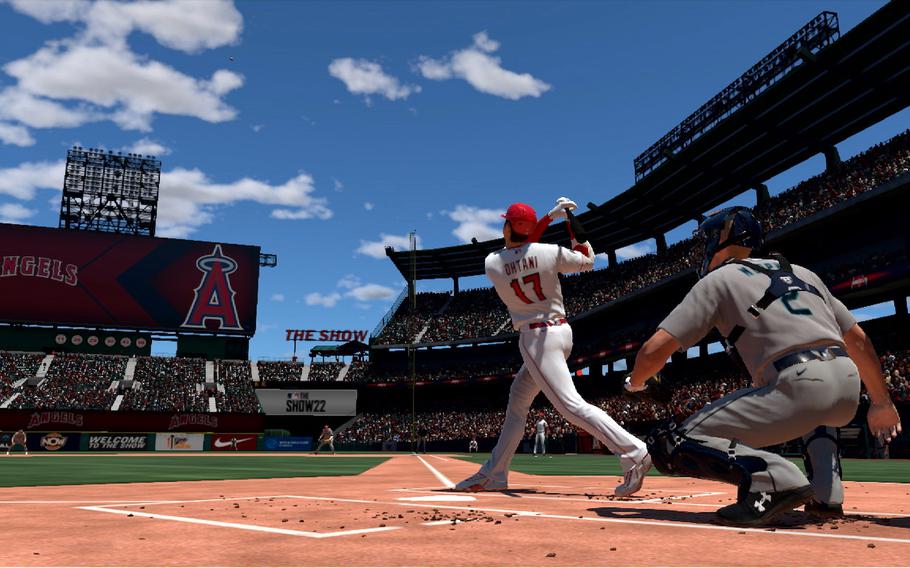 The major features of MLB The Show 22 are nearly identical to the game’s previous iterations. (Nintendo)

I swear a year has passed since MLB The Show 21 released, and yet looking at MLB The Show 22, I wouldn’t know it. The year has changed on the baseball sim’s cover, and Shohei Ohtani has replaced Fernando Tatis Jr. on the box art. And yet.

The Show remains the best baseball simulation out there, and is now, with MLB The Show 22, is available for all three major consoles — PlayStation, Xbox and the Nintendo Switch. It is, hands down, the essential game every baseball fan should own if they want to celebrate “America’s pastime” in video game format. If you’re a baseball fan and have not experienced The Show or have not purchased an installment of the annualized franchise in, say, the past three years, there are ample reasons to procure the new game. If, however, you already know, love and celebrate this game as an owner of The Show 20 or 21, I can find no good reason you should feel compelled to purchase this year’s entry.

This is not an indictment of The Show makers San Diego Studios. You can’t fault them for following a model that has proven lucrative. Still, it’s somewhat stunning that as major video game franchises like Halo and Call of Duty have jumped on the live service bandwagon, sports games — titles that are literally based upon new seasonal content — have not followed suit. Games like The Show 22 — or Madden 22, or FIFA 22, or Insert Sports Game Franchise Here 22 — simply cannot deliver enough value to warrant a $60 spend if you own the previous year’s edition. But would I pay $60 once for the game, then spend annually on roster updates and cosmetics like vintage or thematic uniforms or customized cleats? Absolutely.

Without such a shift in the sports game model, we’re left with the familiar: A “new” game in which the major features are virtually identical, with good but ultimately incremental changes that are marketed as highlights of the new game when most would be a better fit for the bottom of a patch notes list.

There are ample such updates between The Show 21 to The Show 22. San Diego Studios has added fielding to the game’s custom practice mode. The plate coverage indicator (PCI) now shrinks when batters try to hit pitches thrown outside the strike zone to more realistically correspond to the real-life difficulty of hitting such pitches. Similarly, pitch types meant to be thrown in specific areas (such as sinkers or split finger fastballs, which are most effectively thrown at the bottom of the strike zone) have less accuracy when they’re targeted in unrealistic spots. “PCI Anchors” now allow hitters to pin their focus (read: hitting cursor) if a pitcher seems to be emphasizing a particular part of the strike zone. There are new animations for fielding, and perfect throws from the outfield put the player receiving such throws in better position to make a tag. All of those changes are smart and good and things I would never have noticed in a million years if they hadn’t been detailed in an hour-long stream highlighting the new elements introduced in The Show 22’s gameplay.

In truth, there are two main reasons to buy The Show 22. The first is for Switch owners who can now play the franchise for the first time ever. As noted up top, if you’ve never been able to play this game before because it had been a PlayStation exclusive until last season, when it came to Xbox, it’s a must-own for baseball fans. That said, the Switch version, while serviceable, has a noticeably worse frame rate, especially in cutscenes, and mobile-tier graphics — especially from the batter’s perspective, looking out at the stadium backdrops. The Switch version doesn’t appear to include the Stadium Creator feature, which is probably for the best, given the graphics.

The second distinguishing feature of The Show 22 is the introduction of co-op play, which allows up to three players to team up. In theory, it seems like a fun new feature, one present in games like FIFA or Madden. But instead of playing the game together, you’re really just dividing up your playing time.

While baseball is a team sport, the game’s actions are individualized. At the plate in co-op mode, players alternate controlling the batter, meaning that — unless there’s a runner on base — the other player is twiddling their thumbs. In the field, it’s the same. Only the pitcher is really making an impact until the ball is hit. Then it’s on to the fielder. (Oddly the player controlling the pitcher also controls the catcher, while the other player controls the other fielders, which can take some getting used to as runners are scurrying around the bases.)

There’s really no advantage to co-op teamwork, unlike in FIFA or NBA 2K when teammates can make timely cuts to receive passes or deny players the ball on defense. In The Show’s co-op mode, you’re not adding another player to the game, you’re cutting your own game in half. Add in the fact you can only play co-op against other live players and it’s hard to see many instances when I’d opt for this mode over just playing my friends head-to-head.

Unless the co-op mode scratches a very specific itch for players, or you’re a Switch owner, there are few substantive reasons to purchase the new game if you already have The Show 21. The next-generation features are the same as last season, with the return of the stadium creator and perfect contact at the plate producing a super-satisfying crack and vibration through the PS5’s DualSense controller. The Road to the Show, which places custom-built players on the path the big leagues, is a near rerun of past seasons with its usual scenes in which “the manager talks to the player” about his alarming volume of strikeouts (which are really not that alarming given their rise in the real-world MLB).

All of that rerun content is fine. It’s why people bought and loved The Show before. It’s why they’re still playing and enjoying it. But it’s also a poor reason to drop money on the new edition.

And there are some frustrating elements that have carried over from year to year that remain in The Show 22. It’s still very hard to hit consistently, given the lack of two real-world aspects (no depth perception from a TV screen and no visible seams/spin) that help identify certain pitches. Fighting off change-ups is every bit as challenging as facing even the most unfair of attackers in Elden Ring. But for the most part, the biggest problems The Show features can be attributed to the wonderful and totally unfair game of baseball. So while the above feels unfair for a video game, it’s ultimately fair within the context of the sport it’s simulating.

It’s certainly frustrating when, after a homestand of flailing at breaking balls, you finally connect for perfect contact only to line out to the short stop. It’s likewise aggravating when you place a slider on the corner of the plate only to see it called a ball. That’s baseball though. That happens. And while it seems like your player is struggling when he’s batting just .245, that’s really about average for a modern major leaguer. If you want to mash every at-bat like someone who signs their name with “H.O.F.” at the end, you’re probably going to want to drop from the game’s simulation setting to casual. The developers added two new lower-level difficulty settings (Amateur and Minors) to help address new or lower-skill players as well.

There are other nits to pick. The user interface can be a pain to navigate in the menus and certain information (like the current pitcher’s fatigue level) is absent from screens where it would be most helpful (when making bullpen decisions). It’s still a bit too easy for a fielder to make a bad throw even when the throwing meter ends up in the green.

For the most part, though, newcomers will find plenty to embrace about the series and players of past iterations of MLB The Show will find a whole lot of what they know and love. The biggest problem, in fact, is they’ll likely find a little too much of it.