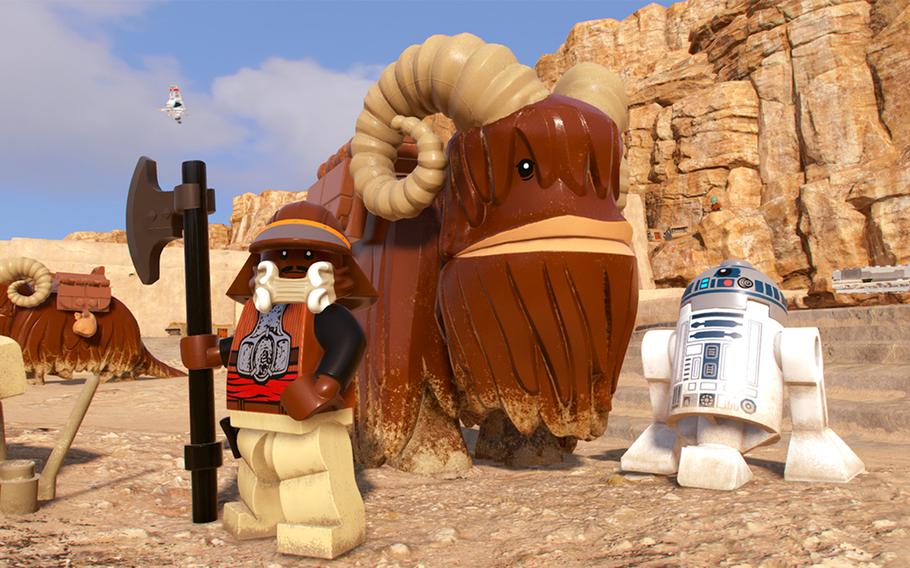 When you start playing LEGO Star Wars: The Skywalker Saga, you get the chance to play through the series at the beginning of any of the three-episode arcs, with “The Phantom Menace,” “A New Hope” or “The Force Awakens.”  (TT Games)

When you play LEGO Star Wars: The Skywalker Saga, you can see the vast blueprint TT Games drafted for its creation. The studio has reimagined the Lego game's combat system, not just by changing the player's point of view but by introducing an entire leveling system for different classes of characters. You're able to explore every world from the Star Wars universe, but in that expansiveness, sometimes searching for largely meaningless in-game items and completing fetch quests, the greatest revelation is a question: Was this ambitious vision for The Skywalker Saga worth its cost?

To be clear, the game is entertaining, leaning into its witty trademark humor and delivering the sort of nostalgia that will compel you to impulsively relive your childhood (as I did when I purchased a 474-piece X-Wing Lego set last night). The game, which released April 5, is also the best iteration of the Lego franchise. But the box set of all nine episodes is filled with numerous pieces that I skipped over entirely — and that's not just because I rushed to write this review. Parts of The Skywalker Saga feel unnecessary, which is frustrating because the people who made the game say they crunched six days a week to get it out the door. The game stretches a bit thin across the many galaxies it's attempting to re-create. Whether you're walking through the streets of Coruscant or Naboo, the scenes are just places for you to find more studs (the in-game currency) or Kyber bricks (which help you level up along with studs). I don't believe every page of the studio's plan needed to exist — especially, again, when you consider the amount of overtime reportedly required to piece this massive Lego set together.

The Skywalker Saga tells the combined story of all nine Star Wars episodes, stretching from the blockade of Naboo to the rise of the Final Order on Exegol. When you start the game, you get the chance to play through the series at the beginning of any of the three-episode arcs, with "The Phantom Menace," "A New Hope" or "The Force Awakens." And like all the Lego games from TT Games, The Skywalker Saga is an abbreviated version of the movies, briskly moving you through the key moments from every episode in multiple missions that require you to fight enemies, build tools and solve puzzles to advance. 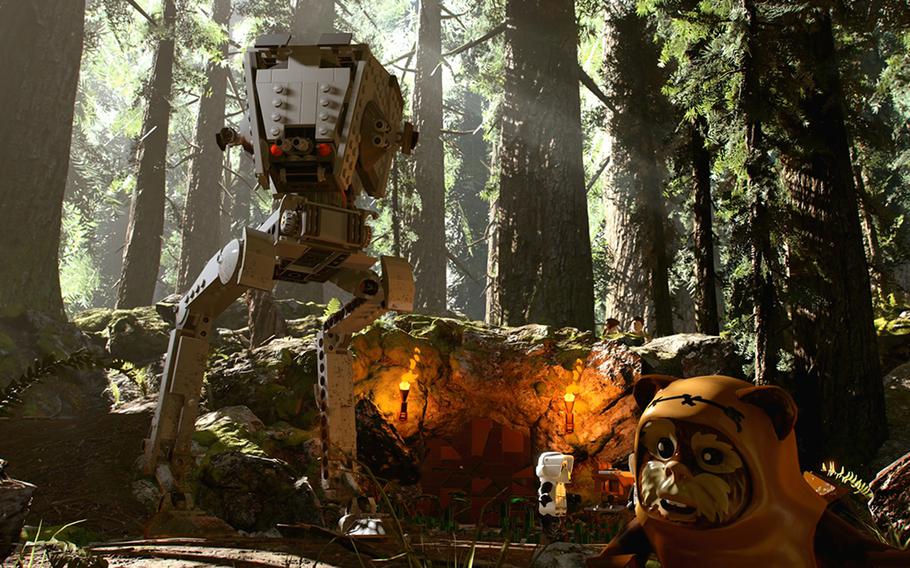 The crowning achievement of The Skywalker Saga is that it never takes the franchise too seriously. TT Games managed to turn even the most questionable plotlines from "The Rise of Skywalker" into palatable moments. There are plenty of times where the game had me chuckling to myself on the couch. Anakin Skywalker is always complaining about sand — even long after his death. And Luke Skywalker is always searching for that strange blue milk he drinks on his hermit island.

In one of the most notable changes from the studio's standard Lego format, The Skywalker Saga does away with the wide, third-person camera angle from past games. Instead, you play through a tighter, over-the-shoulder perspective. It works perfectly, and it's the best piece TT Games has added to the Lego franchise. The closer camera angle focuses on your character's point of view, which makes simple tasks like aiming a blaster a lot less complicated. 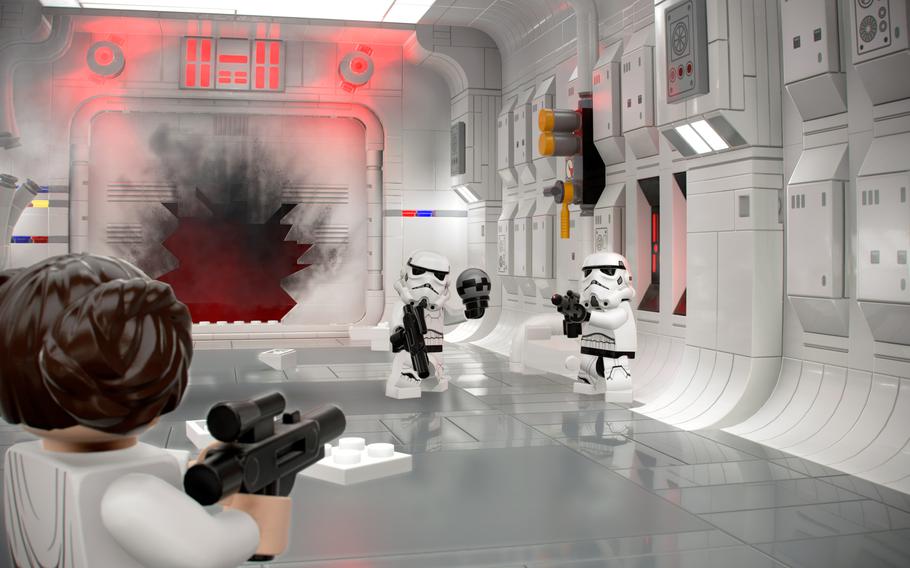 The best thing about the Skywalker Saga gameplay is that the game does away with the wide, third-person camera angle from past games. Instead, you play through a tighter, over-the-shoulder perspective.  (TT Games)

Speaking of blasters, there are a number of new bells and whistles added to the combat as well. You can dash behind cover, parry incoming attacks and string together a flashy set of moves with a simple combo of your own. It's all a very basic version of the combat system first perfected in Batman: Arkham Asylum from Rocksteady Studios. You can every parry close-range attacks; I just often had to intentionally wait for enemies to attack before I could counter them. The game — which, admittedly, is developed with first-time gamers in mind — never actually requires that you master these mechanics. I only ever mixed up my combination of attacks because, eventually, pressing the same button gets boring.

As you progress through the game's nine episodes, you slowly collect Kyber bricks (Lego's version of the crystals that power lightsabers). And the bricks allow you to develop the unique skills for the different classes of characters in the game — the Jedi, the protocol droids, the bounty hunters, etc. I largely ignored all of this while playing. A few of the basic upgrades are nice to have (to build Lego sets faster or carry along a bit more health) but the entire skill tree system largely felt like a waste of time. I spent the studs I collected on unlocking characters — like a shirtless Kylo Ren — not maxing out my dark lord skill tree.

Every major location in Star War has a playable open world that you can explore along your journey, from the iconic Mos Eisley spaceport to the capital planet Coruscant. But I was surprised to see some locales that are basically footnotes in the cinematic series received the same open-world treatment. The small outpost Poe Dameron visits with BB-8 on Jakku at the beginning of "The Force Awakens" and Maz's castle on Takonda are both — spoiler alert — blown to pieces by the First Order almost as soon as the audience is introduced to them. You spend so little time in either location during the movie, I didn't really feel the urge to explore the blocky burning ruins in "The Skywalker Saga" — especially because the only reason to do so is to find every collectible the game has buried there. 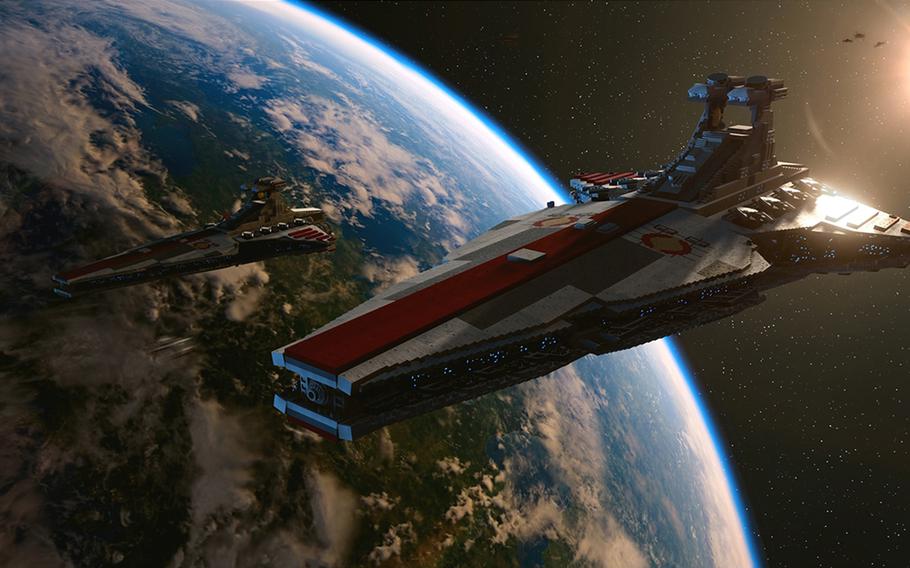 LEGO Star Wars: The Skywalker Saga seems to hide collectibles in every nook and cranny across the galaxy. (TT Games)

Those venues and missions provided a stark answer to the question of "What's worth your time?" from both a player and developer perspective. Notably, the answer is not found amid the rubble of Maz's restaurant.

TT Games intended for The Skywalker Saga to be the company's most ambitious Lego game yet. It took the studio almost five years to develop the game after repeated delays. And, according to a Polygon report published in January, current and former employees say management's grand ambitions fostered a toxic work environment where some staffers worked 80 to 100 hours a week to make this game a reality. That didn't need to happen. The Skywalker Saga didn't need to hide collectibles in every nook and cranny across the galaxy.

The Star Wars fandom has already realized that more does not always mean better. The Skywalker Saga has a lot of heart, but I could have done without the superfluous leveling system or paper-thin open worlds. Part of me will always enjoy watching Qui-Gon Jinn slice up droids on the streets of Naboo. The Skywalker Saga is a beautiful nod to that nostalgia. Beyond that, I'm still stuck on a final question. You have to wonder whether, for those managing the game, the end product equates to time well spent during development.