One of the diverse environments in Kirby and the Forgotten Land is a theme park. Each area is unique and has its own distinct visual style. (Nintendo)

When the first trailer for Kirby and the Forgotten Land dropped, it looked as if the pink puffball might be getting the Breath of the Wild-style makeover the Pokémon series enjoyed with Pokémon Legends: Arceus earlier this year. However, as it quickly became clear while playing, this is no open-world Kirby game. Kirby and the Forgotten Land undeniably pushes the series to a new scale, but at its core, it's more of the same. That's not a complaint, though. If anything, it shows that the Kirby team knows its audience, as the franchise's predictable formula is part of its appeal.

The two biggest shake-ups this time around are the addition of another dimension, with 3D levels replacing the franchise's usual side-scrolling, as well as the already heavily memed "mouthful mode," a mechanic where Kirby partially consumes inanimate objects to take on their attributes. Sucking up a lightbulb allows Kirby to navigate dark rooms, stretching over a car lets him zoom around at high speeds and inhaling a vending machine grants him the power to fire soda cans from his mouth to tear down barriers and enemies, for example. This ability is tied to a handful of sparkling objects you come across in each level, and adds another level of complexity to the game's platforming and puzzles. Kirby gains this new ability after being sucked into a strange vortex to a new world, one that looks eerily like a dilapidated and empty version of our own. There he finds a ferocious group of animals called the Beast Pack that is kidnapping Waddle Dees, other inhabitants from Kirby's home planet, and it's up to you to free them by completing a series of levels that take you across this strange new environment. In a first for the series, there's an overworld map to explore and a hub world, Waddle Dee Town. The town grows as players free more Waddle Dees, and that's where you can power up Kirby's copy abilities, purchase items and play minigames to earn coins, among other things.

The main gameplay loop involves completing levels using a combination of Kirby's copy abilities and mouthful mode to platform, solve puzzles and defeat enemies. While the path through each level is linear, there are lots of clever secrets and hidden areas tucked away for players to uncover hidden Waddle Dees. Completing objectives, such as eating a certain number of ice cream cones or leading lost ducklings waddling back to their mother, also unlock hidden Waddle Dees, though these objectives aren't revealed until after you've beaten the level at least once, encouraging multiple playthroughs. Free enough Waddle Dees in a given area to unlock a boss battle where Kirby goes one-on-one with a member of the Beast Pack. Kirby’s mission is to rescue Waddle Dees that have been kidnapped from Kirby’s home planet. (Nintendo)

Kirby's adventures take him through a series of diverse biomes and haunting urban ruins, each stunning environment ingeniously and seamlessly incorporated into the level design. Each area feels unique and has a distinct visual style: an abandoned waterworks factory, a Beverly Hills-esque neighborhood, a frozen cityscape with similar landmarks to London, etc. In a theme park level, for instance, I dodge rides that have gone haywire, assume control of a roller coaster car, zoom around a go-cart course as car Kirby (carby?) and cackle when enemies politely waiting in queues only attack me after I cut them in line.

One of my favorite levels was a science fiction-themed haunted house. I dodged cardboard cutouts of aliens along with the actual ghosts that now resided in the attraction, all to a synthy soundtrack that nailed the tone set by the neon color palette and ‘90s-inspired patterns.

As great as the environments looked, a few jarring disparities are hard to ignore. Kirby can fly short distances by filling himself with air, but in a side-scrolling game, his vertical movement is limited by the edges of the screen. A 3D setting like that in Kirby and the Forgotten Land doesn't have these same clear visual constraints. Instead, it relies on seemingly arbitrary height limits to keep Kirby within the playable area - but constantly bumping into an invisible ceiling gets old fast. Additionally, Kirby and the colorful, cartoonish enemies he fights look laughably out of place among the derelict city streets and factories, as if they've been copy and pasted from another game. Even if I could ignore it for a while, it repeatedly struck me how bizarre a pink puffball looked running around a grim vision of humanity's future, particularly in the later levels. This uncanniness extended to the character designs as well. For example, animals with incredibly detailed and realistic-looking fur have giant anime eyes, like someone's plastered stickers on a stuffed animal. 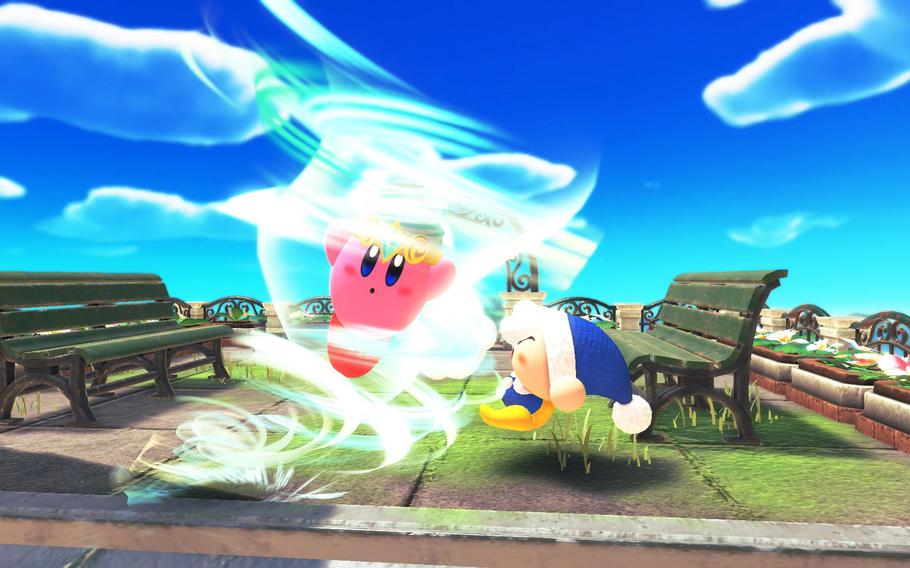 Kirby takes advantage of special powers throughout the game, in this case becoming a tornado. (Nintendo)

While not nearly as unsettling, the visuals also suffer from technical issues. I ran into frame rate drops throughout the game; at first they were limited to the background, particularly as I approached far-off enemies, but the stuttering got worse over time as the levels grew more complicated and involved more moving parts.

Beating levels unlocks timed challenges on the overworld map, each centered around one of Kirby's copy abilities or new mouthful mode powers, where you earn stars to upgrade different copy abilities back in Waddle Dee Town. These challenges vary in difficulty and serve as practice to try to master Kirby's powers as they're upgraded throughout the game. (Like the ranger copy ability that gives Kirby a gun. And, when upgraded, two guns!) 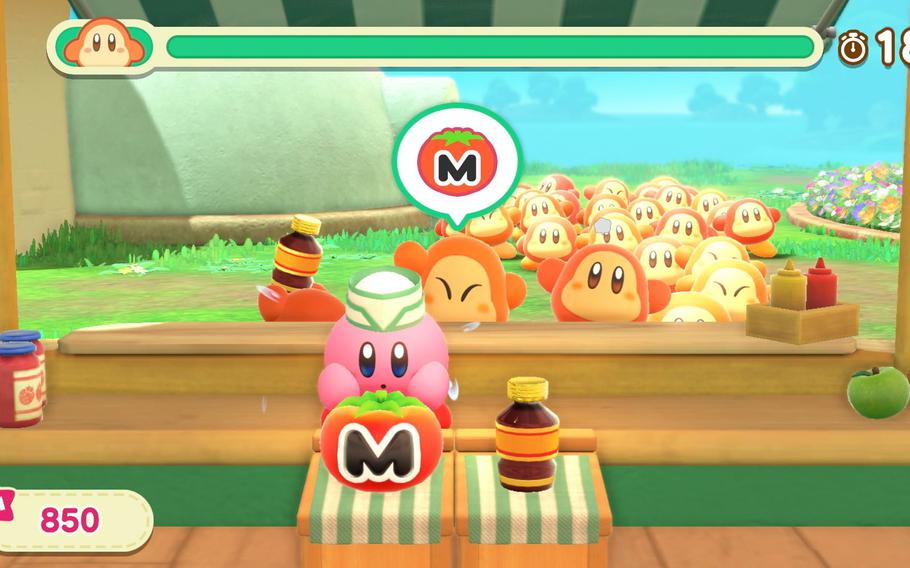 These challenges also serve to teach players new techniques specific to each ability that can be used in battle or to solve puzzles and find hidden Waddle Dees. Some of these levels are more intuitive than others, and a few inexplicably have fixed camera angles that prove frustrating. For the most part, though, they represent welcome challenges that push Kirby's abilities beyond what players encounter in the main story.

The game's final levels force you to use the entire arsenal of powers and techniques you've unlocked, and all of it comes together in some really fun and interesting ways that rely on more precision-based platforming. Kirby games aren't exactly known for their difficulty, though, a fact that was clear even playing on the harder of Kirby and the Forgotten Land's two difficulty settings.

Beyond gameplay, though, the charm of Kirby games comes from the many small, impeccably designed and adorable details woven throughout that create its lighthearted and cozy vibes. When Kirby enters mouthful mode, whatever form he takes retains some of the same design elements as his current copied ability, just at a comically smaller scale (picture a vending machine wobbling around wearing a tiny Link hat, or a bright blue and pink bike helmet). One copy ability just makes Kirby take a nap on the floor wherever he's standing. The upgraded version has him pull a bed out of thin air before falling asleep. Of Kirby's emotes, there's a button to say "hi," and if you press it near other characters, they'll emphatically wave back. None of these offer any gameplay value, but details like these are what make Kirby Kirby.

The predictable formula of Kirby games accounts for part of their appeal. Think of it as comfort food. Case in point: My first Kirby game was 2000's Kirby and the Crystal Shards for the Nintendo 64. Now, 22 years later, I'm fighting the same enemies with many of the same abilities I did back then. Kirby and the Forgotten Land throws in some new elements to keep things fresh, and it executes them well for the most part. But it still feels like coming back to a familiar place and feeling like you never left, which is exactly what I, like many others, find endearing about the series.