Gran Turismo 7: A lot of car culture, a little racing 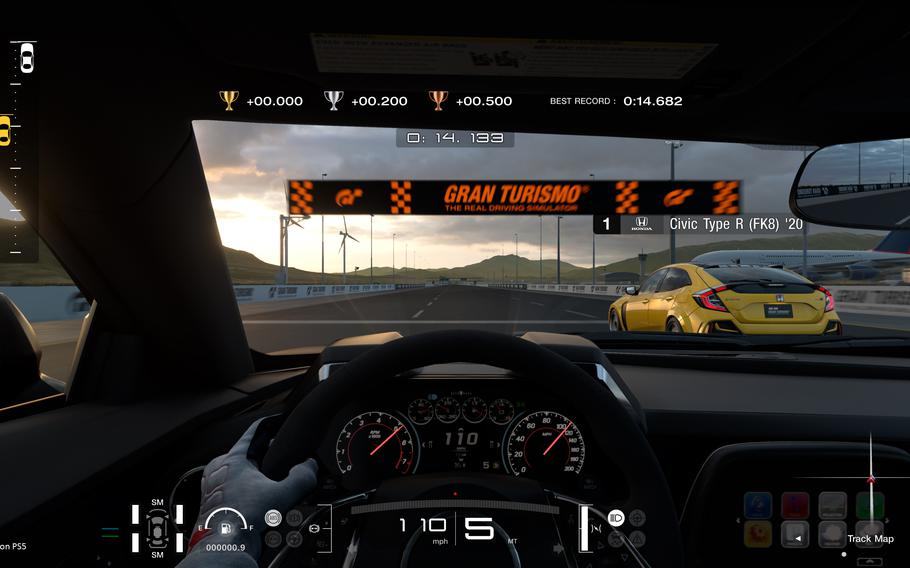 In the first 10 hours or so of Gran Turismo 7, the location I feel I've spent the most time in is not a track, nor a garage, but rather an in-game coffee shop. And while the in-game music ranges from jazz to metal, the tunes I most closely associate with the game are the tinkling piano keys that play over cutscenes of babbling brooks and pastoral European vistas.

In many ways, when I play Gran Turismo 7 it feels like I'm approaching the first tee at Augusta National Golf Club, half expecting to hear the voice of CBS broadcaster Jim Nantz welcoming me to this year's Masters. "Hello, friends." Settle in and get comfortable.

That's not the sort of feeling I associate with a racing game, where the need for speed and thirst for victory typically pump players with adrenaline like gasoline. By comparison to titles like F1 or even the more arcade-like Forza, Gran Turismo 7 feels like a Sunday drive - windows down, radio on, weaving through winding-but-manageable back roads about 15 miles per hour over the posted limit, enough to earn a speeding ticket but not to put yourself in danger. It's a little edgy, but your palms remain dry and your blood pressure remains low.

Given the plethora of customization options and a catalogue of 400-plus cars, including high-end makes and models that can reach speeds over 200 mph, I'm sure the heart-in-your-throat thrills lay around a bend ahead. But the game's early experience has been very much a breezy drive in fifth-gear. It's a slow build, which is wonderful for entry-level racing game players like myself, but could frustrate a more seasoned racer who wants to dive right in and indulge their inner Ricky Bobby.

Gran Turismo 7 feels like the racing game for car enthusiasts. The people who will most enjoy it are those who keep the latest copy of Car and Driver under their bed pillows, with pinups of Porsches and Aston Martins lining their room. Twenty-five years after the series first hit the market, this is a game that celebrates the car-making industry as much as racing. First you learn about the cars. Then you see what they can do on the track.

At the aforementioned coffee shop, players spend time chatting to a lovely bearded man named Luca, who feels like the sort of quasi-dashing man of intrigue who hangs about such venues chatting up middle-aged divorcées. From behind his salt-and-pepper beard, Luca will tell you helpful information and give you "menus," which are basically a series of challenges you complete to attain new cars and unlock new areas of the world map. After unlocking new cars, Luca will educate you about their history. Did you know that "European hot hatches" are a family of hatchback, compact cars modified for improved performance? Or that FRs are a class of rear-wheel drive cars with the engine positioned in the front? I imagine him slowly caressing the exterior of a BMW as I read his words, his eyes lustily gazing into its just-buffed exterior. Luca, you rascal, behave!

The chit chat is pleasant if one-sided, since the dialogue in the game consists solely of characters - represented by headshots and closed captions - talking at you. And in between these chats, you do actually drive cars around race tracks in Gran Turismo 7. The racing feels great.

Perhaps the most welcome feature is Gran Turismo 7’s use of the DualSense controller, which allows you to steer your car by holding the controller in front of you and turning it left or right like you would a steering wheel. The right trigger accelerates the car, the left trigger brakes and both will push back with various levels of resistance based on what your car is doing. Accelerating rapidly? Expect more resistance on the right trigger. Need to stand on the brakes? Expect the left trigger to push back against your finger.

The haptics enhance the experience. When you're driving in real life, there is truly a "feel of the road," where the friction and vibrations from the car's tires resonate up through the steering column and into your hands on the wheel. It literally puts you in touch with the road, and here it is replicated better than ever before.

In Gran Turismo 7, the controller pulses as you switch gears and squeals as you brake. There seemed to be more subtle cues beyond those, but honestly, I didn't feel attuned enough with the game or controller to distinguish them. Perhaps a truly seasoned racing sim player would be able to discern if they're useful or muddy, but they're there.

The entry-level experience also boasts a mode where the game will aid drivers by automatically braking and accelerating, particularly around turns. It makes the racing extremely easy, even against the standard difficulty setting for opposing drivers. I also feel like it could hinder players later in the game, as stiffer competition and faster cars will require players to master accelerating and decelerating around turns and more closely follow the proper paths to maintain high speeds. While the auto-assist will help keep you in control and on course, it also limits how fast you can go.

That said, players should have plenty of time to adjust, because the game's progression is extremely deliberate. Players will need to get comfortable with a lot of other, non-racing tasks to push through the early stages of the game. (Did I really need to "wash" my car at the GT Auto shop? Or noodle with the game's photo mode?) For better or worse, patience is required as you unlock new areas and earn access to new race tracks and competitions.

The world map consists of 14 venues that allow you to perform various functions, such as finding a race, tuning your car, purchasing new vehicles, training or finding a multiplayer race. Each is unlocked gradually, usually preceded by a "menu" from Luca. Some races, like the Tokyo Highway Parade Championship, require you to pass certain training exercises to earn a "license." Multiplayer races aren't unlocked until you complete your 10th challenge "menu." That's followed by Sport Mode, which is the game's ranked multiplayer mode. (We did not try either mode ahead of this article, owing to a lack of viable servers.)

But the early journey of unlocking facets of the game is made tolerable, even pleasurable, by the massive collection of automobiles. There are scores of sports cars familiar to those who grew up during the 1990s (and before) pining after a dream car they'd never be able to afford. It's similarly enjoyable to drive a virtual version of more attainable vehicles like souped-up European or Japanese compacts. After earning enough credits, it was fun to head to the in-game dealer and buy a 2014 version of the 2011 Volkswagen GTI I drive in real life (much more responsibly, with two car seats in the back).

Because I'm not frothing at the mouth, pining to unlock the top-tier cars and races or perfect my cornering, I've very much enjoyed my time with Gran Turismo 7. If you simply want to hop behind the wheel and peel out into the sunset, you likely will find the early game a tad frustrating. If you geek out on car culture as much as racing, and if you take pleasure in talking cars like our guy Luca in the coffee shop, it's likely you will find similar pleasure with this game.