Horizon Forbidden West is a sprawling and satisfying sequel 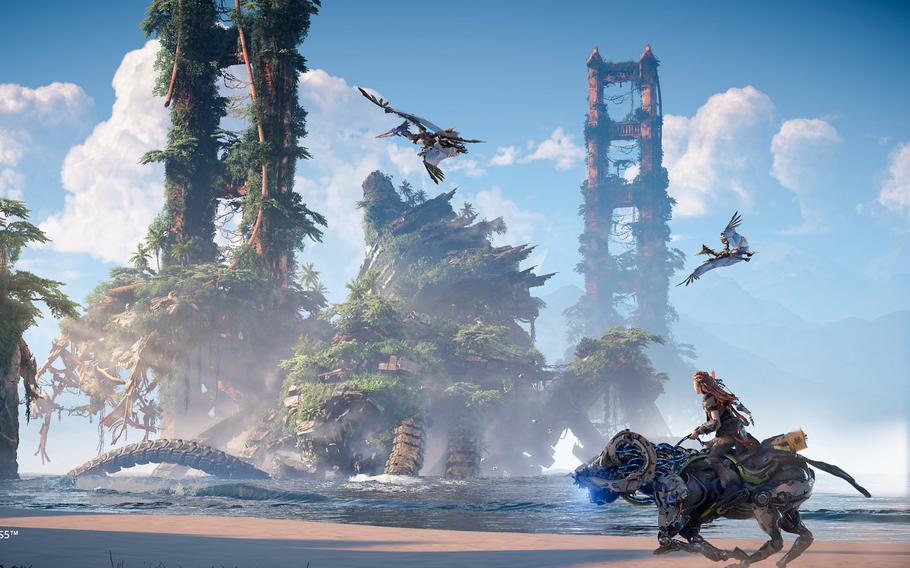 Whenever a highly anticipated sequel comes out, there's the inevitable question of how it stacks up to the original. Horizon Zero Dawn, Guerrilla Games' award-winning, 2017 open-world RPG, set a high bar with its compelling story and gorgeous environments. I can definitively say after rolling credits on Forbidden West that it not only meets that bar, it parkours over it and soars off on a robo-bird into the sunset.

Forbidden West hits the ground running. Within the first hour, you're introduced to one of the many new tools in Aloy's arsenal: the "Pullcaster," a grappling hook that puts a new dimension at your disposal for free climbing - and the first sign that Forbidden West is aiming for an entirely different scale than its predecessor. From a physical standpoint, it expands vertically in both directions through the addition of underwater exploration and gliding mechanics. And narratively, Forbidden West explores concepts both large and small with satisfying poignancy; dialogue with companions feels rich and alive. The excellent writing and world-building combined with the PlayStation 5′s haptic feedback facilitates a new degree of immersion.

The game follows Aloy once more, an outcast turned redeemer of a world in ruins. Set long after a plague of killer robots consumed all life on Earth, a primitive society has sprouted with the help of project Zero Dawn, a global network of terraforming systems and biomatter incubators built as humanity stared down imminent extinction. An AI named Gaia was designed to operate the system autonomously and revitalize Earth using nine subroutines, each with a specific function to make the planet hospitable again or restore life (purifying waterways, making the air breathable, reintroducing animals created from genetic stockpiles, etc.) Terraforming machines with designs inspired by birds, deer, dinosaurs and other animals were originally intended to help maintain the delicate ecosystem, but in recent decades they've fallen out of humanity's control and grown violent.

Following the events of Horizon Zero Dawn, Aloy is clearly uncomfortable with the hero worship her escapades inspired far and wide, having grown up largely alone and shunned by her tribe, and knowing that few around her comprehend the gravity of what's at stake. In one of the first cutscenes, she notices a statue honoring her as the city of Meridian's "savior" and cringes.

Gaia maintained the biosphere for centuries until a mysterious cyber attack forced her to self-destruct. Now Aloy must find a way to restore Gaia and get her subordinate functions up and running again, stumbling into the role of ambassador and peacekeeper for the colorful communities she finds along the way. Between gathering a ragtag group of fair-weather allies, setting up a home base and meticulously planning your crew's next big move, the plot takes on the vibe of an Ocean's movie - if the heist involved saving the world. 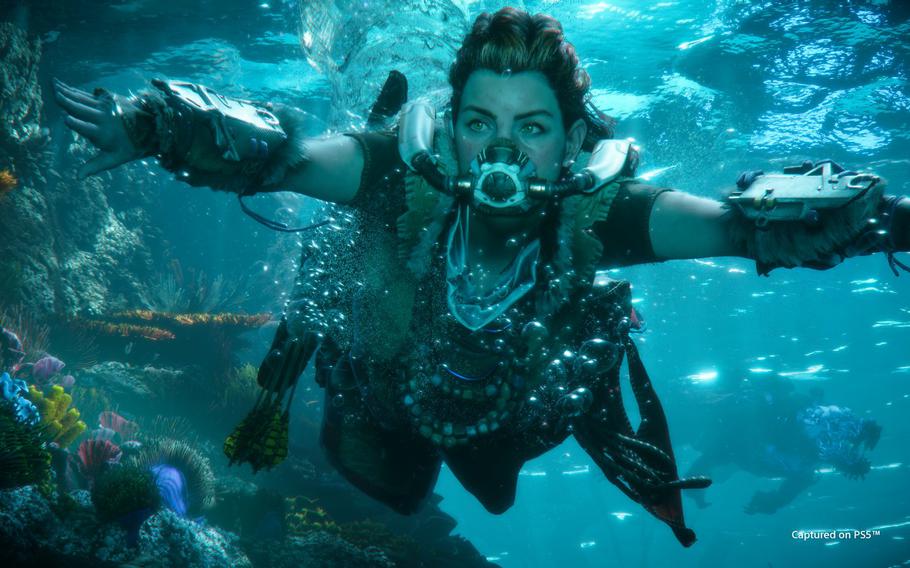 The environments you explore make it clear Guerrilla Games delights in giving players a range of options to solve any one problem. On battlefields, you'll find dead machines with combustible parts, ledges to grapple to and rain arrows down from, or zip lines to get away in a pinch. To infiltrate an enemy base, you can sneak in on foot or try to find a nearby waterway and take advantage of the game's new underwater exploration, surfacing deep in enemy territory. The environment becomes part of your arsenal in a way that feels natural and seamless.

The Pullcaster is one of several innovative tweaks to the first game's clunky climbing mechanics. Instead of yellow or white paint splatters denoting climbable ledges, you can now use Aloy's "Focus," the head-mounted AR device that gives what the locals call her second sight, to detect and highlight handholds automatically on any structure, both natural and man-made. It's a cross between the Animus technology in Assassin's Creed and the free climbing of The Legend of Zelda: Breath of the Wild. Some of the most fun I had playing was when I'd get lost in the sprawling environments, with the freedom to dive underwater and swim through sunken ruins or easily summit a mountain at a whim fueling an addictive cycle of discovery.

Forbidden West also takes a page from the Uncharted series in the environmental puzzles Aloy finds throughout her journey. Their solutions require manipulating a variety of tools like weighted panels, movable boxes and Aloy's glider to keep things interesting.

After playing for more than 40 hours, I'm still mesmerized by the core gameplay loop of building up my tool kit and adjusting my approach to take on new, more powerful machines. More than that, though, I'm mesmerized by the world. So many small details work in tandem to make it feel alive. At one point, while traveling through the desert, a small twister touched down nearby as I fought a herd of machines. I thought it was just a part of the scenery - until I strayed too close and began losing health. As you progress, NPCs reference Aloy's adventures in passing, adding honorifics to her name that change based on which quests you've completed.

The haptic feedback on the PlayStation 5 controller adds another layer to this immersion. There's a satisfying weight to Aloy's bow as you draw each arrow back for a shot, feeling the tension in the string vibrate through the controller. Sneaking through waist-high grass is a different sensation from strolling across open terrain. When I stab my spear forward, there's more resistance on the trigger depending on how tough the surface of what I'm stabbing is.

Forbidden West's graphical issues occasionally shatter this immersion. I ran into problems with textures and objects failing to fully load or popping in, as well as important items that wouldn't function as designed until I restarted the quest. The issues began cropping up about halfway through my playthrough, and became more frequent the further I progressed. During one cutscene, the game seemed to decide midway through that, actually, the scene was taking place underwater, and everyone's hair started flowing accordingly.

Most of the time, though, the visuals work without a hitch, and when that happens the results are stunning. Forbidden West luxuriates in its breathtaking set pieces. Cinematic shots are woven in naturally as you climb mountains or scavenge through relics of the old world. The ruins of real-world cities are some of the most visually stunning game environments in recent memory.

Occasional graphical issues aside, my leading criticism of Forbidden West is that, like a lot of open-world games, it feels bloated. When it comes to climbing Tall Necks, a type of side quest players will remember from the first game, Guerrilla Games shakes up the formula enough to keep things from feeling stale or repetitive. The same can't be said of Forbidden West's dozens of other side quests. The quality of writing and voice acting takes a steep dive compared to the mainline quests and characters. There are a dizzying number of optional activities dotting the world map, some of which are genuinely fun (like mech racing); others, meanwhile, feel shoehorned in at best (like the tabletop minigame NPCs won't stop challenging me to play).

Combat in Zero Dawn wasn't exactly simple, but Forbidden West piles on new weapon techniques and combos until the mechanics reach an intimidating level of density. Multistep combos are easily disrupted either by an enemy attack or a slight difference in elevation. I consistently ran into a glitch when activating "Valor Surges," powerful new stat boosts tied to Aloy's skill trees, where the camera would veer off uncontrollably until I aimed down the sight of my bow again. After extensive experimenting, I fell back to a tactic that got me through Zero Dawn: bombarding enemies with explosives. Still, I did enjoy some of the new weapons: I found a variation of the throwing spear, a powerful but slow ranged weapon, that could lodge into enemies and detonate an explosion. It quickly became my go-to.

I checked my progress after the credits rolled. Apparently, I've only completed 43 percent of the game. Even after 40 hours, I feel like I've only scratched the surface. While I likely won't exhaust every quest and errand and bizarre board game Forbidden West has to offer, I still feel compelled to explore more of its expansive, thriving world - just to see how Aloy's adventures continue to change it for the better.