Amity Square is a park in the Sinnoh region where Trainers can walk around with their Pokémon and talk to them to check their moods. (Nintendo)

Every Pokemon fan has a favorite generation, and that’s often based on the iteration they played as a kid. A distinct nostalgia colors the memory of the games, so that the first experience in the world of pocket monsters is the one that’s held in the highest regard.

I’ve never been in that situation because I jumped on the Pokemon train later in life. If there was effort I adored most, it would be Pokemon Go, which isn’t part of the main series. It was only recently that I played through most of the main series, and over time, I’ve learned to appreciate the franchise’s improvements.

That brings me and fans to the latest remakes — Pokemon Brilliant Diamond and Pokemon Shining Pearl. The two games are based on projects that were released in 2007 on the Nintendo DS. I didn’t spend enough time with originals to appreciate them, so I come to these games with fresh eyes. At first glance, modernizing the games presented peculiar challenges to the developers at ILCA, the studio that brought the game to the Nintendo Switch.

Thankfully, the team came up with clever solutions that take advantage of the modern console’s power and capabilities. Brilliant Diamond and Shining Pearl aren’t reimaginations of their predecessors; instead, they hew close to the originals. ILCA gives the remakes a facelift by transforming the sprite-based graphics into polygons.

Despite the graphical changes, the games retain their charm thanks to the cutesy, Chibi-style art. The switch to polygons also improves the level of visual detail, as the improved hardware lets the developers accurately reflect Pokemon off water and create more detail in the world. Elsewhere, the combat sequences are lovingly animated with fresh flourishes and effects that make the battles feel more visceral. 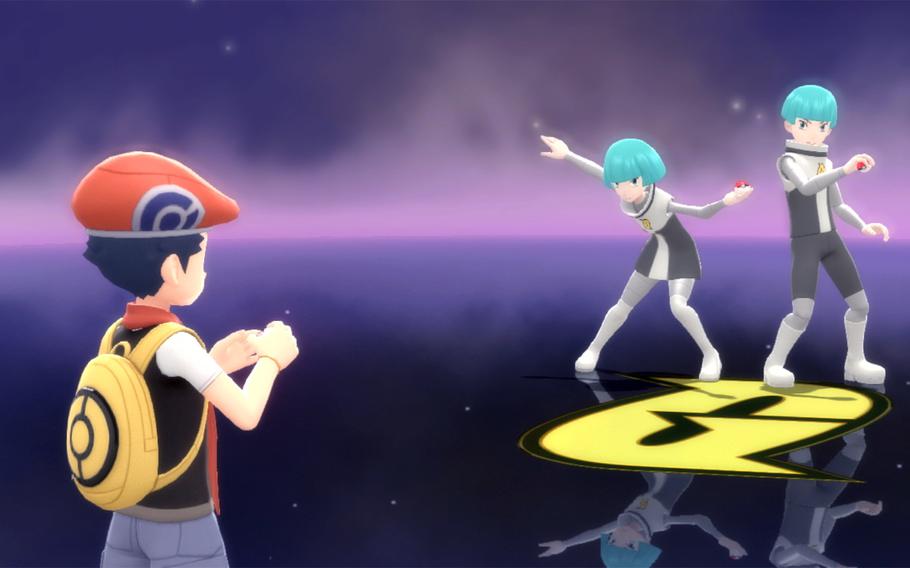 Pokemon Brilliant Diamond and Pokemon Shining Pearl updates the visuals and tweaks the gameplay to make it appealing to players, including faceoffs with Team Galactic. (Nintendo)

While it looks new, Brilliant Diamond and Shining Pearl retain the core gameplay and their quirks. Players adventure through the Sinnoh region, catching and taming creatures so that they can use them in battles. They battle troublemakers in Team Galactic, who are trying to use the powers of Pokemon for their own nefarious ends. At the same time, players will have to fill out a Pokedex and battle gym leaders in order to enter the Pokemon League and challenge the champion, Cynthia.

The story lines aren’t the best in the series and follow the same narrative beats as other entries. On the other hand, the Sinnoh region itself has more fascinating lore than other chapters because of its primacy in the Pokemon hierarchy, which has Arceus as the creator of the universe. The stories of the legendary and mythical Pokemon that players encounter are woven together to create a more fully realized world compared to other chapters.

Although Brilliant Diamond and Shining Pearl stick close to the path of the originals, the remakes take advantage of several gameplay refinements made over the past few years to make the experience more fun and less of a hassle. First off, HM moves are no longer tied to a specific Pokemon. Players can use them on the fly to overcome obstacles on the map. This opens up space on a team and cuts down on the need to backtrack to grab a specific Pokemon. ILCA also includes Fairy types, which were introduced later in the series, to this version. This change balances out the overwhelming powers of the Dragon- and Dark-type Pokemon in the campaign and brings in new wrinkles that veterans of the original must account for.

In addition, ILCA elegantly adapts the Poketch device to the Switch despite the console lacking the second screen of the Nintendo DS. The device, which acts almost like an iPhone, features numerous apps that helps players through the journey. It sits on the top right of the screen and can be blown out so that players can interact with it. It’s important to finding items, tracking Pokemon’s friendship status and counting steps to hatch eggs. There’s only one Drifloon in Pokémon Brilliant Diamond and Shining Pearl, and you need to add it to your Pokedex to access postgame content. (Nintendo)

Along with that, Brilliant Diamond and Shining Pearl make it easier than ever to trade and battle other players. The original Nintendo DS versions each had a cumbersome interface. Now, all players need to do is hit a button to connect to a room and trade with a friend locally. They can also meet players around the world via the Global and Union rooms. The whole process is much simpler and easier to do.

The developers bolster the gameplay depth on the remakes with elements such as the Grand Underground, Super Contest Shows, Poffin-making and the option to catch Legendary Pokemon in Ramanas Park. The Grand Underground is a fascinating maze of corridors and rooms that hold a fossil digging minigame that rewards players with stones, statues and other items. The underground rooms also feature Pokemon not normally found in the wild. Players can spend hours down there exploring.

Super Contest Shows and Poffins-baking offer a non-combat way to interact with Pokemon. Players build up their creatures’ cosmetic appearances by feeding them the right treats, and they enter them in shows to make them popular with the crowd. It’s nice but unnecessary distraction.

The bigger draw is Ramanas Park, which gives players the option to catch legendary Pokemon by finding slates. This adds to an already lengthy end game as players fill out their national Pokedex and hunt for rare creatures.

Best of all, the Brilliant Diamond and Shining Pearl set the stage for Pokemon Legends: Arceus, due out Jan. 28. The upcoming entry to the series is the biggest departure in the franchise in ages and takes place in the same region but decades in the past. By playing the remakes, players will undoubtedly appreciate the touches that the developer, Game Freak, weaves into the entry, but more than that, the remakes give fans a chance to explore one of the most intriguing entries to the series.