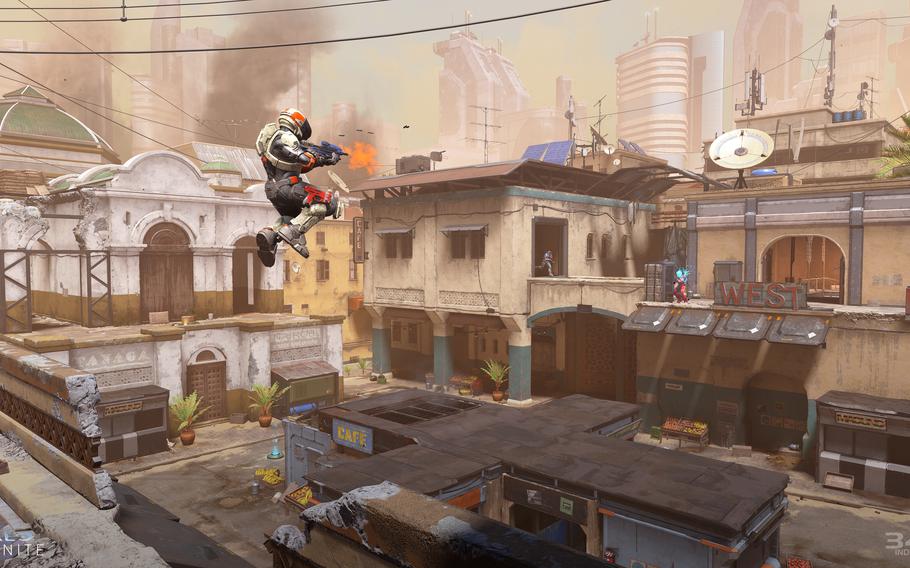 No one is as gleefully brain dead to go to battle as the creatures in the Halo franchise — and especially those in the campaign of Halo Infinite, a sort of reset for the massive sci-fi franchise after 2015’s bonanza of impenetrable intergalactic war threads that was Halo 5: Guardians.

It’s hard, after all, to put down a controller in frustration when, after watching the man-turned-war-machine Master Chief get slain by an unseen alien brute with a pulsating blue sword, a squealy voiced rodent-like-reptile creature yowls, “I got dibs on the helmet, guys!”

The whole of Halo Infinite is somewhat ridiculous. There are times Halo tries to be serious, though those moments are best left at the tip of an eye roll. But when Halo embraces itself as sci-fi gobbledygook — wrapping a warm hug around its cheesy dialogue and reveling in the weirdness of its core storyline of one man’s relationships with artificially intelligent female holograms — it soars as pulpy, timeless, space opera fantasy.

So far, every minute I’ve played of the Halo Infinite campaign takes flight.

Return to form, reboot — whatever descriptor one wants to use — Halo Infinite plays as a bit of a Halo greatest hits, merging the Master Chief narrative existentialism of the very fine Halo 4 with the early games’ patient level design, silliness and sci-fi slickness. As an interactive text it is still primarily a celebration of shooting with a variety of space guns, but even as someone who doesn’t often gravitate to the so-called “shooter” genre, Halo Infinite exemplifies the category at its approachable best.

The Microsoft-owned Halo franchise itself has for the past 20 years come to symbolize the modern video game shooter — less frantic than Doom, lacking the self-seriousness of Call of Duty and striving to balance complex storytelling with an over-reliance at times on space lore better left for 30 or so books that attempt to make sense of this universe. Star Wars but more militaristic in its mix of fantasy and sci-fi is the easy cultural comparison, as Halo turned the Xbox game consoles into a powerhouse and is as much a vital video game text as Super Mario Bros.

As those who have been able to secure a next generation Xbox console will be happy to hear, Halo Infinite is indeed a showcase for the new Xbox Series X/S. It’s a gorgeously vast world that emphasizes style over realism and delivers its violence with a smirk. Aliens are cartoon thugs, vehicles are wild to control and our fellow marines aren’t subtle in their excitement to go to war, here primarily with Halo villains known as the Banished.

Halo, though, isn’t a game for sneaking; it’s a game for enthusiastically swapping guns, firing static-energy blasts out of rifles, throwing up forcefields and generally making a mess of anywhere there are bad extraterrestrials. Try, for instance, to be quiet, and inevitably someone will see Chief’s hulking presence or a non-player-controlled marine will run in bombs a-blazing. But Chief is more spritely this time around, as a grappling hook allows players to ascend up mountains as if Chief is feather-light and not the bulk of a dude he is. It’s handy also for escaping overmatched battles, wrangling faraway weapons or just electro-stunning opponents that have nasty cloaking abilities.

Over its decades “Halo” has become so deeply wedded to interactive, environmental storytelling that attempts to turn it into a film have often sputtered. A Paramount+ series is in the works and due to launch in 2022, but any cinematic or television adaptors have a challenge on their hands. So much of “Halo’s” appeal lies in these more abstract facets. “Halo” dominates because of its tone, feel and player navigation — or lack of one, as I admit I smiled when my three-seater of a military vehicle got stuck on a rock.

But from little details — the “zoop” of Master Chief’s suit regenerating its power and shields — to grander elements of technological mysticism and the examination of our relationship to the artificially intelligent, Halo Infinite understands the fairy tale heroism of the series is just as crucial as its run-and-gun scenes.

When confronted, for instance, in Halo Infinite of visions of the past — or perhaps a nightmare — we’re asked to ponder what’s real and what’s “clusters of recursive code.” And when we meet for the first time a new magical foe known as the Harbinger, they say, apparently without cringing under their helmet, “I am the harbinger of true truth.”

That’s not to say there isn’t some meat beyond Chief’s one-liners (when told, at the game’s start, that he and his space flying companion may be the only two humans left alive in the district of the game, he replies, “Then there’s still hope,” and most players will expectedly groan). Halo Infinite ultimately wants to balance the intimacy of Halo 4’s narrative, which focused primarily on Master Chief and his relationship with his now estranged AI pal Cortana, with the more sprawling, open-world approach of modern video games, where the core story is augmented with various side missions and mini-quests.

In my 18 or so hours with the game, I think Halo Infinite succeeds in this goal. Typically, when reviewing a game, one is wont to focus primarily on the key story-focused missions, but I’ve wanted to take my time with Halo Infinite and haven’t stressed myself to rush through it in five days. Optional challenges are typically shorter than those that make up the narrative spine — find Cortana, rebuild humanity — but work well for lighter game sessions.

More important, they augment the main story. Here, Chief is marooned on a “ringworld” — a floating space sphere that in the Halo universe is filled with mountainous ecosystems, underground caverns and cold, imperialistic space corridors — trying to uncover the mystery surrounding Cortana. A ringworld is alien-constructed but feels more or less like a planet built around and on top of metallic structures rather than sediment. Not wanting to go it alone, I’ve taken some time to rescue some game-controlled marines from the Banished, hunt down rare weapons and generally just make it easier to traverse the field as the Cortana mystery deepens.

I like Halo best when it takes time to examine Chief’s relationship to Cortana, and here he has a new AI companion — we’re introduced to her as “the Weapon” — which adds some wrinkles and questions to the tale. Cortana, in short, has gone rogue and was supposed to be deleted, but we wouldn’t be playing the game if things were so simple. And again Chief balances his patriotism with his attachment to Cortana. Look, when you’re an enhanced human who lives in a clunking super-powered space suit, you take intimacy where you can get it.

But there’s a soul here too. A lovely animated scene came when Chief was rescuing a fallen peer. Chief doesn’t remove his helmet, so instead the camera focused on the reflection in the glasses that surrounds our hero’s eyes, zooming in as our fellow solider uttered his last words as we watched his eyes implanted where those of the Chief would be. The message was clear: What we were seeing is what Chief was feeling, and it was all impressively articulated via the Series X.

Without knowing yet where this tale will end up, I can still say that so far I haven’t had as much fun with a Halo game as I have had with Halo Infinite. Hokey? At times. Silly? Definitely, but space battles seem to live in many of our childhood dreams, and Halo Infinite delivers them with a tension, camaraderie and goofiness that’s akin to a weekend afternoon laser tag bout.