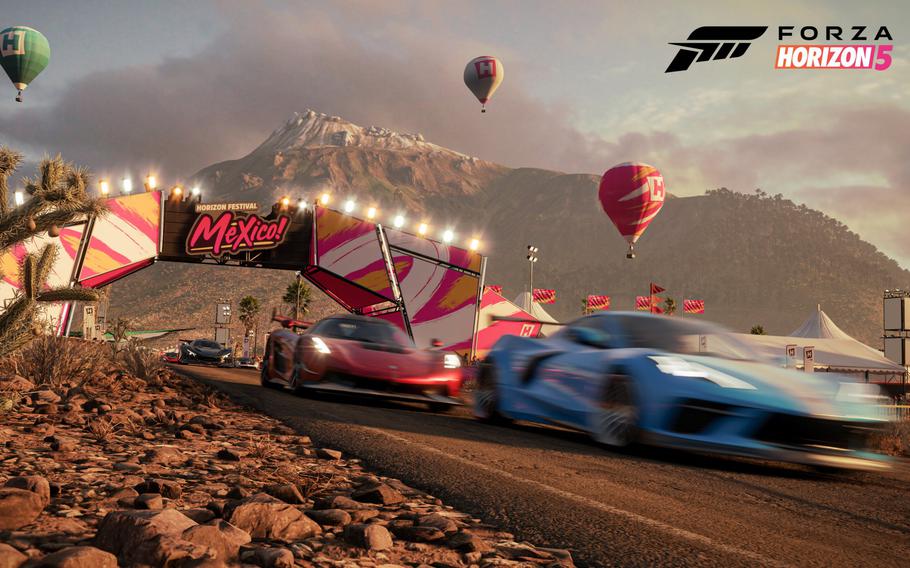 Forza Horizon 5 offers all the great features of the game’s previous versions with even more flexibility. (Playground Games)

Reviews of Forza Horizon games often veer into reminiscing about old memories of playing racing games. The reason for this is simple: Forza Horizon 5 offers almost everything in the history of the genre, and does it better.

The cars are lifted straight out of a world-class driving simulator. The driving matches the best arcade racers ever made, but it can also be customized to extremely specific preferences, including tweaking transmissions, steering and brakes. And it's got the Forza Horizon signature feature: an open-world game structure so rich with content and game modes, it rivals the best adventures in the medium.

It is an exceedingly generous game. The hook is immediate: You start with a beautiful Corvette with a brilliant orange paint job that pops on an HDR screen, and when you win (or even lose) one of your first races, you earn an entire Lamborghini as one of your first cars. Beyond that, just the mere act of driving to and from places nets you experience points, which unlock even more races and events in which to compete. Did you crash or plow through a bunch of trees? You get some points. Are your ears working and listening to the in-game radio? Nice, the game says; you get 1.5 times as many points whenever a special song dedicated to boosting your experience plays.

These are all returning features that keep the Forza Horizon series on the top shelf of open-world games, let alone the racing game genre. But Forza Horizon 5 offers even more flexibility in how you unlock things. Rather than funneling you down a preset path of events, this fifth game gives you the freedom to tackle anything you want in any order, which is great if you'd rather participate in some events more than others. For instance, I've always preferred the cross-country events over lapped races because of the variety of track and environments you zoom through.

And there's something about the Mexico map here that feels so much more connected to the land than Great Britain did for the previous game, Forza Horizon 4. Perhaps it's my background and bias, having grown up on Guam, which features similar dirt roads and jungles sowed by centuries of Spanish colonization, the kind I learned how to drive on using my friend's pickup truck. But Forza Horizon 5 has grander ambitions than previous titles. You'll feel it once you race down the side of a volcano with the Mexican landscape stretching back miles farther than your eyes would ever be able to see in the real world. You'll feel it when you discover ancient ruins inside a lush, damp jungle.

All of these elements combine to make Forza Horizon 5 the first killer, can't-miss game for the current generation Xbox Series X and S consoles as well as Microsoft's Game Pass subscription service. It's a game that I think anyone can immediately find appealing. Video games are often power fantasies, and that goes for driving games as well, a genre in which players fear no risk of damaging their real cars or endangering their lives. Instead, Forza Horizon 5 asks you to drive off a cliff and straight into the sky, take in a breath, and trust in the landing. You will almost always land, and it'll always feel amazing.

This is only enhanced by this game's new Horizon Adventures feature, which is much like the story-driven events of the past games. The thumping house music is always timed to the race, its jumps and the various graphical pyrotechnics that may happen. The aforementioned volcano will shake pebbles loose, while driving into a sandstorm will cover you not just in sand, but memories of those amazing sequences from "Mad Max: Fury Road." You'll be thinking "Witness me!" and the game will acknowledge your showmanship, praise you for it and add a few more thousand points to your scoreboard.

Developer Playground Games joins Sony's Insomniac Games in offering just the second game this year to truly showcase the benefits of the new consoles and the current generation. It is an exceedingly well-optimized game boasting the most beautiful visuals since the PlayStation 5′s Ratchet and Clank: Rift Apart. The visuals only enhance the play experience because you're simply not going to see as much detail in real life as you do in this game, especially when you catch some air and your eyes can steady on the excellent ground details that span as far as you can see.

Along with tailoring the difficulty of the artificial intelligence drivers you're competing against, you can adjust the speed of the game (while offline), traction control, brake strength, and whether you want realistic wear and tear on your vehicle or the ability to just zoom through as an invincible mass of steel and engineering. For anyone who's been leery about trying racing games due to their speed, Forza Horizon 5 is trying its best to get you not just to love the game, but love the genre itself.

The only possible mark against Forza Horizon 5 is that, at its core, it's simply more Forza Horizon, especially if you played 2018′s fourth game. But the Mexican landscape, the vast customization options for gameplay as well as your character, and the visuals all come together to create what's easily the masterpiece of the series.

Here's where I finally wistfully reminisce. When I played Stunt Race FX for the Super Nintendo in 1994, I was captivated by the physics and movement of the 3-D polygonal cars and their spatial relation to the Earth, gravity and other racers. The developers at Playground Games seem to have, at some point, felt a similar fascination, and sought to make the best possible game from it. And they did.