A game with big personality

by
Christopher Byrd
• Special to The Washington Post • November 9, 2021 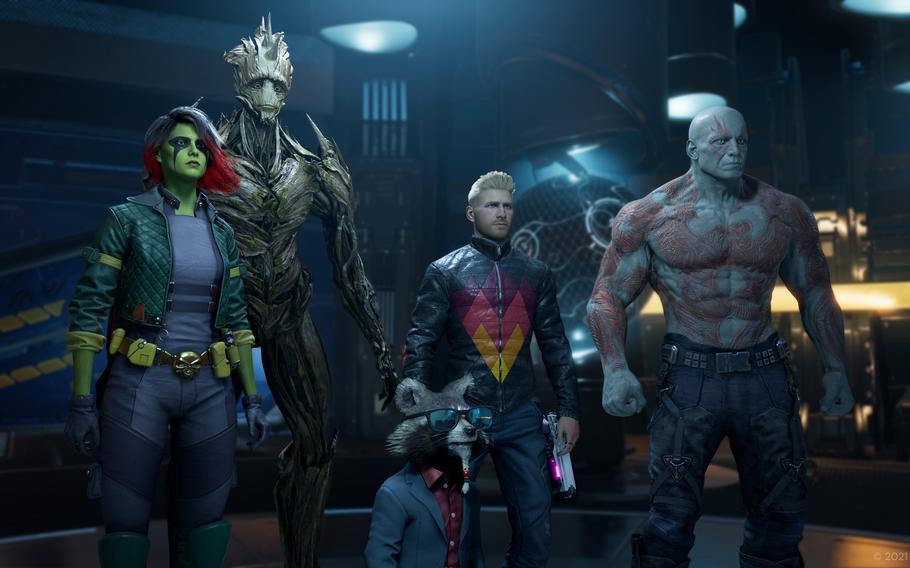 If you enjoyed the interplay between, from left, Gamora, Groot, Rocket, Peter Quill and Drax in the “Guardians of the Galaxy” films, the video game might just be for you. (Square Enix)

Having long ago relinquished my affinity for Marvel franchises in favor of indie comics, I wasn't clamoring to play Guardians of the Galaxy. Yet, much to my surprise, I found the Guardians' rollicking banter and oscillating group dynamics nearly irresistible.

Doubtlessly, the ‘80s vibe oozing through the pores of the group’s leader, and the player’s avatar, Peter Quill, softened me up. Quill’s love of the ‘80s, particularly its music, neatly aligns with the height of my own Marvel mania and my fondness for groups like Motley Crue. So, I confess a certain weakness to the game’s nostalgic pull, which is grounded in its devilishly good soundtrack and buddy-movie spirit.

Guardians of the Galaxy is a competent, if not especially electrifying, action game that sails along on the back of strong voice acting and the sheer momentum with which it introduces new scenes and charismatic characters. Assuming the role of Quill, players take the Guardians on episodic missions that see them, among other things, go to extravagant lengths to pay a fine, incense a monster collector and square off against a cult that makes "faith batteries" by harnessing the energy of brainwashed people.

Playing as Quill typically finds you shooting your blasters at enemies ranging from fairly undistinguished robots to bouncing balls made up of eyeballs. Quill's guns will overheat if you continually depress the trigger, but by tapping the trigger at just the right moment, he can pull off a Gears-of-War-style active reload, which adds a rhythmic quality to the gunplay. On the normal or hard difficulty level, nailing the reload can often mean the difference between life and death. (Speaking of difficulty levels, Guardians of the Galaxy has an array of welcome accessibility options that allow you to tweak things - such as the damage dealt and received by enemies, on the fly. Even quick-time-events can be automated.)

By pressing the left bumper you can call up a wheel to access the special moves of the other Guardians. In noncombat scenarios, you can direct individual teammates to perform tasks for which they are uniquely equipped. For instance, Groot, the anthropomorphic-looking tree, can stretch his limbs over a gap to create a bridge, while Rocket, the group's engineer who insists you don't think of him as a bipedal raccoon, can crawl into tiny spaces. As for the group's combat abilities, it's not until late in the game, when you unlock their mega abilities, that the Guardians really begin to shine.

My favorite of all the mega abilities is Rocket's Five Barrell Barrage which sees him trot out a bulky projectile contraption that looks fabulously incongruous supported by his small frame. Making plentiful use of my teammates' abilities sped fights along and reinforced the impression that they were equally engaged on the battlefield. Usually, my computer-controlled teammates did an okay job trading light blows against their adversaries, but more than a few times throughout the campaign I'd notice one of them pacing aimlessly for a short time in the midst of battle as if wondering where to go next.

There is a moment toward the end of Guardians of the Galaxy that captures, in a small way, what I most liked about the game. After deciding to do a bit of monster hunting, the crew set their course for the planet where the dragon-like creature, Fin Fang Foom, resides. Entering the planet's atmosphere, their ship smacks into some floating debris resulting in mechanical difficulties. This leads to it grazing the sides of mountains and skimming the tops of trees before crashing into the snow.

Catching her breath, Gamora, the green-skinned warrior known as the deadliest woman in the galaxy, starts laughing and says, "This is us. This is how we park." Her quip (which I took as a riff on Montel Williams' song, "This is How We Do It") causes her crewmates to erupt in laughter. Then Drax, the colossal warrior with no ear for irony, says, "We were not fated to die this day unless, of course, Fin Fang Foon devours us all!," which causes another convulsion of laughter. The scene makes you feel as if the characters genuinely enjoy each other's company.

The true accomplishment of Guardians of the Galaxy is that it makes a virtue of its chattiness, which is the exact opposite of, say, Ratchet & Clank: A Rift in Time. Going into it, I never would have thought that listening to the Guardians address their ups and downs and hash out their personal flaws would prove as (if not more) interesting than many of the game's puzzles and combat scenarios.

Here is a game where personality is everything.