Metroid Dread is a great story wrapped in a hand-cramping, confusing grind 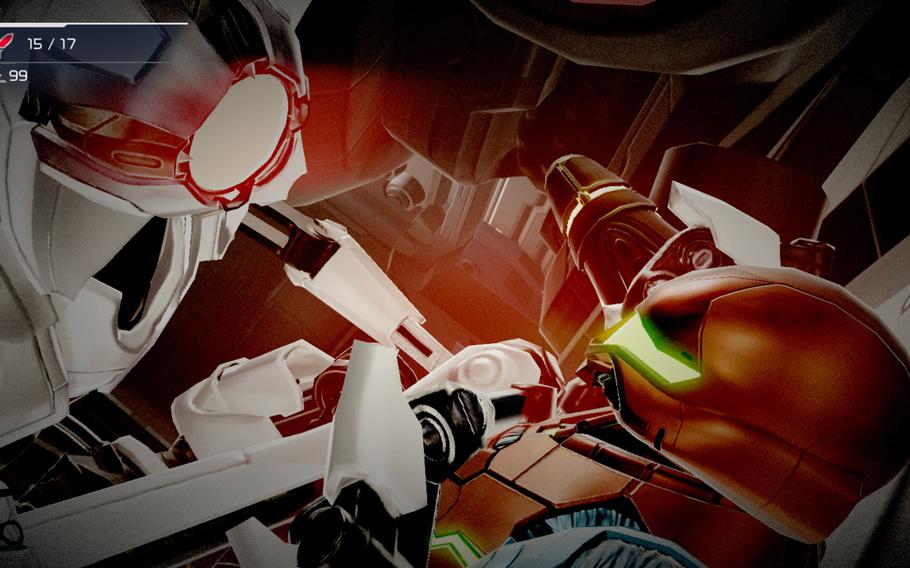 Metroid Dread has its gameplay issues, but for Metroid fans, it’s a must. The game also packs some startling storyline reveals. (Nintendo)

It’s the rare work of art that births an entire genre, but Metroid accomplished this in 1986. In a world in which running to the right of a screen was the default action in a video game, Metroid dared you to run left, up, down and all over an entire planet.

The genre is now commonly referred to as Metroidvania, which acknowledges the Castlevania series as the next franchise that meaningfully moved the genre forward. Today, it is among the most popular genres with independent studios, and its influence is felt in games as diverse as Dark Souls to the Batman: Arkham series.

Metroid Dread is the first new game in the series since 2017. It has to balance reintroducing the series — one that has struggled in the sales department relative to Nintendo’s other notable franchises — to a new generation of players and recapture what made the series so influential in the first place. And the challenge comes at a time when we’ve seen high-quality, Metroid-like games (like Ori and the Blind Forest) that understand why the original Metroid was such a compelling, unforgettable work.

Metroid Dread and Spain-based developer Mercury Steam very nearly accomplish all of these goals, except for one key component: Its world design is hard to commit to memory. Players of Metroid games are required to remember inaccessible locations they discover early on so when they finally do find the tool or powerup required to access that location, they would know to revisit the area and find a reward.

Planet ZDR of Metroid Dread makes a noble attempt at this. The backgrounds, for example, are often stunning, particularly when protagonist Samus Aran stumbles upon the palatial grounds of ancient Chozo civilizations, a race with which she’s had a long history. Unfortunately, backgrounds don’t do enough to make navigating ZDR easier or more memorable. It’s the gameplay situations that matter more, and it might be a case of spreading itself too thin. While the planet has eight different regions, more than any other Metroid game to date, that expanse seems to work against the game’s strengths.

For example, the Cataris region is supposed to represent the classic “fire and brimstone” trope. However, there are at least two other regions with significant rooms also caked in lava and fire. This makes navigating the map a pain, since your mind has to keep track of multiple lava-infested regions to revisit. This would be less of an issue in a game with fewer regions, but I don’t believe the eight regions do enough to distinguish themselves from one another. 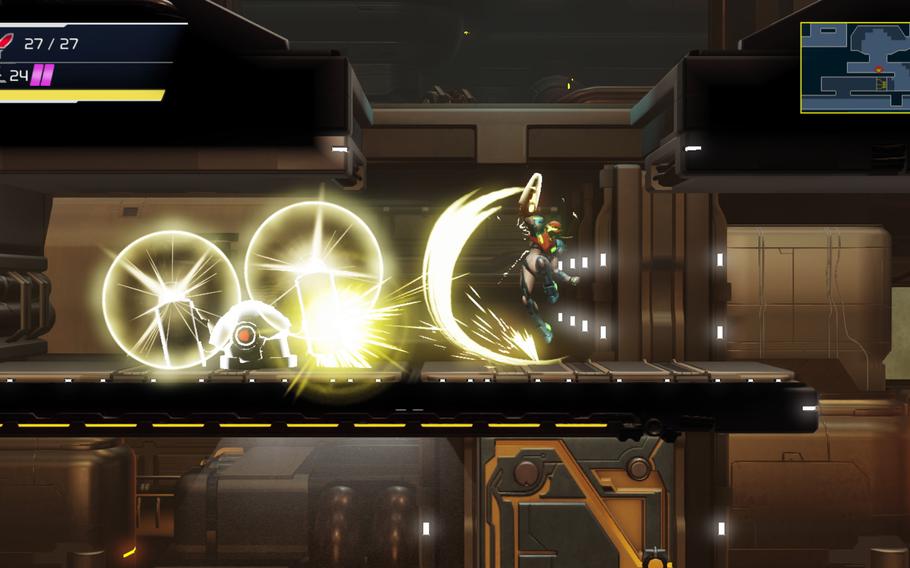 The deeper the players wade into Metroid Dread, the more compelling the gameplay and environments become. (Nintendo)

The result is a Metroid game that feels like it is designed by gridwork and less about creating a convincing world. Again, background details like wildlife roaming the planet help alleviate this somewhat, but in a Metroid game, the foreground should be a priority over the background. The first and second Metroid games were mostly designed with pitch-black backgrounds, yet I could still describe what the Brinstar and Norfair regions were like because the developers placed the details of those regions at the forefront. Norfair was filled with lava, and its music was a raging, syncopated march. And although it’s been years since I’ve played Metroid Prime, I could still tell you what the snow-capped Phendrana Drifts look like. But put a space blaster to my head, and I would not be able to describe the Ghavoran or Dairon regions of Metroid Dread, a game I played as recently as last week (Oct. 5).

That’s not to say Dread doesn’t have its saving graces. For Metroid fans, this is going to be a must-play, if only to see a story that is mindful of every previous game in the series. While many believed Dread would be a true sequel to the excellent, horror-tinged Metroid Fusion, it’s more accurate to say that it’s a continuation of that story, as well as the ones found from Super Metroid and even the original Game Boy release, Metroid 2: Return of Samus. I won’t risk ruining any surprises, but it’s safe to say that Dread will force longtime players to look at the older games in a new context.

The end of Metroid Dread left me stunned in its story reveals, and these moments ultimately justified this new entry in the series. Dread raises huge questions for Samus and the series moving forward. I can tell it’s a tale that series writer Yoshio Sakamoto has been wanting to tell for years, and it’s a victory for him and for the fans that it saw the light of day.

And the game got better, both in gameplay and in its environments the deeper I plumbed through my 10-hour journey. Later locations like Ferenia and the aforementioned palatial grounds may stay in my memory longer than others. And as Samus tears through the planet, older locations will be reshaped and redesigned to keep backtracking feeling fresh and ever so confounding. As you regain your powers (yes, Dread follows the classic Metroidvania trope of stripping her of all her abilities at the start), the act of exploring and finding more items on the planet finds a comfortable groove.

But that groove is sometimes threatened by ZDR’s world design. There will be certain choke points in the planet where the player won’t be able to proceed unless they figure out what to do next or how to beat the next enemy. This may be an issue for some players, because this game is difficult. Metroid Dread requires you to hold the L shoulder button to aim, the R shoulder button to select missiles, Y to shoot, sometimes B to dodge, and the R trigger to use a grappling hook. All of these buttons and abilities must be pressed, sometimes all at the same time, while you dodge screen-filling attacks that hit hard and can take out anywhere from one to three energy tanks in a single swipe.

The melee counter from Mercury Steam’s first outing, its Metroid 2 remake on the Nintendo 3DS, adds another feature that requires constant monitoring while balancing everything else. While I appreciate the melee counter adding to the appeal of Samus Aran as an untouchable bounty hunter, it also adds an unnecessary layer of combat that’s trying to balance so many things at once. This issue is only worsened by the fact that several boss encounters can only be finished by performing a melee counter like a quick-time event. Failing this means fighting the boss again until they wind up the attack again.

The new enemy encounter of Dread are the nigh-invincible EMMI robots, seven of which stalk you in predetermined, locked-off areas of the planet. These sequences are great and far more varied than you might expect. Each one escalates when it comes to tension, pressure and even speed. The Metroid series has always had a strange balance between its heavily inspired H.R. Giger aesthetic (as seen in “Alien”) with the rough-and-tumble, space-faring Flash Gordon tales, complete with ray guns. With the EMMI machines, “Dread” is able to fully lean into its horror roots to great effect, as some of these machines will throw new twists and turns at you to keep you on your toes.

Once again, these EMMI encounters are difficult. There’s only one kind of weapon that can kill them, and it’s only given to Samus as a reward for surviving the EMMI and the planet long enough. Once Samus expends this weapon, it’s done until she finds another one. The EMMI segments almost become a whole different game, as this weapon also requires a new control scheme, and even a new perspective, to wield.

I have to stress that this game’s battles with its bosses and EMMI robots left my hands cramped. Metroid Dread is a game that requires not just a working, instinctual knowledge of every single one of Samus’ tools, but the dexterity to pull them off. While every attack in the game is avoidable, you’re likely going to see a “Game Over” screen several times in a row until you memorize these enemy patterns. The game has a generous number of checkpoints, especially outside boss rooms, but this only underscores how Metroid Dread will funnel you into choke points until you and your fingers are able to wriggle yourself free, back into the rest of the world.

To be honest, I had hoped that Metroid Dread would have taken important lessons from its contemporaries, like the exemplary 2017 game Hollow Knight by indie studio Team Cherry. That title presented loneliness and solitude in ways the original Metroid strove for back in 1986. I’m all for reviewing games as they are, and this is a fine Metroid game by any measure, even with my complaints about world design.

Metroid Dread was always going to struggle against its own legacy. I can’t help but think of what we’ve been missing since Nintendo left its wildly innovative spin-off Metroid Prime series to languish for the last 14 years. Nintendo has promised a fourth game in the main line series, and that kind of fresh look at the Metroidvania genre demands a revisit. Metroid Dread is a good Metroid-style game, but does little more. Even the EMMI horror aspect was previously explored at the end of the excellent remake of the first game, Metroid: Zero Mission.

As the game industry has proven throughout the years, the Metroid formula is worth iterating and reiterating upon. Now that the formula is back home in the original series that created it, here’s hoping Nintendo remembers this too.