Lost in Random: a dicey situation 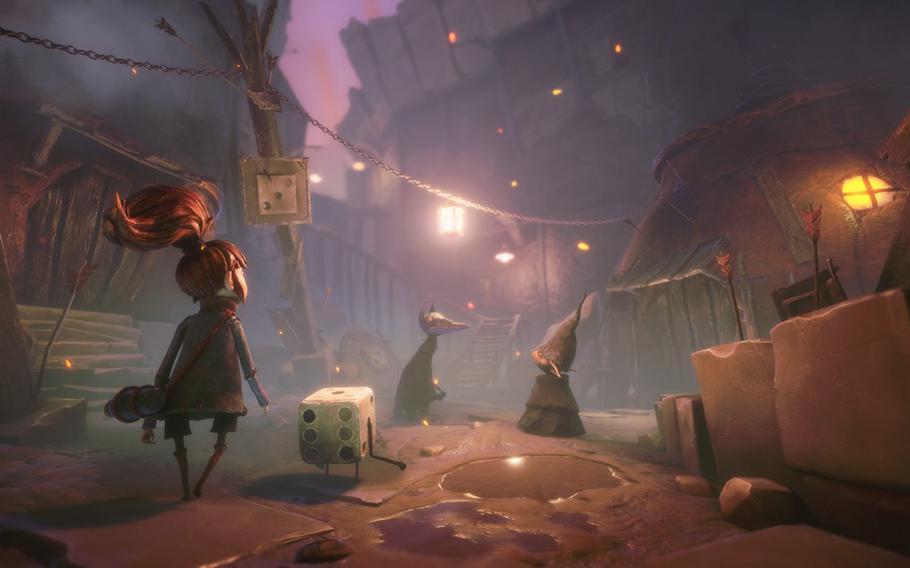 Even, left, and Dicey explore the realms of Lost in Random. (EA)

A girl, some dice and a board game world — those seemingly incidental images came together in a painting, and from that image, the idea of Lost in Random sprouted. For creative director Olov Redmalm, a distinct vision grew out of that inkling, but what’s remarkable is how the team at Zoink Games managed to focus their ideas through the prism of that concept and create a captivating adventure.

It’s a title that transports players to a surreal but somehow logical dark fairy tale world. It begins with two sisters — Odd and Even — who live in Onecroft, one of the lowest slums of the Kingdom of Random. This is where the campaign begins as Even’s sibling turns 12 and by evil Queen’s law, Odd has to roll the one true dice to figure out where in the six realms she would go. She ends up in Sixtopia with the Queen and is whisked away.

A year later, Even still misses Odd and has dreams about her. After a particularly strange dream, she’s visited by a strange ghost, and while pursuing an apparition that she believes is connected to Odd, she embarks on a quest to see her sibling. That takes her to other locales in Random; each place has its own culture and problems as the Queen has tyrannized the kingdom. 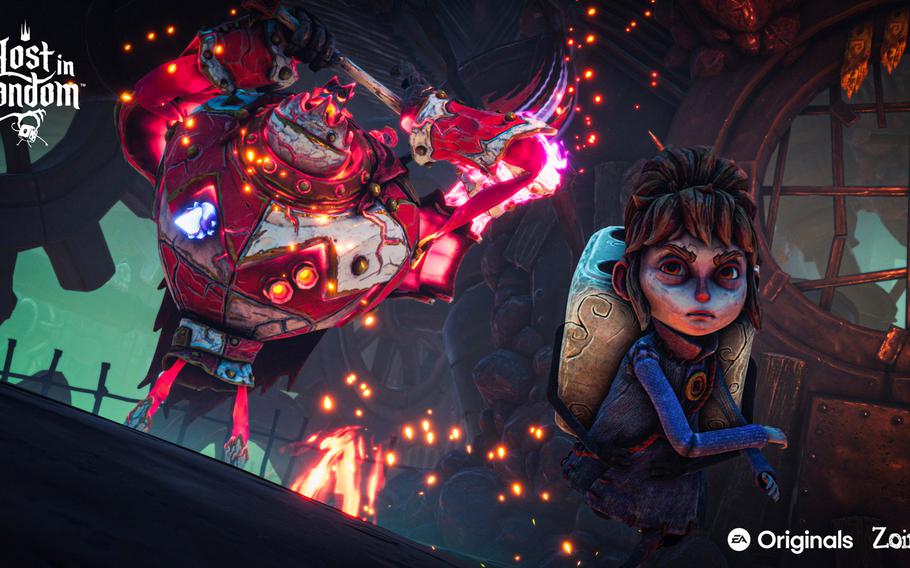 Fivetropolis is one the realms that Even ventures through in Lost in Random. (EA)

Onecroft is the lowest rung. Two-Town is helmed by a mayor who leads a constituency full of split personalities. Threedom is in the middle of a three-sided civil war among noble siblings, each of whom suspect the others of regicide. Fourburg was once the site of a chivalrous city, but the Queen has reduced it to rubble. Amid the ruins, a Las Vegas-like destination has emerged. Fivetropolis, with its soaring skyscrapers, used to be where artisans made cards, but it has been turned into the Queen’s war machine. Lastly, Sixtopia is ballyhooed as a paradise but few have confirmed anything about the realm.

Dice play a huge role in the iconography of Random as more citizens used to have a partner die and these dice wielders used to compete in epic contests of chance. In Lost in Random, dice act as spell books that allow users to materialize weaponry or play tricks on adversaries. After the Queen took over, she eliminated all dice — save for her own — in the No Dice War. She rules with absolute power.

What makes Even so special is that she befriends a die named Dicey, and together, they venture through the diverse locales solving the dramas that plague them. Zoink flexes its creative muscles, filling each destination with a foreboding whimsy. Visually, Lost in Random has much in common with “The Nightmare Before Christmas,” and the game wears that influence on its sleeve with its spindly characters and outlandish architecture. The developers stick to the motif of classic games and use it brilliantly. Even runs into passageways blocked by domino walls and she comes across houses made of cards.

That thinking extends to the gameplay, which is the most impressive aspect of Lost in Random. During combat, Even must power up Dicey by using her slingshot to knock crystals off enemies and it allows her to draw up to five cards from a deck. Players can toss Dicey at any time, and doing so sends Even to the Dicemension where time freezes for nearly everyone except for her.

From there, she can grab weapons, set up traps and add perks. There’s one caveat: The number she rolls with Dicey is the energy she can use to spend on cards. Each card has a cost, with the more powerful ones requiring more energy.

With 15 cards in a deck, players may not always draw what they need. If they’re low on health, they need to hope they can grab an elixir card. If they don’t have weapons to fight enemies, they’ll need to come across a sword or bow in their draw. Keep in mind, these cards have values, and in the beginning, Dicey is missing several pips. As players advance through each kingdom, they’re rewarded with new dots that they can ask a friend named Seemore to install.

Early on, Lost in Random’s combat focuses on weapons and healing. It’s limited because Dicey can’t roll numbers higher than a three, but as the campaign advances, players discover more options. They gain more cards via side quests or purchase them outright from Mannie Dex, a near-ubiquitous vendor that pops up in the strangest places.

More power in Lost in Random leads to more choices and it lets players enjoy the depth of the combat. Using concepts from Hearthstone and other collectible card games, players can craft decks to emphasize a certain style of play. If players like melee combat, they can throw in weapons and cards that enhance that. If they like traps and ranged combat, they can build a deck emphasizing that.

The ability to stow away cards from draws is helpful. Players can pin up to three, which lets them hold on to valuable cards if they don’t have a high enough roll to use them. It’s an ingenious concept, melding action role-playing and card games to create an innovative avenue of play, one that has so much potential. Zoink just scratches the surfaces of it.

Unfortunately, Lost in Random isn’t a perfect indie project. The hard linearity and uneven campaign holds the game back at times. One of the annoying parts is that, Even can’t move forth from realm to realm. The adventure is one way. That means if players miss a side quest, there’s no way to return to it. They have to be thorough. Additionally, the game lacks a traversal element. Even just walks around the world and that’s it. She can’t jump or get around with a vehicle. Random is a world that begs to be explored but there’s not much to do other than to shoot clay owls that hold money for cards.

The other flaw is that though Lost in Random starts off strongly, it meanders in the middle and has difficulty balancing the lore and its themes. The storytelling isn’t as tight as in such games as Psychonauts 2. Chance, misfortune and sisterhood are all key subjects but the realm’s disparate dramas don’t explore and feed into these themes until the powerful finale. It makes the game feel scattered halfway through.

Still, Lost in Random is a strong jumping-off point for a new style of game that holds intriguing potential.