The Ascent, an arcade shooter throwback, is my favorite game of 2021 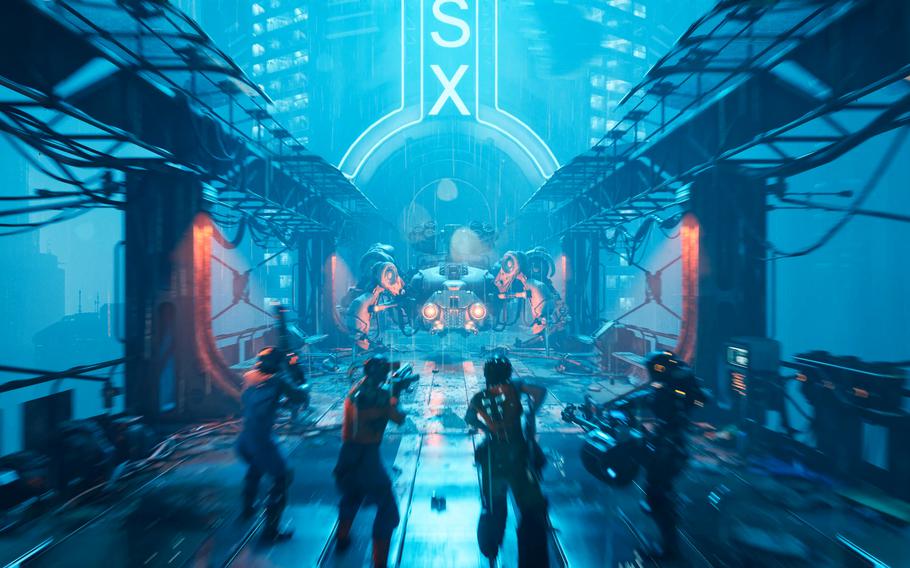 The Ascent, a throwback to the shooter games of the ’90s, will remind players of old times. Players are mercenaries working for a large corporation, called The Ascent, basically fighting for their freedom.  (Neon Giant)

The Ascent reminds me of so many other games — but in a very good way.

When I shoot through its cyberpunk, isometric city, leaving a wake of bodies and bloodstains, I think about Smash TV, the classic 1990 arcade shooter that helped popularize the twin-joystick shooter genre. The classic Contra comes to mind; how its infinite ammunition guns made the game less about how many bullets you need, and more about how you're going to shoot. I recall how Gears of War for the Xbox 360 felt like a 2006 update of the Contra formula, starring caricatures of burly soldier men barreling and shouting through an invading force of evil aliens.

I even think about the forgotten but once-controversial 2015 game Hatred, which caused a firestorm for its depiction of mass murder of innocent people. There are no house parties to crash in The Ascent, but players can still stroll through a cyberpunk subway station, food market or any other setting and leave a similar trail of bystander bodies. The difference from Hatred is that none of that carnage really benefits the player. The corporate-run planet of Veles and its citizens are mere collateral damage. It contributes to this foreboding sense of ever-present strife and conflict. It's gory like a classic '90s video game. And of course, I think about Cyberpunk 2077, and how with The Ascent, a 12-person studio (with support from other teams) was able to craft a believable dystopian future in recent years that doesn't fall apart when you try to play it. That's not to say The Ascent is free of bugs. Currently, the game has a few quests that are unable to progress unless you reload a checkpoint. But as bad as that is, the smaller, tighter nature of the game means its setting never really threatens the consistency of play and fantasy, as it did with CD Projekt Red's recent bug-ridden title.

I've said a lot without talking about the actual game, but that's because it isn't anything you haven't seen before. The Ascent feels like a celebration of arcade shooters long past, and it's executed so well, I want to reciprocate some of that adoration. It's become my favorite game of 2021.

Even if there's nothing new about The Ascent, every facet of its presentation and gameplay feels like it was molded by veteran hands. The founding team of Swedish studio Neon Giant (The Ascent is their first game under that banner) is made up of developers who worked on Gears of War, the recent Doom series and Far Cry 3, all modern exemplars of the shooter genre.

It has light role-playing elements, though the game doesn't offer hours of upgrading guns and skill points. Players can assign skill points or upgrade points as linear investments by picking up purple glowing items around the dense map. The game limits how much you can upgrade, encouraging fresh replays. The character designs are limited, generic and ugly, although The Ascent thankfully lives up to the promise of the cyberpunk genre by allowing players to alter their appearance and gender at any time.

This ugliness doesn't extend to the planet of Veles and its cityscape — on the surface, at least. Within a few minutes of starting the game, you'll be greeted with splashes of neon color and mountainous architecture. The Ascent builds on the concept of "destroyed beauty," coined by Gears of War creator Cliff Bleszinski in 2006. In those games, destroyed beauty meant ancient, ruined architecture. In "The Ascent," it envisions the kind of monuments humans can erect when the notion of humanity is erased from the equation. Rather than buildings and landscapes, the destroyed beauty of Veles is the soullessness of its people, made material in its sleek buildings and neon signs.

Neon Giant flirts with open-world concepts by creating several "town" areas where players can rearm and reconstruct themselves or pick up side missions and flavor text about the world. Like with the skill and weapon improvements, the game is light on role-playing mechanics, but that helps it achieve its mood and pacing. It gives players time to soak in the atmosphere and take stock of the environments and absorb its booming soundtrack. While action sequences thump with bass, the quieter moments are backed by music like the Buddhist prayer chants in anime films like "Akira" and "Ghost in the Shell." If The Ascent has one big issue, it's that its aesthetics are almost too obviously referential. It's cookie cutter cyberpunk.

There's not much to talk about when it comes to story either. Each player is an anonymous mercenary working for The Ascent, the largest corporation on the planet, and you're basically fighting for your freedom by taking on bloody jobs around the city. That last detail is probably the biggest drawback to the game (other than the lack of variety in gameplay). The art of The Ascent is so dense that it can be tough to figure out where you can or can't go. The city's architecture stacks on top of itself, and it can be hard to visualize and remember locations thanks to this unorthodox layout.

Sometimes it pays off, though. Like Ico and other classic 3D games, The Ascent has an amazing sense of scale and place. You'll be able to look across the cavernous city to see killing fields you just crossed. And despite mostly being in a classic PC-style isometric perspective, Neon Giant has made several areas of the city change perspectives, sometimes panning out to showcase its art. Other times, the game will switch to a side view perspective, living up to my early Contra parallel. It's never anticipated, and always welcome. This makes moving through Veles surprising and exciting, even if the job is, at its core, still just about shooting up a place.

The game is available on Xbox Game Pass, or purchasable for $30, and it's well worth the price of admission. The Ascent reminds me of the good old days of Xbox 360 and its robust indie offerings on the old Xbox Live Arcade service, where games like Shadow Complex or Super Meat Boy were not afraid of making small twists to classic formulas.

I thought a lot about other games while playing The Ascent, and this time, it's a great thing. The game has a lineage and influences. It reminds me of old times.