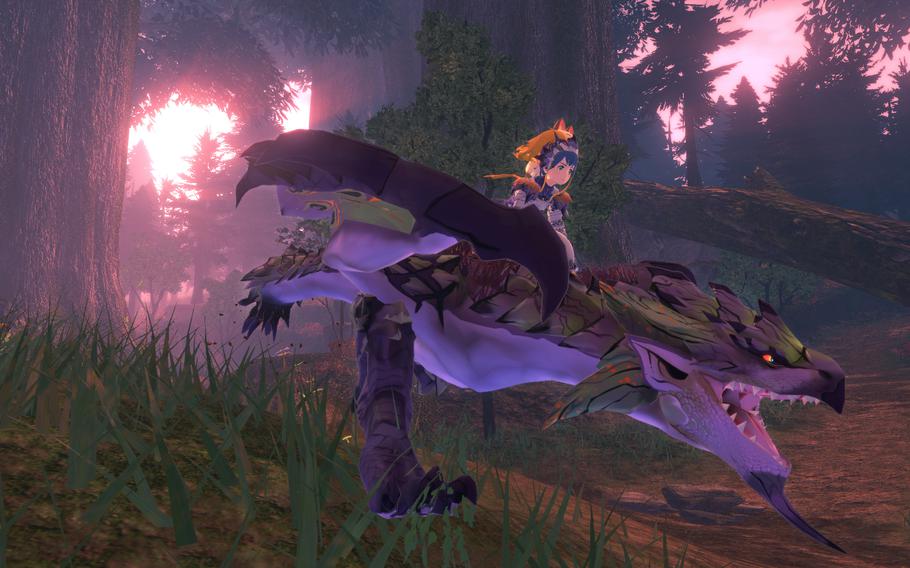 In Monster Hunter Stories 2, each monster “rider” is tasked to find unhatched eggs in various monster lairs strewn across several large maps. Fighting through each monster lair lands you one of 128 possible monsters that could join your team. You’re going to raise and nurture these monsters as if they’re your own. (Capcom)

Comparing Monster Hunter Stories to Pokémon may seem lazy and obvious, but it's also the easiest way to frame the experience for anyone who's curious.

Adjust your expectations if you play Nintendo's Pokémon series purely for the hundreds of cute designs for fictional creatures. The name of Capcom's series doesn't lie: It's all about hunting ferocious monsters, many of whom are ugly as sin. But the Stories spin off tales that deepen the game's lore while maintaining its famously playful charm.

Monster Hunter Stories 2: Wings of Ruin is a sequel to Capcom's first attempt to capture an audience that may want to try something besides Pokémon. The first game sold only 300,000 copies, a far cry from the global success of the root series. Wings of Ruin seems to be a second, earnest shot at the same idea, just on modern platforms. Whether this idea is worthwhile really depends on which factors of the "monster-catching and training" genre you love.

If you love the idea of catching and hunting different creatures, Wings of Ruin proposes a different solution than wandering the wilds and throwing balls. Instead, each monster "rider" is tasked to find unhatched eggs in various monster lairs strewn across several large maps. Fighting through each monster lair lands you one of 128 possible monsters that could join your team. You're going to raise and nurture these monsters as if they're your own. This is a far more streamlined way to find monsters, but it also removes a lot of the surprise that comes with finding that rare "shiny" Pokémon in the wild. It also means a lot of fighting your way through these funneled "dungeons" to find the egg at the end.

Fortunately, the fighting is where Monster Hunter has always shined, and Wings of Ruin is no exception. Unlike Pokémon, you fight alongside one of your monsters, and other characters in the story will fight alongside you with their own predatory pals. Every attack follows a simple rock, papers, scissors system in which speed attacks beat power types, power beats technical types, and so on. Sometimes these attacks can clash, triggering exciting animations that throw button-mashing prompts to keep you paying attention.

While you don't have direct control over your monsters (lovingly called "Monsties" in this series), each one has a set of specialties you can easily predict. The game also tells you what kind of attack your monsters will unleash next, so you can plan your own attack. Sometimes the two attacks can link up for more damage and prompt special animations that liven up the hunts. Every attack builds up a "kinship" meter, and when it fills you can ride one of your Monsties for more zesty anime-inspired scenes to punctuate your decisions. There's even another layer on top of that if your other rider party members also attained kinship, meaning all the creatures and riders form up for a singular devastating attack.

There's also a story, and it's a solid one. Wings of Ruin has winning character design and inspired art direction, especially when it comes to exploring the cultures of the Wyverians, the mysterious race of elflike beings seen in the main Hunter titles. But while there's far more dialogue and character detailing in "Stories," don't expect any elevation of role-playing storytelling. "Wings of Ruin" stays very much in its lane of kid-friendly tales about friendship and believing in yourself. It's serviceable stuff, but it's only a small cut above what we get with Pikachu and gang.

It's here where I have to admit to myself that the much of the Pokémon appeal for me has been exploring its world and the creatures designed for it. The main Monstie of Wings of Ruin is a Rathalos, the banner creature for the series in recent years. While fighting a Rathalos in Monster Hunter Rise is a genuine and challenging thrill, raising one in Wings of Ruin is a much taller ask of me. It doesn't help that a fire-breathing dragon like Rathalos can't compete for charm against even a less-popular Pokémon like a Bidoof, the adorable genetic hybrid of a beaver and a doofus.

I started to appreciate Wings of Ruin when I started to view it through the lens of Capcom's long-forgotten role-playing series Breath of Fire. That story also involved dragons and clean, colorful designs for a diverse cast of travelers. When I eventually stopped the inevitable comparisons to Pokémon, Wings of Ruin started to sing as a gorgeous and updated evocation of the simpler days of 16-bit tales.

Capcom believes in this concept, and it's hard to blame them. After all, the game maker has seen the kind of fandom furor Monster Hunter can raise. Why not extend that to children who could grow up to love the root series? When it comes to Wings of Ruin, you just really have to ask yourself whether you're in it for the furry friends or the fantastical fighting. If it's the former, the scale-clad titans of Wings of Ruin may not hit. But it's going to be a fascinating time if you've always wondered what the formula might play like if it evolved just a bit more.