Sumire: Simplicity can be deceiving

by
Christopher Byrd
• Special to The Washington Post • July 9, 2021 When I first fired up Sumire, a game about a lonely little girl living in a small Japanese town who promises to show a talking flower a beautiful day, I was less-than-enthused to see where their adventure might lead. The setup seemed so childishly unpromising that I was unwilling to spend more than 20 minutes with the game. However, when I returned to it a few days later I found that I'd misjudged it. Sumire is undoubtedly a kid-friendly game, but it is not childish. The feelings it touches on suggest the sort of wisdom an adult might look to pass on to a child to prepare her for a world that is vertiginously beautiful as well as disappointing.

The game opens with a gentle paradox: a dream that hints at fulfillment and longing. Lying asleep, Sumire, the little girl at the center of the story, envisions sheltering in her grandmother's arms beneath a wisteria tree. In the dream, she watches the happy scene as if she were an observer. Reaching out a hand as if to physically grab the moment in front of her, she wakes up and is unsettled by the thought that her recently deceased grandmother was trying to communicate something important to her which she was unable to understand.

Walking through her one-story house, she stops by the portrait of her grandmother that hangs in a cabinet near the front door. Addressing her grandmother's spirit, Sumire speaks of her mother's depression over her father's absence from their lives and asks for help. Seconds later, she hears the crashing sound of breaking glass, and when she returns to her room she discovers a broken window pane and a seed on the floor. Picking up the seed, she takes it into the living room and plants it in a pot on a table, then falls asleep.

Upon awakening, she is startled to discover that the seed has grown into a talking flower. The flower asks her to show it a beautiful day since it will only live until sunset. At first, Sumire is reluctant to do it any favors. Lost in her melancholy, she tells the flower that all she wants to do is go back to sleep and stay inside the house because her mother needs her.

But the flower is persistent. "Please. Don't just leave me here to die inside," it says before suggesting that by acceding to its request it might be possible for Sumire to see her grandmother again. Banking on that hope, Sumire snips off the head of the flower, which then floats in the air. The floating flower head will accompany her throughout her journey. Sumire then goes to fetch her backpack and notebook and sets out to try to have a "perfect day." 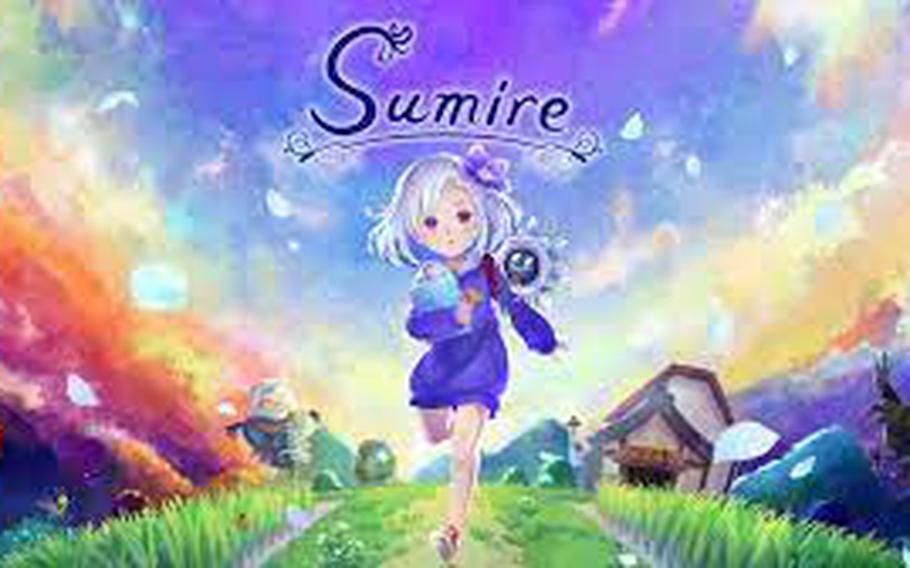 Over the length of day, Sumire will have the occasion to assist people and critters, e.g., a letter carrier who hasn't spoken with his daughter for 20 years, a lovelorn snake, etc. She'll also be forced to confront her former best friend, who dropped her to hang out with more popular girls, and to spend time in a house shunned by most of the townspeople on account of a grisly murder that took place there.

Sumire is a simple game that mostly involves walking to different places, speaking to various individuals and delivering items from one to another. The game is punctuated with a few minigames: a fantasy card game, a board game and another one which I won't go into detail about since it turns around one of the major plot points of the story - it involves Sumire being given the chance to heal or poison the hearts of her rivals. These basic gameplay mechanics are enlivened by a soft-colored, storybook aesthetic whose standout feature is the curvature of the ground that Sumire walks on, giving the impression that she is traversing a sphere where all points lead back to each other.

The idea of eternal return wends through the story. On different occasions Sumire is reminded of patterns of life that snare people, young and old, and prevent them from being able to communicate with each other. She comes to realize that everyone, including herself and her fondly remembered grandmother, has a shadow side that causes problems for those nearest to them. Themes of broken communication, missed opportunities and unrealized wishes are planted throughout her "special day."

Parents with children on the cusp of adolescence may wish to consider Sumire. Yes, it's fairly sentimental insofar as it dwells on how feelings color the world, but it's not insensible to the gaps that feelings alone can't fill.