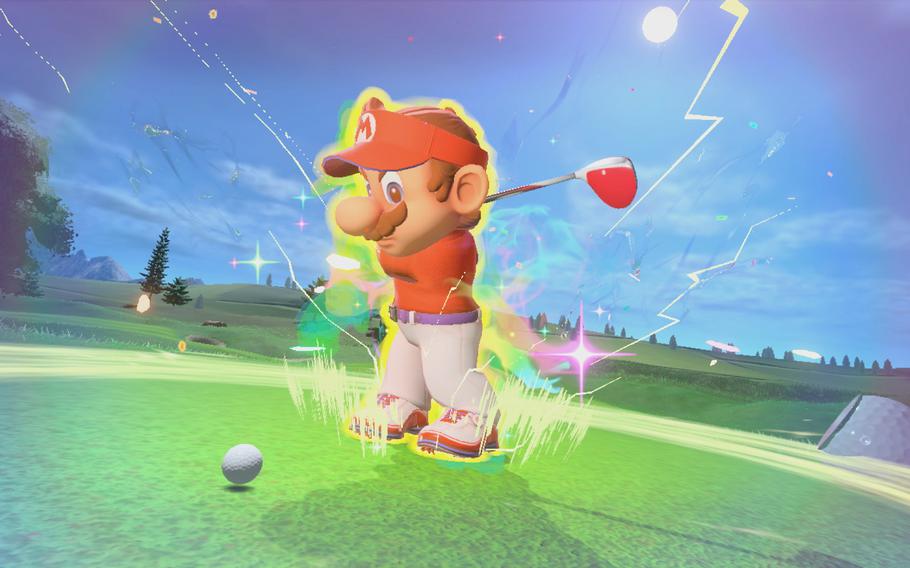 Turning on Mario Golf: Super Rush’s motion controls — which let you swing the Joy-Cons as if you were swinging a golf club — brings the game to your living room. (Nintendo)

Mario Golf: Super Rush, which came out June 25, retails for $59.99, but its small scope feels like it merits a lower price. The story mode, called Golf Adventure, took me under 20 hours to complete. The ending, which I won't spoil, hit abruptly.

The game's strength, then, is in the robustness of its core mechanics. Changing wind speeds, various terrain obstacles like Chain Chomps and Piranha Plants and large puddles of water can all ruin your golf game. You must brave those challenges to get the ball into the hole in as few strokes as possible. If you're familiar with the sport, you'll likely find something compelling in this package.

The series dates back to the late 1980s, when games were still being released on floppy disks and inserted into the Nintendo Famicom Disk System. Like in the previous games, in Super Rush you can play as Mario or any of a series of familiar faces. The game has been updated with better graphics, though in some moments, when it's raining and the character is jumping around a lot, the visuals grow blurry. There's a story mode where you complete golf challenges to defeat big bosses, as well as a regular golf mode for playing against friends or computer foes.

Mario Golf supports up to four players at a time and two people per Switch. The network play mode lets you play against people online, but in my room where the Wi-Fi signal was weak, the game got very laggy.

Learning to master Mario Golf is one of the game's most compelling challenges. When the wind is blowing at 20 miles per hour facing left, you can curve the ball powerfully to the right to counteract that. You have to watch the power gauge to nail the timing on your shot, which the narrator will confirm by exclaiming "Nice shot!" Those mechanics, which play out in just a few seconds, make the difference between an eagle (two strokes below par; which is good) and a triple bogey (three strokes above par; bad).

Turn on motion controls  — which let you swing the Joy-Cons as if you were swinging a golf club  — and the game becomes a nostalgic way to bring golf to your living room. I say nostalgic, because I grew up playing golf with my dad, who passed away from ALS in 2020 and was unable to play the sport in his final years. Golf was his passion. In his spare time, you could catch him practicing his swings with an imaginary club. In the second grade, I even made him a clay golf ball to put his pencils in. As I played Mario Golf, I couldn't help but imagine how he would've reacted to seeing a video game that's all about his favorite hobby  — with a Mario twist. As in previous Mario titles, in Super Rush, you can play as Mario or any of a series of familiar faces. (Nintendo)

My special relationship with golf elevated the sport's significance to me, and made practicing a swing feel like home. If you yearn for that feeling, motion controls scratch that itch, especially after a year plus when the putting green was not so easily accessible.

That said, Mario Golf is not exactly a one-to-one golf simulator. While in real golf, you're not allowed to interfere with other players' balls and mess up their position in respect to the hole, Mario Golf allows and encourages all manner of cheating in the form of "special moves." After charging up a gauge, characters can unleash moves like a bomb that tosses away all the balls in its radius, or Luigi's icy floor that makes balls roll away. These dirty tactics get even more aggressive in a mode called Battle Golf, which bears no resemblance to the real sport.

In the story mode, Golf Adventure, gamers play as a Mii character they customize (unfortunately playing as Mario is not an option). The plot mostly serves to introduce players to various courses, such as Bowser Highlands. It rarely thrills and is pretty simple to complete  — with one exception.

In Wildweather Woods, Toad tells the player to complete nine holes in the middle of some cliffs and wild terrain. That, coupled with a 30-minute time limit, made that portion easily the most challenging part of the game, and one of the most frustratingly fun. I breezed through the tutorial and the game's early courses; Now, I had to truly understand how to combat the elements to get my ball into the hole.

The Golf Adventure mode is littered with mysterious characters standing around that the player can talk to, but their dialogue is dull: Mostly, they share tips or express their thoughts about the weather. Gone are the creative flourishes of Super Mario Odyssey or Paper Mario: The Origami King. After speaking to a few dozen of these characters, I decided to stop talking to them unless I needed to gain their permission to enter a golf competition.

Golf Adventure's world is similarly too small. I found myself running into a black loading screen every time I walked down a path, and unlike some games which add tips or something fun to look at on the loading screen, Mario Golf just blacks out.

As with every Mario game, part of the joy comes from seeing the beloved cast of characters. Sixteen characters are unlocked right off the bat, including Mario, Pauline, Luigi, Princess Peach and Bowser; each of them has special moves, as well as happy reactions for when they perform well, and sad emotes for when they finish last.

Franchise villains Wario and Waluigi spice up the game with their klutzy, Mr. Bean-like appearances. As described in the game, Wario always makes par (just the right amount of strokes required to get the ball in the hole) in golf, which comes in handy when teaming up with the duo later on. Bowser and Mario also make appearances in the story.

Despite my history with the sport, I've never been a particularly good golfer. When the tiny ball flies away, I usually have no idea where it went  — not even taking in account if my aim was off and it went sideways. Mario Golf puts all that aside, easily giving you a way to track the ball's trajectory. In Speed Golf mode and parts of Golf Adventure, you're required to chase after the ball quickly, run into your enemies to slow them down and dodge obstacles.

Going through the game's various golf challenges also gives you a better understanding of each golf club's range and abilities. For instance, later on in Golf Adventure, you unlock the lob wedge, which is great for getting the ball out of a tough spot where it's directly facing a tall obstacle. But the lob wedge has a tendency to push the ball too far forward, so it's better to aim for a slightly shorter distance with it.

That's in contrast to when you get much closer to the hole, and use a different club, which the game nicknames the par club. The par club is pretty weak, so you'll need to overshoot it. This was all too much to grasp at the start of the game, especially as someone with a mere beginner's understanding of clubs. (I just knew the bigger the wedge, the further it could hit, and that the driver is the strongest club.) But while passing Golf Adventure's biggest challenges, I picked up this knowledge quite naturally as the game continued.

The game doesn't explicitly spell any of this out, so a lot of the fun is playing, scoring a bunch of triple bogeys and then analyzing what went wrong. In Golf Adventure, there are multiple bosses to take down. Powerful boss attacks had my character scrambling about to dodge them. Once the attack was out of the way, I counterattacked by completing quick technical challenges. That fighting pacing brought to mind Super Mario Odyssey, although that game has far better combat, graphics and overall storytelling.

Is nostalgia and love of golf enough to carry Mario Golf as a whole? It has enough just to keep players interested. During a multiplayer session with Nintendo, I got to run around in Battle Golf and Speed Golf. Much of the fun came from other people's reactions to landing bogeys or particularly clean shots. If you happen to have a gaggle of friends who love golf, this just might be the game for you. Otherwise, Mario Golf falls flat on its own.