Subnautica: Below Zero: Hold your breath and dive in 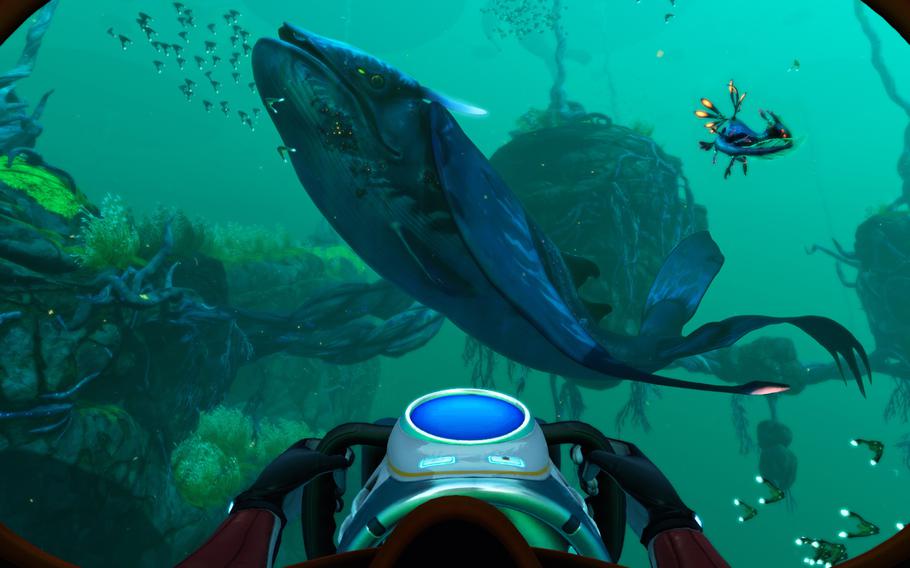 In Subnautica: Below Zero, players explore an underwater world on an alien planet. (Unknown Worlds Entertainment)

Sometimes, when I play a video game where a protagonist might drown, I'll unconsciously hold my breath until my avatar finds oxygen or dies. Maybe it's because I'm a lifelong swimmer, but situations like this make it all too easy to imagine myself in risky aquatic situations. And so it was that Subnautica: Below Zero, which largely takes place underneath an ocean, elicited no small number of panicky reactions.

The sequel to 2014's Subnautica, Subnautica: Below Zero slips players into the wet suit of Robin Ayou, a scientist who travels to an alien world to try to suss out what happened to her sister, Samantha, who worked for the ethically dubious company, Alterra. After receiving a vaguely worded notice from Alterra informing her of her sister's death, supposedly due to Samantha's "negligence," Robin takes it upon herself to investigate.

Following a rough crash landing on the surface of the planet 4546b, Robin seeks shelter in a small underwater lifepod to escape the dangerous weather conditions that regularly roil the planet's surface. The lifepod is equipped with a storage locker and a fabricator which 3-D prints tools and equipment. The fabricator also cooks fish and extracts drinkable water from them. To fashion the necessary tools that will allow her to explore the ocean's depths - like an oxygen tank and flippers - Robin must scour her surroundings for minable resources: titanium, copper, quartz, etc. She must also keep an eye out for wreckage or equipment left by previous explorers. Using a hand tool, she can scan items to acquire blueprints for the fabricator. The more useful the item, the more difficult it is to collect resources for it.

Early resource-gathering expeditions in the game typically don't require players to venture very far from the lifepod. However, as Robin's mission continues, she has to travel farther afield to acquire the stuff she needs to brave more treacherous areas. Before she can build and upgrade a Seatruck to explore the ocean without constantly having to retreat to the surface to replenish her oxygen, she'll have to take risky dives to acquire rarer resources. Rubies, for example, are located hundreds of meters down, often in places where simply animated and far-from-frightening predatory creatures lurk.

My favorite parts of Subnautica: Below Zero were those which sparked anxiety. It's easy to become disoriented exploring the game's numerous underwater caverns. Finding a longed-for resource and then losing it on account of running out of oxygen before Robin can replenish her tank is the sort of exquisite pain the game offers, and bumping Robin's head on a ceiling where I expected open water provoked a sharp, fleeting sense of dread. Curiously, the way Below Zero oscillates from long restive stretches between points of interest to short bursts of perilous activity absorbed my attention in ways many more-frenzied popular horror games don't. Progression in the game on its default Survival mode is built on a series of tiny victories like crafting an item or finding a difficult-to-locate place. With regard to the latter point, I certainly consider Below Zero to be what I call an "internet game" because so few clues are given to the whereabouts of certain spots. So, unless you have a great deal of patience for combing through terrain for hours, you'll definitely want to avail yourself of online resources.

When I started playing Below Zero I was initially put off by the need to track resources back and forth while also making sure Robin doesn't die from dehydration or hunger. Fortunately, the developers were farsighted enough to include "Freedom" mode which eliminates the need for food and water; there is also a "Hardcore" mode where Robin only has one life and a "Creative" mode that cuts out the story and eliminates the need to Hoover-up resources, find blueprints, or worry about oxygen and hunger. In hindsight, I wish I had chosen Freedom mode because I found having to keep Robin fed and hydrated a tedious affair in a game already heavily dependent on resource management.

Subnautica: Below Zero's conventional sci-fi story line, which revolves around a greedy corporation looking to get ahead in the weapons business, never raised my interest. But the painstaking effort it takes to get Robin from one minor narrative point of interest to another made me appreciate its small, very human scale of success.