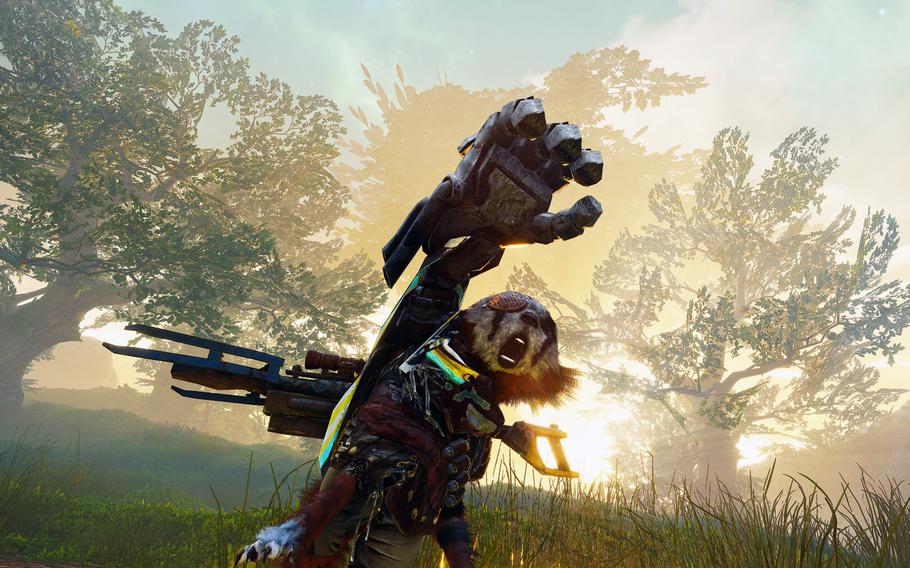 Biomutant is a third-person, open-world game in which the player controls a mammalian warrior in a world filled with mutated animals. (Experiment 101)

If you can believe it, biodiversity and mutation are at the core of the narrative and mechanics of Biomutant. That’s not always a strength. The game’s weird, Frankenstein design cobbles together so many elements owed to its contemporaries that the game often feels like less than the sum of its parts.

Right off the bat, Biomutant provides a huge swath of customization options. For your player character, you can select different breeds that have advantages in certain stats, and that establishes your baseline look. The Hyla, for example, is a hyena-based species that focuses more on defense; it has a slight advantage in the Armor stat. The Fip breed is nerdy-looking with buck teeth, and is more naturally inclined toward Psionic powers; it can recover energy faster for its mind-based attacks.

On top of that, you can also select better stats that in turn mutate your character. Putting more focus into Vitality causes your player character to have a much bigger head, whereas specializing in Agility gives you longer legs. The customization here is pretty impressive and truly lives up to the game’s title.

The world is a post-apocalyptic one, the result of corporate greed by a toxic chemical company in the “old world.” Anthropomorphic animals -- such as your character -- roam the earth. It’s a truly beautiful world that attempts to world-build by calling old contraptions, like washing machines and toilets, silly names like “clothes-soakers” and “flush-stools,” respectively. These naming conventions that the world’s inhabitants come up with add quite a bit of charm to the world and its overall cartoonish tone.

Biomutant borrows many mechanics from its contemporaries. Scavenging a once populated city’s ruins reminds me of looking for materials in The Last of Us Part II. The open-world exploration is very reminiscent of Days Gone and modern Assassin’s Creed games, where you can pretty much explore to your heart’s content as you stumble across a world riddled with camps and side quests.

Of course, the biggest elephant in the room is how much it reminds of Legend of Zelda: Breath of the Wild. The overall goal of Biomutant is to take down four giant monsters called the World Eaters and restore the Tree of Life. Sound familiar? You even get a glider. With how open the world is, you can set your own pace: either beelining the critical path to the World Eaters or just taking it slow to discover all the different characters the world has to offer.

Biomutant even has a morality system of Light and Dark, incredibly similar to the Paragon and Renegade dynamic in Mass Effect. The choices you make throughout the game can change how other characters interact with you. If you chose to execute an NPC rather than work with them, that could have ripple effects.

It may seem unfair to judge Biomutant to the standards of games that have garnered “Game of the Year” praise and accolades, but the way these mechanics are implemented here are so obvious and stick out. It’s not a bad thing and these mechanics are competent enough, but if you’ve played any of the games previously mentioned, it’s incredibly hard not to notice it. However, I am impressed that Experiment 101, a studio that seemingly has fewer than 30 employees, created such an expansive world.

Biomutant offers many different kinds of weapons, including melee varieties like one-handed and two-handed swords, and crushing hammer weapons, as well as ranged ones such as pistols and rifles. You’ll come across different parts that you can combine together to create new weapons, as well. The loot you find can almost be overwhelming at times. It’s great that Biomutant offers so much choice in how you customize your character, gear and approach.

The biggest problem with Biomutant is the minute to minute combat. Most attacks feel absolutely weightless. There’s no impact behind the swing of the sword. Enemies can feel like damage sponges, especially the bigger ones. When you hit them, they don’t seem to stagger; in fact, they usually end up finishing their attack animations anyway and knocking you off your feet. You can parry attacks by blocking at the right moment, but it always feels slightly off, and the window of opportunity isn’t very forgiving. I was left wishing the combat mechanics were closer to Ghost of Tsushima, which were very well refined. It’s not a good sign to walk away from one game wishing you had played another.

You can level up to earn upgrade points and unlock special combo attacks and abilities to perform during battle, such as spewing toxic waste that forces your enemy to fight against their own comrades, or leaving a trail of fire when you dash toward an enemy. Triggering special combo attacks feels like a Devil May Cry game. For example, sometimes you’ll need to double jump into the air and then shoot to activate a combo attack, or finish an attack chain and then press another button to execute a combo finisher.

The gameplay attempts to be flashy, much like the aforementioned Devil May Cry games. But without any of the “oomph” behind your attacks, it feels shallow and it’s just not fun to engage in combat encounters. Additionally, there doesn’t seem to be any sort of manual targeting mechanic as far I could tell. So fighting multiple enemies at a time, which you will often do, feels like a chore if you’re trying to focus on taking out enemies one by one.

It’s such a shame that the combat feels so undercooked because the rest of the game is decent, or sometimes great, such as with the environmental design. I’ll often come across a cool new area but then roll my eyes when I get into a fight. I really do enjoy exploring what the open world has to offer and listening to the soft soundtrack while learning more about the characters through their side quests.

The developers did mention that there is a Day 1 patch coming, so hopefully that will fix certain issues, such as clipping through the bottom of the terrain or graphical issues, both of which I’ve experienced. I’m not expecting the patch to provide an overhaul to the combat, however.

Biomutant is a weird amalgamation of many standard video game mechanics, almost in a meta kind of sense, just like an actual mutant. There are so many borrowed ideas that you’re bound to find something you like about this game. There’s a lot of customization to personally tailor your own preferences, and that’s the beauty of it. It’s got a lot of charm and personality too. If only the combat’s feel had just been fine tuned to feel more impactful, then the overall experience could have been that much better.