Brendan Fraser is back. But to him, ‘I've just never been that far away’ 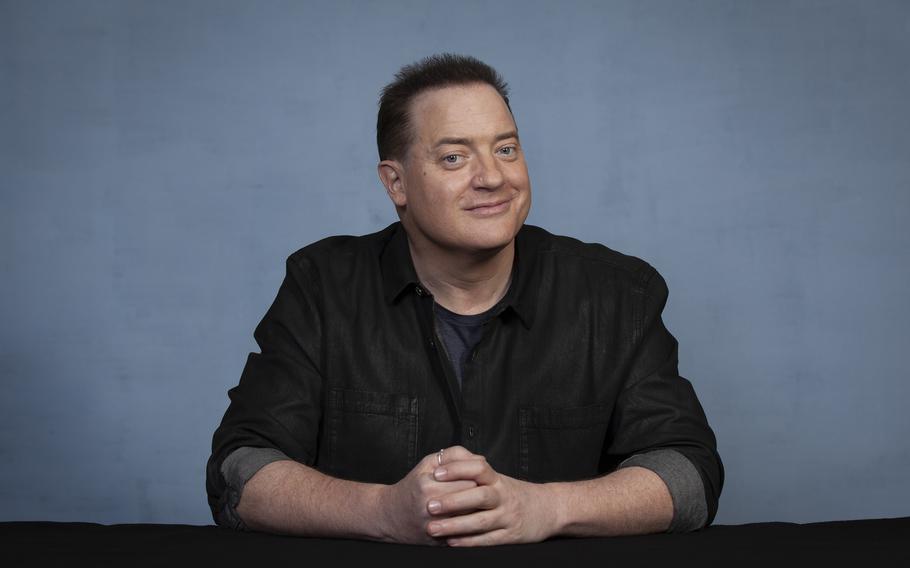 Brendan Fraser poses for a portrait in Los Angeles on Nov. 18 to promote his film “The Whale.”  (Rebecca Cabage, Invision/AP)

NEW YORK — In a darkened hotel room in New York's Soho neighborhood, Brendan Fraser kindly greets a reporter with an open plastic bag in his hand. "Would you like a gummy bear?"

Fraser, the 54-year-old actor, is in many ways an extremely familiar face to encounter. Here is the once ubiquitous '90s presence and action star of "The Mummy" and "George of the Jungle," whose warm, earnest disposition has made him beloved, still, many years later.

But Fraser, little seen on the big screen for much of the last decade, is also not quite as you might remember him. His voice is softer. He's more sensitive, almost intensely so. He seems to bear some bruises from an up-and-down life. If Fraser seems both as he was once was but also someone markedly different, that's appropriate. In Darren Aronofsky's "The Whale," he gives a performance unlike any he's given before. And it may well win him an Academy Award.

Fraser's performance been hailed as his comeback — a word, he says, that "doesn't hurt my feelings." But it's not the one he'd choose.

"If anything, this is a reintroduction more than a comeback," Fraser says. "It's an opportunity to reintroduce myself to an industry, who I do not believe forgot me as is being perpetrated. I've just never been that far away."

Fraser is very close at hand, indeed, in "The Whale." In the adaptation of Samuel D. Hunter's play, which A24 releases in theaters Friday, Fraser is in virtually every scene. He plays a reclusive, obese English teacher named Charlie whose overeating stems from past trauma. As health woes shrink the time he has left, the 600-pound Charlie struggles to reacquaint himself to his estranged daughter (Sadie Sink). 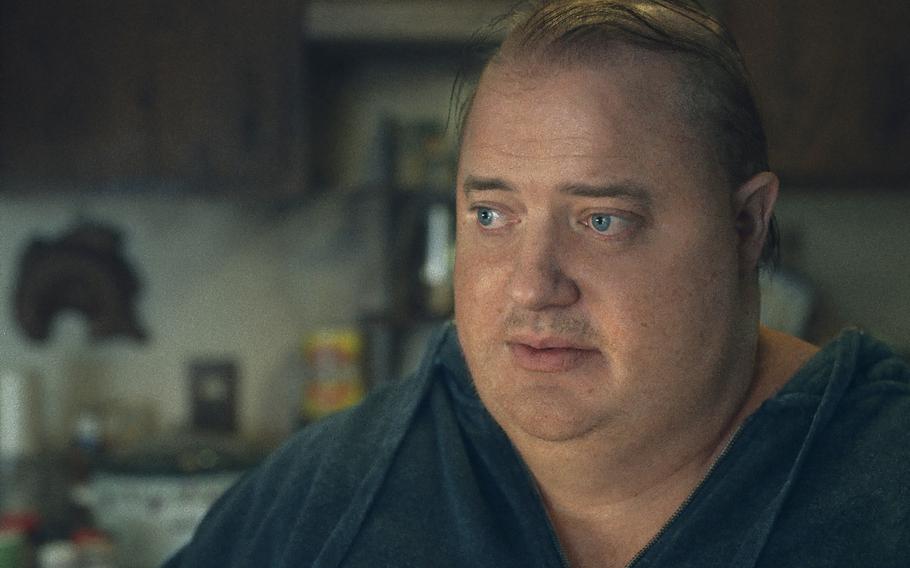 Brendan Fraser appears in a scene from “The Whale.” For the film, in which he plays a reclusive, 600-pound English teacher, Fraser wore a massive body suit and prosthetics.  (A24/AP)

Fraser's performance, widely celebrated since the film's Venice Film Festival premiere, has two Oscar-friendly traits going it for: A comeback narrative and a physical metamorphosis. For the role, Fraser wore a massive body suit and prosthetics crafted by makeup artist Adrian Morot that required hours in makeup each morning.

But regardless of all the role's transformation trappings, Fraser's performance resides in his sad, soulful eyes and compassionate interactions with the characters that come in and out of his home. (Hong Chau plays a friend and nurse.) It adds up to Fraser's most empathetic performance, one that has returned him to the spotlight after years making quickly forgotten films like "Hair Brained" (2013) and the straight-to-DVD "Breakout" (2013). On stages now from London to Toronto, standing ovations have trailed Fraser — a leading man reborn — wherever he goes.

For Fraser, who spent much of his previous heyday in Hollywood swinging on vines and racing through pyramids, playing Charlie in "The Whale" has a cosmic symmetry. He could identify with him, Fraser says, "in ways that might surprise you." When he was in his late 20s trying to be as fit as he could be for "George of the Jungle," Fraser encountered his own body-image issues.

Some have questioned whether Fraser's role in "The Whale" ought to have gone to someone who was authentically heavy. But Fraser, who collaborated with the Obesity Action Coalition in building the performance, says he intimately understands a different kind of appearance-based judgment.

"The term was 'himbo,'" he says. "I wasn't sure if I appreciated it or not. I know that's bimbo, which is a derogatory term, except it's a dude. It just left me with a feeling of profound insecurity. What do I have to do to please you?"

"It didn't matter, really, because life took over. I did other things. I now arrive at a place where I see the flip side of the coin."

After seeing the play 10 years ago at Playwrights Horizon, Aronofsky, the director of "Pi," "Requiem for a Dream" and "Black Swan," spent years contemplating different actors who could play the protagonist of "The Whale" without any success. Then he had Fraser come in and read for the part.

"It wasn't like I went into this with a calculation: Oh, a forgotten American-Canadian treasure," Aronofsky says. "He was the right guy for the right role at the right time. If anything, I was wondering would people think it was a silly choice or something. There wasn't any cool factor that I could see."

Aronofsky instead depended on his gut and an old axiom: "Once a movie star, always a movie star." Plus, Fraser was hungry. He wanted the part desperately and was ready to put in all the work, all the time in the makeup chair. Still, Aronofsky would later marvel, watching a clip reel of Fraser at an awards ceremony, at the juxtaposition of "The Whale" with movies like "Encino Man," "Bedazzled" and "Airheads."

"He plays this kind of very present, truthful, innocent, goofus kind of guy," Aronofsky says. "Then you intercut it with 'The Whale.' It was kind of jaw-dropping to me that this was one human being. There's a gap in between of a lot of years."

Fraser never stopped working, but his movie star days mostly dried up in the years after his 2008 films "The Mummy: Tomb of the Dragon Emperor" and the 3D "Journey to the Center of the Earth." Around that time, he and his wife, Afton Smith, with whom he has three sons, divorced.

"I took some personal time. It was important," Fraser says. "Mostly connecting with my life as a father. It gave me an appreciation for my capacity to love. What I learned informs the latter half of my professional life now."

"Now I know my purpose. Take everything I've learned. Own it. And, if possible, let if fuel the work that comes before me," Fraser adds. "It's a nice idea, but what work will come before me?"

At a Beverly Hills, Calif., luncheon in 2003, Fraser was groped by Hollywood Foreign Press Association member Philip Berk, Fraser said in 2018. (Berk disputed Fraser's account.) The experience, Fraser told GQ, made him feel like "something had been taken away from me" and "made me retreat."

Last month, Fraser announced he won't attend the Golden Globes in January, whether he's nominated or not.

"My mother didn't raise a hypocrite," Fraser said. Still, the nature of awards campaigns will likely keep Fraser in the public eye through the Oscars in March.

Is he at all trepidatious about being back in the spotlight?

"I think it's going to be for the rest of my career," Fraser replies. "No. I have an obligation to do this. I feel duty bound to, as politely as I can, to use that casual prejudice to describe this character, to remind them that there's a better way of doing that. Obesity is the last domain of accepted, casual bigotry that we still abide."

During shooting on a sound stage in Newburgh, N.Y, Chau was often impressed by how Fraser worked steadily with a hundred pounds of cumbersome prosthetics on him and crew members buzzing around him before every take.

"I just thought Brendan was such an angel and so gracious in the way he managed that and compartmentalized all that was going on around him," Chau says. "I naturally felt like taking care of him on set. Making sure his water bottle was someplace close by. Holding his hand and making sure he got up off the couch OK."

Little about the film, or Fraser's journey with it, was inevitable. His first meeting with Aronofsky was in February 2020. The pandemic nearly led to the production's cancellation.

"I gave it everything I had every day," he says. "We lived under existential threat of COVID. An actor's job is to approach everything like it's the first time. I did but also as if it might be the last time."

Instead, Fraser's performance opened an entire new chapter for him as an actor. He recently shot a supporting role in Martin Scorsese's upcoming "Killers of the Flower Moon." Pondering what comes next, though, will have to wait until another day. When the time for the interview is through, Fraser stands up and graciously pulls a bag out of his pocket.

"Gummy bear for the road?" Fraser asks. "I recommend pineapple."