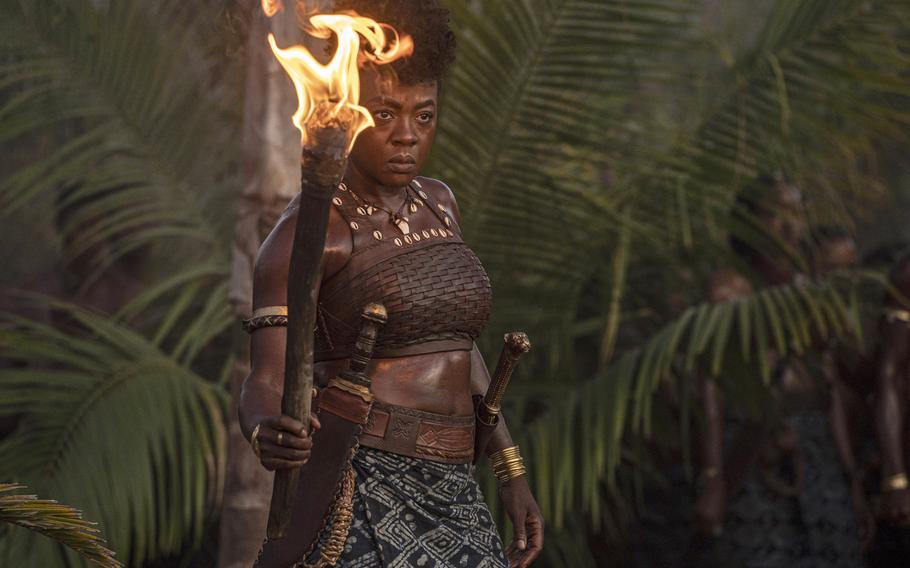 To play a grizzled army general in “The Woman King,” Viola Davis spent months putting her body “through hell.” It was all a part of her training to become a member of the Agojie - the real-life, elite, all-female attack unit that defended the Dahomey kingdom of West Africa (now Benin).

An actor’s physical metamorphosis will never not be fascinating. While the bodily limits they push past are often taken as tangible evidence of their talent and commitment to the craft, what the audience can’t measure is the mental preparation - the invisible athletics that steel an actor for what’s coming.

Dead lifts are hard and all, but what really got Davis ready for a fight was a book.

“I had to always prepare myself before I turned the page,” the Oscar winner said in a recent interview with The Washington Post about the emotional push-ups necessary to crack open “Amazons of Black Sparta,” which the film’s production used as one of its historical reference guides. One of few official reports on Dahomey’s female warriors, the book chronicles the accounts of early 19th- and 20th-century European ethnographers and therefore comes with all the associated racial baggage.

“We were referred to as bestial. And ugly. And overly masculine,” said Davis, leaving enough space between each adjective to let gravity pull them down. They were like extra weight added to the load the actress has been carrying around since she was a young girl growing up Black and poor in Rhode Island, and as an actress trying to break into Hollywood decades later.

With “The Woman King,” starring Davis as the fictional military mastermind Nanisca, the actress is flexing her muscle.

“This is my response. You will see a deeper side of femininity and womanhood in Nanisca and Nawi and Izogie and Amenza,” added said Davis, ticking off the film’s four main characters.

The actress called the role of Nanisca - a no-nonsense fighter who at one point tells her army of women that it’s better to slit their throats than be captured by men and slave traders - the most transformational of her career. But even though the four hours of martial arts five days a week was obviously grueling for the 57-year-old, the real transformation, Davis said, was about frame of mind.

“I had to tap into my warrior spirit,” she said.

One of the very first scenes in the film is a fight between the Agojie and the male troops of a different nation. Nanisca and her elite squad emerge from the cover of tall grass slick with palm oil, machetes and fingernails sharpened to killing points. There is zero hesitation when the general gives the go-ahead. The other guys never stand a chance.

Diving headfirst into the fray was not Davis’s “natural inclination.” When confronted with a 250-pound man coming at her with a sword, her actual fight-or-flight response leaned heavily on self-preservation. Whose wouldn’t? But like her character says in the movie, “A warrior must kill her tears.”

“My thing was just to be fearful and also to believe that I have nothing within myself to fight this huge human being because I’m a girl,” Davis said of the woman she was before filming began. “But I had to get over that.”

Nanisca’s bravery wasn’t something Davis could put down when director Gina Prince-Bythewood called cut. And what’s more, the actress didn’t want to.

“There was something about [that fear] that made me think how often I abandon huge challenges because I feel that I don’t have the weaponry to overcome it. How many obstacles I put in my path before I even step into the challenge. How often people have told me my womanhood and my Blackness has been more of a hindrance than an elixir,” Davis said.

The more battle scenes she did, the more comfortable she got with her own fearlessness.

“The more I had to wield my sword, I felt like I was wielding my inner sword. There’s a pride that I took in that,” she said.

And while Davis made it a point to emphasize that she herself is not a violent person, she noted that there is more to combat than brutality.

“It certainly became a great metaphoric challenge for me as a Black woman,” she said.

In fact, the entire process of getting “The Woman King” to screen was a six-year battle. First, it was casting. Davis, whose company JuVee Productions helped make the film, wanted actresses who weren’t major stars - yet. Nanisca’s trusted captains Izogie and Amenza are played by Lashana Lynch (last seen in “Doctor Strange in the Multiverse of Madness”) and Sheila Atim (“Bruised”), respectively. The Agojie’s newest recruit and wavemaker is Nawi (Thuso Mbedu). There was pushback from the studio. “Everyone was a fight,” Davis said.

Next came more of those infamous Hollywood “notes.” Was there some way a man could have a central role, preferably a White man? Then Davis had to lobby hard for a “proper budget.” (The epic African story ended up costing $50 million to make.)

“Life is a fight,” Davis said, “only made better by the people who are willing to do it.”

“Every character that you get to play changes you, shifts you, teaches you a little bit of something about life,” Davis said. “There are characters you never want to visit again but then there’s others that really do make you better.”

She taken to calling “The Woman King” her “magnum opus,” the culmination of decades of work on and off camera, lifting weights seen and unseen.

“It’s sort of my big epic eff you, but at the same time an invite: that if we are dedicated to being inclusive and we’re dedicated to diversity, then this is what it should look like,” Davis said. “I want people to see us like we’ve never been seen before, but how we are. Because I don’t think that people see us.”

The weight of representation is heavy, Davis said. “It’s an 800-pound gorilla on all of our backs as African Americans.” But she decided to shoulder the responsibility of taking ownership of stories that would otherwise go untold and providing opportunities for actresses who would otherwise be overlooked - “especially dark-skinned actresses, because colorism cannot be spoken about enough.”

If it all sounds like too much, like a burden that could threaten to weigh an artist down, Davis doesn’t think so. Getting older, the actress said, has offered her freedom. Looking at the scope of her career, Davis wants to go bigger, bolder, have more impact.

“I want to leave something behind for other actors like Miss [Cicely] Tyson did for me,” she said. “Within this movie is a story. And the story is wanting the matter. And the story is also about sisterhood. And it’s about tapping into your warrior spirit as women. That it’s not a history lesson. It’s a story.”

Now comes the inevitable deep question after an actor tees up that kind of broad vision for what amounts to their life’s work: What’s next? Her answer is just as all-encompassing.