‘Barbarian’ brings bonkers horror back with an Airbnb nightmare 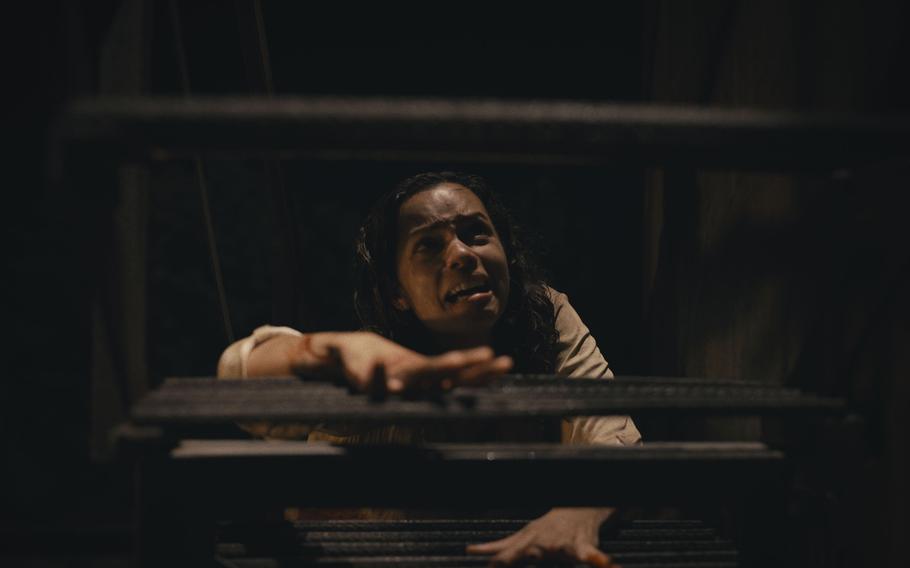 In the new horror film “Barbarian,” Tess (Georgina Campbell) arrives at her Airbnb one dark and stormy night only to find a strange man already in the house, claiming to be its rightful renter.

What’s a girl to do with a double-booking dilemma, an inviting stranger and nowhere else to go? Will fate swing this arguably alarming meet-cute into classic rom-com territory? (The recent Netflix romance “Love in the Villa,” coincidentally, shares the same setup ... with very different results.)

Alas, Tess’ nightmare begins the moment she steps inside, lets her guard down and shares a bottle of wine with the handsome but sketchy Keith (“It” star Bill Skarsgard, minus the Pennywise makeup) in writer-director Zach Cregger’s delightfully twisted foray into horror. Now in theaters, “Barbarian” is a raucous descent with multiple surprises best left unspoiled — but they do involve a creepy basement and monstrous secrets deep beneath the surface.

Best known as an actor and co-founder of the sketch comedy troupe The Whitest Kids U’ Know, Cregger expertly orchestrates the fright ride of the season, citing cinematic inspirations from Takashi Miike’s “Audition” to Sam Raimi’s “Evil Dead 2” and “Drag Me to Hell.” Yet the chilling tale was sparked by an Oprah-endorsed source — Gavin de Becker’s nonfiction bestseller “The Gift of Fear: Survival Signals That Protect Us From Violence” — which cautions women to heed the micro-red flags from men that they subconsciously clock in day-to-day interactions.

An unwanted touch. Unsolicited sexual remarks. Favors that were never asked for.

“I was struck by the fact that this is not part of my day-to-day thought process because as a man, I don’t have to be on guard against half the population who might have some sort of ill intent towards me,” said Cregger. “That’s my privilege. I think I knew it intellectually, but it was the first time that I really dwelled on it.”

Tess already has a lot on her plate and a toxic relationship in her rearview when she arrives at her Airbnb in a rundown Detroit neighborhood (filmed on location and in immersive sets built in Bulgaria) the night before an important job interview.

“She’s at this crossroads in her life where she’s looking at this new job, this new start, and this could be the moment that she manages to change everything — perhaps get away from this toxic pattern that she’s put herself through again and again and again,” said Campbell, who brings a cautious intelligence to her “Barbarian” character. “You can tell that she feels like she doesn’t have much agency or ability to remove herself from these bad situations.”

The script’s wild twists and turns also hooked Campbell, who landed on Cregger’s radar after starring in the “Hang the DJ” episode of “Black Mirror” and gives a breakout performance in “Barbarian.” “I loved everything that it was doing,” said the British actor. “Horror is a really great genre for up-and-coming actors — the genre is what’s selling. But it’s very rare that horror films have a good story attached to them. I’m so glad it managed to come my way.”

The film began as a writing exercise in Cregger’s home laundry room/office, where he works, takes Zoom calls, and has lately been painting colorful studies of fruit to unwind. Video chatting ahead of the film’s release from the same desk where he penned “Barbarian,” he held up a sheet filled with vibrant paintings of apples. “It’s a meditative, silly little fun thing for me to do that no one will ever judge.”

Although known for his work in comedy, Cregger is a voracious student of horror movies and had always gravitated toward the dark. At first the exercise, like his apples, was just for him, not to submit for anyone else’s approval — “a little scene that would just be spooky, for nobody” — as he challenged himself to write a scenario packed with as many red flags as possible that a man might not notice, but a woman might find unnerving.

The story flew along organically without an outline or intended end, Cregger subverting clichés with his knowledge of horror conventions and crafting a heroine savvier than the average final girl. When he got bored, he took wide turns to keep himself amused. A basement with a secret door. A hidden room with a camera. At one point, he added the character of AJ, a Hollywood sitcom actor whose introduction marks one of “Barbarian” surprising shifts.

“I thought, what’s the opposite of [Tess]? A man who has no awareness,” said Cregger. “A man who is completely oblivious to the damage that he’s been inflicting on people. I wanted them both to pass through the same prism.” 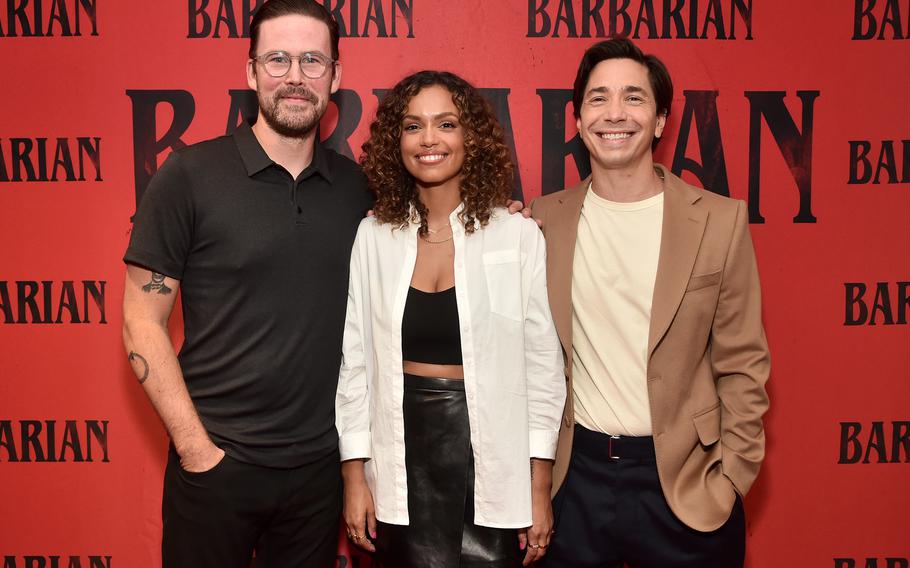 It wasn’t the kind of character that Justin Long (“Galaxy Quest,” “He’s Just Not That Into You”) is often considered for. At first Cregger was looking to cast someone more conventionally alpha and — “you can say it — hunky,” the actor jokes. But it was also a guy he knew all too well. “I’ve spent a lot of time in L.A. and in this industry, so unfortunately you cross paths with a lot of AJs,” said Long.

He also took inspiration from one of his own personal obsessions — the ABC reality dating shows “The Bachelor” and “The Bachelorette” — channeling its male contestants to imbue AJ with an insidious edge beneath his nice-guy veneer.

Many “Bachelorette” contestants, Long argues, exhibit toxic behavior for which they do not take accountability. “And then they go on the Men Tell All, they’ve had months to read everything online and rehearse an apology. These guys now are kind of appropriating apologies that are actually accountable, but it’s performative still.”

“What’s fascinating is the way a lot of the guys perform,” said Long. “I thought that was an interesting thing to explore with somebody like AJ who is so untethered, such a narcissist and depending on who he’s around, behaves differently. ... I remember reading [the ‘Barbarian’ script] and thinking, [Cregger] is somebody who understands toxic behavior, because you have really know that kind of behavior to write that.”

There were many times when “Barbarian,” now one of the best-reviewed horror movies of the year, almost didn’t make it to the screen.

Cregger co-directed two previous comedy features, sharing helming duties on 2009’s “Miss March” and 2011’s “The Civil War on Drugs” with his Whitest Kids U’ Know sketch partner Trevor Moore. The former’s critical and commercial failure had Cregger believing he was stuck in movie jail. “I convinced myself that that door was closed for me, and it took me a long time to even start writing again,” he said.

By the time the “Barbarian” script was done, Cregger was determined to get it made. But after taking it out to every company in town, he says, the notes he got were about changing all the unconventional choices in structure and character that he loved. It would take two years to find the partners who believed in his vision.

Eventually genre producers Raphael Margules and J.D. Lifshitz and their BoulderLight Pictures came aboard, in turn bringing in “The Ring” and “It” producer Roy Lee of Vertigo Entertainment. Actors were cast, preproduction was underway and Cregger was set to fly to Bulgaria when their independent financier tragically died, he says.

Over the course of a weekend, “Barbarian” suddenly fell apart. Crew members were let go. Cregger thought his last chance at a directing career had evaporated. Then Lee made a call to Arnon Milchan’s New Regency, which has a deal with Disney through 20th Century, who financed and rescued the film. The movie was back on.

With only two days to film exteriors on location in Detroit, “Barbarian” production designer Rossitsa Bakeva and a largely Bulgarian crew built an entire residential neighborhood of 13 home facades from scratch. The interior sets, where Tess, Keith and AJ descend from generic West Elm domesticity into hellish pitch-black tunnels, photographed with shadowy precision by director of photography Zach Kuperstein, allowed the actors to immerse themselves in the nightmare of “Barbarian.”

“The way that we shot it, we’d be in there with a camera guy, sound guys, everyone, and we were lighting scenes with either a [flashlight] or a phone,” said Campbell with a laugh. “It was kind of crazy.”

Especially after watching it with vocal audiences shrieking, yelling and squirming at the screen, she says, she loves its idiosyncrasies “and the fact that it is absolutely bonkers.”

“Everyone that was there when we were making it, everybody got it. Everyone thought it was the best thing ever. But we didn’t know when we were making it if that would translate, if people would get it, if people would think it was too weird,” she said. “At the end of the day, it’s just a really fun film. It’s crazy, it’s weird. It’s different. I think it’s exactly what you need from a horror film.”