Location brings ‘Where the Crawdads Sing’ to life 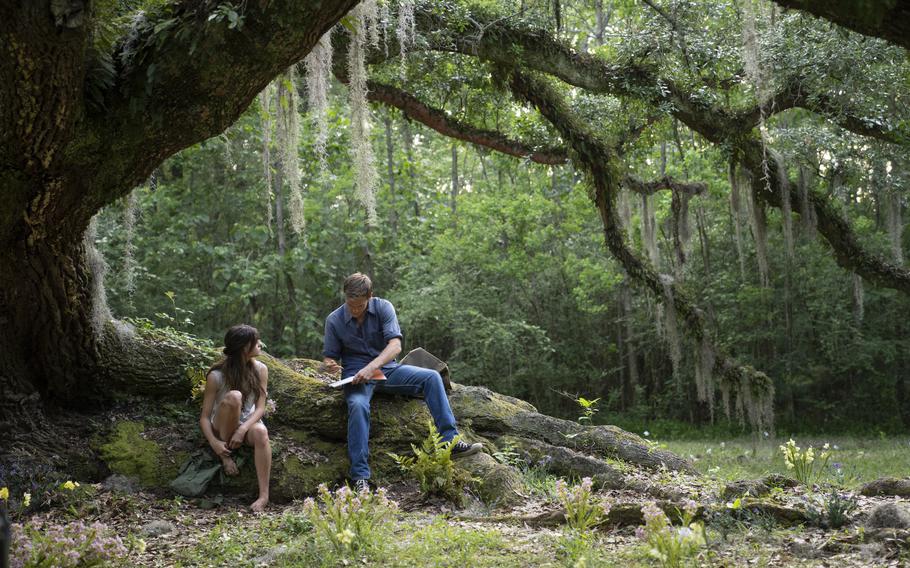 This image released by Columbia Pictures shows Daisy Edgar-Jones, left, and Taylor John Smith in a scene from “Where the Crawdads Sing.” (Sony Pictures/AP)

The coastal marshlands of North Carolina take on a mythic quality in Delia Owens’ “Where the Crawdads Sing.” They are where the protagonist, Kya, grows up alone after her family leaves. They are also both the source of her artistic inspiration and her social isolation from the people in the nearby town of Barkley Cove.

“Marsh is not a swamp,” Owens’ book begins. “Marsh is a space of light, where grass grows in water, and water flows into the sky. Slow-moving creeks wander, carrying the orb of the sun with them to the sea, and long-legged birds lift with unexpected grace-as though not built to fly-against the roar of a thousand snow geese.” 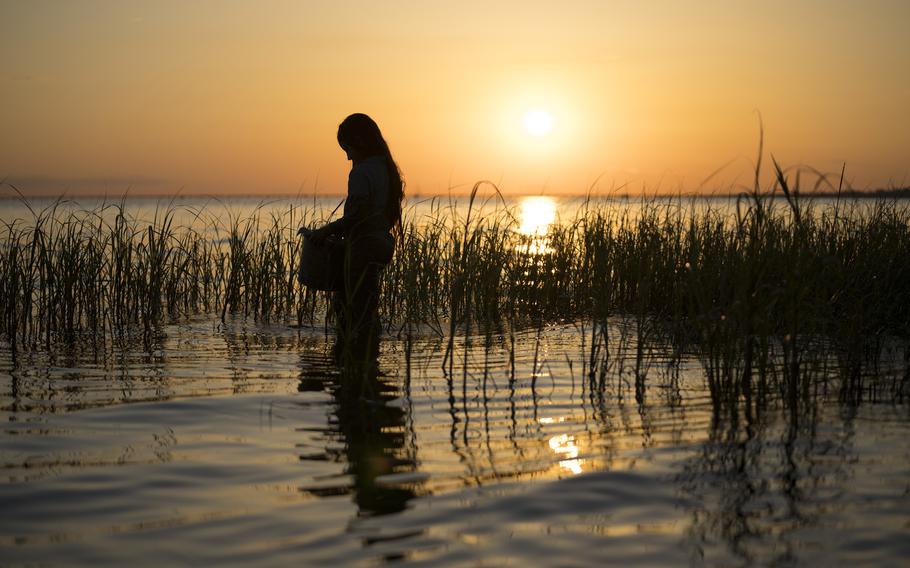 “Where the Crawdads Sing,” based on a bestselling novel, is now playing at many AAFES theaters. (Sony Pictures)

It is a character as important as any in the book, and the filmmakers behind the big screen adaptation, which opens in theaters nationwide Friday, were not going to take any chances recreating that environment on a soundstage. They too would take to the marsh — oppressive heat, swarming bugs, looming alligators, unpredictable weather, flash floods, lightning storms and all — to bring the story to life. New Orleans plays coastal North Carolina in the film.

Reese Witherspoon and producer Elizabeth Gabler (“Life of Pi,” “Hidden Figures”) were both early champions of “Where the Crawdads Sing,” which became an unlikely publishing phenomenon, with over 12 million copies sold and a record-breaking 191 weeks on the bestseller list. They set out to make a feature film and enlisted Oscar-nominated “Beasts of the Southern Wild” screenwriter Lucy Alibar to take a stab at adapting the lyrical novel, which is at turns a romance, a coming-of-age tale, a courtroom drama, a mystery and a celebration of the natural world.

Director Olivia Newman had already decided she had to avoid the book when she heard there was an adaptation in the works. She wanted to preemptively spare herself the heartbreak of not getting to direct it herself. Then her agent told her that they were still searching for a director. She read it in two days, put a pitch together, and with an image of Terence Malick’s “The New World” in her head, she landed the dream job.

“We really wanted it to feel timeless,” Newman said. “Even though the book is really grounded in a specific time and place in American history that was so important for us to capture authentically, the story of “the marsh girl” also felt to me like a bit of folklore.”

The story follows “the marsh girl” Kya from age 6, when her mother leaves suddenly and her siblings and father go soon after, to her teen years through adulthood, capturing her evolution as an artist and several romances. Her freedom and future are put into jeopardy when one of her suitors is found dead and she’s assumed to be the cause. Daisy Edgar-Jones, the English actor who broke out as Marianne in “Normal People,” was cast to play Kya.

“I feel very lucky that I’ve been able to play women that are real and complicated,” Edgar-Jones said. “Kya and Marianne aren’t just one thing. They are both vulnerable and kind people, but they’re also incredibly spiky at times and flawed in many ways as well.”

Edgar-Jones immersed herself in Kya’s world which required her to adopt a mid-century Carolina accent, learn how to navigate a boat through the marsh and often be barefoot outdoors, which was mostly fine save for the red ants everywhere. Upon arriving in New Orleans, she found herself transported by the environment and its natural beauty and wildness. One of her fondest memories, she said, was the first time she saw the shack that production built in a nearby state park for Kya’s house.

“It felt like it was really lifted from my imagination,” Edgar-Jones said.

Filming was scheduled to catch the spring greenery before the rains came. They planned to shoot exteriors in May and interiors in June, but nature had other plans. A record May rainfall had the production constantly having to rearrange, sometimes on the spot, when there were sudden lightning storms. There were also unique challenges in shooting a good portion of the film on water, which had the entire production — from actors and cameras to props and port-a-potties — on small boats in the marsh.

“It was stressful at times,” said Taylor John Smith, who plays Kya’s friend and first love Tate. “But being out in the humidity when the air is super thick and hearing the cicadas and the frogs croaking and seeing snakes and gators come up next to you in the middle of a scene? It was great that we were able to play around in that environment.”

Newman said she has a bit of PTSD from the experience, from chasing the daylight to running from storms. And it felt like a cruel trick when after the rains, they had five days of gorgeous weather but couldn’t film anything they needed to because of all the flooding. 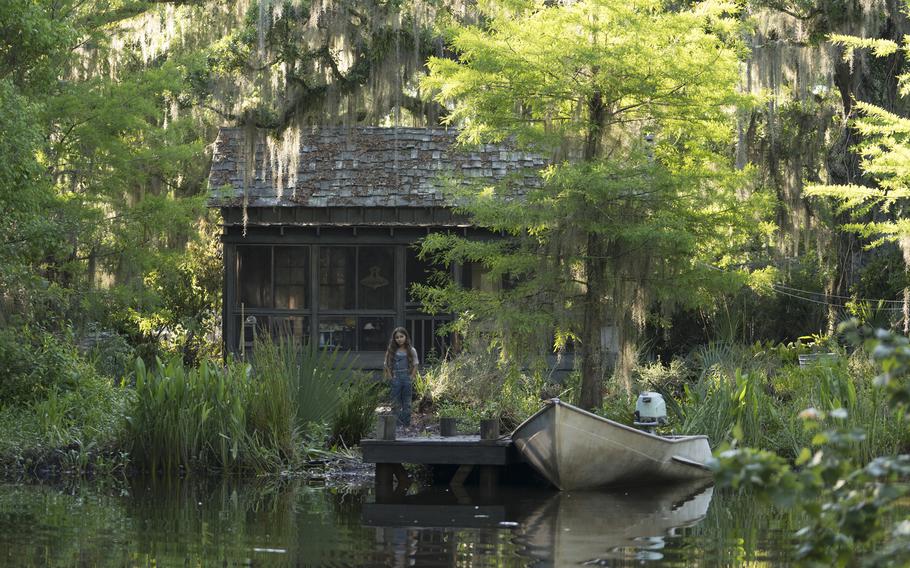 This image released by Columbia Pictures shows Jojo Regina in a scene from “Where the Crawdads Sing.” (Sony Pictures/AP)

“It was very challenging...But at the same time, there was absolutely no way to tell the story without being right there in the environment. It’s as beautiful as it is because we shot on location and dealt with the elements and captured that landscape exactly as it is,” Newman said. “We wanted to lean into the natural beauty of her world, of the marsh, of the swamps and really highlight how beautiful that landscape is without touching it, using natural light and just picking the right time of day to shoot.”

The team spent nine months editing the film and everyone is excited about finally releasing it to the world on the big screen. Newman was heartened to know that Sony Pictures always intended for it to be a theatrical release, which is more and more of a rarity from major studios focused on franchises, tentpoles and superheroes — especially in the summer months.

“I think there’s a real thirst for these kinds of big dramas, romances and suspense movies,” Newman said. “We need more stories like this, and we need more movies like this in the theater."

“I think that there’s a lot to take away from a character like Kya,” she continued. "I think we’ve all felt underestimated. We’ve all felt sort of ostracized for different reasons. She gives us a bit of hope that we’re stronger than we think. This is a time when women especially need to be reassured.”