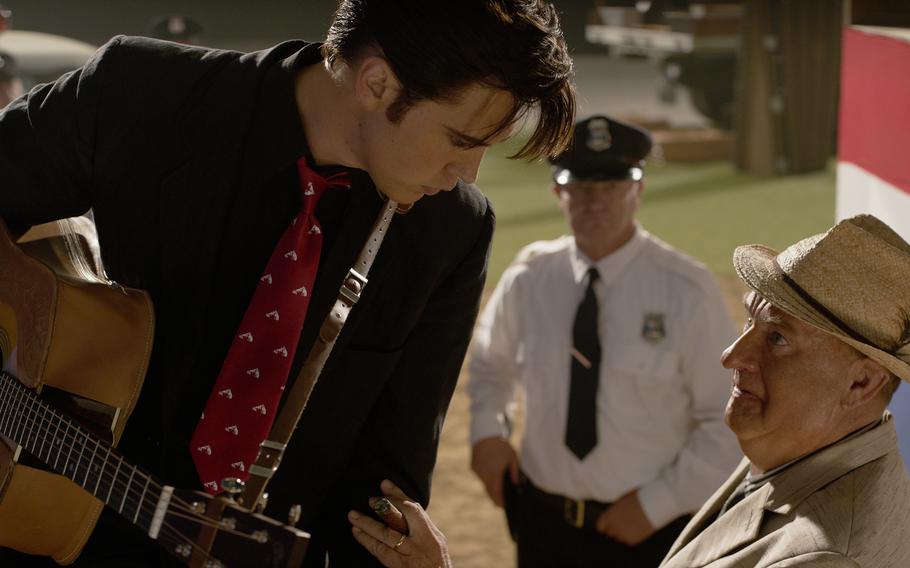 On the day of Austin Butler's final screen test for “Elvis," director Baz Luhrmann threw everything at him.

Butler had spent five months building up to that moment, workshopping the role with Luhrmann, doing hair and make-up tests, rehearsing the songs. Against the odds, Butler had emerged as the unlikely favorite to land the role over more established names like Harry Styles, Miles Teller and Ansel Elgort. But it wasn't official yet.

And during the screen test, Luhrmann flipped the script. Some of the scenes Butler had prepped went out the window. In others, Luhrmann fed him lines from behind the camera. The one minute of “Suspicious Minds" that Butler was to perform in a Presley jumpsuit stretched to six.

“I got home and I really thought: ‘I don’t think I got that. I felt like my hands were tied behind my back,'” Butler said in a recent interview.

A week later in Los Angeles, the 30-year-old actor's phone rang. Luhrmann was calling from Australia.

“I look at the phone and go, ‘OK, this is the moment,’” says Butler. “I pick up the phone and he was very dramatic and downcast. He goes, ‘Austin, I just wanted to be the first one to call you and say ... Are you ready to fly, Mr. Presley?'”

When “Elvis” opens in theaters Friday, it will resurrect one of the most iconic figures in American music in the biggest, most bedazzled film to ever try to capture the King of Rock ‘n’ Roll. And it will propel Butler, an Orange County, Calif., native best known to this point for playing Tex Watson in Quentin Tarantino's “Once Upon a Time ... in Hollywood,” onto a far bigger stage.

“It all feels sort of like this wonderful dream,” Butler said the morning after the film's Cannes Film Festival premiere. “I have to take moments to take a deep breath and say, ‘This is real life.’”

What's real and what's fake in the exaggerated land of the much-imitated Elvis hasn't always been easy to discern. “Elvis,” which Luhrmann co-scripted, doesn't take a standard biopic view of Presley but tells his story through Presley's infamous manager, Col. Tom Parker (Tom Hanks), a former carnival barker who guided Presley to stardom but exploited and manipulated him until Presley's death in 1977. Parker narrates the tale, adding a dimension about the nature of show business and performance.

“Baz in the very first meeting said, ’Look, this is a story about two people. There would have never been an Elvis without a Col. Tom Parker, and, in his own mind, there would have never been a Col. Tom Parker without Elvis,” says Hanks. “As soon as he said that, I thought, ‘Well, this is going to be new turf, and worthy of the Baz-maximalist-confetti-strewn style of moviemaking.’”

And, like “The Great Gatsby” and “Moulin Rouge,” “Elvis” is indeed an extravagant, maximalist Baz-styled blow-out. As you'd expect, it breezes through pivotal moments in the Mississippi-born Memphis singer's life and a jukebox of songs. But “Elvis” also offers a more youthful, rebellious portrait of Presley as a product of Black gospel music, a hip-shaking sex symbol in eyeliner and a progressive-minded nonconformist whose closely controlled career reflected cultural battles of then and now. Butler's is an electric Elvis, not campy nostalgia act, with more Bowie in him than you might expect.

“I’m not here to tell the world that Elvis is a great person. I'll tell you what he is for me," says Luhrmann. “Everyone has their Elvis.”

“My job generally is to take things that are considered either boring or old-fashioned or not relevant and shake off the rust, and recode them” says Luhrmann, maker of the modern-day “Romeo + Juliet.” “Not to change them, just to retranslate them so their value is once again present.”

Presley's value to contemporary audiences, while still beyond most of his contemporaries, has faded somewhat. To many, he represents the appropriation of Black music. Some relatively recent productions — the 2005 Broadway musical “All Shook Up," Cirque du Soleil's Viva Elvis show in Las Vegas — failed to catch on substantially.

All of which meant that Butler had a lot riding on his shoulders. For him, it was essential to find ways to make Presley more human than superhuman. One resonant connection for the actor was learning that Presley's mother died when he was 23, the same age Butler was when he lost his mom. And like Presley, an initially timid performer, Butler grew up shy.

“I could then go: ‘When I feel afraid and I feel like all the pressure’s on me and I’m terrified of falling on my face, he felt those things,’” says Butler. “So then I could go: ‘It’s OK to feel the fear. It’s how you channel it.’”

“Elvis” is most moving in its second half, in the Vegas section of the film, when Presley was often reaching artistic highs on stage during his 1969-1976 run at the International Hotel but was increasingly trapped by Parker (who refused to tour Presley internationally) and drug use. Priscilla Presley, who has enthusiastically supported the film, is played by Olivia DeJonge.

“A lot of the characters in this film are larger-than-life, and authentically larger than life,” says DeJonge. “With Priscilla, I wanted to make sure she felt grounded and more like Elvis’ breath so that whenever he’s with her, he’s relaxed.”

Before “Elvis” began shooting in Memphis, Hanks had dinner with Priscilla Presley, who then described her ex-husband as “an artist as unique as Picasso and as popular as Charlie Chaplin that really only felt truly himself and at home when he was singing."

While a more villainous role represents a rare departure for Hanks — who tested positive for coronavirus during the film's Australia shoot, an indelible early pandemic moment — “Elvis” is also typical for the actor in that it grapples with American history and exists as a standalone drama. “Elvis” will be competing primarily with franchise installments in theaters this summer.

“The concept of franchise now is so much a part of the entertainment industrial complex that for me, I just don’t think it’s very fun," says Hanks. “Everybody knows that I’ve been doing this for an awfully long time so I think they’re going to have just as much faith that they’ll get all three acts out of me, and then they’ll decide if it was worth seeing or not.”

Reviews have been largely positive for “Elvis,” but they've been glowing for Butler. (In the film, he sings some songs while Presley's voice is used in others.) The actor reckons he devoted two years of his life to the film, obsessively researching Presley and gradually transforming into him. Butler went through daily routines wondering how Presley did them. When the movie wrapped, Butler struggled to let go.

“Suddenly it was me brushing my teeth, now it’s me doing these mundane things. It was a real existential crisis when I finished," says Butler. “The next morning, I woke up and I couldn’t walk. I thought my appendix burst. It was the most excruciating pain in my stomach, so they took me to the emergency room. It’s wild how your body can kind of hold on for the duration of doing something.”

The first big scene Butler shot, on the second day of production, was Presley taping his momentous comeback special. The scene put a leather-clad Butler isolated on stage, with little to rely on beside his own ability to thrill a crowd. His nerves nearly overwhelmed him.

“But that terror of my whole career feeling like it was riding on this film, that’s exactly what Elvis was feeling,” says Butler. “His musical career was on the line. It was make or break for him. So I could rest in that. Then I went out there and it was like having an out of body experience."