A Viking epic to conquer them all in 'The Northman’ 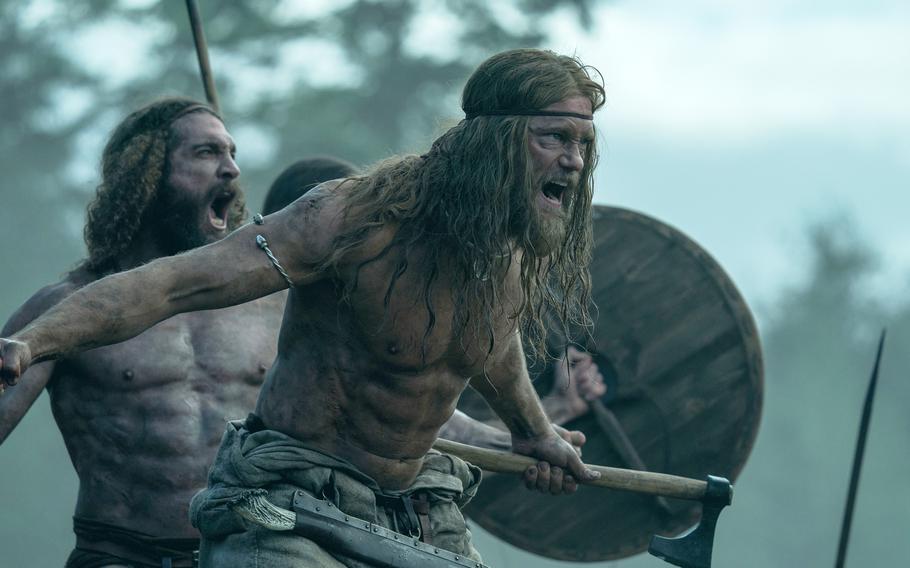 This image released by Focus Features shows Alexander Skarsgård in a scene from “The Northman.” (Focus Features)

Alexander Skarsgård has been dreaming about Vikings for as long as he can remember.

Some of his earliest memories are from Oland, a Swedish island on the Baltic Sea, where his great-grandfather built a home many years ago. His grandfather would regale him with tales of Viking history while walking among the massive runestones.

Skarsgård isn’t entirely sure that his grandfather’s story about a Viking ancestor named Skar who had a farm on the island a thousand years ago is completely true. But it was the kind of thing that was very exciting to him as a young boy. And it was where the seeds were planted for his latest film, “The Northman,” about a self-exiled prince at the dawn of the 10th century. It opens in theaters this weekend.

The Viking dream laid dormant for some time, though. Then around 2017, Skarsgård found himself at a lunch meeting with Robert Eggers, a promising filmmaker who had just burst onto the scene with “The Witch,” an eerily realistic depiction of 17th century New England that helped introduce the world to Anya Taylor-Joy. It was one of those “general meetings” that Eggers dreads.

“You usually just sit down with people and talk about nothing and it’s usually very awkward,” Eggers said. 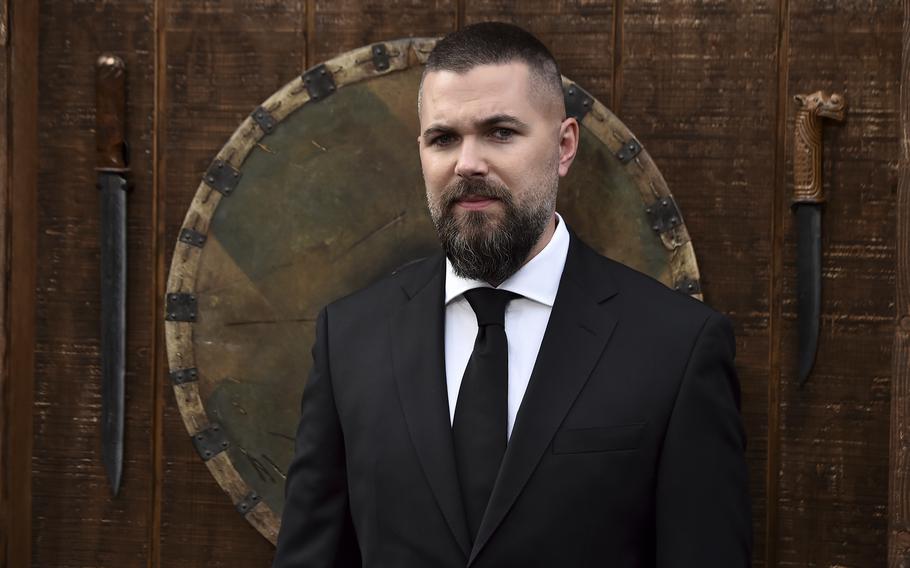 Robert Eggers arrives at the Los Angeles premiere of “The Northman” on Monday, April 18, 2022, at TCL Chinese Theater. (Jordan Strauss/AP)

But it turns out they did have something to talk about. Eggers had recently returned from a trip to Iceland inspired by the grandeur and brutality of the landscapes and armed with classic sagas. By the time they got the check, they’d agreed to make a Viking movie.

“A Viking would definitely say it was fated,” Skarsgård said with a smile. 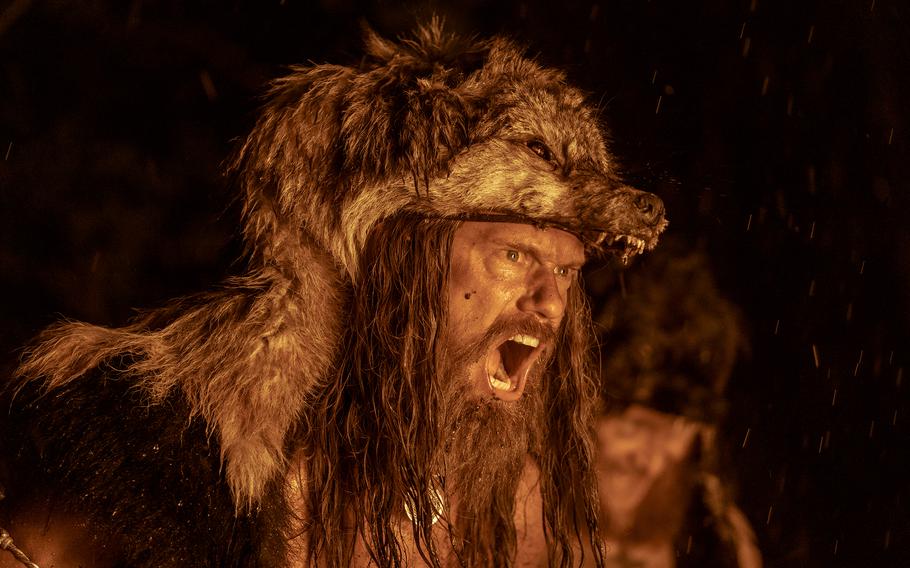 It would send them on their own ambitious quest to create the most historically accurate depiction of Vikings ever.

“In the history of cinema, aside from one tiny Icelandic movie in the late ’70s, no one’s ever tried to make an authentic Viking movie before,” Eggers said. “I had an opening.”

The story of “The Northman” is a familiar one. In his research, Eggers stumbled upon the fact that Shakespeare based “Hamlet” on an ancient Nordic folktale about a prince named Amleth, who sees his father murdered by his uncle, flees and returns as an adult to save his mother and avenge his father. It was the perfect jumping off point to have this simple revenge tale that everyone knows that he could then stuff to the brim with historical details of rituals and weapons and mythology.

With Skarsgård playing the grown Amleth, they rounded out the cast with Nicole Kidman as his mother, Queen Gudrún; Ethan Hawke as his father, King Aurvandil; Claes Bang as his murderous uncle, Fjölnir; and Björk as a seeress. Working with Icelandic poet Sjón to write the script, they wrote one part, Olga — an enslaved Slav who becomes a close confidant of Amleth — with Taylor-Joy in mind. 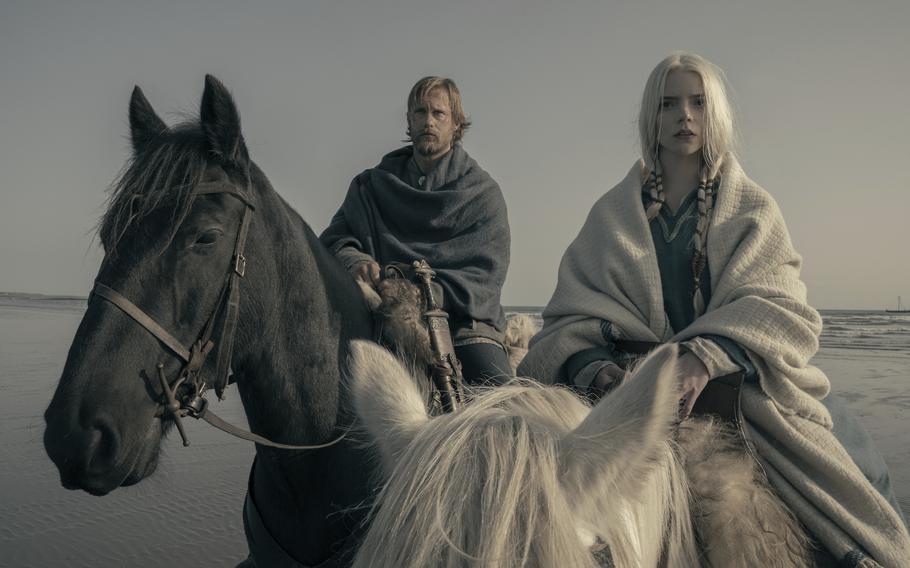 This image released by Focus Features shows Alexander Skarsgård, left, and Anya Taylor-Joy in a scene from “The Northman.” (Focus Features)

“We both know that if we get stuck in a room with a camera, we’re going to end up pushing each other into some weird situations, which is really fun,” Taylor-Joy said.

In addition to getting to go to Northern Ireland and Iceland for the shoot, Olga presented a new opportunity to play someone with a strong tie to a faith.

“You are looking out of your own eyes at whatever situation it is that you’re looking at, but you also have an eye above you that’s overlooking everything like a bird,” she said. “When I think of Vikings, I didn’t necessarily think of the poetry of fate and living your life in this spiritual way. It actually gave me a lot of peace... Not everyone starts laughing when someone is about to slit their throat.”

She wasn’t the only Eggers alum in the bunch. The cast included Willem Dafoe, Kate Dickie and Ralph Ineson, and the crew was largely populated by people from both “The Witch” and “The Lighthouse” including cinematographer Jarin Blaschke, production designer Craig Lathrop and costume designer Linda Muir.

Eggers also recruited a team of Viking historians and archaeologists to help make sure he was doing things right, and, for the first time, he had the funds to do it. They borrowed ships from museums, built some of their own, made weapons by hand and did their best to imagine what the homes would have looked like. Even the rivets were historically accurate.

Before “The Northman,” Eggers’ biggest budget was “The Lighthouse’s” $11 million. This time, he had some $70 million to work with. A bigger budget meant more resources but also more pressure and having to forfeit final cut, although he is quick to say that the film being released is his director’s cut.

The shoot itself was a grueling, muddy, seven-month endeavor during the second half of 2020, before COVID-19 vaccines were readily available.

“We really swung for the fences on this one,” said Taylor-Joy, who recalled being barefoot in the mud while gale force winds threatened to sweep them off the mountaintop. “While almost everyone was very miserable, I was on cloud nine. I was just having the time of my life. I really enjoy being physically pushed.”

Eggers prefers to shoot long takes with only one camera, from seemingly straightforward dialogue scenes to action-heavy set-pieces like a brutal berserker raid. It was enormously taxing on everyone, but they had a shared sense of purpose too.

“We worked on the choreography of it for months before shooting the scene so that we would have the right flow between the camera and the characters moving through the shot,” Skarsgård said. “It was challenging but it was also exciting."

What drove him to keep going, he said, was the hope they were making something unique and that audiences would feel immersed in the action in a way that they never would with hundreds of cuts and post-production fixes.

For him, at least, the result was worth the exhaustion and soreness and all the years he spent talking about a film that would take Norse mythology seriously.

“It’s beyond my imagination, beyond my dreams,” Skarsgård said. “I’m incredibly grateful and immensely proud.”