Yippie-ki-yay: Appreciating Bruce Willis as he retires from the movies 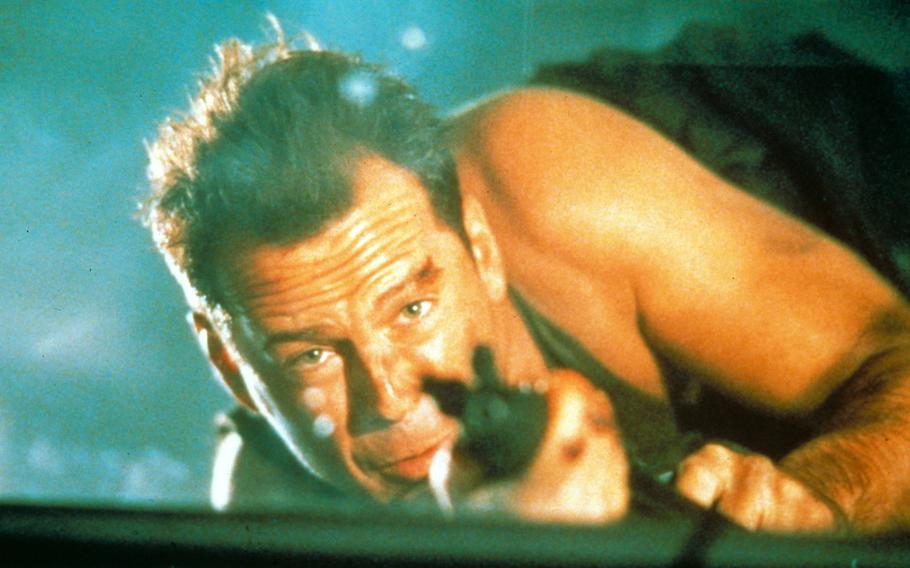 Bruce Willis as New York cop John McClane in 1988’‘s “Die Hard,” a film that set the template for a new kind of action star and made Willis a movie star. Willis’ family announced March 30 that the 67-year-old is retiring from on-screen acting after being diagnosed with aphasia, a disorder in the brain that affects one’s ability to communicate. (Entertainment Pictures, Zuma Press/TNS)

He came to us fully formed, a man.

There were no weird childhood moments or awkward teenage years with Bruce Willis. By the time he was introduced to us on TV’s “Moonlighting,” he was already 30 years old, with a quarter-to-six o’clock shadow on his face and a mischievous glimmer in his eye, and a look like he’d been out having too much fun the night before.

He’s been a steady presence on our screens ever since. Never a chameleon, always Bruce Willis, usually bald or balding, with a gruff charm and a sort of bleak resignation to the world. There is rarely an innocence with him. He’s always looked like he’s seen it all and done it all, and is ready for a break.

He’s getting that break now, professionally speaking. Willis’ family announced March 30 that the 67-year-old is retiring from on-screen acting, after being diagnosed with aphasia, a disorder in the brain that affects one’s ability to communicate.

He leaves behind a screen legacy of more than 100 films, including the “Die Hard” movies, which is what we think about when we think about Willis: a cocky but hardened soul, cool under pressure, but with a top that could blow at any minute.

Willis has never won an Oscar and has never been nominated, but his impact can’t be measured in awards. He’s an actor with a surprising dramatic range who found success in the action, sci-fi, comedy and dramatic fields, who has been a part of several of the most iconic films of the last 40 years. Yippie-ki-yay, indeed.

“Die Hard” set a new template for action movies after the 1988 original propelled Willis to movie star status. These days it exists mostly as a Christmastime argument of whether or not it counts as a seasonal film. (It does, but that’s a discussion for another time, i.e. the holidays.) What that reductive conversation undercuts is “Die Hard’s” sheer perfection as an action film, and Willis’ crack performance at the center of it.

When “Die Hard” came along, action stars didn’t look like Willis, they were pumped-up He-Men like Arnold Schwarzenegger and Sylvester Stallone. Willis brought an everyman quality to his performance as John McClane, a New York City cop visiting his wife in L.A. for Christmas, who winds up at the center of a terrorist takeover in a partially under-construction highrise.

He’s agile and quick on his feet, sure, but he’s more reliant on his wits than he is his muscles to get out of the pickle he finds himself in. “Die Hard” was the No. 7 grosser of the year, pulling in $83 million at the box office, but it would go on to become one of the most studied and copied films of all-time after its release on home video, leaving an entire genre of “Die Hard” clones in its wake. Others did it well, but no one did it as good as Willis.

“Die Hard 2” followed in 1990 and holds up remarkably well, even though it’s overshadowed by its predecessor. (“Die Hard With a Vengeance,” from 1995, has its moments, but neither 2007’s “Live Free or Die Hard” or 2013’s “A Good Day to Die Hard” need to be unwrapped from their box set packaging.)

Willis spent the early ‘90s in a series of misfires, including “The Bonfire of the Vanities” and “Hudson Hawk,” which took their toll on his starpower and newfound clout. (An exception is “The Last Boy Scout,” Tony Scott’s hard-boiled action buddy film, in which he stars as a self-loathing detective who teams up with a hot-shot quarterback to take down a ring of crooked politicians. Willis’ character dances a jig at the end of the film, and it’s one of his finest moments on film. Go watch it.)

By 1994 Willis was due for a comeback and he got one playing boxer Butch Coolidge in “Pulp Fiction,” Quentin Tarantino’s sprawling L.A. comic action gangster opus, which pretty much rewrote the rules for films going forward. Willis is an ensemble player in the movie, which showed his willingness to be part of a team rather than the out-front star, and he’s rewarded with several of the movie’s juiciest moments. “Pulp Fiction” is unthinkable without Willis’ contributions, especially the way he silently tests out a series of weapons before going to rescue his nemesis in the backroom of a nightmare pawn shop.

Willis remained a force in the ‘90s, balancing quirky action roles (“The Fifth Element”) mind-bending sci-fi (“12 Monkeys”) and small supporting work (the underrated “Nobody’s Fool”), and closing out the decade with the one-two punch of “Armageddon” (macho oil drillers exploding an asteroid in space, glorious) and “The Sixth Sense” (where, spoiler alert, he’s the subject of the film’s signature line). The M. Night Shyamalan showstopper ushered Willis into the next decade, and he carried “Unbreakable” for the director, starring in the superhero origin film and much later its follow-up, 2019’s “Glass.” 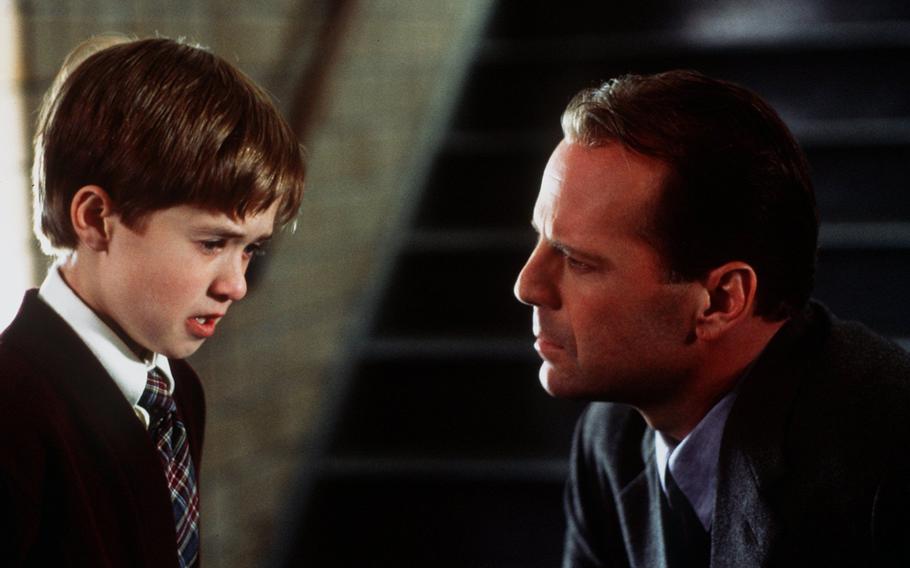 Bruce Willis talks with Haley Joel Osment, left, in a scene from the 1999 M. Night Shyamalan film “The Sixth Sense,” which ushered Willis into the 2000s. Willis also starred in “Unbreakable” and “Glass” for the director. (Spyglass Entertainment/TNS) 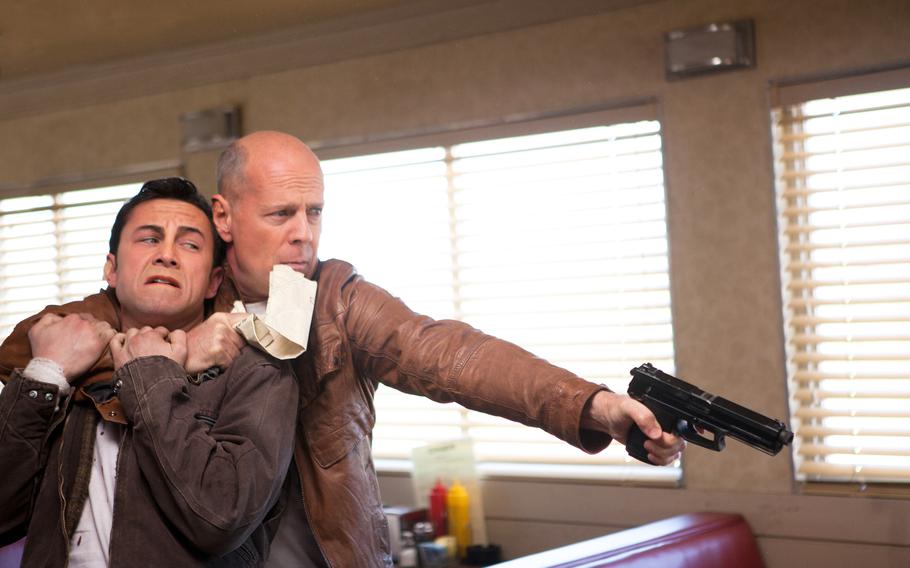 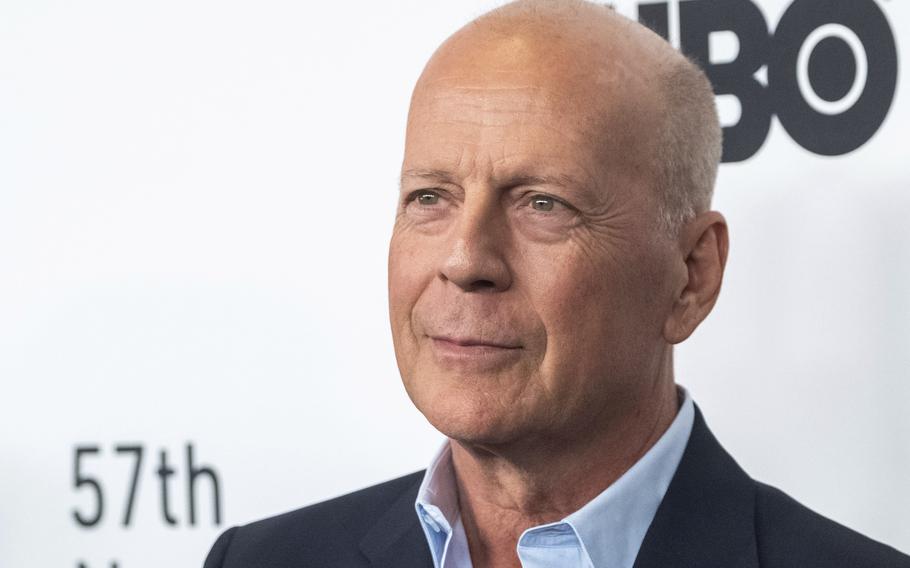 Bruce Willis attends a movie premiere in New York on Friday, Oct. 11, 2019. A brain disorder that leads to problems with speaking, reading and writing has sidelined Willis and drawn attention to aphasia, a little-known condition that has many possible causes. (Charles Sykes, Invision/AP)

Willis has had a slew of other notable roles, including in Robert Rodriguez’ comic book come to life “Sin City,” Rian Johnson’s time-hopper “Looper” and Wes Anderson’s sweet comedy “Moonrise Kingdom,” and he even took his place among action star royalty by appearing alongside Schwarzenegger and Stallone in “The Expendables” and its sequel. He always showed off his goofy side during appearances on David Letterman’s show, often showing up in costume.

Recent years have seen Willis flooding the straight-to-DVD market with a series of generic one-off action movies with names like “Survive the Night,” “Survive the Game,” “Hard Kill” and “Deadlock.” These quickie titles, frequently made with the same collaborators, earned him his own category at this year’s Razzie Awards, “Worst performance by Bruce Willis in a 2021 movie,” which was rescinded after the aphasia announcement (but still makes the Razzies organizers seem like jerks). Nonetheless, Nic Cage too went through his take-every-movie-in-sight phase and is now coming out of it renewed and refreshed, a cult hero. With news of his retirement, Willis won’t get to enjoy a similar moment.

But Willis has never been as unpredictable or as showy as Cage. He’s always been grounded and a little reserved, and he’s been such a steady presence for so long that we’ve come to take him for granted. It took last week’s announcement to wake us up to the breadth of this man’s work and what he’s given over the years. So go ahead, Bruce, and dance that jig. You’ve earned it.