What deserves to win at the 2022 Oscars 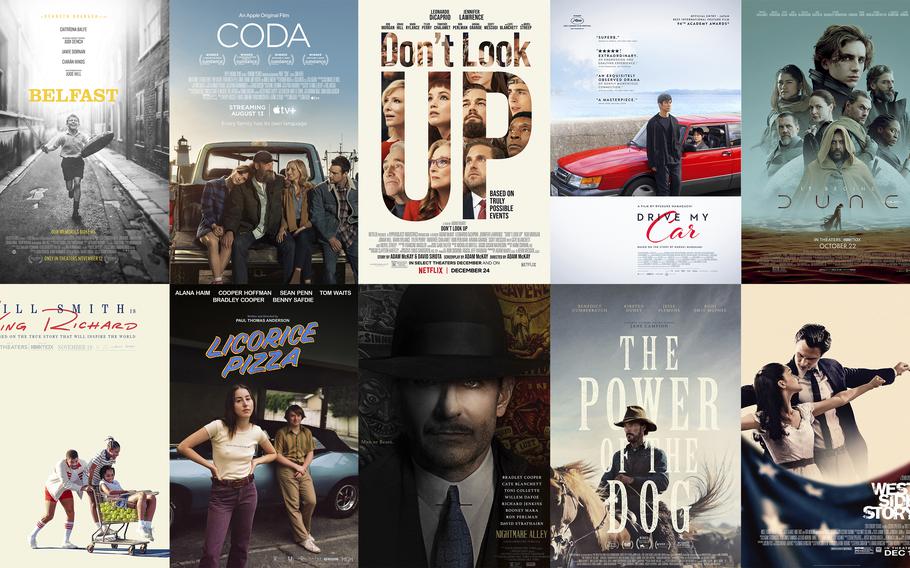 This combination of photos shows promotional art for the films nominated for an Oscar for best picture, top row from left, “Belfast,” “CODA,” Don’t Look Up,” Drive My Car,” Dune,” bottom row from left, “King Richard,” Licorice Pizza,” “Nightmare Alley,” “The Power of the Dog,” and “West Side Story.” (AP)

If I were a voting member of the motion picture academy (and don't worry, I'm not), the following represents how I'd cast my ballot in 11 key Oscar races. I hasten to add that while these choices represent my personal favorites among the nominees, only a few of them represent my actual favorites of last year.

Even as the COVID-19 pandemic continued to thwart the movie industry in 2021, it was a nonetheless a superb, resurgent year for movies. As such, its riches are only fitfully represented by an organization that despite its welcome and ongoing steps toward broadening and deepening its global membership, remains strikingly indifferent (or wholly oblivious) to some of the strongest movies being made, especially by American independent filmmakers and those the world over.

There was one glorious exception: a brilliant, boundary-shattering movie that, in a different year, might have stayed under the radar. Happily, it received its partial due from the academy this year with four Oscar nominations, including best picture, which it thoroughly deserves to win. And so, without further ado … 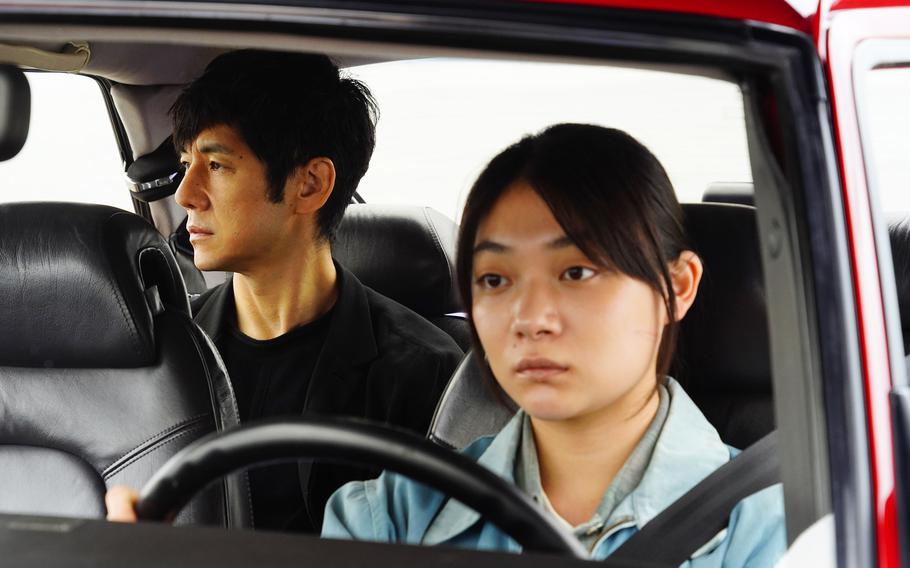 Hidetoshi Nishijima, left, and Toko Miura in a scene from “Drive My Car.” (Janus Films and Sideshow )

"The Power of the Dog"

"The Power of the Dog" has been in the fast lane all season, although some observers have suggested that "CODA," with its surprise Screen Actors Guild ensemble win, might be flooring it in the final stretch. I'm not usually this prone to vehicular metaphors, but they feel like a fitting segue to my point, which is that "Drive My Car," Ryûsuke Hamaguchi's magnificent and moving Haruki Murakami adaptation, is the best of this year's nominees by a mile. Its presence in this category will surely be seen as reward enough, but it isn't, not even close; it deserves to win. After "Driving Miss Daisy" and "Green Book," isn't it time the academy honored a legitimately great movie about people unexpectedly bonding during car rides?

Should win: "Drive My Car" 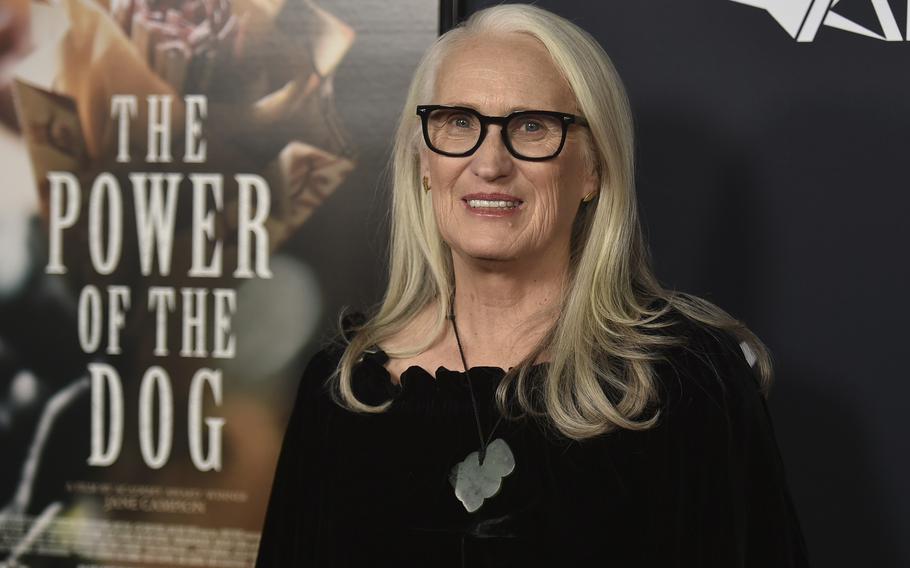 Jane Campion, "The Power of the Dog"

Ask me another day and I might say Hamaguchi, one of the most exciting talents to emerge in recent years, but today my vote goes to a great, endlessly influential filmmaker operating at the peak of her powers. Even without the juicy prospect of seeing Campion beat Spielberg almost three decades after their initial go-round (the year of "Schindler's List" versus "The Piano"), it would be enormously satisfying to see her finally get her due for a movie that balances superior acting with technical rigor, that feels both meticulously constructed and intensely, wildly alive.

Should win: Jane Campion, "The Power of the Dog"

Nicole Kidman, "Being the Ricardos"

The hardest acting race to predict or judge, though I could easily build a case for Colman, who remains clearly incapable of an unnuanced moment, and also for Stewart, doing the rare virtuoso celebrity impersonation that reveals the hollowness of most celebrity impersonations. But it's the quiet sublimity of Cruz's work in "Parallel Mothers" that I keep returning to; Pedro Almodóvar has always pushed her to new heights, and what she manages here is fully equal to what Antonio Banderas achieved in "Pain and Glory": acting that feels like a pure, effortless state of being. She's never been better. It's hard to think of many who have.

Javier Bardem, "Being the Ricardos"

Benedict Cumberbatch, "The Power of the Dog"

Denzel Washington, "The Tragedy of Macbeth"

The brilliance of Cumberbatch's performance isn't just that he's a great actor; he's a great actor playing a great actor, a man of thwarted, anguished desires who's persuaded himself to don the chaps of a Montana cowboy and play the role as if his life depended on it. It's those interlocking layers of deceit that make Phil Burbank such a terrifying, ultimately tragic figure and "The Power of the Dog" such an incisive dismantling of performative masculinity. Smith has considerable momentum for his justly celebrated (and SAG-winning) turn as Richard Williams, who's domineering and manipulative in his own ways but utterly guileless by comparison. They're both great, gale-force performances — but I know which one I'm still turning over in my head months later.

Should win: Benedict Cumberbatch, "The Power of the Dog"

Kirsten Dunst, "The Power of the Dog"

DeBose put a spectacular song-and-dance stamp on a beloved (and past Oscar-winning) role; Buckley managed the near-impossible feat of keeping emotional pace with Colman; and Ellis held the moral center of "King Richard" with warmth and ferocity. But speaking of moral centers: Amid the turbulent male waters of "The Power of the Dog," it's Dunst's frontier widow-turned-bride who most acutely registers the human toll of this movie's brutal emotional warfare. To watch her face twist into a mask of silent agony is to be reminded of her great performances in films like "Melancholia" and "The Beguiled" — and to be startled anew that this is somehow only her first nomination.

Should win: Kirsten Dunst, "The Power of the Dog"

Jesse Plemons, "The Power of the Dog"

J.K. Simmons, "Being the Ricardos"

Kodi Smit-McPhee, "The Power of the Dog"

I like to spread the wealth, honest, and I was as moved as anyone by Kotsur, who's likely to make history as the first Deaf man to win an acting Oscar. But the three central performances in "The Power of the Dog" are vivid, layered and inextricable from each other in ways that finally overwhelm their competition (and make abundantly clear why Campion should be unbeatable in the directing race). As a calculating young medical student who plays it extremely close to the vest while rocking his white shoes, Smit-McPhee dissects his own role with aptly surgical precision — and meets Cumberbatch fearlessly head-on in the year's most riveting psychological duet.

Should win: Kodi Smit-McPhee, "The Power of the Dog"

Eskil Vogt and Joachim Trier, "The Worst Person in the World"

The two strongest nominees, "Licorice Pizza" and "The Worst Person in the World," both happen to be portraits of marvelously restless young women zigzagging their way toward uncertain romantic, creative and professional futures. It's practically a toss-up, though I'd cast my vote for Vogt and Trier, whose multi-chaptered script is so achingly perceptive about the undeniablity of what the heart wants — and the inconvenience of when it wants it.

Should win: Eskil Vogt and Joachim Trier, "The Worst Person in the World"

Jane Campion, "The Power of the Dog"

The three standouts are all marvels of psychological interiority; Campion preserved the roiling desires at play in Thomas Savage's novel, while Gyllenhaal wrung nonstop tension from Elena Ferrante's tale of maternal ambivalence. But it was Hamaguchi and Oe who did the most inventive and expansive work, elaborating at length on a Murakami short story, weaving in perfectly judged swaths of Chekhov and emerging with a script that understands the power of words and silences equally. Call it the year's most original adapted screenplay.

Should win: Ryûsuke Hamaguchi and Takamasa Oe, "Drive My Car"

"The Hand of God"

"Lunana: A Yak in the Classroom"

"The Worst Person in the World"

Should win: "Drive My Car"

"Summer of Soul ( … or, When the Revolution Could Not Be Televised)"

Happily, there is nothing as wretched as last year's winner, "My Octopus Teacher," in this year's lineup. Every one of these nominees has something to recommend it: the piercing intimacy of "Flee"; the startling observational rigor of "Ascension"; the inspiring shoe-leather grit of "Writing With Fire"; the through-the-rafters exuberance of "Summer of Soul." My vote would go to "Attica," Stanley Nelson's methodical and monumental reconstruction of a 1971 prison uprising and the senseless, horrific display of state brutality that followed. It's a searing work from one of the most vital and under-heralded of American nonfiction filmmakers.

"The Mitchells vs. the Machines"

"Raya and the Last Dragon"

"Flee" is the first film to receive nominations for international feature, documentary feature and animated feature. This is the race in which I'd like to see it prevail, and not just because the animated category is overdue for a winner that isn't a big-budget computer-animated mainstream offering. It's also because Jonas Poher Rasmussen's quietly heartrending refugee saga feels both singular and stirringly emblematic of this strong field of nominees, each of which is rooted to some extent in the imperfections of family and the longing for something like home.