The ridiculously entertaining 'Murderville' is the perfect Netflix binge 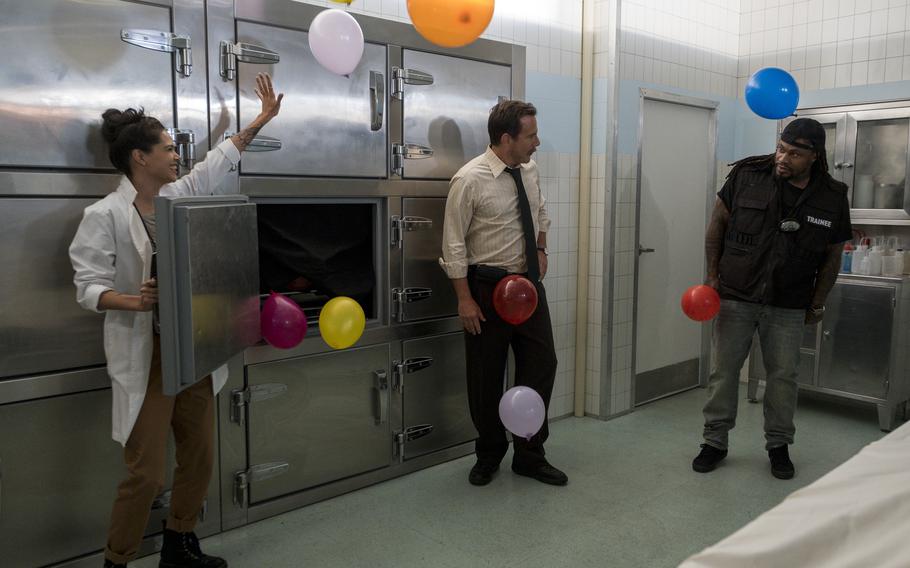 Left to right: Lilan Bowden, Will Arnett and Marshawn Lynch get in on the silly murder mystery fun in “Murderville,” now streaming on Netflix. (Netflix)

Someone’s been murdered. Homicide Det. Terry Seattle (Will Arnett) is on the case. Solving the crime won’t be easy, especially for his “new” partner, a real-life celebrity with no script and often no idea what’s going on in the ridiculously entertaining “Murderville,” Netflix’s six-part comedy where improv meets murder-mystery dinner theater meets every rote cop show of the past 40 years.

Each episode of the series features a new mystery and a new guest star who’s paired up with the hard-knock detective Seattle by his precinct captain and estranged wife (Haneefah Wood). The “team” is assigned a case, and the fun is watching personalities like Conan O’Brien, Sharon Stone, Marshawn Lynch and Ken Jeong fumble their way through a narrative where they’re the only ones on set without a script. They “investigate” crime scenes, grill suspects and put up with Seattle’s bizarre methodology for 30 minutes. At the episode’s close, they’re asked to identify the killer from a lineup of three suspects. Then the captain reveals if they got it right or wrong.

The show, which also features Kumail Nanjiani and “Schitt’s Creek’s” Annie Murphy, throws curveballs after red herrings at its unsuspecting guests, putting them on the spot when they’re asked to go undercover on their own, with Seattle feeding them lines through a hidden earpiece. Some of the best comedic moments come out of the folks who aren’t from the comedy world: Lynch as a poker dealer who has no idea how to dole out cards. Stone flat-out refusing to do what Seattle asks, turning the tables so Arnett is left dangling.

As the grizzled detective who hasn’t recovered from the loss of his old partner (a picture of Jennifer Aniston in a cop uniform hangs in his office), Arnett is an endless font of idiotically funny police tropes and lonesome loser satire. He pivots on the fly, challenging his “partner” to an ad-lib duel, often causing them to break character, laugh or ask what the hell is going on.

“Murderville,” which is based on the BBC Three series “Murder in Successville,” is a pandemic production. It looks as though each scene was done in as few takes as possible, and the sets look like a production office, someone’s living room or perhaps the parking area behind the soundstage. The unremarkable locations make the players the center of attention in a series that emulates the feel of local theater and sketch comedy.

Audiences have the choice to look for clues along the way, but the show’s executive producer Arnett is a master in the art of distraction, which makes it difficult for viewers — and the show’s guest stars — to focus. Just try and remember which one of the triplet suspects was left-handed, or who was a terrible speller, after laughing through Arnett’s “Baretta”/“CSI”/“NYPD Blue” shtick. “Murderville” isn’t afraid to be an imperfect, silly mess, which is why it’s the perfect escape for messy times.